Shabbat Under the Stars 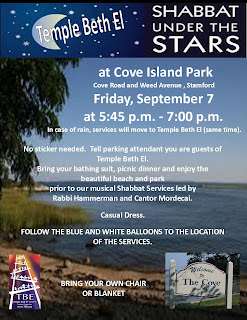 From the Stamford Advocate - Selichot and Pharaoh's Daughter 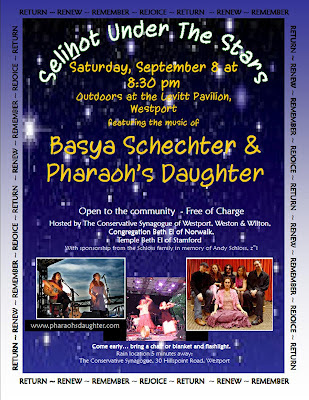 Jewish community to gather for reflection

The Conservative Synagogue of Westport, Weston and Wilton, in collaboration with Congregation Beth El of Norwalk and Temple Beth El of Stamford, are co-hosting a special service under the stars at the Levitt Pavilion in Westport on Saturday, Sept. 8, at 8:30 p. m. Headlining the program is a special musical presentation by highly acclaimed artist Basya Schechter and her band Pharaoh's Daughter.
The band, Pharaoh's Daughter, is described as "a blend of psychedelic sensibility and a pan-Mediterranean sensuality, through swirling Hasidic chants, Mizrachi and Sephardi folk-rock, and spiritual stylings filtered through percussion, flute, strings and electronica."
The sound has been cultivated by Schechter's Hasidic music background and a series of trips to the Middle East, Africa, Israel, Egypt, Central Africa, Turkey, Kurdistan and Greece.
The clergy from all three synagogues will be officiating at service: Rabbi Jeremy Wiederhorn and Cantor Laura Berman of The Conservative Synagogue of Westport, Weston, and Wilton; Rabbi Joshua Hammerman and Cantor George Mordecai of Temple Beth El of Stamford; and Rabbi Ron Fish of Congregation Beth El of Norwalk.
"Throughout the High Holiday season, we gather with our respective communities under the roof of our synagogue buildings. This year we decided to join together with the larger community `under the stars' as we usher in the Days of Awe with a special musical Selichot experience," Wiederhorn said.
"This collaborative effort in a spectacular venue should make for a spiritually moving evening."
Selichot are Jewish poems and prayers for forgiveness traditionally recited in the period leading up to the High Holidays (Rosh Hashanah and Yom Kippur). As the Jewish month of Elul draws to a close, the mood of repentance becomes more urgent. The first Selichot service of the holiday season is typically a large, community service held before Rosh Hashanah.
"I'm thrilled that our three Conservative congregations will be coming together in celebration, reflection and song, marking a new phase in the growing connection between the Jewish communities of Fairfield county," Hammerman said.
"This sacred season is a time for individual reflection, for families to come together and for our various communities to swell with worshippers," Fish said.
"What makes our area so special is that we also have the opportunity to join together with our fellow Conservative synagogues throughout Fairfield County to share our common goals and dreams for the coming year."
The event is sponsored, in part, by members of The Conservative Synagogue, the Schloss Family in memory of their son, Andrew Schloss, a columnist and sportswriter for The Wilton Bulletin. He died in 2008 following a seven-month battle with leukemia. He was a resident of Wilton.
The evening is free and open to the public. Blankets or chairs and a flashlight are recommended for this outdoor event. In case of rain, the event will take place at The Conservative Synagogue on 30 Hillspoint Road in Westport. For information, call 203- 454-4673 or visit: www.tcs-westport.org. For information about the band visitwww.pharaohsdaughter.com

I'm sitting at a cafe late on Tuesday night, another glorious cool evening in Jerusalem. We arrived in Israel on Monday and although we've in Jerusalem for only 28 hours, it seems like we've been here forever. Or, to be more precise, 3,000 years. The city really comes alive after the fast days of early tonid summer, and this week it seems more alive than ever. The cafes are packed, the people are in good spirits and despite the tensions raging in their volatile neighbourhood there is no palpable tension to be felt here. The only downer is that there were no Olympic medals (though they've taken great pride in Aly Raisman's feats ( see my Times of Israel  commentary at  http://blogs.timesofisrael.com/aly-raisman-our-hava-nagila-hero/ )

From the photos, you'll see that we've thus far visited the Ayalon Institute -  a pre state clandestine bullet factory and then we planted trees at a spot about half way between Tel Aviv and Jerusalem.  We arrived in Jerusalem last night.  This morning we descended to the City of David and Hezekiah's water tunnel and then explored the Jewish and Christian quarters.  This afternoon we sifted through the archaeological remains of the Tempe Mount and helped to uncover three millennia of Jewish and world history.  Everyone is having as wonderful time!

See the photos that I've managed to upload so far
2012TBEIsraelAdventure

Who knew that the entire Jewish world would go gaga because an 18 year old gymnast decided to do her floor routine to one of the most parodied, kitschy songs ever written: Hava Nagila. Aly Raisman could have picked so many other beautiful, catchy Jewish songs.  True, most people would not have known they were Jewish.  As Hava Nagila expert Dr. James Loeffler has said, this song is one of the first three things people know about Jews.“They know about Israel, they know about the Holocaust and they know about ‘Hava Nagila.”
The question is, do we truly want to be associated with Hava Nagila?
Well…yes.
As Loeffler has written, this song is the perfect blend of the biblical, traditional, and modern Zionist.  The melody began as a Hasidic niggun which morphed into a modern Hebrew folk song.  How many songs can you think of that have been been greatest hits both in the shtiebel of the shtetl and the kibbutz mess hall?  But that’s precisely what happened with this song, which has unified the Jewish people almost as much as the Sh’ma and Hatikva…. come to think of it, when have your ever heard Hatikva played at a Bar Mitzvah reception?  But like clockweork, there is Hava Nagila, every time, somewhere between “Coke and Pepsi” and Aunt Bessie’s appearance at the candle lighting ceremony.
Yes it’s been parodied more than Sammy Davis Jr.  Allan Sherman’s “Harvey and Sheila“ uses the song as a vehicle to parody American Jewish culture as a whole.  On “Laugh In,” they sang, “Hava nagila, have two nagilas, have three nagilas, they’re pretty small.”
But any melody that could bridge the worlds of Hasid and Halutz has a power that transcends parody.  Hava Nagila’s impact has not been pretty small.
And last week, when Aly completed her final routine and then dedicated her gold medal to the slain Israeli athletes of Munich, I found myself crying to the kitschiest song ever written.  Hava Nagila had itself taken a gymnast’s leap from being a source of parody to becoming source of pride.
At its root, Hava Nagila expresses the Jewish resilience and our love of life, our age-old ability to turn sorrow into song.  The lyrics, written in the early 20th century by  Jewish musicologist Avraham Zvi Idelsohn, are based on Psalm 118:24, “This is the day of the Lord, let us rejoice (Nagila V’nismecha) in it.”  Turns out Jews have as many synonyms for joy has Eskimos do for snow.  These words also resonate through theseventh blessing of the Jewish marriage ceremony.   As they wept over the ashes of the still smoldering second temple, the rabbis were able to imagine a scenario of gladness, joy and mirth.  It is all about embracing life.  Despite our reputation for being a depressive people, we are capable of being both Jewish and joyish.  Hava Nagila is the proof that we can take “Yes” for an answer.
Plus, life cannot be celebrated in isolation.   Aly Raisman chose Hava Nagila because of her Jewish roots, but also because it invites – no demands – audience participation. People are compelled to clap to it, even if only to try to drown it out.  Hava Nagila is, at its essence, a prayer and for Jews, prayer is a team sport.
So now, Aly has become Sandy Koufax, and Hava Nagila is no longer just that cheesy bar mitzvah song.  It has returned to its own roots.  It has become a psalm again.
Posted by Joshua Hammerman No comments: