Reviews and Endorsements for "Embracing Auschwitz" 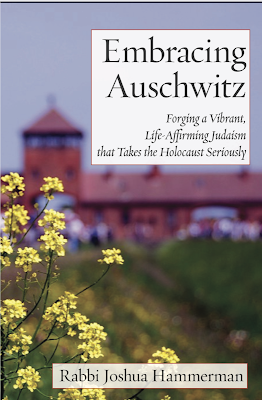 The Judaism of Sinai and the Judaism of Auschwitz are merging, resulting in new visions of Judaism that are only beginning to take shape.

Each of the chapters of this book outlines an aspect of this work-in-progress, this Torah of Auschwitz, and we will see just how the ways of Sinai are being recast, the old wells re-dug.

Jewish survival will not be assured until the grandchildren of survivors and others of their generation can begin to take the darkness of the Shoah and turn it into a song, absorbing the absurdity of a silent God while loving life nonetheless.

“As the Holocaust shifts from living wound to fitful memory, the urgent question is not just how to remember but why. In Embracing Auschwitz, Rabbi Joshua Hammerman gives us a compelling and provocative answer. His ‘Torah of Auschwitz’ celebrates the life-affirming values of heroism, persistence, faith, Jewish unity and defense, and universal justice.  Embracing Auschwitz is an essential contribution to our understanding of what we as a people need to carry from the 20th into the 21st century.”
—Yossi Klein Halevi,
Senior Fellow, Shalom Hartman Institute, Jerusalem
author, Letters to My Palestinian Neighbor

“I hate the title of this book and there are tens of passages which make me wince and grit my teeth in order to go on. Yet this is an important book and should be read by every Jew who cares about Judaism—because its central point is true and it offers wisdom to guide us into the Jewish future. Hammerman’s fundamental thesis is that the Holocaust must be incorporated into the fabric of Jewish religion. Our understanding of every tradition and ethical commandment must be reshaped by its light. This book shows how to do this. Thankfully, he makes clear that the correct application of this concept is not to magnify death and the feeling of victimization. Rather it is to respond with greater intensity of human responsibility and to savor life even more for its fragility and vulnerability. This is not to mention other exciting challenges in the book. Take his bold proposal—for the sake of creating an indissoluble bond—to grant every Jew in the world a vote in Israel. I don’t agree but this is a proposal that makes waves and is worth fighting over. In short, damn the torpedoes and wrecks along the way. Full speed ahead. Read this book. Criticize its faults. Absorb its truths. The life you inspire may well be your own.”
—Rabbi Dr. Irving “Yitz” Greenberg,
founding director of the President’s Commission on the Holocaust,
Chair of the Holocaust Memorial Museum
founding President of the Jewish Life Network

“With immense insight and unstinting honesty, this work looks hard at the Holocaust’s enduring meaning for Jewish identity and the world. In examining the past in all its complexities, Rabbi Hammerman suggests a hopeful path for our complex Jewish community. Like many of Rabbi Hammerman’s sermons and other writings, it is eye opening and thought provoking. Embracing Auschwitz will make you think and feel—no walk in the park, but a journey well worth taking and embracing.”
—U.S. Senator Richard Blumenthal

“A powerful meditation on what Judaism could be in this time.”
—Peter Beinart, author, The Crisis of Zionism

“Starting with a jarring book title, Joshua Hammerman captures our imagination and re-pivots our approach to dealing with the horrors of the Holocaust. As a gifted journalist and spiritual leader, he makes his case with a clear voice and open heart, showing us that we can fulfill the biblical mandate to ‘choose life’ by doing so with new forms of joy and sanctity. Hammerman’s brave new vision challenges us and demands our attention.”
—Gary Rosenblatt, Editor At Large, The Jewish Week

WINCHESTER, California – The title of Joshua Hammerman’s book Embracing Auschwitz is incredulous. How can a rabbi, a pulpit rabbi charged with comforting his congregation, in light of the continental genocide and devastation inflicted on so many families, known as the Holocaust, and understanding the Jewish nation has a God-given obligation to obliterate the Amalekites, the biblical archetype of evil, ask us to accept and welcome this malevolence? The conundrum is resolved before one begins to read a single chapter. Hammerman, stressing there is nothing positive about the Holocaust, invokes his interpretation of the word “embrace” by quoting Abraham Joshua Heschel: “There are three ways we respond to sorrow. On the first level, we cry; on the second level, we are silent; on the highest level, we take sorrow and turn it into song.”

The Torah of Sinai demands that Jews live, meaning remain alive, through its laws and ordinances (Leviticus 18:5). The Torah of Auschwitz perceives this decree differently, it’s not about living. Hammerman tells the story that during a Cholera epidemic in 1848, Rabbi Israel Salanter, directed his followers to disregard the fast of Yom Kippur to preserve their health, and “famously, ate in front of them.” According to Hammerman, Hitler believed Darwinism meant the strongest survive. He was in error. Darwinism says the adaptable survive, and so does the Torah of Auschwitz. ”

Sean Spicer, first press secretary in the Trump administration, in January, 2017, at the very beginning of that administration, stressing the depravity of Syrian leader Bashar al-Assad for using chemical weapons against his own people said, “We didn’t use chemical weapons in World War II. You know, you had someone as despicable as Hitler who didn’t even sink into using chemical weapons,” which of course he did—Zyklon B—against civilian, particularly the Jews in Auschwitz. The Torah of Sinai, through rabbinic commentary, argues there are seven types of thieves, the worst is one who deceives people. The Torah of Auschwitz, saying Holocaust denial is the worst—it is the “canary in the coal mine”—demands the commandment to eradicate Amalek is really “about keeping alive the memory of the Holocaust.”

One more illustration. The Torah of Sinai requires separation, whether the little known commandment not to blend wool and linen in the same garment (Leviticus 19:19), or the profound segregation of people into “the chosen” and “not chosen.” Hammerman writes, “The Torah of Auschwitz compels us to eradicate those boundaries. I believe we have entered a world of connection rather than separation and distinction.” He calls it moving on from kosher (separation) to kesher (bridge); from the old and the new.

The Appendix, presenting a digest, a summary, of forty-five “mitzvot” gleaned from the Torah of Auschwitz, insists, as Hammerman adeptly notes, that because the history we call the Holocaust is at the heart of being Jewish, the first obligation of Jews is embracing the role to be “surrogate witnesses as the last of the actual witnesses, the survivors, depart. Embracing Auschwitz is a skillfully-crafted argument to do more than “never forget,” it demands we actively “Remember”.

Fred Reiss, Ed.D. is a retired public and Hebrew school teacher and administrator. His works include: The Comprehensive Jewish and Civil Calendars: 2001 to 2240; The Jewish Calendar: History and Inner Workings, Third Edition; and Sepher Yetzirah: The Book That Started Kabbalah, Revised Edition. He may be contacted via fred.reiss@sdjewishworld.com.