This summer I made pilgrimage to the 9/11 Memorial Museum - my first such visit since it was completed - to relive that tragic day, now nearly 15 years ago.  Part of the museum is dedicated to tracing the roots of the hatred that would drive normal human beings to such rabid insanity as to murder thousands of innocents in cold blood.  The  recent death of Elie Wiesel is a reminder that we are all witnesses to such infamous events, and the passage of time should only intensify our resolve to keep alive the memory of those who perished.  To stand at that subterranean spot, deep within the footprint of the Towers, inhaling the sacred dust bearing the pulverized bones of 2753 victims, is a shattering experience.  But it is only the beginning of the journey.

After visiting the memorial, I ascended to the top of the Freedom Tower, and there took in a view that I hadn’t seen since a year before 9/11, when I performed a wedding at “Windows on the World,” the swanky restaurant that stood atop the North Tower.  There was no view like it back then, and now we've reclaimed our corner of the sky.


As I looked out from my Freedom Tower perch in mid August, it occurred to me that the heavens were as deep-blue as on that fateful September day, 15 years ago. Or at least as I recall it.   An entire wall of the 9/11 Museum is filled with ceramic tiles in various shades of blue, the color of that sky as conjured through the dusty memory of those who saw it.  No one can recall the exact shade, and shade itself shifted, but it is simply remembered as the bluest blue people had ever seen; a blue that was soon eclipsed by billows of back smoke and ash funneling through the human canyons.

The Midrashic collection Sifrei Numbers, in describing the elusive blue fringe designed to help Jews remember the commandments, explains the sybolism of that color:  "A thread of blue: blue like then sky, blue like the sea, blue like the divine throne."

Centuries ago, Jews stopped trying to recall that exact shade and abandoned the blue thread altogether - though now some have revived the custom - but for 9/11 survivors, which to a degree all of us are, that deep blue sky remains an important touchstone, something to help us raise our eyes heavenward again, to hope, to climb and to envision the kind of harmony that only God can imagine, something to remind us of the peacefulness and order that existed at the dawn of that day.

As I looked out, a hundred floors above the pulverized dust of memory, death and reconstruction, it occurred to me that the blue has returned.

The city lay there before me, a unified patchwork of neighborhoods and jagged skyscrapers, nurtured by bridges and waterways, this enormous living organism, guarded by a lady with a lamp.   It took my breath away.  The city as one, organic, unified whole, greater than the sum of its extraordinary and unique parts.

In his novel "Winter's Tale," which describes similar vistas as viewed from the back of a magical, flying horse, Mark Helprin writes, "In the eyes of God, all things are interlinked."  This view from the Freedom Tower, as the one from the departed Twin Towers, is truly a God's eye view.  While we see the same view all the time on TV, courtesy of helicopters and blimps and some planes descending to JFK and La Guardia, it's been 15 years since I had been able to stand on elevated terra firma and, with my own eyes, look out from the tallest building in a city of towers, standing in the spot where the city began and where it nearly ended, from where you can look north and take in the entirety of this enchanted island.

A decade and a half later, we've dared to climb again.  And we've reclaimed our corner of the sky. 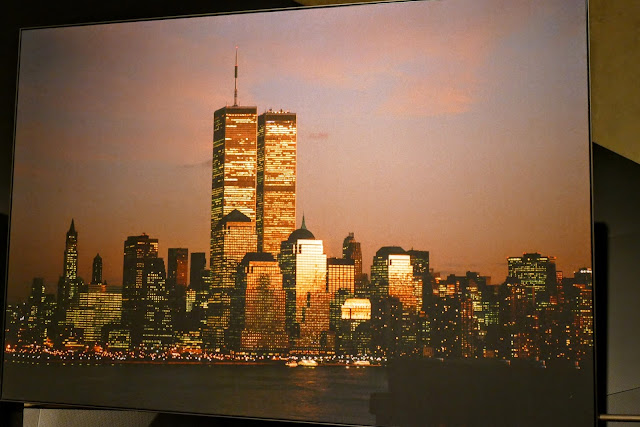 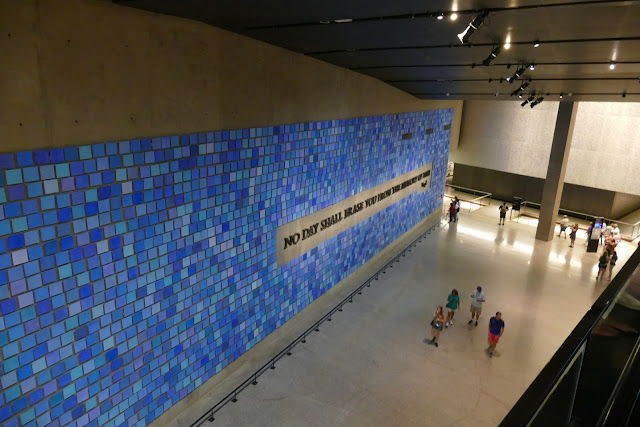 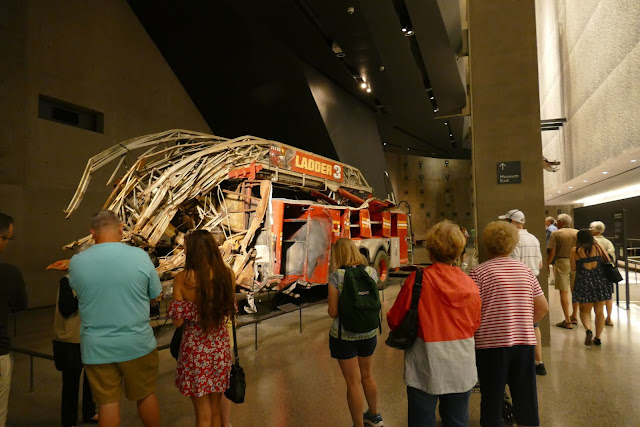 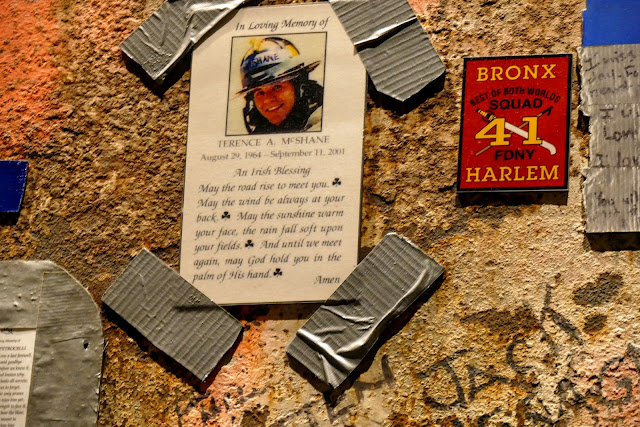 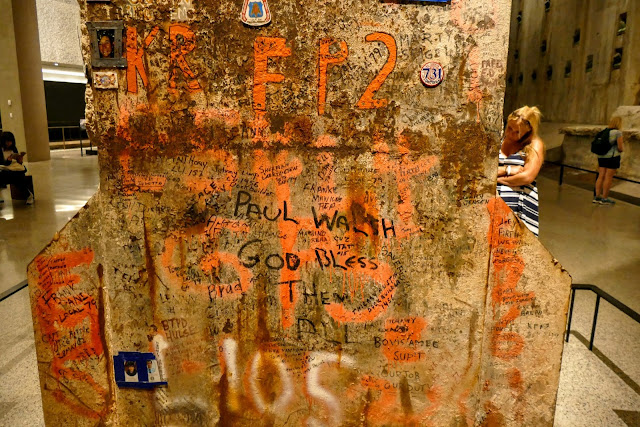 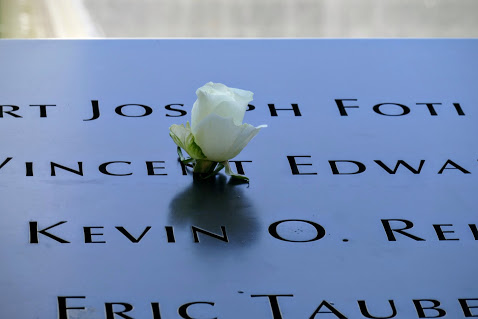 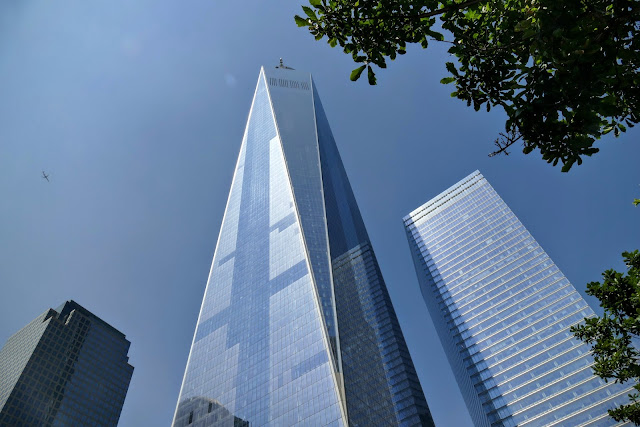 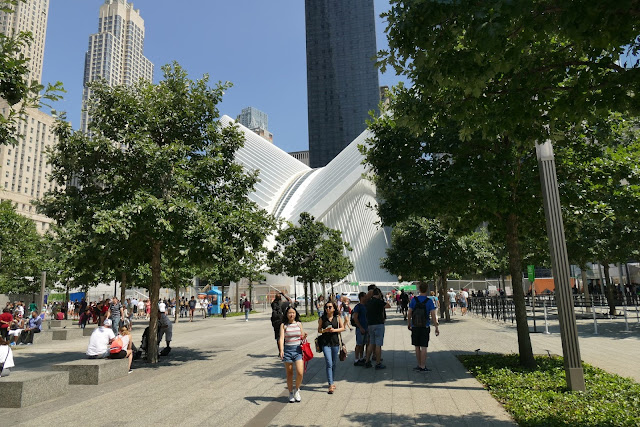 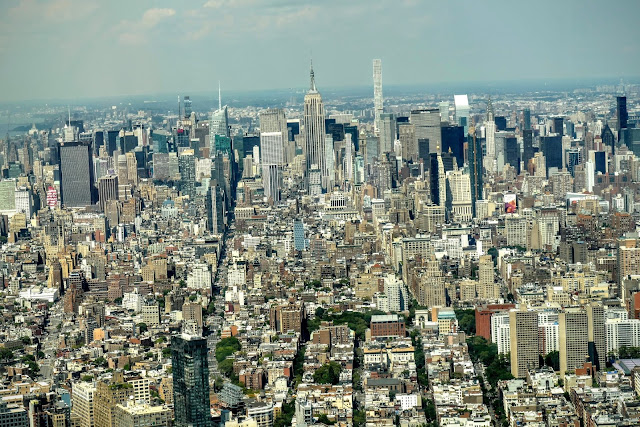 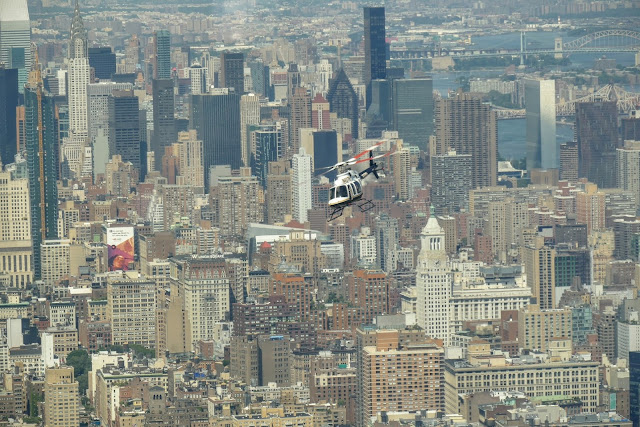 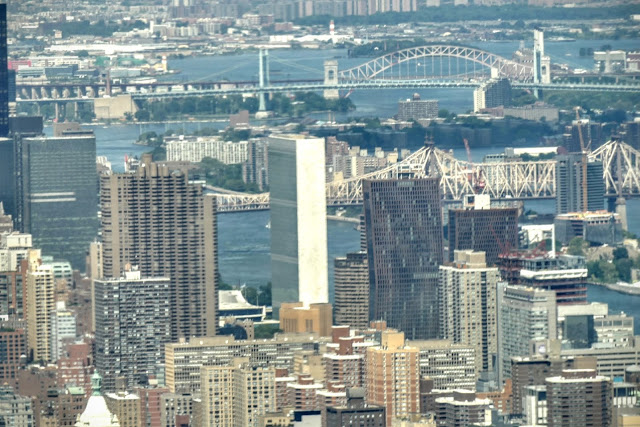 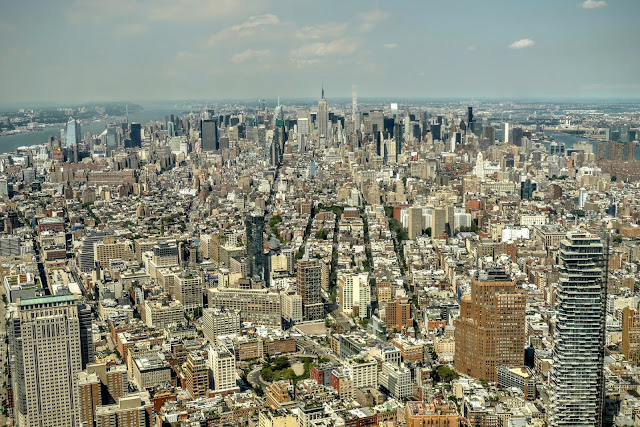 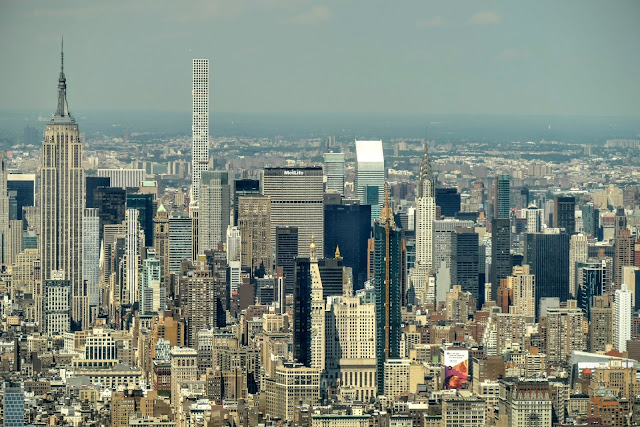 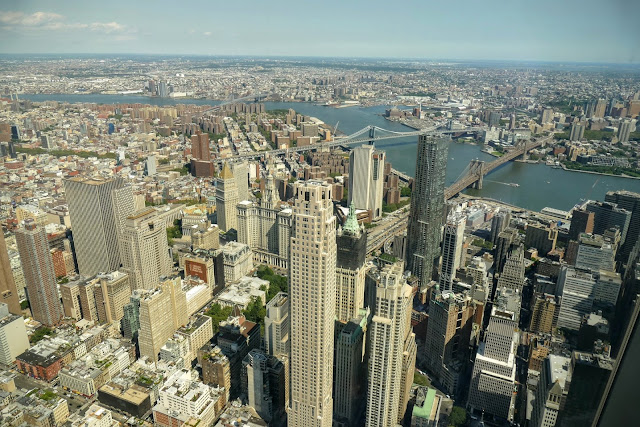 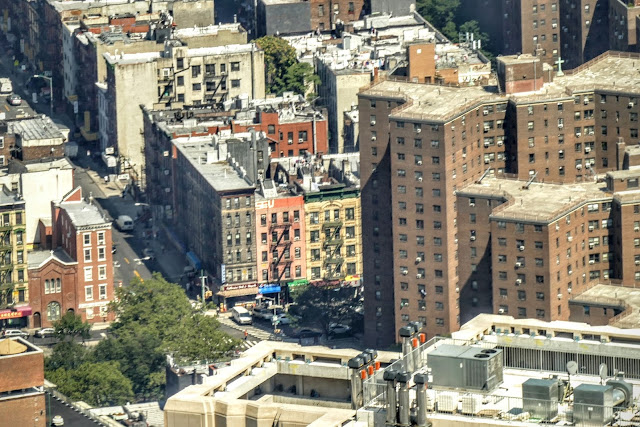 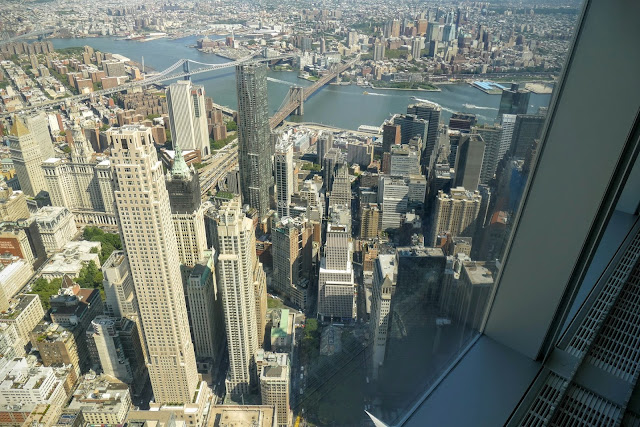 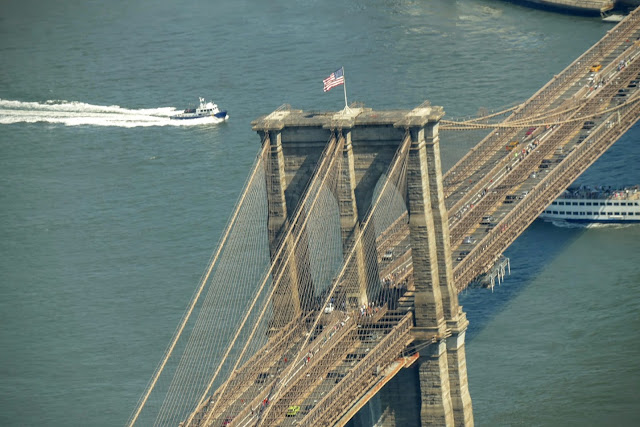 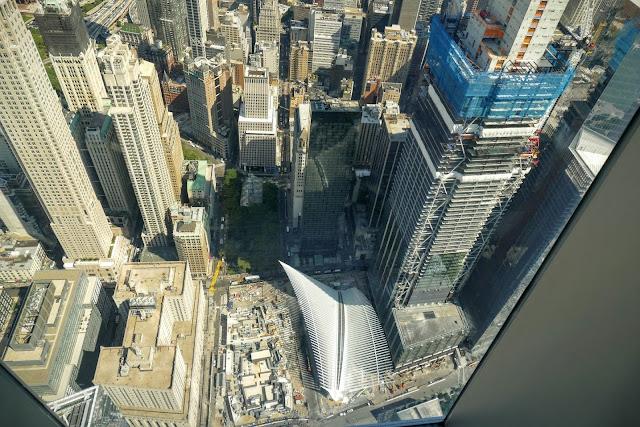 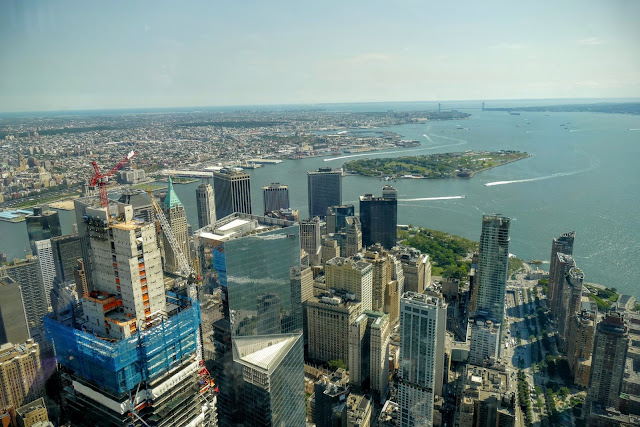 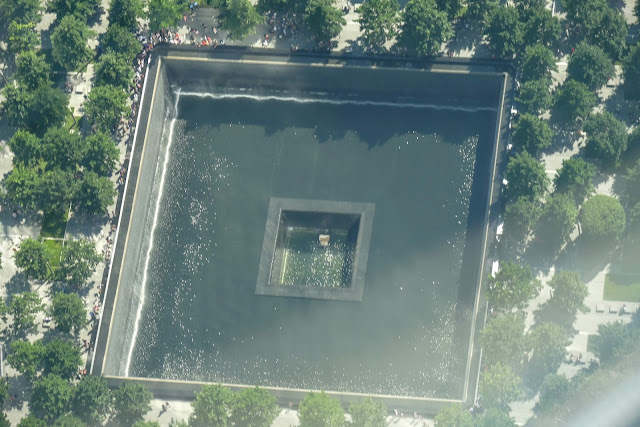 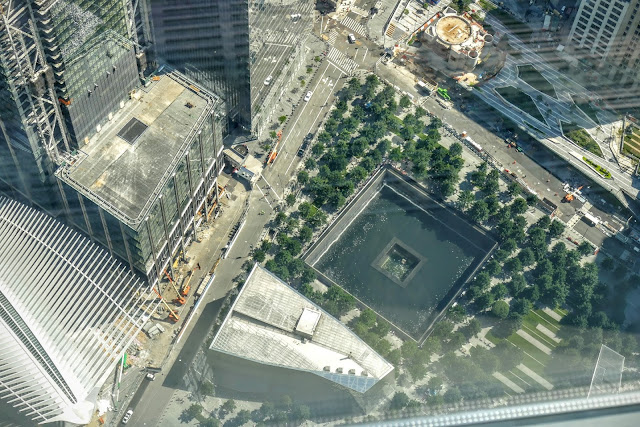 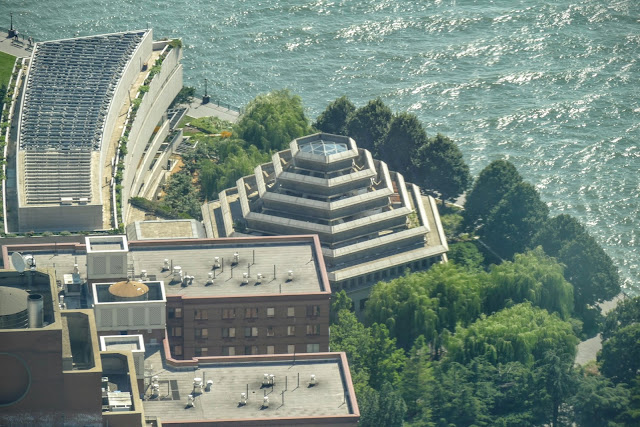 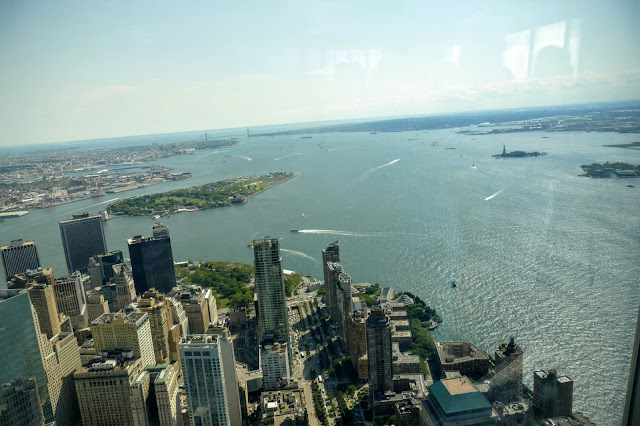 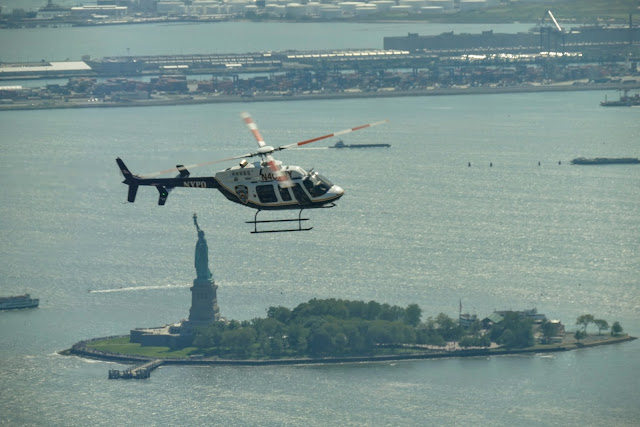 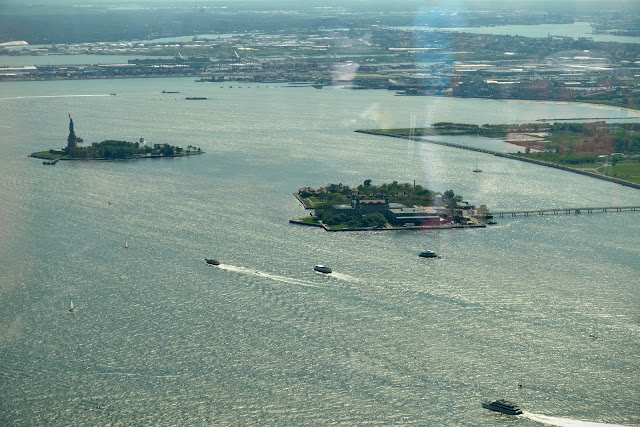