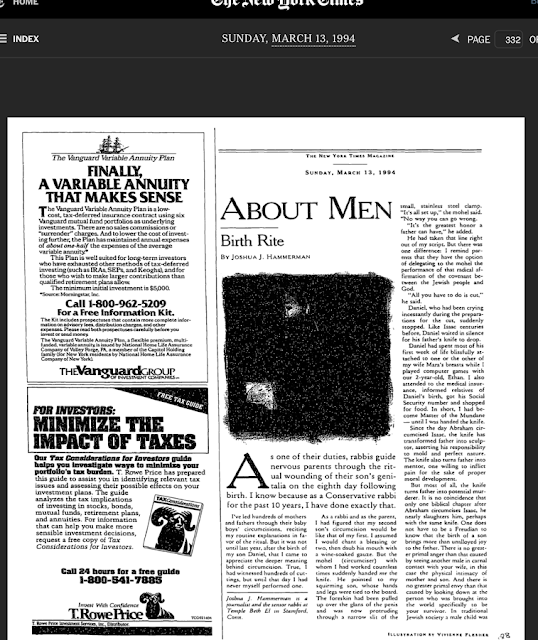 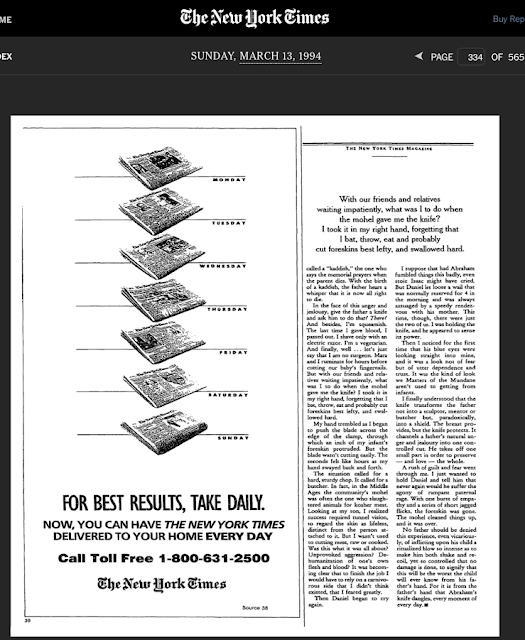 As one of their duties, rabbis guide nervous parents through the ritual wounding their son’s genitalia on the eighth day following birth. I know, because as a Conservative rabbi for the past 10 years, I have done exactly that.

I’ve led hundreds of mothers and fathers through their baby boys’ circumcisions, reciting my routine explanations in favor of the ritual. But it was not until last year, after the birth of my son Daniel, that I came to appreciate the deeper meaning behind circumcision. True, I had witnessed hundreds of cuttings, but until that day I had never myself performed one.

As a rabbi and as a parent, I had figured that my second son’s circumcision would be like that of the first. I assumed I would chant a blessing or two, then daub his mouth with wine-soaked gauze. But the mohel (circumciser), with whom I had worked countless times suddenly handed me the knife. He pointed to my squirming Son, whose hands and legs were tied to the board. The foreskin had been pulled up over the glans of the penis and was now protruding through a narrow slit of the small, stainless steel clamp.
"It's all set up," the mohel said. "No way you can go wrong."

"It's the greatest honor a father can have," he added.

He had taken that line right out of my script. But there was one difference: I remind parents that they have the option of delegating to the mohel the performance of that radical affirmation of the covenant between the Jewish people and God.

Daniel, who had been crying incessantly throughout, suddenly stopped. Like Isaac centuries before, Daniel waited in silence for his father's knife to drop.

Daniel had spent most of his first week of life blissfully attached to one of the other of my wife Mara's breasts while I played computer games with our 2-year old Ethan. I also attended to the medical insurance, informed relatives of Daniel’s birth, got his Social Security number and shopped for food. In short, I had become Master of the Mundane – until I was handed the knife.

Since the day Abraham circumcised Isaac, the knife has transformed father into sculptor, asserting his responsibility to mold and perfect nature. The knife also turns father into mentor, one willing to inflict pain for the sake of proper moral development.

But most of all, the knife turns father into potential murderer. It is no coincidence that only one biblical chapter after Abraham circumcises Isaac, he nearly slaughters him, perhaps with the same knife. One does not have to be a Freudian to know that the birth of a son brings about more than unalloyed joy to the father. There is no greater primal anger than that caused by seeing another male in carnal contact with your wife, in this case the physical intimacy of mother and son. And there is no greater primal envy than that caused by looking down at the person who was brought into the world specifically to be your survivor. In traditional Jewish society a male child was called a "kaddish," the one who would say the memorial prayers when the parent dies. With the birth of a "kaddish," the father hears a whisper that it is now all right to die.

In the face of this anger and jealousy, give the father a knife and ask him to do that? There? And besides, I’m squeamish. The last time I gave blood, I passed out. I shave only with an electric razor. I'm a vegetarian. And finally…well, let’s just say that I am no surgeon. Mara and I ruminate for hours before cutting our baby's fingernails. But with our friends and relatives waiting impatiently, what was I to do when the mohel gave me the knife? I took it in my right hand, forgetting that I bat, throw, eat and probably cut foreskins best lefty, and swallowed hard.

My hand trembled as I began to push the blade across the edge of the clamp through which an inch of my infant's foreskin protruded. But the blade wasn't cutting easily. The seconds felt like hours as my hand swayed back and forth.

The situation called for a hard, sturdy chop. It called for a butcher. In fact, in the Middle Ages the community’s mohel was often the one who slaughtered animals for kosher meat. Looking at my son, I realized success required tunnel vision, to regard the skin as lifeless, distinct from the person attached to it. But I wasn't used to cutting meat, raw or cooked. Was this what it was all about? Unprovoked aggression? Dehumanization of one's own flesh and blood? It was becoming clear that in order to finish the job I would have to rely on a carnivorous side that I didn't think existed, that I feared greatly.

Then Daniel began to cry again.

I suppose that had Abraham fumbled things this badly, even stoic Isaac might have cried. But Daniel let loose a wail that normally was reserved for four in the morning and was always assuaged by a speedy rendezvous with his mother. This time, though, there were just the two of us. I was holding the knife, and he appeared to sense its power.

Then I noticed for the first time his blue eyes looking straight into mine, and it was a look not of fear but of utter dependence and trust. It was the kind of look we Masters of the Mundane aren't used to getting from infants.

I finally understood that the knife transforms the father not to sculptor, mentor, or butcher, but, paradoxically, into a shield. The breast provides, but the knife protects. It channels a father's natural anger and jealousy into one controlled cut. He takes off one small part in order to preserve – and love – the whole.

A rush of guilt and fear went through me. I just wanted to hold Daniel and tell him that never again would he suffer the agony of rampant parental rage. With one burst of empathy and a series of short jagged flicks, the foreskin was gone. The mohel cleaned things up and it was over.

No parent should be denied this experience, even vicariously, of inflicting upon his child a ritualized blow so intense as to make him both shake and recoil, yet so controlled that no damage is really done, to signify that this will be the worst the child will ever know from his parent's hand. For it is from the father's hand that Abraham's knife dangles, every moment of every day.
Posted by Joshua Hammerman

Email ThisBlogThis!Share to TwitterShare to FacebookShare to Pinterest
Labels: Bar Mitzvah and other Sacred Life Moments, Being a Rabbi, Jewish Week "On One Foot" articles, New York Times articles, The American Jewish Condition