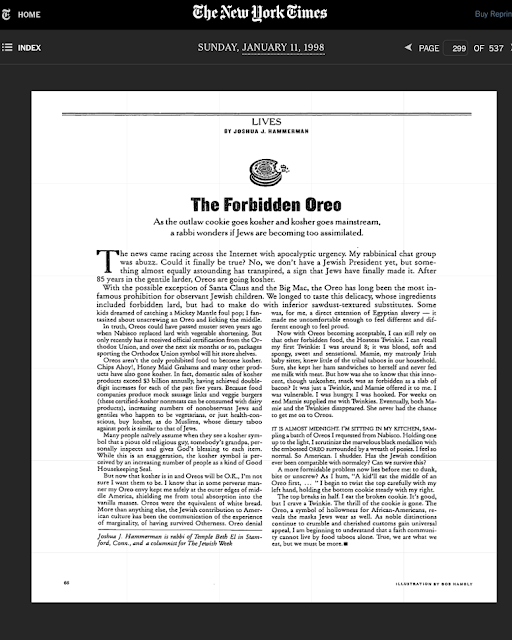 The news came racing across the Internet with apocalyptic urgency. My rabbinical chat group was abuzz with incredible tidings. Could it finally be true? No, we don't have a Jewish president yet, but something almost equally astounding has transpired, a telltale sign that Jews have finally made it. After eighty-five years in the gentile larder, Oreos have gone Kosher.

With the possible exception of Santa Claus and the Big Mac, the self-proclaimed "King of Cookies" has long been the most infamous forbidden fruit from which observant Jewish children have kept their distance. As our mouths watered at the mere mention of this unsupervised delicacy, we assuaged our deprived taste buds with inferior sawdust-textured hybrids and swallowed our yearning for Oreo mix-ins at the ice cream parlor. Some kids dreamed of catching a Mickey Mantle foul pop; I fantasized about unscrewing an Oreo and licking the middle.

I called Nabisco to confirm the good news, and it got even better. Not only are Oreos now Kosher, but so are Ritz Bits, Honeymaid Grahams and many other products. In truth, these edibles could have passed muster a decade ago, when an increasingly health-conscious Nabisco began replacing animal fat with vegetable shortening in its products.

I should be thrilled at this news. If the cookie-moguls are finding it cost-effective to answer to a Higher authority, that's because more people are opting to bring God into the kitchen. And it's not just Jews. Kosher food is increasingly popular among Moslems (who have similar dietary laws), vegetarians, and undoubtedly many who wonder how U.S. government inspectors could have let so many tainted burgers make it to the freezers of Burger King last summer.

Domestic sales of products targeted to the Kosher consumer now exceed $3 billion annually, having achieved double-digit increases for each of the past five years. The Orthodox Union alone claims 250,000 products under its supervision. Kosher companies are being gobbled up as fast as their food. The corporation that owns Armour Bacon, Conagra, now also owns Hebrew National; Shofar salamis are peddled by Sara Lee, and Manischewitz is owned by Kohlberg and Co., whose president came from, of all places, RJR Nabisco.

Eating these days is an act of faith -- and fear. We can't understand most of what s on the label, but when we see a Kosher symbol, many naively assume that a pious old religious guy personally inspects and gives God's blessing to each item. While that myth is overblown and Kosher products might not always be healthier, Jewish dietary laws promote the type of self control that often leads to healthier living. They are based on a value system that sanctifies life, limits the pain of animals and views the body as a temple; all of which places these ancient principles in confluence with the current zeitgeist and has made the Kosher symbol into this generation's Good Housekeeping seal.

But now that Kosher is "in" and Oreos are O.K., I'm not sure I want them to be. Not that I want my children to suffer, but I know that in some perverse manner my Oreo envy kept me safely at the outer edges of middle America, shielding me from total absorption into the vanilla masses.

More than anything else, the Jewish contribution to American culture has been through communicating the experience of marginality, of having survived Otherness. Oreo denial was, for me, a direct extension of Egyptian slavery -- it made me uncomfortable enough to feel different and different enough to feel proud.

Even those Jews who always ate Oreos will now lose out. They have one less whopper of a sin to notch to their defiant belts ("Take that, Rabbi Marcus! And furthermore, we served 'em with shrimp at Joey's Bar Mitzvah!"). The news leaves us utterly confused, much as Adam and Eve would have felt had God suddenly appeared to them years later, saying, "You know that fruit, the one that caused all the trouble? Well, it's O.K. now. Here, unscrew it. Take a lick." Which taboo will be the next to fall? Bestiality? Murder? The Hostess Twinkie?

I can recall my first Twinkie: I was around eight; she was blonde, soft and spongy, sweet and sensational -- it just felt right. Mamie, my matronly Irish baby-sitter, knew little of the tribal taboos imposed on my home. Sure, she kept her ham sandwiches to herself and never fed me milk with meat. But how was she to know that this innocent snack was as verboten as a slab of bacon? It was just a Twinkie, and she offered it to me. So what was I to do? I was hooked. For weeks on end Mamie supplied me with Twinkies. Eventually, both Mamie and the Twinkies disappeared. She never had the chance to get me on to Oreos.

It is almost midnight. I'm sitting at my kitchen table, sampling my first batch of the previously prohibited cookie. Holding it up to the light, I scrutinize this marvelous black medallion with the embossed "OREO" surrounded by a wreath of posies. I feel so normal. So American. I shudder. Has the Jewish condition ever been compatible with normalcy? Can we survive this?

A more formidable dilemma lies before me: to dunk, bite or unscrew? As I hum, "A kid'll eat the middle of an Oreo first...," I begin to twist the top carefully with my left hand, holding the bottom cookie steady with my right.

The top breaks in half.

I eat the broken cookie. It's good, but I crave a Twinkie. The thrill is gone.

The Oreo, enduring symbol of hollowness for African-Americans, reveals the masks Jews wear as well. As noble distinctions continue to crumble and cherished customs gain universal appeal, I am beginning to understand that a faith community cannot live by food taboos alone. True, we are what we eat, but we must be more.
Posted by Joshua Hammerman