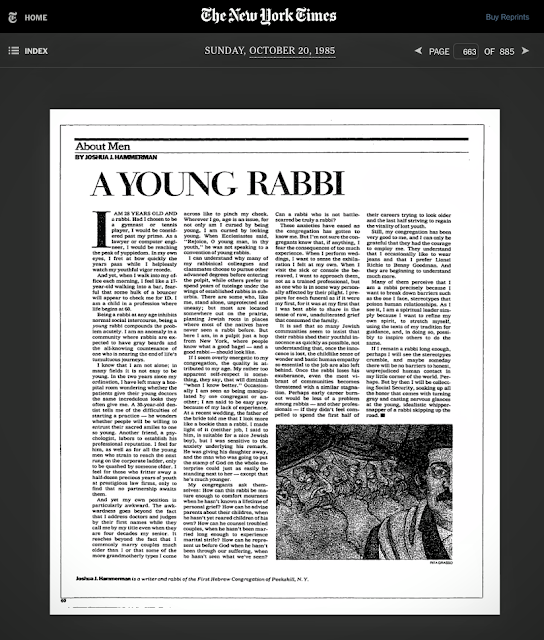 I am 28 years old and a rabbi. Had I chosen to be a gymnast or tennis player, I would be considered to be past my prime. As a lawyer or computer engineer, I would be reaching the peak of yuppiedom. In my own eyes I fret at how quickly the years pass while I helplessly watch my youthful vigor recede.

And yet, when I walk into my office each morning, I feel like a 17-year-old walking into a bar, fearful that some hulk of a bouncer will appear to check me for ID. I am a child in a profession where life begins at 60.

Being a rabbi at any age inhibits normal social intercourse, being a young rabbi compounds the problem acutely. I am an anomaly in a community where rabbis are expected to have grey beards and the all-knowing countenance of one who is nearing the end of life's tumultuous journeys.

I know that I am not alone. In many fields it is not easy to be young. In the two years since my ordination, I have left many a hospital room wondering whether the patients give their young doctors the same incredulous looks they often give me. A 30-year-old dentist friend tells me of the difficulties of starting a practice -- he wonders whether people will be able to entrust their sacred smiles to one so young. Another friend, a psychologist, labors to establish his professional reputation. I feel for him, as well as for all the young men who strain to reach the next rung on the corporate ladder, only to be quashed by someone older. I feel for those who fritter away a half dozen years of youth at prestigious law firms, only to find that no partnership awaits them.

And yet my own position is particularly awkward. The awkwardness goes beyond the fact that I address doctors and judges by their first names while they call me by my title even when they are four decades my senior. It reaches beyond the fact that I commonly marry couples much older than I or that some of the more grandmotherly types I come across like to pinch my cheek. Wherever I go, age is an issue, for not only am I cursed by being young, I am cursed by looking young. When Ecclesiastes said, "Rejoice O young man, in thy youth" he was not speaking to a convention of young rabbis.

I can understand why many of my many of my rabbinical colleagues and classmates choose to pursue other advanced degrees before entering the pulpit, while others prefer to spend years of tutelage under the wings of established rabbis in suburbia. There are some who, like me, stand alone, unprotected and uneasy; but most are located somewhere out on the prairie, planting Jewish roots in places where most of the natives have never seen a rabbi before. But here I am, in a pulpit just a hop from New York, where people know what a good bagel -- and a good rabbi -- should look like.

If I seem overly energetic to my congregation, the quality is attributed to my age. My rather too apparent self-respect is something, they say, that will diminish "when I know better."

Occasionally I am seen as being manipulated by one congregant or another; I am said to be easy prey because of my lack of experience. At a recent wedding, the father of the bride told me that I look more like a bookie than a rabbi. I made light of the comment (neither job, I said to him, is suitable for a nice Jewish boy), but was sensitive to the anxiety underlying his remark. He was giving his daughter away, and the man who was going to put the stamp of God on the whole enterprise could just as easily be standing next to her -- except that he's much younger.

These anxieties have eased as the congregation has gotten to know me. But I'm not sure the congregants know that, if anything, I fear the consequence of too much experience. When I perform weddings, i want to sense the exhilaration I felt at my own. When I visit the sick or console the bereaved, I want to approach them, not as a trained professional, but as one who is in some way personally affected by their plight. I prepare for each funeral as if it were my first, for it was at my first that I was best able to share in the sense of raw, unadulterated grief that consumed the family.

It is sad that so many Jewish communities seem to insist that their rabbis shed their youthful innocence as quickly as possible, not understanding that, once that innocence is lost, the childlike sense of wonder and basic human empathy so essential to the job are also left behind. Once the rabbi loses his exuberance, even the most vibrant of communities becomes threatened with a similar stagnation. Perhaps early career burnout would be less of a problem among rabbis -- and other professionals -- if they didn't feel compelled to spend the first half of their careers trying to look older and the second half striving to regain the vitality of lost youth.

Still, my congregation has been very good to me, and I can only be grateful that they had the courage to employ me. They understand that I occasionally like to wear jeans and that I prefer Lionel Ritchie to Benny Goodman. And they are beginning to understand much more.

Many of them perceive that I am a rabbi precisely because I want to break down barriers such as the one I face, stereotypes that poison human relationships. As I see it, I am a spiritual leader simply because I want to refine my own spirit, to stretch myself using the texts of my tradition for guidance, and in doing so, possibly to inspire others to do the same.

If I remain a rabbi long enough, perhaps I will see the stereotypes crumble, and maybe someday there will be no barriers to honest, unprejudiced human contact in my little corner of the world. Perhaps. But by then I will be collecting Social Security, soaking up all the honor that comes with turning grey and casting nervous glances at the young, idealistic whippersnapper of a rabbi skipping up the road.
Posted by Joshua Hammerman

Email ThisBlogThis!Share to TwitterShare to FacebookShare to Pinterest
Labels: Being a Rabbi, New York Times articles, The American Jewish Condition