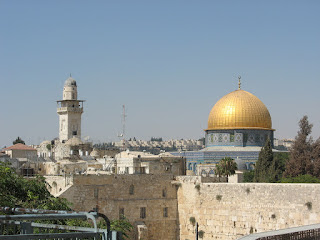 (you can click on the photos to enlarge them)

As our time in Israel begins to come to a close, we’ve shifted up north to the Ramot Golan Resort, with a gorgeous view from our balcony overlooking the Kineret, with the lights of Tiberias twinkling on the other side of the lake. Tiberias is hardly Israel’s most beautiful city when viewed up close, but from this distance it looks positively angelic, its lights scaling the hill on the other side as if reaching for the heavens. It is hard to tell, in fact, where Tiberias ends and the stars begin.

That’s the thing about Israel: it feels closer to heaven. Its blue skies are bluer, its noises louder, its beauty more spectacular (and its faults more pronounced).

There is no middle ground here – only glaring lights.

As we left Jerusalem this morning, some reflections…

Despite some terror incidents that have occurred of late, the sense of personal insecurity has diminished considerably since I was last here. Mara and I were even able to return to Abu Shukri in the Moslem Quarter of the Old City for the best Hummus in the world 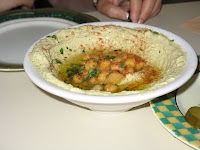 a treat we hadn't enjoyed in many years.

Saturday night in Jerusalem was really like old times on the Midrachov. Ben Yehuda Street was packed with American and Israeli youth and the shops were bustling. Those “welcome courageous tourist” signs seem curiously anachronistic now, and only a few stores still show them . The existential threats are as great as ever, but the personal security threats facing Israelis and tourists are no longer an impediment.

This is true in most of the country, but not in Sderot. Ethan went there today on his trip and the experience moved him profoundly.

We’ve seen lots of friends here, as always. We met Alix Brown near the Kotel earlier this week, and on Shabbat, bumped into the Friedlieb family from a prior Beth El Israel tour. I saw a number of rabbinic colleagues at services on Shabbat morning, at a homey, ruach-filled egalitarian minyan in the German Colony called Kehillat Kedem.


On Saturday night, we ran into Rabbis Liz Rolle and Phil Schechter 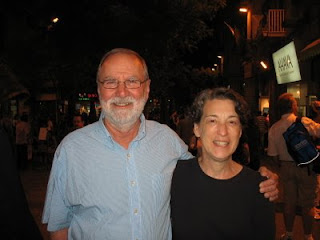 about a block from Zion Square and later on at Big Apple Pizza (still the best pizza I’ve ever had anywhere!), we saw Marty and Sheila Israel.

(daughter of Gerry and Fran - here shown with Mara just before Shabbat dinner)and on Sunday, as we drove up the coast, we stopped off to pay a visit to Aliya Boyer (daughter of Beth and Brad) at Camp Kimama just north of Netanya. Aliya was thrilled to see us and we were thrilled to have the chance to take her out to lunch at a nearby mall. (Here she is with our Dan, standing on the camp's beautiful waterfront) 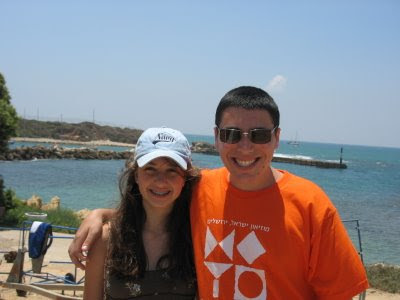 The attached photos are proof that Israel is treating everyone just fine.
It is always special to play Jewish Geography in Israel, and I’ve done that a lot. Here there are far fewer than six degrees of separation. There are no degrees, really. On Ben Yehuda, each segment of the street featured dramatically different styles of music: a harpist on the top of the street, a Japanese choral group in the middle, and at the bottom, a group of frenzied Bratzlaver messianists chasing down tourists to join them in the dance. Couldn’t be more different, yet I feel a
strange connection to them all.

If you are interested in taking part in a TBE Israel Adventure over the coming year, let me know!

And for now, Shalom from the Golan!
Posted by Joshua Hammerman