Windpocalypse #1: How Art the Mighty Fallen 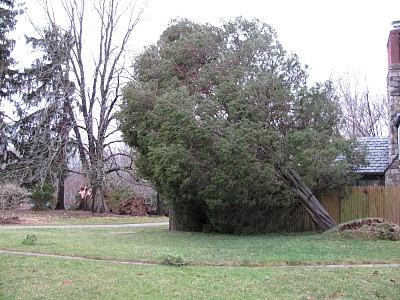 The storm of this past weekend has turned Stamford into a virtual war zone. The storm killed 2 locally and cut power to 80000. Estimates are that about 30% of the homes in the area are without power. Schools have been cancelled for the day and the mayor robo-called everyone yesterday to tell us to stay off the streets. I was out at the time, cruising downtown to a wedding in a blacked out inn along the battered shoreline - we did the huppah by candlelight alongside a crackling fire. It was beautiful. 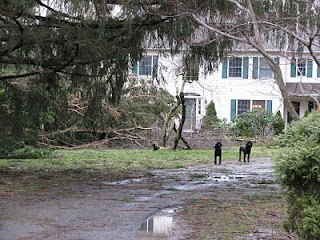 The damage was awe-inspiring. Not since I saw the glowing wildfires of Yellowstone and the toothpick-like flattened trees of Mount Saint Helens have I encountered first-hand such an example of raw natural power. People commented that Saturday's storm felt "biblical." It did.

An enormous tree fell in my front yard (see photos - click to enlarge), so huge and majestic that it took three trees with it. Another large tree, beautiful and stately, now lies sprawled across the temple's driveway. Still another was completely uprooted and leans limply near the temple's office entrance. So which is more mind boggling: a huge tree snapped literally in half? Or one equally large uprooted from the bottom? Either one bespeaks a power more humbling than the human mind can imagine. One was a victim of the drenching rains, the other of the piercing, howling winds.

It is all so humbling. Humbling - and healing.

Tonight is Rosh Hodesh Nisan, an irony that one can only call Jewish.

The Code of Jewish Law (Shulchan Aruch 226:1 with Mishna Brura) informs us that the first of the Hebrew month of Nisan marks the beginning of the season when we say Birkat Ha'Ilanot - the blessing we recite annually upon seeing trees in bloom. Technically, we are to say it only when we see the flower bloom that precedes the growth of a fruit.

"Blessed are You, Source of Life, who does not deny Your world anything, and who has created lovely things, including good trees from which human beings may derive enjoyment."

So at the very moment we mourn the loss of some stately trees, we'll also bless the new life sprouting forth from others. And the wonderful drama of nature's regeneration plays out before us.

What I wrote about Mt. Saint Helens in a Yom Kippur sermon several years ago still holds true today:

But of all the artistic responses to catastrophe, none can match what I saw just a month ago in Washington state. The canvas was Mount St. Helens and the artist - the artist was God. On May 18th, 1980 the eruption of Mt. St. Helens in southwest Washington changed more than 200 square miles of rich forest into a gray, lifeless landscape. The devastation of the blast is almost unfathomable. The lateral blast swept out of the north side at 300 miles per hour creating a 230 square mile fan shaped area of devastation reaching a distance of 17 miles from the crater. With temperatures as high as 660 degrees and the power of 24 megatons of thermal energy, it snapped 100-year-old trees like toothpicks and stripped them of their bark. The largest landslide in recorded history swept down the mountain at speeds of 70 to 150 miles per hour and buried the North Fork of the Toutle River under an average of 150 feet of debris. The massive ash cloud grew to 80,000 feet in 15 minutes and reached the East Coast in 3 days, circling the earth in 15 days. 7,000 big game animals, 12 million salmon, millions of birds and small mammals and 57 humans died in the eruption. Before the blast the mountain stood 9,677 tall. It now stands at 8,363 feet. A thousand feet of mountain is no more. Talk about destruction!

So when we went there last month, I expected to find an eerie moonscape. But I saw something absolutely amazing instead. The land around the mountain is slowly healing. There is new growth everywhere, trees and moss and animal life. In fact, life returned to Mount St. Helens even before the search for the dead had ended. National Guard rescue crews looking for human casualties during the week after the 1980 eruption found that flies and yellow jackets had arrived before them. Curious deer and elk trotted into the blast zone just days after the dust settled. Helicopter pilots who landed inside the crater that first summer reported being dive-bombed by hummingbirds, which mistook their orange jumpsuits for something to eat. A whole new ecosystem is emerging before our eyes. Peter Frenzen, the chief scientist at Mount St. Helens, put it best, "Volcanoes do not destroy;" he said, "they create."

Now I know how we Jews developed our proclivity for confronting madness with artistry. We inherited it from God, the One who renews Creation each day. Never was that more evident to me than at Mount Saint Helens.

Now I can amend that statement and I don't have to go to Washington State to do it. I only need look out the window. 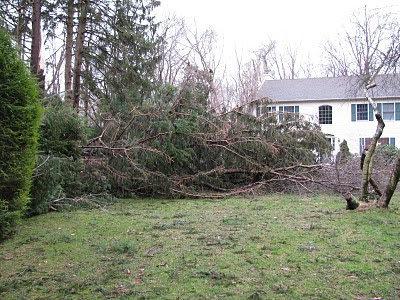 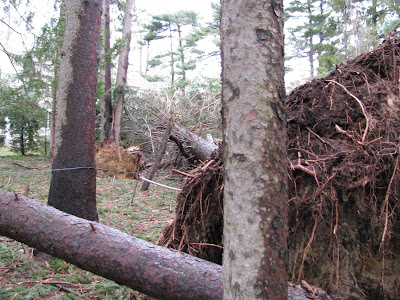