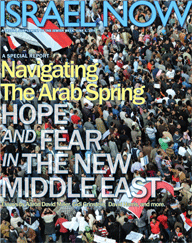 The Year Of Thinking Biblically

A plea for adaptability and openness in a world increasingly colored, as in the Bible, in stark black and white.

Joshua Hammerman
Special To The Jewish Week
Wednesday, June 1, 2011
How can we not rejoice at what we saw in Tahrir Square, the author writes. getty imagesWhen Christian fundamentalists predicted that May 21 would mark the end of the world, Jews laughed. We know that the end of the world won’t happen until September, when the Palestinians bring their declaration of the statehood to the UN General Assembly. Or when the Iranians get the Bomb. Or whenever President Obama utters the word “1967” and is not referring to Haight-Ashbury or Carl Yastrzemski.

If the Jews are a stiff-necked people, it’s because we never stop tossing and turning, especially since Tunisian street vendor Mohamed Bouazizi set himself aflame on Jan. 4 and all heck broke loose in the Middle East. Try as we might to be thrilled at a region basking in democratic possibilities, the chain reaction of events spinning out of control has left us gasping, to the point where (for once) Jews on the left and right actually agree on something. That’s the good news. The bad news is that what we agree on is that Israel faces mortal peril.

Google “existential threat” and then add “Israel” and you get 149,000 results (by contrast, add “climate change” and you get only 144,000). The word “existential” has been bandied about so often lately that I half expected Prime Minister Netanyahu to meander into the House chamber wearing a beret and lugging a tattered copy of “No Exit.”

Unfortunately, for the peace process, there seems to be No Entrance.

With the Arab Spring now turning to summer, all the craziness needn’t herald an Israeli fall. For ages, people have characterized Israel’s neighborhood as dangerous. Now that neighborhood looks like it could be going upscale, like Brooklyn. For decades, Israel was the only democracy in the Middle East. Now, everywhere, the voices of long-suppressed people are being heard. Prime Minister Netanyahu said last week at the annual policy conference of the American Israel Public Affairs Committee (AIPAC), “Israel is not what’s wrong with the Middle East. Israel is what’s right with the Middle East,” and indeed, anti-Zionism has not been the driving force of the uprisings.

To quote a recent article in the Kuwaiti Times, “The Arab spring has broken some famous myths about the Arab people — being indifferent, immune to change, cherishing authoritarian rule, little appreciation for democracy and human rights. ... The Arab spring has proven that Arab concerns are real human concerns.” When the dust settles, there is reason to hope that Israel could potentially be seen as a model for democracy rather than as an alien interloper in the region.

How can we not rejoice at what we saw in Tahrir Square? How can we not be in awe of the courage of the people of Homs, Dara’a and Banias? We who stood up to the Syrian tyrant Antiochus and who more recently have seen Bashar Assad harbor Hamas and funnel weapons to Hezbollah, how could we not be encouraged at the prospect of a liberated Syria? And we who outlasted the Pharaohs need to remember that Mubarak’s Egypt, recalled so nostalgically by some, was a hotbed of anti-Semitic incitement, where TV programs regularly spread myths of blood libels and the “Elders of Zion.”

But we are the people who can’t take “Yes” for an answer. So we worry.

The left fears that once a Palestinian state is endorsed at the UN, the two-state solution will be history and Israel will lose legitimacy, forced to confront a worldwide boycott. Its sovereignty will be challenged by hundreds of thousands of unarmed civilians marching back across its borders to their “homes” in Israel. This non-violent mass movement, modeled on the Arab Spring, would garner international backing — a mortal threat to Israel.

Right-wingers, including Prime Minister Netanyahu, feel that Israel needs to hold firm on refusing to negotiate with the Palestinians as long as Hamas is part of a governing coalition. They hope to deny the Palestinians unilateral recognition without being cornered into giving up strategic territorial assets that leave Israel with indefensible borders — another mortal threat.

And there is the prospect of a nuclear Iran, which all agree is an additional mortal threat.

In the face of these dangers, rabbis are being called upon by all sides to rally the troops, an awkward calling, because we’re uncomfortable in foxholes, trained less to fight for power than to speak truth to it. Great rabbis have defended the Jewish people in times of trouble before, but our effectiveness depends on our speaking from a place of moral authority. We are natural educators more than advocates, pursuers of peace rather than partisanship. We are trained to be self-critical. While we all fear for Israel’s survival, we also reserve the right to challenge Israel’s policies, especially if we see them as self-destructive. And things are happening so darned quickly.

With massive floods, earthquakes and tornadoes becoming a regular occurrence, not to mention nuclear meltdowns and a daily dose of regime change, we are living in times that could only be described as “biblical.” But rabbis are trained to think rabbinically. There is a huge difference between the worldviews of the Bible and the Talmud. Rabbinic Jews inhabit a world of nuance and dialogue. Rabbis are skilled at the art of the adaptable, a survival technique designed for an era of powerlessness. The magic we do comes from our words and our wits. We live in the shades of gray.

The biblical world, by contrast, is sharply drawn in black and white. The Bible is a complicated book, no doubt, but its culture is characterized by bold action; it lacks subtlety. The God of the Bible speaks in direct commands, whereas the God of the Talmud is filtered through echoes of human imagination and sacred text. It is no coincidence that rabbis assumed Jewish leadership only after the Second Temple was destroyed and the biblical age complete.

Because we specialize in adaptability, rabbis have skills that could be valuable in navigating through these turbulent times. The problem is that because history is moving so fast, people aren’t listening to nuance. In fact, they aren’t listening at all. Each day brings about new fears and uncertainties. Rabbis need to teach people how to listen, to imagine the worldview of the Other, to hear the different narratives. Israel’s story is powerful and true; it can withstand the comparison to contrasting chronicles. But there are truths in the Palestinian narrative too, and theirs is a history that needs to be heard.

What rabbis do best is pique the conscience and expand the mind. Other Jews need to appreciate that role rather than question rabbis’ loyalty, as has happened too often lately, most notably when newly nominated Reform leader Rabbi Rick Jacobs’ pro-Israel credentials were challenged by biblically minded mercenaries. His only “sin” has been to act rabbinically in a year of living biblically, and it is not a sin at all. It’s why we’re here.

The Arab Spring is many things, but it has evolved into the ultimate showdown between America and the Iranian mullahs. This clash of civilizations is biblical, an ideological fight to the finish, a war that must be won. The stakes have not been higher since D-Day.

But once you take Iran and its proxies out of it, Israel vs. Palestine is not a biblical clash, at least not for those who are reasonable and sane, which I believe to be the majority of both populations. In this contest, the only route to victory is for both sides to win, or at least call it a draw, as so often happens in the Talmud.

When my car veers off the planned route, the GPS frantically flashes “recalculating,” and then offers an alternate route. Pols and pundits tend to respond to biblical upheavals by regurgitating rather than recalculating, trying to shoehorn new events into their tired old theories, which is like trying to fight World War II from behind the Maginot Line.

Memo to the experts: There are no experts. None of us has any idea where this will all end up.

Rabbis have been skilled at recalculating since long before the invention of the GPS. We’ve been trained to understand that each new event requires that we instantly challenge all prior assumptions, something that happens on just about every page of the Talmud.

Recalculating requires an ability to listen and an openness to changing our positions. But it need not lead to paralysis.

The unfolding big picture presents enormous opportunities for Israel, despite the known risks. At the very least, the current modes of acceptable protest in the Middle East no longer involve guns and suicide belts. I’ll take 10,000 peaceful marchers in Majdal Shams any day, over tanks, missiles and bombs. The Arab Spring teaches us that if Israelis can appeal directly to the people of Cairo, Ramallah and Damascus the way Anwar Sadat once appealed directly to them, the neighborhood could suddenly become much less dangerous. If Damascus falls and Hamas is forced to reform, Iran will suddenly become the shakiest of dominoes.

Rabbi Joshua Hammerman is spiritual leader of Temple Beth-El in Stamford, Conn. He writes a regular column for the paper, and his “Hammerman on Ethics” column appears on The Jewish Week’s website.

Email ThisBlogThis!Share to TwitterShare to FacebookShare to Pinterest
Labels: Arab Spring, Being a Rabbi, israel 21c, Jewish Week "On One Foot" articles