The Epic Struggle to Save Soviet Jewry: A Very Special Anniversary of the December Revolution

Join us this Shabbat morning for a very special presentation,  as we mark the 25th anniversary of the march on Washington for Soviet Jewry.  Gal Beckerman, opinion editor of the Forward, will speak about his prize-winning book, "When They Come For Us We'll Be Gone: The Epic Struggle to Save Soviet Jewry."

Read a review of the book and an interview with the author. See photos that I took on that fateful day and my article from the Stamford Advocate in Dec. 1987  and see the 25th anniversary website.  Service begins at 9:30.  The speaker's presentation will begin at about 11.  Join us also for Q and A at a Kiddush lunch following the service.  Below is my Jewish Week article on the March on Washington:

A Freedom March Of Our Own
Remembering the Washington rally for Soviet Jewry, 25 years on.
12/04/12
Rabbi Joshua Hammerman
Special To The Jewish Week 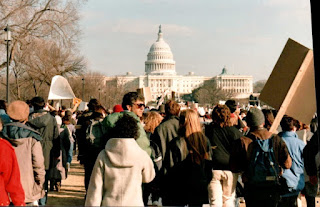