Shabbat and Hanukkah-O-Gram for Dec. 11

Shabbat Shalom, and mazal tov to Jessica Olin and Sydney Eben, the last TBE b'not mitzvah of 2014 - and to their families, who are sponsoring this week's Shabbat-O-Gram and weekly announcements.  Click here to read Max Trell's Torah commentary from last Shabbat - and to see the connection between Jews and professional wrestling!  This Shabbat morning, Jessica will be the final student from our Bar/Bat Mitzvah class of current TBE 8th graders.  Mazal tov to all of them! 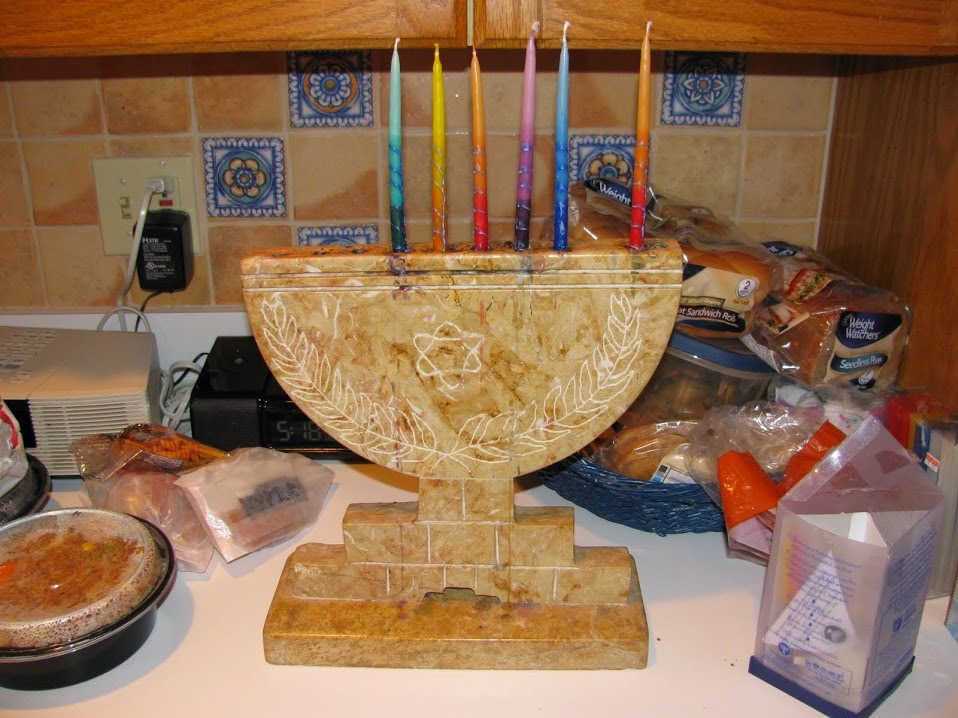 Hanukkah begins this coming Tuesday night (and don't forget our big musical Hanukkah celebration next Friday!)  Here are some resources for you: 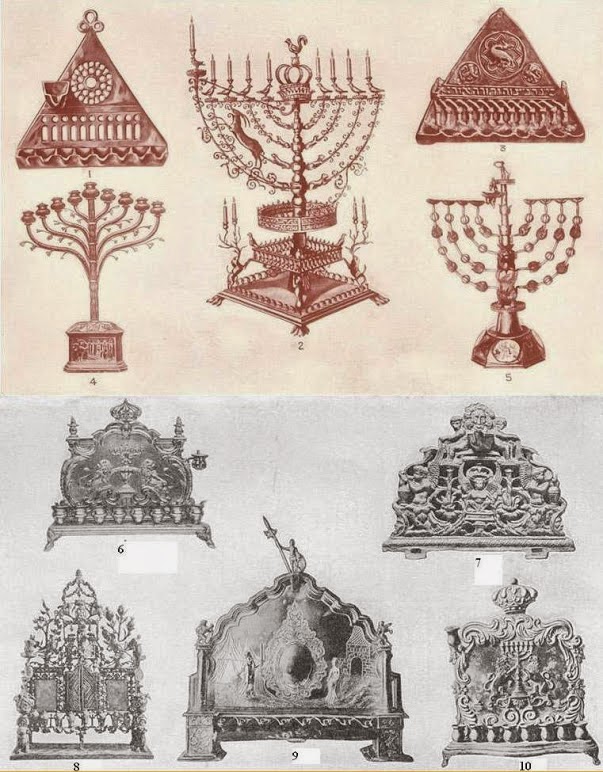 Today is the second anniversary of the Newtown shootings.   Propelling the post Newtown world from darkness toward light takes us in three distinct directions.

1)       Healing - as we pray together at services and at events like this evening's vigil coordinated by the Enough Campaign at the Ferguson Library, and through our tears will emerge some sense of healing. We are all affected so profoundly by what happened two years ago.
2)       Activism - see the 2013 State Scorecard and see how improved gun laws could really make a difference for public safety.  School shootings have become so commonplace that they are no longer front page news in this country.  This is madness.  Connecticut is way ahead of most states, for which we can be proud.  But nationally, there is a long way to go.  And so we ask, what can we do to change our culture of violence?
3)       Acts of Kindness - The people of Newtown have asked that we remember the victims through performing 26 acts of kindness and love, one for each of the victims.  See the Newtown Kindness website, and learn more about the victims on the very moving  Sandy Hook family site.

All of these options lead us in the direction of life, affirming and choosing life in the face of death, life after Newtown.

With that in mind, I share here, with her permission, the testimony shared by Dana Horowitz last winter here at Beth El.

Memories of a Father, by Dana Horowitz

Some called him Brewer.  Some called him Bruce Lee.  Others called him Brucie.  His name was Bruce Horowitz and I called him dad.  His smile would light up a room.  He was one of the friendliest and most personable people you would ever meet.
He loved taking hikes, especially at Sleeping Giant State Park in Hamden, CT, listening to music, photography, sailing with the sun shining on his face, and most of all he loved doing these activities with me, his only child.  I was proud to call him one of my best friends.
On May 1, 1992, my dad turned 46.  It was my junior year of high school.  He had stopped by my house that morning, (my parents divorced when I was 10), so that I could give him his birthday gift: a photo of us from a photography project we worked on together, smiling and eating cookies.  He loved the picture.  Little did I know, as I watched my father pull out of the driveway smiling ear to ear that it would be the last time I ever saw him.

Three days later, on the morning of May 4, he was shot and killed, point blank, in his place of employment in Hamden.  He was a public insurance adjuster who had a meeting with his supervisor, and their 31-year old client.  This client shot and killed my father, and then my father's supervisor with a 9mm gun.  A gun he had without a permit.  A gun he shot a total of 10 times.
I was eating lunch in the courtyard of my high school when I was summoned and escorted to the principal's office.  As I walked in, my heart sank at the sight of my mother in tears; I knew something was terribly wrong.
"Your father was shot and killed at work this morning," she said to me.  I was 16 years old and couldn't believe what I was hearing.  Could this really be happening in my life? I was in shock.

The immediate days that passed were not easy.  Despite my heartbreak and disbelief, this double homicide had become front page news all over New England.  On the day of the funeral, local news channels reported directly outside of the funeral home as cars were pulling into the parking lot. Our privacy was lost and our pain was shared with complete strangers.  My father's name was in the news for days, as was mine.  When I returned to school after a week of mourning, I felt like people looked at me differently, they didn't know what to say.  Most said "I'm sorry", but it was never comfortable for them or me.
That morning, my world changed forever.   My father became a statistic, another victim of gun violence.  Now, more than 20 years later, whenever I read about gun violence at a school, on a university campus, in a movie theater, or just in someone's neighborhood, my heart breaks for the families that lost loved ones.  I am angry that someone made a life choice that not only left someone dead, but left a permanent scar on their family and their community.  Using a gun to kill innocent people is horrible.  No one should have to endure the pain of losing someone they love before a full life was lived.
I now have two children of my own and the hardest question my five year old daughter asked me, which I have not yet honestly answered, was "How did your daddy die?"  How do I answer that question?  What do I say?  A five year old is just a child, an impressionable soul that embraces life with such joy and wonder.  I never want to take that away from her.  One day she will know the truth, but it won't be for a long, long time.
My dad would have been the best grandfather.  He would have taught my kids about trust, equality and love just as he taught me when I was a child.  He would have been proud of both of them for all of their large and small successes.  He would have made each child feel special and valued as he did for me during the sixteen years he was in my life.  My dad was a special man and despite his life being stolen from me, I take comfort in knowing that no one can steal my beautiful memories.  Memories live forever. 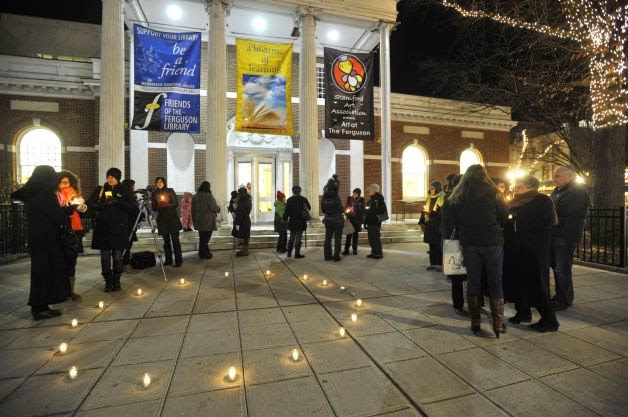 Lisa Manheim received the prestigious Harvey Peltz Award at last night's UJF Annual Meeting, held here at TBE.  Her words were so inspiring I asked if I could share them here.

My Federation story began on a rainy Sunday in February, 1985.  I straggled into the Bridgeport JCC with my parents, who were chairing something called Super Sunday.  I expected a carnival or a dance party for an event whose title included the word "Super."  What I walked into instead was a large room, filled with black telephones, lined up on tables which were set up in rows.  In the back of the room, there was an enormous cauldron of soup simmering, to feed the volunteers.

My dad sat me down and explained that Super Sunday was a day when the Jewish community came together to call on other Jews to pledge money to our Jewish Federation.   I'm sure we had a long conversation about all the good and important things that Federation does,  but what I really remember was the soup. The smell was intoxicating- onions, garlic and vegetables-as it permeated the auditorium of the JCC.  I had come for the Super, but I stayed for the soup. It's what I remember most about that day.

And I realize now, 30 years later, that Federation is all about the soup.

I think about my mission to Israel in 2000, cooking lentil soup in a small kitchen in Be'er sheva, with Jews who had just emigrated from Ethiopia.  With the help of Federation dollars, they had made the harrowing journey to Israel, which included days of walking in the desert.
I remember the chicken soup I brought to an elderly Jewish woman in Budapest on another Federation mission. She was dressed all in black, living on the 5th floor of a crumbling walkup.  She had escaped from the Nazis during World War II and come back to her home city, determined to pick up the pieces of her life.

I recall matzo ball soup served at the monthly Shabbat dinners that UJA sponsored in New York City, where I created a chevrah of friends who, to this day, are known as my "UJA friends."  And I think of the Sunday afternoons with these friends in soup kitchens and shelters, ladling soup to people in Queens and Harlem, Jews and non-Jews, who were having trouble making ends meet.

United Jewish Federation is all about the soup. We feed people who need food, we nourish people who need warmth, we provide community for those who are alone or seek company.

I am thankful to UJF for honoring me with the Harvey Peltz Award.  It has been pointed out that I am following in some mighty footsteps, men and women who know the true meaning of mitzvot and generosity.  I strive to live up to their examples.

Jeff, Emmet, and I are lucky to have a community who nourishes, feeds, and warms us every day.
Thank you to Gan Yeladim, Shorashim, JCC, and Carmel Academy who have imbued Emmet, and our family, with strong Jewish values and high academic principles.

Thank you to our synagogue, Temple Beth El and Rabbi Hammerman, for providing us with our spiritual home (and often our social playground).  I am proud to serve on the Board of Trustees of this wonderful place.

Thank you to those at United Jewish Federation, particularly Jim Cohen, Rebekah Raz, Sharon Franklin, the YLD Board, and my partner in crime Dana Horowitz.  I truly love and believe in this organization and it is my pleasure and honor to work with all of you.

Thank you to my friends, who are always supportive.  As one friend put it, "It's expensive to be Lisa's friend."  (It's all for a good cause).

Thank you to my parents for setting such an important example, all those years ago, for my sister and me, about the importance of community, tzedakah, and tikkun olam.

Thank you to my husband and Super Sunday co-chair Jeff, who understands these values as well and as deeply, and makes it possible for me to attend lots of meetings with only a minimal amount of guilt.  I am also trying to get him to join more committees.

And for those of you who don't know, Jeff and I are co-chairing Super Sunday this year, one generation after my parents chaired it before me. To everyone in this room, we look forward to your participation on February 1.  There will be a pot of soup waiting. 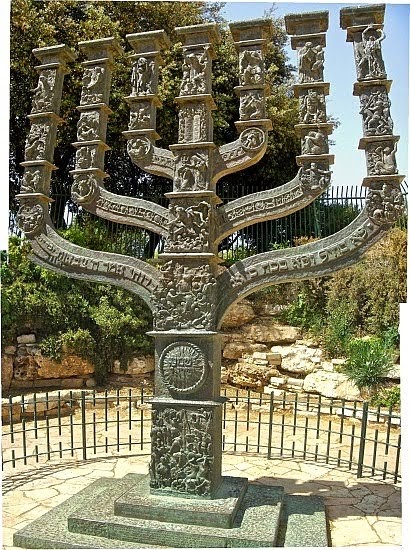