Join us tonight as we welcome Shulem Deen, who will speak about his riveting and heartbreaking book, National Jewish Book Award winner, "All Who Go Do Not Return."
Katie Kaplan will be co-leading the service with me tonight at 7:30, in Cantor Fishman's absence.

Tomorrow we will discuss the portion Yitro and the Ten Commandments, with some of our Hebrew School students joining us, in another of our successful "Shabbat School" weekends.

If you missed my photo essays from Israel last week, they've been revised and are now both featured on the Times of Israel site:  Jerusalem After Dark and The Scribbles on the Wall.  Check them both out (and if you like 'em, share 'em!).  You'll get a real feel for what I experienced on my recent visit to Israel.

Speaking of visits... our website for this summer's Jewish Heritage Tour of Central Europe is now live and we are taking reservations. Click here to check out the itinerary and other details.  You know, even the Pope will be joining us...sort of.  He'll be in Krakow (and Auschwitz) about a week after our visit this summer.   I've heard from more than enough people to warrant moving forward, so now is the time to put down deposits. Please know that if the trip is cancelled because of low registration, the deposits will be refunded in full. (If the trip is a "go" and you pull out for other reasons, the cancellation policy is explained on the site).  We are exploring air options - and there are several good ones - but flights should not be booked until we are 100% good to go.  So now is the time to sign up - and tell your friends.  Reservations will be accepted on a first-come, first-served basis.  As a little teaser, take this virtual journey of the brand new Polin Museum in Warsaw, which we'll be visiting. The museum traces the fascinating history of Polish Jewry.
Relationships

This Sunday, our temple leadership will be engaged in a retreat about engagement; our focus will be on nurturing relationships.  We've been reading Ron Wolfson's thought provoking book, "Relational Judaism," and we'll be discussing its treasure trove of ideas, all with the goal of weaving deeper connections between one another, and between ourselves and our families, community, our Jewish traditions and God.

Check out this article, which lays out Wolfson's thesis in great detail.

Ultimately, in order to grow our community - and to ensure our own spiritual growth - we need to encounter one another with honesty, selfless love and humility.  At a time when surveys show that  younger people leaving religion in droves (see chart below), we need to demonstrate to them - and to everyone - how indispensable it can be to develop deep connections with your religious community. 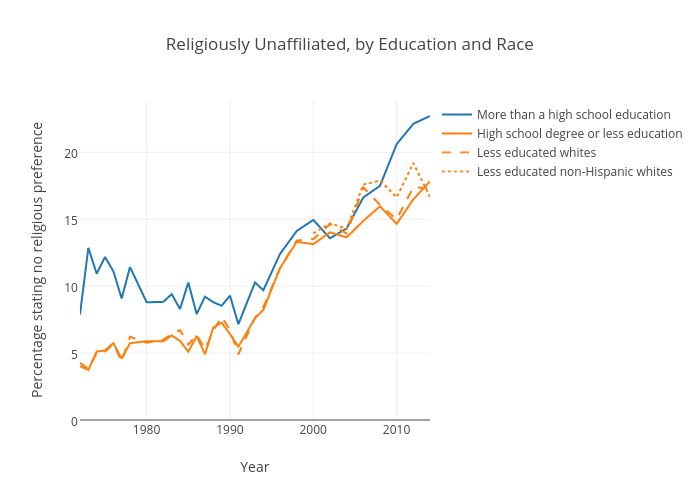 It is my hope that as we all move forward, we will work together to develop relationships that can in turn foster the qualities of menschlichkeit revealed in this chart below (click here for a clear version of it). 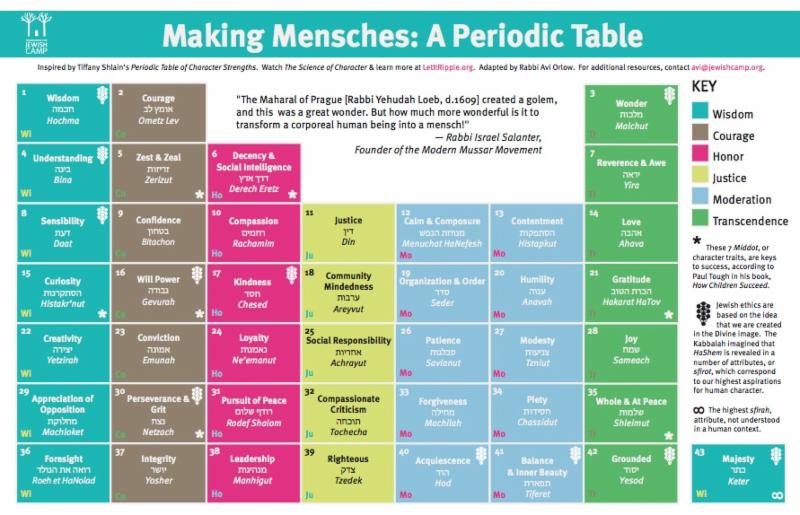 Josh Pickel, one of our teens, is on his way to movie immortality - and we can help him get there!  Part of his new zombie film, "E-19 Virus" was actually filmed at Beth El (no actual viruses were harmed in the making of this movie) and if you click hereand check the end of the trailer, you will see that Steve Lander, TBE and I are mentioned!  (I'd like to thank the Academy...).  You can order tickets to the one-night-only Connecticut premiere on Feb. 18.  The movie is also being shown at AMC Theaters in Los Angeles & Sacramento. Los Angeles is "SOLD OUT" and Sacramento is close to being sold out, and Connecticut is on the way.  If the film sells out in all 3 locations, AMC will add 6 additional theaters nationwide. If those 6 theaters sell out then they will add 12 additional and if that sells out it GOES NATIONWIDE to all AMC Theaters.   So here's our chance to help lift Josh to stardom.

Alex Weinberg, a TBE college student, sends a more sobering request.  Here it is, below:

"My name is Alex Weinberg and last year I had the privilege of studying in Israel at Yeshivat Maale Gilboa. While I have begun my freshman year in college, my Israeli friends have gone on to join the army, risking their lives for the Jewish State. One friend, Eldar, is currently in the Nachal brigade, 50th Battalion, 9th Company. He and the rest of his unit are raising money to buy socks, coats, and other essentials. If you would like to take part in this fundraising, please be in touch with him atEldar27p@gmail.com."

Thank you to Alex, for letting us know about this worthy cause.
The Moses Caucus and the Old Jewish Guy

So, with the caucus and primary season at last upon us, we naturally are asking, who would the Torah pick for President?  Well, in fact, in this week's portion Moses makes his choice.  And it's.... (drumroll, please)...Trump!  Oh, and Sanders! Oh, and everyone in between....

We actually discussed this at our "Hot Topics for Cold Months" class last Tuesday, which drew a large and extremely diverse group of learners, something that I really appreciated.

In this week's portion, Moses' father in law Yitro (Jethro, but not the guy from the Beverly Hillbillies) suggests to Moses that he delegate some of his leadership responsibilities, so that he won't continue to be overwhelmed by the many cases being brought to him by the rank and file.  The criteria they establish for choosing these new leaders is illustrative. If you take a look at this page of commentaries from the portion, you will see that one of the qualifiers is that the nominees be "capable men," ("Anshei Hayil," in Hebrew).  What does that expression mean?

Well, pick a commentator and you get a current candidate.  Rashi says, "Rich men," who are beholden to no one.  He would clearly be a Trump or Bloomberg supporter. Rashbam focuses on the quality of fearlessness.  Ibn Ezra looks for physical endurance, and one might say that Hillary has been around the political bock enough times to qualify.  Nachmanides is looking for wisdom and honesty, which frankly, means he is possibly thinking about writing in Larry David.  But then there's the next line in the Torah, the next qualification, "who spurns ill gotten gain," which Ibn Ezra immediately defines in one word: "money."  So he would be the Sanders delegate.

All of which goes to show us that political eligibility is in the eye of the beholder.   We'll see how the people of Iowa choose on Monday.

Two other points to make:

1)     The Torah is very committed to the idea that our leaders should be incorruptibly independent, owing nothing to anyone.  Peruse our packet from the Hot Topics classand you will see that the Talmud - and the Reform and Conservative movements - come down squarely Campaign Finance Reform and against the "Citizens United" decision.  See the Rabbinical Assembly's resolution.
2)     A word about the Old Jewish Guy. I may or may not support Bernie Sanders politically, but I LOVE the two unspoken messages coming out of his campaign: IT'S OK TO BE JEWISH AND IT'S COOL TO BE OLD.

Sanders is overtly Jewish in precisely the opposite way Joe Lieberman was.  His Jewishness pours forth in an ethnic tribal sense, and Lieberman's was expressed in terms of religious observance. Both are legitimate.  The fact that Jewish identity been not been seen as a political detriment in either case is both highly significant - and profoundly reassuring.  They love us!  They really love us!
But it's the "old" part - that's the real revelation.  I'm not just talking about the fact that he is older - so was Ronald Reagan and so are other current candidates - or that if elected he would become  the oldest president.  What's telling is that he doesn't feel a need to hide it and in fact seems very comfortable beneath his Ben Gurion bushel of gray.  And despite his visible senior-ness, or maybe even because of that, he is a rock star on campuses and is adored in almost Obama-like fashion by millennials and younger siblings.

This is really important, I think, and a reversion to an era long before old people were derided as irrelevant, out of touch, or worse (anyone recall  "Where's the Beef?" - and John McCain wandering about the debate stage?), back to a time when the Torah could state, "Rise before the aged," and the mitzvah of honoring the elderly drew more than lip service at retirement dinners.

I've seen it in the rabbinate and so many other professions, where wisdom and experience have been cast aside as congregations and corporations have sought to grow ever younger.  Even when I was a young rabbi, reaping the benefits of these distorted priorities, I questioned the logic of idolizing youth.  As I've grown and grayed, I've seen a dismaying acceleration of this trend, to the point where, from what I hear,  prestigious synagogues that once waited for candidates to turn 50 before even considering them for top rabbinic positions, now immediately filter out those who dwell in the valley of the shadow of 38.

But now we've ushered in the era of grandpa-chic, and Bernie is a rock star on campus. Maybe the kids themselves are telling us to "chill" about aging.  It's not unusual for young people to emulate the ways of their grandparents' generation - hence the return to electric typewriters, vinyl and Brooklyn.  I also understand that there may well be an unfair double standard when it comes to women.  But for an Old Jewish Guy to be rockin' like Bernie is, it's got to be reassuring for people of all ages and hairy hues.

And kids, GET OFF MY LAWN!
Shabbat Shalom!