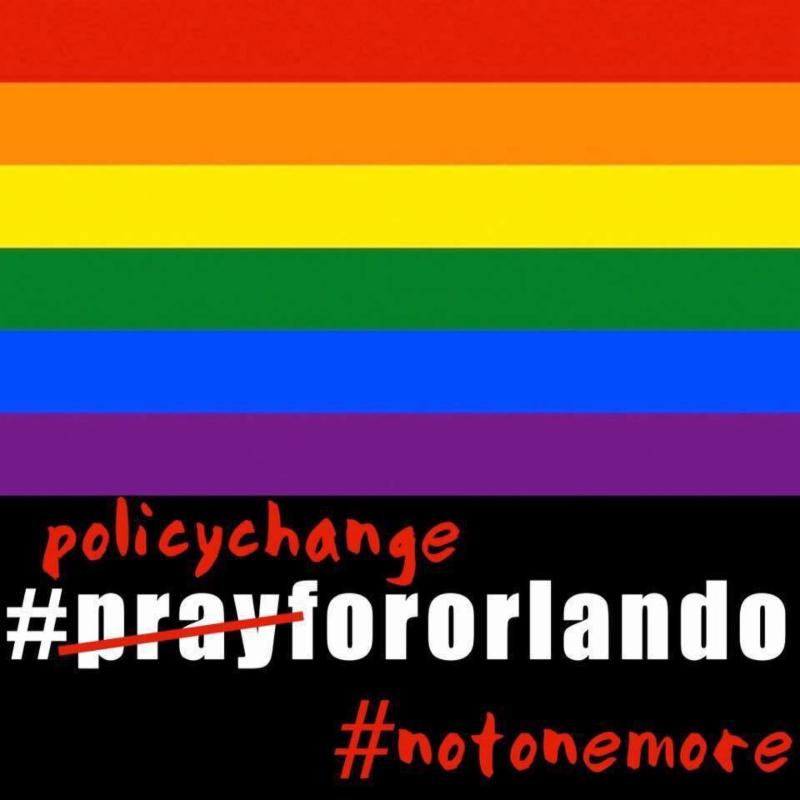 Shabbat Shalom
As we prepare to welcome our speaker at our Pride Shabbat, Idit Klein, executive director of Keshet, what can be called the foremost Jewish LGBT organization in the country, we are invited to sign Keshet’s Letter of Condolence to the Orlando LGBTQ community.  Click here for bios of Idit Klein, along with our talented musical guests.  Friday night’s service will be in the sanctuary, which after this past week, a deeper meaning than usual.  We want our home to be a place of sanctuary for all who are in pain right now.  We want this to be a safe place - and as a concession to this crazy world we currently inhabit, there will be added security to ensure that people will feel safer here.  I hope you can join us at 7:30.
Some thoughts as I try to make some semblance of this dreadful week.
Follow up on (((echo)))
Some old business.  Last week I wrote about dramatically increasing threat of anti-Semitic trolling on Twitter, and how many Jews, including me, have responded by adopting the “yellow star” type moniker those racists have assigned us, the (((echo))) symbol.  See the ADL’s response to this new provocation, as well as my featured op-ed in the Times of Israel on the topic, The anti-Semites, primarily White Supremacists, have especially been targeting journalists, though no one is off limits.  But we can’t be afraid to confront it.  Last Shabbat morning, I compiled some articles into this parsha packet,
The Rabbinical Assembly on Orlando
For those who didn’t see my prior message about Orlando, sent just after Shavuot, here it is.  Sometimes it’s best to let others find the proper words when you can’t... Here is the statement released this week by the Rabbinical Assembly:
“This shooting rampage targeted the LGBT community in the midst of Pride month, a time where the LGBT community comes together to publicly acknowledge and celebrate their identities, their common history, and their struggle for social recognition and equality. The RA has passed multiple resolutions calling on the community to 'work for full and equal civil rights for gays and lesbians in our national life, deplore violence against gays and lesbians, encourage inclusion of gay and lesbian Jews in our congregations, and increase our awareness of issues facing gay and lesbian Jews.' We know that we stand with people of good will of all faiths in continuing this work.
We urge the United States Congress and the President of the United States to take meaningful steps toward ending this horrifying violence in our communities by passing common-sense gun legislation. As recently as our May 2016 convention, the Rabbinical Assembly issued a resolution encouraging our members to lobby local, state and federal lawmakers to support required background checks on all public and private gun sales, bans on military style assault weapons and high-capacity magazines, and legislation making gun trafficking a federal crime with severe penalties.
As our Jewish tradition teaches us, lo ta'amod al dam re'eikha - do not stand idly by the blood of your neighbor (Leviticus 19:16). Our thoughts and prayers go out to all members of the LGBT community, their families, their friends and their loved ones.”
A Time for Noodgy Prayer
“Biblical Hebrew is all made out of verbs...it all starts in the doing and goes back to the doing. Why isn’t there a blessing for giving tzedaka to the poor? By the time you say the blessing, the man will die of hunger... spirituality cannot just be in what you think and what you feel - it has to be invested in what you do.” - Rabbi Ruth Gan Kagan
I thought of this quote while reading how our Representative, Jim Himes, declared that a moment of silent prayer no longer suffices as a proper response from a Congress that has done nothing to rid our country of the scourge of gun violence.  He further explained his logic in the Washington Post:

"All I know is that the regular moments of silence on the House floor do not honor the victims of violence. They are an affront. In the chamber where change is made, they are a tepid, self-satisfying emblem of impotence and willful negligence. It is action that will stop next week’s mass shooting.   I will not be silent."
No one doubts that we need to be focused on fighting terrorism - and ISIS in particular.  America is a great country that can focus on more than one thing at a time.  But look at the online Mass Shooting Tracker and you will see where the heart of our problem resides. As of Thursday morning, there have been six mass shootings in this countrySINCE ORLANDO.
In the quote at the top, Rabbi Ruth Kagan, founder of Nava Tehila in Jerusalem, expresses perfectly why, for Jews, prayer not only implies action, it demands it.  The one cannot exist without the other.
We Jews are very noodgy pray-ers, always moving, or “shuckling,” - Yiddish for shaking - as we call it.  Yes, we are the original Shakers (no wonder so many Jews live in Shaker Heights). Jews are always striving, swaying, wandering, wondering, but most of all, acting - and that prayer posture simply reinforces an outlook toward life.   You will never see Jews engaged in authentic Jewish prayer cupping their hands in that classic frozen prayerful pose of monastic lore.  While many Jews engage in Yoga or Buddhist meditation, and silence is a key to Hasidic contemplation, the hallmark of Hasidic worship is ecstatic singing and dancing, not stilled silence.
There is room for silence in Jewish prayer, but not for immobility.  Just as Abraham Joshua Heschel called the Sabbath the rests between the notes, prayer, like music itself features those rests - but only in order to highlight the notes.
Heschel also famously described prayer in terms of action:
"For many of us the march from Selma to Montgomery was about protest and prayer. Legs are not lips and walking is not kneeling. And yet our legs uttered songs. Even without words, our march was worship. I felt my legs were praying."
The fact that Jews are always transforming words into deeds also explains the penchant for annoying rabbis like me to always be advocating for this cause or that.  Truth be told, that political activism, is a direct extension of our prayers.  If we are praying, our hands, minds, hearts and consciences are moving, along with our feet.
The mobility of Jewish prayer invites comparison to other faiths.  I find inspiration in, of all things, a sublime Hindu symbol, the Shiva Nataraja. Shiva is the King of Dance, often depicted in a state of absolute motion, with arms and legs contorted in all directions, yet with an unfathomable serenity on his face. With one leg he maintains complete balance while another flails, and his out-stretched arms appear to be lifting up the world effortlessly. He is the center of all activity, the culmination of endeavor. In the words of religion scholar R.C. Zaehner, "He dances in the sheer joy of overflowing power - he dances creation into existence."
OK, so the Dancing Shiva is a graven image. Minor technicality. Dancing wasn't patented by the Hindus; not even Zorba has a monopoly on it. We Jews, although historically long on verbosity and short on choreography, have had our great Lords of the Dance as well, including Miriam, David and a host of Hasidic masters, not to mention Tevye the Dairyman's various incarnations.
Yes, silent, motionless prayer by itself is not enough.  What Rep. Himes complained about on the House floor is something Judaism would never countenance.  Ours is the Church of Perpetual Motion.  When Jews pray, Jews dance, celebrate, ruminate and self-motivate.
And we actuate.
Rabbi Danielle Upbin wrote this week:
“When youth is cut down in its prime, Prayer is not enough. When pulsing rhythms turn to blood and tears, Prayer is not enough.  When terror and hate are disguised as justice, Prayer is not enough.”
It is not enough, but, when it is typically Jewish noodgy prayer, it is a very good place to start.
The power of prayer to heal and forge deep connections is undeniable.  And there are people out there who need that supportive hug in a safe place, now more than ever.  Please encourage them to be here with us this evening at 7:30.  We’ll be huddled in our cozy sanctuary - and, in an unfortunate sign of the times, we’ll have added security.  Few groups have felt a greater sense of vulnerability and violation than LGBT and Jews. Friday evening, here, everyone should feel safe.
Shabbat Shalom
Rabbi Joshua Hammerman
Posted by Joshua Hammerman