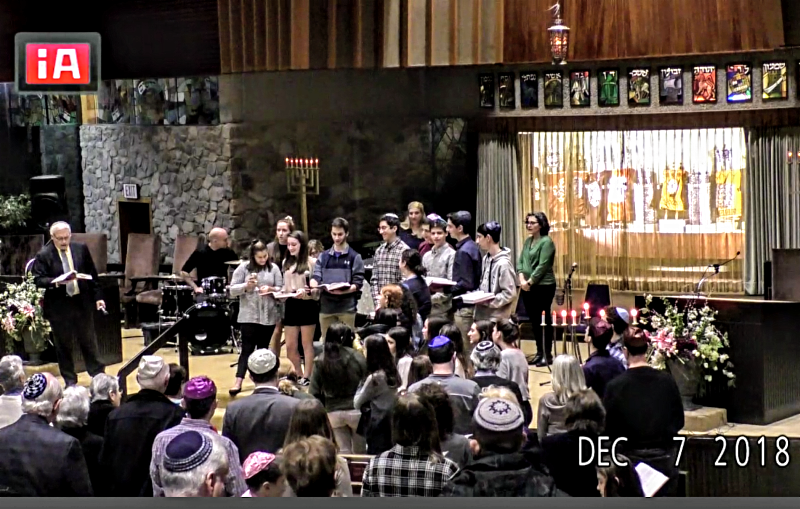 
Watch an archived video of the service

With Hanukkah behind us and winter on our doorstep, join us on Friday night for our musical Kabbalat Shabbat and to hear Rabbi Geoff Mitelman talk about "Sinai and Synapses." Then come back on Shabbat morning for another "Shabbat in the Round," our renewal-style alternative, meditative experience, beginning with breakfast at 9:30.

It has been another challenging week, for our community, with several untimely deaths, and for Israel as well, with multiple terror attacks, including one that took the life of a mother and her baby, and the killing of a woman in another domestic violence incident. Over 24 women have died in such incidents this year, a trend that has caused great concern among Israelis.

If you are looking for a snappy new source of basic info on Jews and Judaism, geared especially to those who feel a little (or a lot) uncomfortable in Jewish settings, check out jewbelong.com.  You can peruse their new Ten Commandments or be inspired by their selection of life wisdom readings.  This site was recommended to us by our mentor at Interfaith Family's Interfaith Inclusion Leadership Initiative (IILI).  We are part of their nationwide cohort of about a dozen synagogues and the coaching has been very helpful.  Our Keruv (Inclusion) Committee plans on sharing some of what we've learned soon, but meanwhile, just know that "JewBelong" (Jew really do!) - and check the site.

Here's one of the wisdom readings that they feature:

To open eyes when others close them. To hear when others do not wish to listen. To look when others turn away. To seek to understand when others give up. To rouse oneself when others accept. To continue the struggle even when one is not the strongest. To cry out when others keep silent. To be a Jew it is that. It is first of all that. And further, to live when others are dead and to remember when others have forgotten.
-Emmanuel Eydoux

"The Jews are not Disappearing"

Two weeks ago, Middle East analyst Marc Schulman spoke here, and we received a noteworthy shout out in his Newsweek column this week.  I highly recommend that you read the entire column (what's here is a preview of the Newsweek piece), but here's what relates to us:
------------
"On Sunday, Naftali Bennett, head of the right-wing religious Jewish Home Party and Minister of Education and Diaspora Relations stated:


"There is an unprecedented crisis between Israel and the Jewish diaspora. They like to say it's because of the Western Wall, or the Palestinian question or other ideological problems. That's not true. The reason is a major problem of assimilation and that more and more Jews around the world don't care about their Judaism and don't care about Israel. That is the whole story."
...On the off-chance Bennett happens to be reading. Forty years ago (in my youth, before I first moved to Israel), I believed that diaspora Jewry would indeed assimilate and disappear. However, a week ago, on a Friday night, I stood in front of a full room in a Conservative synagogue in Stamford, CT packed with people who had come to both celebrate their Judaism, through participation in a Friday night service and hear me speak about American Jewry and Israel in the Trump era. Those Jews are not assimilating and disappearing. They have not stopped caring about Israel and their Judaism. However, they are having a tough time identifying with an Israel that has so identified with President Trump. They are having a hard time connecting with a country that is being pulled ever further to the right by your party, and they are having an impossible time understanding why your party has consistently worked to block their stream of Judaism from being recognized. ...Minister Bennett, perhaps you should look in the mirror before you criticize diaspora Judaism."
----------------
You can take Marc's assessment of the political mood of American Jewry as you will (Marc spent a lot of time speaking with congregants after the service), but I was especially pleased to see his comments on the vibrancy of the congregation and our service.  Yes, he's right. We "celebrate our Judaism."  We don't just go through the motions and call it Judaism.  Lenny Bruce used to joke that Christians celebrate holidays, while Jews "observe" them.  No, Lenny, and yes Virginia, Jews celebrate our Judaism - and we are constantly reinventing it to keep it vibrant.  So, Naftali Bennett, we invite you to come to Stamford and check us out.  Thank you for the shout out, Marc Schulman!

Oh, and for those who were here that night, did you notice that much of what Marc spoke about regarding Prime Minister Netanyahu's legal challenges suddenly burst into the headlines the very next day?  He gave us some valuable background to what is undoubtedly going to be a major story through 2019.

Some more follow-up on Marc's visit.  For my final question of the Q and A, I asked him for positive suggestions as to how to revitalize the relationship between American Jewry and Israel.  He suggested that people think small, that we find projects that are near and dear to us. So for instance, those who love dogs (a random suggestion for me) and who are concerned about helping those with disabilities might want to support the Israel Guide Dog Center, which since 1991 has dramatically improved the quality of life for visually impaired Israelis, including wounded soldiers. We've even helped some of those dogs learn Hebrew, when they've visited us. 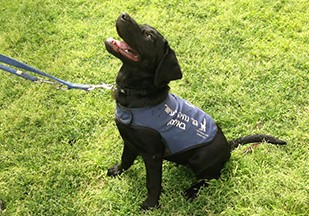 For the past ten years, The Good People Fund has called to our attention hundreds of mitzvah opportunities, here and in Israel. Download their new Annual Report and see for yourself how you can help to repair the world. With people especially attuned to tzedakkahat this time of year, let The Good People Fund be your guide and inspiration.  It's a great resource for mitzvah projects - or just for the family to sit around the table and discuss how they want to share their bounty this year.
Earthrise

As we mark the first official day of winter next Friday, we recall the 50th anniversary of an image that changed everything, the Apollo 8 color shot of the earth rising over the moon's horizon. 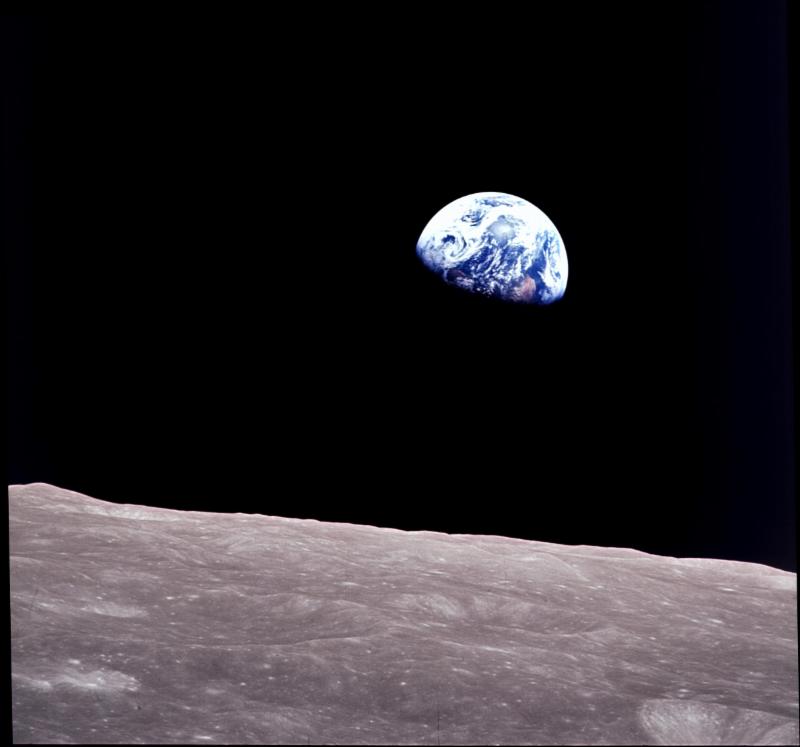 See the story behind that famous photo:

See also a recent documentary that premiered in the Tribeca Film Festival, seeking to explain that event to those who were not yet alive fifty years years ago.  Astronauts experienced (and through them, so did we) what author Frank White first dubbed "the overview effect" - a psychological effect that occurs when seeing the Earth from a distant vantage point shifts a person's perspective.

Those who were alive will recall the deep impact of our seeing the moon up close for the first time, as the Apollo 8 astronauts recited the opening words of Genesis on Christmas Eve.  You can watch it here, as it happened (the reading is about five minutes in):

So here it was, fifty years ago, that arguably the greatest scientific achievement of all time became simultaneously a moment of profound spiritual meaning, and the words chosen to encapsulate that moment were from the sacred text that so many humans share.  How was such a partnership so smooth then, and yet now so many perceive science and religion as being in perpetual conflict?  That was the question I raised in my Kol Nidre sermon this year.

Rabbi Geoffrey Mitelman is founder of the startup, “Sinai and Synapses,” whose goal is to bridge the religious and scientific worlds, offering people a worldview that is both scientifically grounded and spiritually uplifting.  I am hoping that Rabbi Mitelman’s visit will just be the beginning of a lengthy and fruitful dialogue and I’m calling upon people of science in our congregation to step forward and participate. “Sinai and Synapses” is fostering dialogues in a number of congregations; we'll hear about them on Friday night.


We saw with Apollo 8 just how religion and science are indeed partners in this expanding universe of knowledge and questioning.  We should be wary of any groups, including Jewish groups, that refuse to accept the validity of science.  The future of our planet is at stake. The unbounded search for truth can bring us together and should never be allowed to drive us apart.

I close with a poem by the great Indian writer Rabindranath Tagore:
Where the mind is without fear and the head is held high
Where knowledge is free
Where the world has not been broken up into fragments
By narrow domestic walls
Where words come out from the depth of truth
Where tireless striving stretches its arms towards perfection
Where the clear stream of reason has not lost its way
Into the dreary desert sand of dead habit
Where the mind is led forward by thee
Into ever-widening thought and action
Into that heaven of freedom, Heavenly Parent, let my country awake.
Finally for this week, sign up (flyer below) for a new adult ed class beginning in January, based on my upcoming book, Mensch·Marks: Life Lessons of a Human Rabbi - Wisdom for Untethered Times. 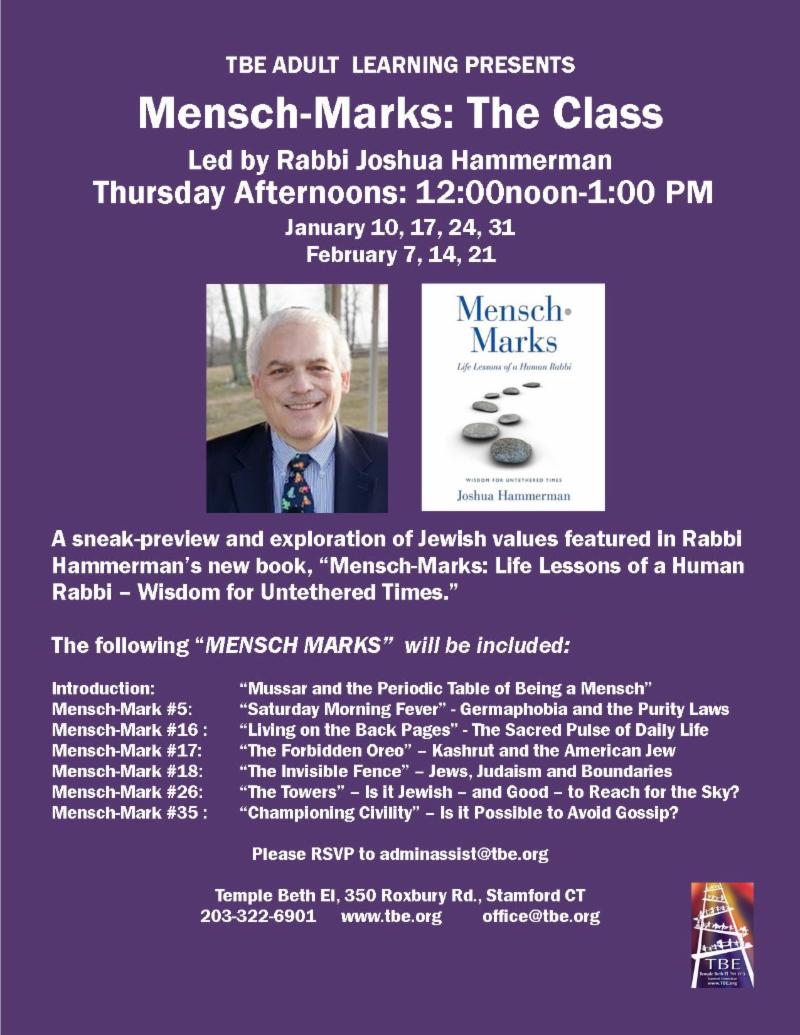