5780: Regression from the meanness (Times of Israel) 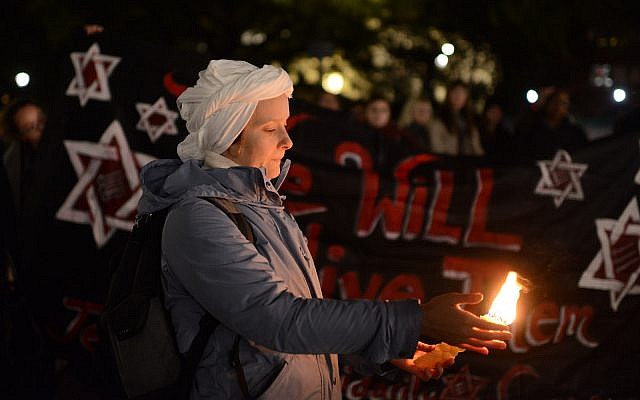 A Jewish woman holding a candle, with a "We Will Outlive Them" banner in the background, at a New York vigil for the victims of the Tree of Life synagogue shooting in Pittsburgh. (Gili Getz)
This coming week, for the first time in history, American Jews will be flocking to High Holidays services while residing in an America where Jews have been murdered while at prayer in their synagogues. This past year has been marked by the Pittsburgh and Poway pogroms, along with a jarring increase in the number and brazenness of anti-Semitic attacks. Our safety can no longer be taken for granted.
It was a year marked by unprecedented levels of meanness, punctuated by the president of the United States accusing American Jews of ignorance and disloyalty. Partly due to our divider-in-chief’s efforts to turn Israel into a wedge issue, internecine squabbling has intensified within the Jewish community as well. The old joke about “Two Jews, three opinions” has been adjusted to, “Two Jews, and they’re not talking to each other.”
So it would seem that things could not get meaner. On one level that’s true. But something else is happening. 5779 was a watershed year for American Jews, both because of Pittsburgh and how we responded to it.  Rather than subscribing to the “oy gevalt” school of Jewish victimhood and self-pity, Jews took to the streets and their synagogues with a growing resilience and courage, forming new alliances with their non-Jewish neighbors and reaffirming ties to their tradition.
I’m sure there was a good deal of fear, just as there will be next week.  Face it, the events of the past year, when combined with the lack of a strong anti-hate message from the White House, give us little reason to believe there won’t be some attack on Jews somewhere in America over the coming holidays, possibly several. What we’ve seen is in fact a full-scale regression from the meanness. I first noticed it on the weekend after Pittsburgh, a time when it would have been logical for Jews to lay low in their bitterness and fear. Instead, they showed up at their local synagogues in extraordinary numbers. Spurred on by the AJC’s “Show Up for Shabbat” campaign, hundreds of thousands of American Jews emerged from their psychological bunkers on that watershed week. My own congregation was packed that night, filled with people who wouldn’t have been caught dead in a synagogue the week before, coming to honor 11 innocents who were shot dead in theirs.
We have the honor of being despised by the extreme right and the extreme left — by extremists who happen to be Muslim, extremists who happen to be Christian and extremists who happen to be secular. We are, in fact, the glue that brings the far right and far left together.  Jeremy Corbyn, the Ayatollah Khomeini, Louis Farrakhan and David Duke don’t have much in common, except that they all hate us and they think the Holocaust never happened. If they were ever stuck in an elevator together, that’s what they would talk about.
Despite this, Jews are continually taking the high road, demonstrating to the world that the ends don’t justify the meanness. This past year, the old post-Holocaust mantra “Never Again!,” created in the 1970s by Meir Kahane’s Jewish Defense League as a call to vigilante vengeance, was usurped by young progressives who established “Never Again Action” to defend migrants facing deportation. “Never Again” had already found its way to the streets of America a year before, in the cries of the Parkland students and the anti-gun-violence movement they spawned. And now, the Kahanists have yielded that post-Holocaust refrain to the spiritual disciples of Heschel and MLK on the streets of American cities. Simultaneously in Israel, the one clear message of last week’s otherwise inconclusive election was the decisive rejection of the Kahanist Otzma party.
“Never again,” Jews everywhere are declaring; will Kahane’s racist vitriol be allowed to infect the Jewish soul.
The response to cruelty is visceral and universal. One photo of a dead girl and her father in the Rio Grande outweighed a thousand presidential tweets warning of an “invasion.” In July, xenophobia in this country hit a new low with race-based attacks that included the charge from the White House bullying pulpit that several people of color — elected representatives — should go back “from whence they came.”
In Pirkei Avot 3:1, Rabbi Akvaya gave perhaps the best Jewish comeback ever to that hateful assertion:

Reflect upon three things and you will not come to sin. Know from where you came and where you are going and before whom you are destined to give account and reckoning. From where have you come? —from a putrid drop. Where are you going? — to the place of dust, worm, and maggots. Before whom are you destined to give account and reckoning? — before the Holy One, blessed be God.

The rabbis understood that we all come from humble biological beginnings and we’ll all end up in the same maggot-infested place, six feet under. So if anyone ever has the insolence to tell you to go “back where you came from,” call ‘em a putrid drop. But do it politely.
And memo to anyone, of any party, who would accuse Jews of dual loyalty. We can love more than one country at a time, because we care for all of humanity. Loyalty never should  end with one’s own tribe. At the end of the day, there’s no “us and them.” There’s only an ever-expanding “us.”
In First Samuel 19:20, we read:

And Saul sent messengers to arrest David; and when they saw the company of the prophets prophesying, and Samuel standing over them, the spirit of God came upon the messengers of Saul, and they also prophesied.

Saul’s messengers came to harm David, but they were so taken by the pure, tender faith displayed by Samuel that these thugs instantly melted into angels of mercy.
If you take the numerical value of each Hebrew letter of that verse, using the kabbalistic tool of gematria, the sum total — which occurs for no other verse in the Bible — equals 5780.
So let that verse inspire us to proclaim 5780 as the year when meanness will meet its match and kindness will at last prevail.
—
Rabbi Joshua Hammerman is author of “Mensch-Marks: Life Lessons of a Human Rabbi” (HCI Books) and “Embracing Auschwitz,” to be published in early 2020 by Ben Yehuda Press. This week he was awarded first place for commentary in the 2019 Religion News Association Awards for Religion Reporting Excellence.
Posted by Joshua Hammerman

Email ThisBlogThis!Share to TwitterShare to FacebookShare to Pinterest
Labels: Ethics: Being a Mensch, rosh hashanah, times of israel