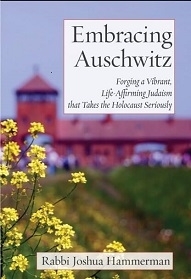 I have a cynical friend who claims that there have been more books written about the Holocaust than there were people who perished in it. That is, no doubt, an exaggeration, but it is true that most of the books on this subject sound very much alike. Joshua Hammerman’s Embracing Auschwitz (Ben Yehuda Press) deserves our attention because it is by far the most original book on this subject that has come along in a great many years.

It acknowledges right up front that this was the darkest time in all of human history, but it affirms that this generation can achieve new visions of faith and strength – and even joy – out of a confrontation with it. And I don’t know of anyone who has said anything like that before.

He tells what he learned the first time that he was on a bus with a group of teenagers on the way to the hell-on-earth that was Auschwitz. He expected them to be feeling an overwhelming sense of dread, but when he looked around, he saw that these kids were trading their school pins and their sweatshirts and displaying an astonishing amount of teenage hormones… and he realised that they were the ultimate repudiation of the Nazis’ intentions.

Right there, right on the way to the centre of the valley of the shadow of death, these kids were expressing the excitement of life, and they were thereby demonstrating that the Final Solution was not so final after all.

And it is here that Hammerman offers his boldest idea, an idea that offends us when we first hear it, an idea to which our first reaction is that this is something that goes beyond the boundary of what a Jew can say. He proposes that there are now two Torahs that we must learn how to live with: the Torah of Sinai and the Torah of Auschwitz, and that each has validity, and each has lessons to teach us.

A Torah of Auschwitz? Is that phrase not the ultimate oxymoron? Surely, we can take pride and give honour to those who wrote poetry and composed songs even in the bowels of Hell without using a phrase like this one.

Surely we can stand in awe of those who shared their scraps of food, and those who held Seders in secret, and those who escaped by crawling through sewers, and those who somehow preserved a bit of their humanity in that most inhuman of all places, without calling that world a place of Torah.

How can we talk of a Torah of Auschwitz? Is not such a phrase a desecration and a perversion of the whole Jewish tradition, which stands on the Torah of Sinai?

And yet, Hammerman declares that our perception of God, of ourselves, and of our purpose in the world will be transformed when we begin to see them through the prism of Auschwitz. The Torah of Sinai has not been abrogated, but we will understand it differently in confrontation with one that is sometimes much harsher and sometimes much gentler: the Torah of Auschwitz.

The rest of this book is a description of some of the ways in which these two Torahs differ and yet are intertwined. Hammerman tells us how he and his travelling companions found once-abandoned synagogues all over Eastern Europe now rebuilt with the names of every single person in their community who was killed by their Nazis inscribed upon their walls.

In some cemeteries, they found tombstones that had been overturned and desecrated with swastikas, but in others they saw tombstones that have been restored and repaired so that the names that are inscribed on them will not be lost.

They remembered the words of Simon Wiesenthal, who said that he envied those who were fortunate enough to have graves instead of just being thrown into rivers or into ditches. And he envied even more those that had sunflowers planted on their graves, because the sunflower is known in European folklore as the flower that remembers.

Hammerman recounts that the young people on this trip came away from this experience with the determination to be sunflowers to the next generation. He says that when you listen to a witness, you become a witness.

And so these young people resolved that when they came to Yad Vashem they would look up the names of these people in the archives, so that, when they got home, they could tell their congregations the stories of their lives, and not just their deaths.

Hammerman finishes this account of all the different collections of names that they saw wherever they went with this turnabout on one of the mitzvahs that is found in the Torah of Sinai. When they came to Berlin, they saw bricks on the sidewalks that you could stumble over, and therefore could not help but notice. These bricks are called stolpersteine, which literally means, “stumbling stones.” Each one is inscribed with the name of the person who once lived here, who was taken away to his death from here, a name that must not be forgotten.

The Torah of Sinai says that you must not put a stumbling block before the blind, for if you do, you may cause him to fall. The Torah of Auschwitz says the very opposite: that stumbling blocks make people look down and see the names of those whose names they would rather not see.

You will not be the same after you have read this disturbing book. It will force you to see God as the One who was with us in Auschwitz, who suffers with us, and who needs us.

Brace yourself to read a book that is sometimes painful, sometimes funny, and often inspiring. Brace yourself so that you can acquire a whole new perspective on who we are and what our purpose is. Brace yourself, even though you will put this book down many times along the way and wish that it were wrong. Brace yourself because you will learn that we are all survivors and that perhaps God is too.

Rabbi Jack Riemer is the author of Finding God in Unexpected Places and The Day I Met My Father Isaac at the Supermarket. 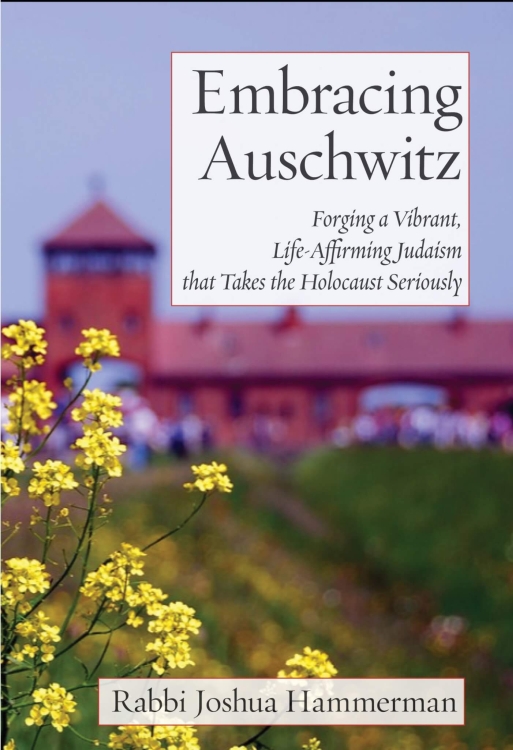