Fight or flight: the rabbi, the journalist and the protester in Sodom 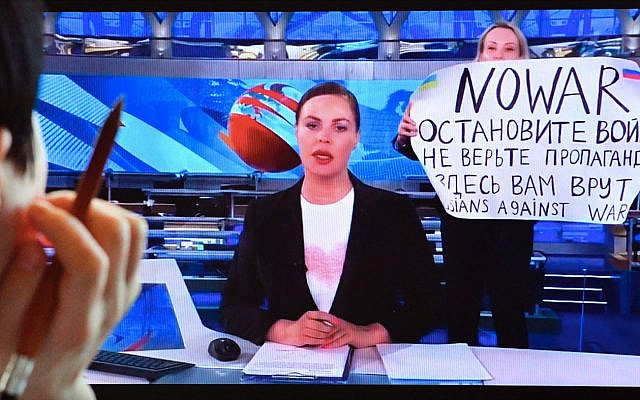 Elie Wiesel often told a parable about the man who stood at the entrance of Sodom, crying out against the injustice and evil in that city. A passerby said to him, “For years you have been urging the people to repent, and yet no one has changed. Why do you continue?” He responded: “When I first came, I protested because I hoped to change the people of Sodom. Now I continue to cry out, because if I don’t, they will have changed me.”

That parable came to mind as I watched the heroic moment of Marina Ovsyannikova, the now famous protester on Russian TV. I can not imagine having the courage to do that. And were I President Zelensky a few weeks ago, I probably would have hightailed it to a safe place to set up a government in exile when offered that chance by the Americans.  Were I one the leaders of the three nations that visited Kyiv a few days ago, I probably would have opted for a conference on Zoom.  But that is not the path these heroes have chosen.

This question that has been haunting me lately, since long before Ukraine was on the front pages: When your job requires you to go against your deepest held principles, is it better to raise your voice in protest – or cut and run, and let that be your statement?

Skip Ad
Fight or flight is a choice we all have to make at some point in our lives.  Had the 2020 U.S. election gone in a different direction, many millions of Americans would have seriously considered it.  In hindsight, the correct answer is always clear.  But in the heat of the moment, it almost never is.  Three million Ukrainian refugees are making that choice as we speak.

According to the Guardian, Ovsyannikova had becoming increasingly frustrated during the days before her act, feeling shame at her role in spreading Kremlin propaganda.  But she could have left.  President Macron offered her asylum in France.  But she said that as a “patriot,” she preferred to remain in her home country.

Contrast her decision to that of Liliya Gildeyeva, who quit her top anchor role on Russian TV in the wake of Ovsyannikova’s action.  She made sure she was safely in exile before releasing her written resignation. Is Gildeyeva any less courageous?  Will her flight to freedom be any less impactful over the long haul, as she continues to protest, while her colleague is preoccupied by potential imprisonment?

Were Charles DeGaulle or the Dalai Lama less influential from their exilic perches, than they would have been had they remained at home to face near-certain death?  Was Moses wrong to have fled Egypt to Midian – and was he wrong to return?  Jeremiah?  Einstein? Even Natan Sharansky, whose fight was legendary but was in fact a fight for the right to flight.

For religious leaders, the question comes up whenever we choose a community to serve.  Am I looking to challenge those whose views differ from mine, or would I prefer to “preach to the choir?”  In Texas, clergy have been behind legal efforts to overcome the state’s new draconian abortion laws.  After facing defeats in the courts, Rev. Daniel Kanter, a plaintiff in the most recent lawsuit, said they will continue helping pregnant people get safe and legal abortions in other states.

I wonder: Could I ever be a rabbi in a place that doesn’t share my basic values? It’s fine for a clergy to have differences of opinion with individual congregants, but if an entire state were lined up in opposition to my core principles, is that situation sustainable – or is it in fact optimal?  If I were in Texas now, would I stay and fight the good fight or cut and run to a place where I wouldn’t have to scream so loud and so often? Is it a betrayal of duty to simply want to pick one’s battles?

This question arose after the recent attack in Colleyville, Texas, when it came to light that Rabbi Charlie Cytron-Walker had already commenced a job search before his heroic act, and one reason cited for the breakup was his reluctance to accept open-carry of firearms, a policy desired by some congregants. “We don’t feel that open carry should be a part of a synagogue service,” the rabbi said.
Now presumably, the topic of open carry would never come up at a synagogue board meeting here in Connecticut, even in these times of synagogue shootings.  I live just 30 miles from Sandy Hook – so I can press my fairly progressive views on gun safety without ruffling many feathers.
And why would any rabbi who believes in LGBTQ inclusivity (or inclusivity in general) want to serve in a state like Florida, where a something like the “Don’t say gay” law is likely to be passed?  Were I in Florida right now, I’d be screaming to the rafters about this policy – and probably not making many friends on the synagogue board.  Florida, after all, is the state where a rabbi was fired for protesting Donald Trump’s appearance at AIPAC in 2016.  And were I in Tennessee…Well, how could I serve in a state with a county that bans “Maus?” If I lived there, I’d be reading my copy of “Maus” 24/7 on street corners.
So I wonder, is it worth it to spend one’s entire allotment of divinely granted spiritual energy protesting at the gates of Sodom?  Or is that precisely what I should be doing?
Through her boldness, Marina Ovsyannikova may not change the hearts and minds of many in her home country.  She, like Zelensky, is a hero for the ages.  The people of Sodom may never learn. But courage resonates and word gets around, and Gomorrah is just up the road.
Posted by Joshua Hammerman

Email ThisBlogThis!Share to TwitterShare to FacebookShare to Pinterest
Labels: times of israel