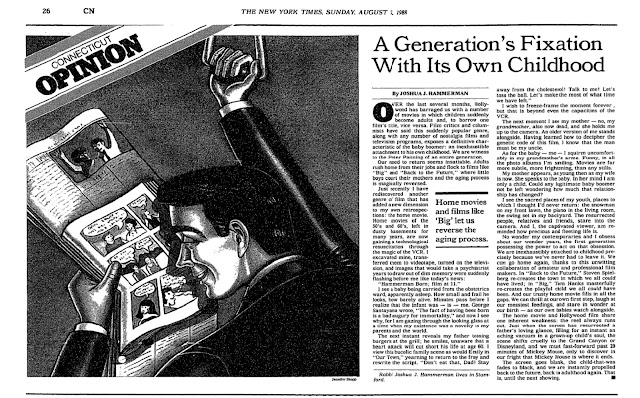 Perhaps THE defining characteristic of the baby boomer is his inexhaustible attachment to his own childhood. Our need to return seems insatiable. Adults rush home from their jobs and flock to films like "Back to the Future" and "Big," where little boys court their mothers and the aging process is magically reversed.
Just recently I have rediscovered another genre of film that has added a new dimension to my own retrospections: the home movie. Home movies of the '50s and '60s, left in dusty basements for many years, are now gaining a technological resuscitation through the magic of the V.C.R. I excavated mine, transferred them to videotape, turned on the television, and images that would take a psychiatrist years to draw out of dim memory were suddenly flashing before me like today's news: "Hammerman born; film at 11."
I see a baby being carried from the obstetrics ward, apparently asleep. How small and frail he looks, how barely alive. Minutes pass before I realize that the infant was - is - me. George Santayana wrote, "The fact of having been born is a bad augury for immortality," and now I see why, for I am gazing through the looking glass at a time when my existence was a novelty to my parents and the world.
The next instant reveals my father tossing burgers at the grill; he smiles, unaware that a heart attack will cut short his life at age 60. I view this bucolic family scene as would Emily in Thornton Wilder's "Our Town," yearning to return to the fray and rewrite the script. "Don't eat that, Dad! Stay away from the cholesterol! Talk to me! Let's toss the ball. Let's make the most of what time we have left." I wish to freeze-frame the moment forever, but that is beyond even the capacities of my V.C.R.
The next moment I see my mother - no, my grandmother - also now dead, and she holds me up to the camera. An older version of me stands alongside. Having learned how to decipher the genetic code of this film, I know that the man must be my uncle. As for the baby - me - I squirm uncomfortably in my grandmother's arms. Funny, in all the photo albums I'm smiling. Movies are far more subtle, more frightening, than any stills.
My mother appears, as young then as my wife is now. She speaks to the baby. I although I hear none of the dialogue in these silent flicks, it is clear that in her mind I am only a child. Could any legitimate baby boomer not be left wondering how much that relationship has changed?
I see the sacred places of my youth, places to which I thought I'd never return: the snowman on my front lawn, the piano in the living room, the swing set in my backyard. The resurrected people, relatives and friends, stare into the camera. And I, the captivated viewer, newly mindful of how precious and fleeting life is, wonder if that is what they are trying to tell me.
No wonder my contemporaries and I obsess about our wonder years, the first generation possessing the power to act on that obsession. We are inexhaustibly attached to childhood precisely because we've never had to leave it. We can go home again, thanks to the unwitting collaboration of amateur and professional film makers.
In the "Back to the Future" series, Steven Spielberg created the town in which we all could have lived; in "Big," Tom Hanks masterfully recreated the child we all could have been. And our trusty home movie fills in all the gaps. We can thrill at our own first step, laugh at our messier feedings and stare in wonder at our birth -- as our own children watch alongside.
The home movie and Hollywood film share one inherent weakness: the reel always runs out. Just when the film has resurrected a father's living glance, filling for an instant an aching vacuum in a grown-up child's soul, the scene shifts cruelly to the Grand Canyon or Disneyland, and we must fast-forward past twenty minutes of Mickey Mouse, only to discover in our fright that Mickey Mouse is where it ends. The screen goes blank, the child-that-was fades to black, and we are instantly propelled back to adulthood again.
That is, until the next showing.
Posted by Joshua Hammerman