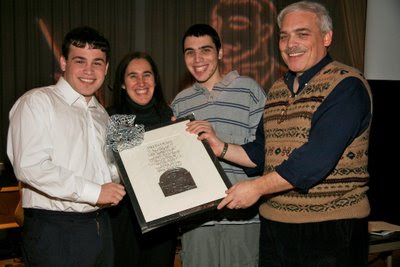 This past Saturday night, Mara and I were honored at TBE's annual "Temple Rock Cafe." Among the fabulous highlights of the evening was the surprise appearance of Ethan and Dan, who posed with us for the above photo, holding a lovely framed print with the inscription, "It is not for us to complete the work, but neither may we desist from it."
After over two decades here in Stamford, we realize that the work can never be completed in one generation. But twenty years allows us to look back at what we've accomplished together. "Temple Rock" in itself is an indication of the culture that has taken hold. Beth El's culture is caring, informal, inquisitive, honest and warm. You see no black ties in the photo - no need for people to get all dolled up to be in their spiritual home, even for a major event. No need to pretend to be what you aren't. In an age where authenticity is valued because there is so little of it out there, where we're rapidly losing faith in the integrity of institutions and people whom we used to trust, it's so important to have a home base where we all can simply be who we are. In hyper status conscious Fairfield County, that is no mean trick.

At TBE, we took off our ties even before they started doing it in the Oval Office! We do dress up from time to time, for sure, but appearances and pretense tend to take a back seat. There is too much work to do to get all caught up in posturing and politics. Don't get me wrong, every synagogue has some posturing and politics, but we've set our sights on the big picture - and the important work that must be done, which can only be accomplished together.
As if to illustrate how important that work is, the very next day, Sunday, the same venue was filled again - this time for one of the saddest days of my rabbinate, the funeral for a beautiful young soul, Dana Kraus, who was 23. Dana's passing made Temple Rock a bittersweet event for many of us, but it also reminded us why we are here, and why it is so important to sustain our synagogue. Where else can we turn at our happiest moments and our most tragic? Where else can we truly become One Community, while at the same time be unafraid to be ourselves?
Mara and I are so grateful for the chance to have served this community for so long, that our kids could grow up with the congregation (and now be active leaders in their own right) and that the lines between private and public, between my family and yours, has become as irrelevant as black tie dinners. People have always allowed us the space we've needed, but in fact, we've needed very little. It was never about "my kids" or "your kids".... all of them have been "our kids."

I wish there were a secret formula for success in the American rabbinate. Some have called it a tragic profession, because success cannot really be measured and because, by definition, the task can never be completed. Even the knowledge that "ours is not to complete the task" cannot diminish the frustration of taking a step backwards for every two in the right direction.


If "Rent" measured a life in love, I think I'd take a cue from my father and measure a rabbi's success in menschlichkite. That was his motto, "Be a Mensch," and that motto has translated into the role model that I've tried to be. I happened to marry a mensch (or menschette) as well, and I think we've raised two of them. In fact, I think we may have raised a few more.
Leo Rosten (as quoted in Wikipedia), defines mensch as "someone to admire and emulate, someone of noble character. The key to being “a real mensch” is nothing less than character, rectitude, dignity, a sense of what is right, responsible, decorous." If at the end of the day, my wife and I have helped to nurture and raise a congregation filled of real menschen, that will be the true measure of success. We happen to have that right now - led by a menschy board and a president who is a living legend in the Mensch Hall of Fame. But we know that menschiness feeds on menschiness - it can only be sustained if it is constantly nurtured.
Take a look at the musical montage prepared for the evening, which perfectly demonstrates what I'm talking about, this coming together and caring, the blending of the public and private, this informal, random mix, the blending of rabbinic family and congregational family - that nexus where a community becomes one people, brought together by mutual respect, love, laughter and common purpose. There are lots of photos of my family (including cameo appearances by the Hammerdogs, Chloe and Crosby) mixed together with other temple families.... in other words, our extended family. It's on YouTube at at: http://www.youtube.com/watch?v=n09dz0aQ3xc When the You Tube viewing screen comes up CLICK in HIGH QUALITY BUTTON on the lower right of the screen for the best quality viewing.
A heartfelt thank you to everyone who made Temple Rock happen.