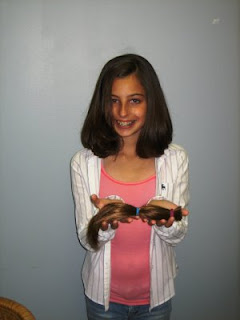 It's been a good week for hair. To kick-off her “bat mitzvah” year, Julia Fruithandler donated her hair to Pantene Beautiful Lengths. Similar to Locks of Love, Pantene Beautiful Lengths, in conjunction with the American Cancer Society, provides custom-made wigs free-of-charge to patients battling cancer. If you would like more information about the program, you can visit their website at http://www.beautifullengths.com/.
It’s a wonderful start to a very special year… (and, as her mom Suzanne noted, she looks beautiful with her new hairstyle)

Last weekend, things got quite Hairy, what with the musical "Hair" winning a Tony for best revival;, and the fact that last Shabbat's portion, Naso, refers to that biblical hippie called the Nazerite. Here we also had our annual Teen Shabbat, giving me the perfect audience before which to discuss the question of Jews and hair.

I compared a verse in the portion to a song from the Broadway show: (Numbers 6:5):


All the days of his vow of Naziriteship there shall no razor come upon his head; until the days be fulfilled, in which he consecrateth himself unto the LORD, he shall be holy, he shall let the locks of the hair of his head grow long.


My Conviction (from Hair: The Broadway Musical)

You know kids, I wish every mom and dad would make a speech to their teenagers and say kids, be free, be whatever you are, do whatever you want to do, just so long as you don't hurt anybody.
And remember kids,
I am your friend.
I would just like to say that it is my conviction
That longer hair and other flamboyant affectations
Of appearance are nothing more
Than the male's emergence from his drab camouflageInto the gaudy plumage
Which is the birthright of his sex
There is a peculiar notion that elegant plumage
And fine feathers are not proper for the male
When actually
That is the way things are
In most species

On the one hand, long hair means rebellion and on the other (the Nazerite), submission - but in each case there is a passion that goes beyond the routine, a religious fervor leading to the desire to stand out from the crowd, and a yearning for holiness - a drive to get back to the Garden. There could well have been lots of Nazerites at Woodstock. They would have felt pretty comfortable there, as long as no one passed them any wine.

You can find more about Jews and Hair in an article entitled: "Hair Apparent: A Guide to Jewish Hair." An excerpt, which makes reference to other aspects of last Shabbat's Torah and prophetic portions:

The Power of Hair: The Samson Syndrome

Our first inkling of a notion that hair might be of significance in a person’s spiritual life is in the Book of Bamidbar. Here we learn of the Law of the Nazarite; a person, male or female, who has elected to take upon themselves additional stringencies — for them, 613 is not enough! For a self-determined amount of time — at least 30 days — they must not come in contact with the dead, indulge in wine or strong drink, nor cut their hair. All the while they are a Nazarite they are kodesh, holy to God. After the fulfillment of the vow they are instructed to go to Jerusalem and offer sacrifices.

The most legendary of all Nazarites is the last judge, whose story is told in the Book of Judges. While he is in the womb, Samson’s mother is instructed by an angel to dedicate her son to God. She too must observe similar Nazarite-like restraints and, once born, Samson must be a lifelong Nazir. He will grow his hair long and abstain from strong drink and wine. The ordinance to not come in contact with the dead is waived, as it will impede on a large part of his job description. The mystery of Samson’s superhero strength is in his hair. When Delilah discovers this, she shears him of his locks and hands him over to the enemy. He dies dramatically, empowered anew with a fresh growth of hair on his head; then he collapses a Philistine arena down upon them, and himself. Why must the holy Nazarite desist from cutting his hair? Does it indicate his letting go of self-involvement? It may be that this distancing oneself from the day-to-dayneed to primp invites a holy devotion to God.

Hair Allure: The Wigs and Whys of Women’s Head Coverings

Some cover with a wig, some with a hat, some with a wig and a hat, some with a scarf, and some with nothing at all. Some love it, some resent it — but all of us have ancestresses that covered their hair. But why and from where do we have a practice of covering the hair of a married woman? Though it hangs on a mighty thin thread — or in this case carefully spliced hair — it is based on a Biblical verse describing the humiliating ordeal a suspected wife goes through. One stage of her testing procedure, the details of which may be found in Bamidbar, is “the disturbance of her head,” understood as the uncovering of her hair. Jewish legal literature concludes that if it is a humiliation for hair to be uncovered, it must be that the norm is for a married woman to cover her hair; tresses being a beauty reserved exclusively for husband. Ironically, a novel with no Jewish content makes this practice understandable. In The Girl with the Pearl Earring, the young woman, soon to be robbed of her innocence, is rendered in her own mind violated as soon as her attacker has stripped her of her headdress.

Mournful Hair: Let It All Grow

Traditional Jewish practice is quite detailed when it comes to mourning practices. Those who are of the seven intimate relatives of one who has died: mother, father, sister, brother, son, daughter, or spouse are official mourners. They are to observe shiva, seven days of mourning, and to refrain from joyous behaviors for 30 days. They are expected not to cut their hair, and for parents there are additional restraints. What is this mournful hair growing? As in the Nazarite, it indicates the letting go of self-involvement. One who mourns can barely muster the strength for normal human hygiene, so immense is their pain. The long uncut hair says, I am beyond thinking of myself — I am inconsolable.

Beards and Side Curls: The Face of Hair

This one is simple, yet emotionally charged. The Book of Vayikra enjoins upon men not to cut the corners of the head nor their face; not to use a razor to shave the face or the side curls. Though electric shavers, whose mechanics are more scissor-like than razors and therefore permitted, are used by some, others do not shave any facial hair whatsoever. Like it or not, on t-shirts, in cartoons and in lots of Jewish kitsch, the beard has been taken as emblematic of the Jewish male. This hair makes a statement.

Having been privileged to recently celebrate our grandson’s “upsherin” — first hair cut, I come somewhat predisposed to the charm of this far from universally observed custom. The growing of a young boy’s hair until he reaches the age of three is compared to the mitzvah in regard to trees, whose fruit is not harvested until the fourth year —the year of holiness. The fruit of the tree is taken to Jerusalem to be eaten there; similarly, the youngster, having begun his fourth year, is initiated into Torah study with the honey-laced Aleph-Bet. Hair is the most visible symbol of growth human beings possess. Once grown, we remain fairly stable organisms — a pound or two here and there notwithstanding. Hair indicates the unique human capability to change and to renew ourselves; it becomes a vehicle for our self-image. No nuance of our humanity is lost on our Maker; in Judaism hair matters.

Also see this "Ask the Rabbi" question from Ohr Sameach" wondering whether it's OK to use a curling iron for payis. YOU CAN'T MAKE THIS STUFF UP!

And then there's this article by a teen, written for the Jewish Week, called The Jewfro.
Posted by Joshua Hammerman