The True Face of Israel/ Crying "Wolf" in Sheep's Clothing" 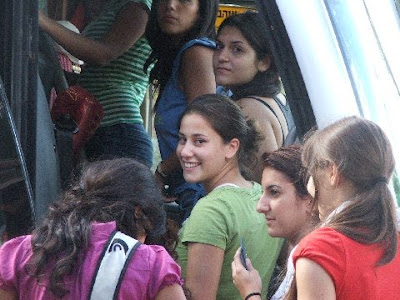 In the face of the this Goldstone report, which smacks of a medieval blood libel, we have this. I thank Beth Boyer for forwarding this photo of a cousin, Shir, an 18 year old going off to the army. This is her last photo as a civilian. Beth reports, "Shir is a brilliant dancer and sweet soul, and as I look at all these young girls going off to the army, I can only be reminded of the sacrifice Israelis make for all our security--keeping Israel safe for all Jews."

The UN report, in alluding to possible crimes against humanity, is itself a crime against humanity, because it cheapens and makes a mockery of authentic accusations of such crimes. It is cry of "wolf" in sheep's clothing. Even for those who often question Israel's tactics (as I do), this is an abomination. And coming on the very day when the IAEA has stated that Iran can now build a nuclear bomb, it is even more dangerous.

I've collected a number of editorial comments and observations (see the posting below) which you can read, along with Rosh Hashanah Messages from Obama, Netanyahu and Peres.
Posted by Joshua Hammerman