We CAN All Get Along

Yes, in a world full of divisiveness and strife, we CAN all still get along. Tablet magazine writes about just-announced multi million dollar grant to the seminaries of the major Jewish denominations - given on the condition that they work together. But, as the article points out in the photo below, we at TBE already knew that they can!


Last week, each of the three universities associated with the major American Jewish denominations received an $11 million grant from the Jim Joseph Foundation, a San Francisco-based Jewish philanthropy. The grants to the Reform movement’s Hebrew Union College, the Conservative movement’s Jewish Theological Seminary, and the Modern Orthodox movement’s Yeshiva University are earmarked for their respective Masters programs in Jewish education—a priority at all three institutions thanks to the current emphasis on youth outreach across much of the organized Jewish world.

There’s only one catch: Each institution must use $1 million of its grant money on joint teacher-training endeavors with the other two schools. (click here to read the full article) 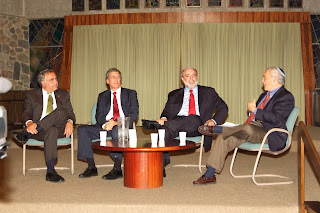