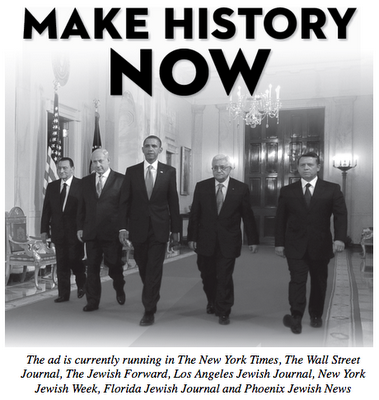 Did you see J-Street's full page ad in several newspapers today, including the New York Times? It sends a very powerful message and only ups the ante for October 7th's conversation between Alan Dershowitz and Jeremy Ben Ami, right here at TBE.

David Grossman, the great Israeli novelist, has said, regarding the current talks, "I don't have the luxury of despair." I agree with that, which is why I've endorsed other J-Street efforts.

I haven't signed on to this one, though, because the text of the ad makes an issue of settlements without mentioning the many other issues on the table right now. True, the Sept 26 deadline is fast approaching, and it seems clear that Israel's current moratorium on settlement construction will either end or be modified. But the parties know all about the deadline and it weakens Israel's hand to make mention of settlements in isolation - in an otherwise powerful and effective ad.
Click here to see the full newspaper ad.

Make no mistake, the neocons have J-Street on their radar, and one blogger is even targeting rabbis (gasp) who have supported various positions J-Street has taken. It all reeks of the same demonization that has become all too prevalent in Israel, where any group advocating human rights and dialogue has been vilified, Rabin style, as traitors (one rabbi called the New Israel Fund a "Rodent in the Mikva.")

It will be verrrry interesting to see where Ben Ami lands on Dershowitz's vilification scale (and vice versa), or whether the two will discover vast areas of agreement. I'm hoping that will be the case.

Be here on the 7th - and get here early! People are coming in from all over the country. Student groups will be coming from Yale and Brown (whose delegation will be led by my son Ethan, naturally) and who knows where else.
Posted by Joshua Hammerman

Email ThisBlogThis!Share to TwitterShare to FacebookShare to Pinterest
Labels: J-street