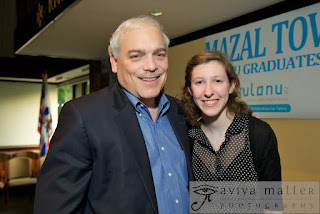 Shabbat Shalom, a Meaningful Memorial Day, and Mazal Tov to all our TBE graduates, including Sophie Koester (above), who graduated from Kulanu this week.  Thank you to Aviva Maller for the photo.

Following the devastating tornados of this past week, our federation has set up an Oklahoma relief fund.

See our photo album from last week's K'tanim and Hebrew School moving up ceremonies.  Please send me additional photos and video to include in that album. Also see prior albums for the  7thgrade class wedding, Temple Rock Cafe and our Passover programs and Interfaith Seder.  And don't forget Ronnie Brockman's blog, to see what kids can learn from "The Very Hungry Caterpillar" (just in time for the every-17th-year invasion of millions of very hungry cicadas).

TBE in the News

TBE’ers have been in the news this week.  See this moving interview on CNN featuring Jill (Rothkopf) Steinberg and others, describing their experiences in light of Angelina Jolie’s decision to undergo a double mastectomy in light of her genetic predisposition for breast cancer.  And Rabbinic Pastor David Daniel Klipper was the subject of a Wall Street Journal feature on midlife career changes from the world of finance to more spiritual pursuits.

Yesterday's decision by the Boy Scouts  to lift the ban on gay youth highlights the dramatic journey American society has taken on this issue.  While the decision does not go far enough (there is still still discrimination in hiring gay adult leaders), the "evolution" in attitudes is still remarkable.  In 2001 I addressed this issue in a column entitled "On Scouting and Outing," a piece that highlights my own evolution, and the Conservative Movement's, on this issue.  But I proudly stand behind most of what I wrote then, while maintaining pride in the many positive effects scouting has had on American life, including the lives of some children here at TBE.

Admittedly, the question of sexual orientation and religious values is not a simple matter.  My congregation is at odds with many in my movement in that we do not discriminate based on sexual orientation in our hiring policies or in selecting board members. I also advocate the ordination of gay and lesbian rabbis, although I can understand the concerns of those who do not.

The issue here for me, however, is not whether the Torah is endorsing a particular sexual orientation; it is a question of simple discrimination. Yes, there are times when boundaries must be drawn -- the Pope should not be accepted to rabbinical school, for example, without first converting, nor should I be admitted to the College of Cardinals. But this is not one of those times. Jews, of all people, understand the pain of prejudice, and the combined afflictions of AIDS and violent gay-bashing are wake-up calls that all of us must hear. Further, while I do not subscribe to the notion that everything stemming from the religious right is evil, this is a case where Christian fundamentalists are trying to impose their own perception of God's will on the boy scouts and on the rest of us. Therefore, I support the resolution issued in January by the leadership of the Reform movement, calling upon local scouting chapters to publicly amend their charters to affirm non-discrimination.

I have no illusions here that even a mighty cry of Jewish protest will change this policy. It won't. Scouting, like the American flag -- and like God, for that matter -- should belong to all of us, not merely the religious right. But the B.S.A. is right now a captive of Ashcroftism, and we aren't going to change that. Nonetheless, like the lone prophet outside of Sodom, we protest not so much to change the policy as to ensure that this policy doesn't change us.

In the end, the world has come to realize that what was once thought to be a moral choice and a mere lifestyle selection is, quite simply, not that.  When the light bulb went on and people realized that, one of the most contentious issues of the day dissolved into thin air.  There are still dangers out there - hatred and narrow mindedness beyond belief (as evidenced last week in the East Village), but barriers are falling everywhere, in Rhode Island and Minnesota most recently, and even the N.B.A.

Now that the B.S.A has righted one wrong, we can go about the very hard work, all together, of teaching our boys and girls to make the right moral choices, including the choice not to bully other kids and the choice to dedicate their lives to repairing the world.

This week’s portion of Beha’alotecha chronicles the Israelites’ adventures in the Wilderness, with the running theme that carries us through the rest of the book, and indeed throughout the rest of Jewish history to this day:  “They came, the kvetched, they conquered,”  or as Julius Caesar famously put it in Latin, “Veni, Vidi, Kvetchi.”  For every step forward, and there were many, there were two kvetches backward.  Most of the kvetches have to do with nostalgia, longing for those bygone days in the shackles of Egyptian slavery.

But nostalgia is not the only culprit at play here.  There is also envy.  In describing the manna, the Torah makes it seem like the tastiest thing this side of Entenmann’s crumb doughnuts -  the glazed ones.  Yet even that was not good enough for the Israelites. Rabbi Jonathan Eybeschutz, a 17th century sage from Krakow, noted that the Torah is trying to make a statement about human nature here. People will not be satisfied even with a daily dozen of Entenmann’s crumb doughnuts, if their neighbors are enjoying the same thing.  In order for people to feel fulfilled, they have to have more than their neighbors.  It’s sort of the opposite of Dayenu.  It’s never enough, unless I have more than the guy next door.

This lesson came to mind this week as I plunged into the zeitgeist by seeing the current 3-D version of “The Great Gatsby” and then heading to Broadway to see the revival of the musical “Pippin” One main character shouts "I want things! Lots of things!” while the other wants to be extra-ordinary and to find his corner of the sky.   Both productions are dazzling 21st century remakes, pumped-up-on-steroid versions of the originals.   It’s disturbing that current films and musicals need to be so over-the-top in order to hold our attention.  Subtlety is SO 20th century.

But the main message remains for both “Gatsby” and Pippin,” and it is the same one that the Torah is teaching us.  The so-called American dream is not that different from the Jewish dream, and it’s not about having more, being better or reinventing oneself from scratch.  Those dreams are doomed to go up in flames (and Pippin’s pyrotechnic finale takes on a whole new meaning in an era of suicide bombings) or to be beaten back by relentless tides of disappointment.   The only enduring dream is one where people come together in communities that care about one another, where individuals are satisfied with what they have.  The Judaic dream discovers the extraordinary within the ordinary, so that the ordinary becomes extraordinary.  God is found in the everyday encounters that comprise community, in patching the roof and pitching the hay.  Sanctity is discovered in the everyday acts of eating and working and loving.  Salvation is attained through simplicity – and commitment.  It’s found in the act of reciting 100 blessings daily.

Ecclesiastes 5 puts materialism in it’s proper place: we should enjoy what we have earned and treat it as a gift.  There is little else that matters, as Sarah McLachlan reminds us:

I’ll be counting my blessings this weekend as I attend Ethan’s college graduation.  For those of you  who remember....

we’ve all counted our blessings together while watching our families grow together.

On this Memorial Day, what better time to reflect on the many things that endure and the many gifts we share.  Let’s do that, without complaint or envy.