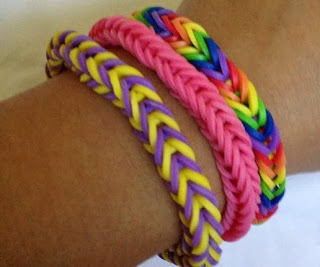 Rainbow Looms are the latest mega-fad among American kids, in particular middle schoolers.  A direct line can be drawn from prior wrist-borne fads, like Silly Bandz (and their Jewish equivalent, Meshugabands) and, going way back, the Slap Bracelets of the ’90s.  On a broader level, they continue a tradition of fad-dom tracing back to the hula-hoop and the pet rock.  But unlike the prior fads, in this case the kids not only wear them, they make them, and they give them away to friends and sell them for charity.  A more wholesome fad can not be found.
Get The Times of Israel's Daily Edition by email
and never miss our top stories   FREE SIGN UP!
Strangely, these wholesome projects have spurred controversy, despite the fact that they miraculously divert kids from video games and their incessant texting.   The bracelets have been banned from some NYC schools, apparently because they have generated playground antics and have distracted some kids from their studies.
I believe that Rainbow Looms are 100 percent Kosher, even though some rabbinical authorities have cautioned against them.  The craze has hit Orthodox yeshivot in the Five Towns, where rabbis are cautioning parents not to allow their children to weave them on Shabbat.  There do appear some clear violations of Sabbath laws involved in this process (weaving itself is an explicit one), but the authorities there go too far in stating that decorative bracelets should be banned for boys because they are “simlat isha,” women’s clothing, tantamount to wearing a dress.  I’m sorry, but I wear a rainbow loom bracelet and no one has ever confused it with a dress.  A colorful pantsuit perhaps, but a dress?
This kind of kill-joy attitude among educators has happened before, with both Slap Bracelets and Silly Bandz.  Educators seem to have an unlimited capacity to shoot themselves in the foot.  The question rabbis ask should not be whether they are kosher, but how can these accessories make Judaism look cool?  Any fad will do, in that regard, as long as it doesn’t involve permanent bodily mutilation.
Where some see a threat, I see an opportunity. Here’s yet another chance to reach middle schoolers where they’re at — and anyone who deals nonstop with bar mitzvah students craves a chance to hitch our wagon to the latest fad. Under my tutelage, students have written memorable bar mitzvah speeches about teeny bopper vampires, Mr. Spock’s Vulcan Greeting, Krusty the Clown’s bar mitzvah and all things Pokémon.
As fads go Rainbow Looms are a natural for Jewish educators.  For one thing, they inspire acts of tzedakkah.  We have several b’nai mitzvah students who are making and selling these bracelets, then donating the proceeds to various charities.
Hey, we practically invented the rainbow, or at least the Torah did a good job of co opting its symbolism (kudos to its Author, who clearly had an instinct for Jewish education).  The rainbow appears throughout our ancient sources, beginning with the Noah story, where it is a symbol of God’s faithfulness to the covenant and concern for the future of the earth and humankind.  There is a blessing for when we see a rainbow: (Berachot 59a) “Blessed art You, Adonai our God, Sovereign of the universe, who remembers the covenant, is faithful to it and keeps Her word.” In Kabbalah, the rainbow’s colors represent the various shades of God’s emanations (the Sefirot).
As for the loom, Rabbi Akiva compared God to a weaver of a garment, and midrash has it that God wove clothing for Adam and Eve.    The  interwoven strands of these bracelets make them look like a havdalah candle for the wrist, which reminds us of the multi-cultural threads of Jewish identity.
I see no harm and considerable good in this new fad.  As with the prior ones, we should ride it until it runs its course – which should happen about a week after Hanukkah.
Posted by Joshua Hammerman