There are lots of heroes in Jewish traditional sources and most of them are men.  But have you ever noticed that our holidays do a good job of maximizing the acclaim given women?  Purim would not be Purim without Esther.  Hanukkah has Judith and Passover has Miriam.  And even long before Betty Friedan changed history into her-story, Shavuot had Ruth.  Without Ruth's classic kindness, there would never have been King David - literally, as he was her great grandson. How sad it would have been for all of us if Ruth's voice had been stilled.

Jewish tradition has no inherent problem with women. The problem isn't Judaism - it's Jews.  The problem is the slippery slope that comes from the incremental discrimination against women, a discrimination that originated in patriarchal and misogynistic societies and gained momentum over time - and especially recently.

As a committed pluralist, I need to accept that for some Jews - and some iterations of Judaism - halachic justifications for the differentiation between male and female sex roles are internally consistent with an accepted worldview that existed in previous eras, long before feminism.  They were right, perhaps, for their time.  Those practices, which minimized women's roles in public religious life, also reflected a general reverence for ancient practices.

But I also know that discrimination against women, like all discrimination, is a slippery slope, one that leads to objectification and has, in many cultures, led to a culture that condones violence. So, while refusing to succumb to the temptation to condemn past practices, we need to go out of our way to reverse the disturbing trends.  But in some parts of the Jewish world, the exact opposite is happening.

Over the centuries, in Judaism, the silencing of women's voices has taken a strikingly literal turn. Click here for a halalchic study, from an Orthodox journal, of the evolution of the controversial concept of Kol Isha, a concept designed to limit where women's voices can be heard.  Then click here for a comprehensive study of the topic by a Conservative scholar.  That responsum concludes:

...There is no general prohibition against women singing in classic Jewish law based on the Talmud and subsequent codes and commentaries until the early nineteenth century. The current blanket prohibition accepted by Haredi and some modern Orthodox rabbis was first suggested and rejected by Rabbi Joshua Falk (d. 1614) and was only given as a halachic ruling by Rabbi Moshe Sofer, the Hatam Sofer, in the early nineteenth century.... There is therefore no halachic justification for anyone walking out when women sing. But even if one accepts the very strict ruling of the Hatam Sofer, it is forbidden to walk out in order not to insult the female performers.

So we can see the slippery slope in action and how the notion of Kol Isha took on a life of its own relatively recently.  The 19th century is only yesterday by Jewish historic standards.

Well, this week, the slope got even slipperier.  Now, not only are women no longer to be heard in public Jewish life, evidently they also cannot be seen.  Not just covered up - but airbrushed out completely.

See below a photo of Israel's new government, sworn in this week.  The lack of women in senior positions is just one of the many major concerns that one could have about this government.  But at least there are some women. 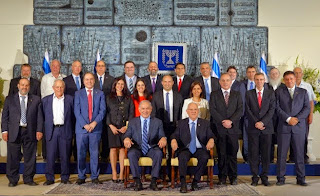 Or are there? See this front page from a Haredi newspaper.  The women have been airbrushed out! 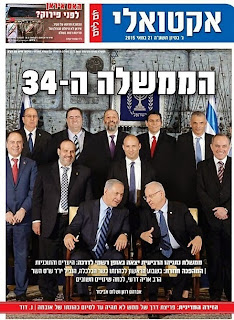 Israelis are a creative lot, so that affront gave rise to some rather hilarious memes. 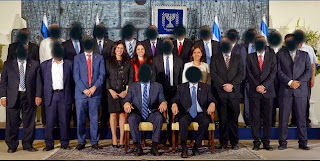 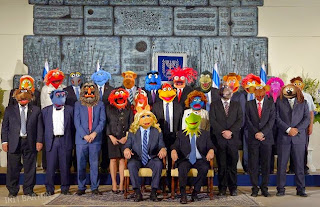 But the humor masks a real problem.  For if a society tolerates the silencing of an entire segment of the population - and now the rendering of them as invisible - where does that slippery slope lead?  What outrageous behaviors will happen next, and against whom, and how will they be justified?

We need to return Judaism to its roots, literally, to Root, which is the Hebrew for Ruth. Ruth could easily have disappeared into the dustbin of Moabite history.  But she insisted on being heard, being seen and remaining aside her mother in law Naomi, to whom she said, famously "Whither thou goest, I will go; and where thou lodgest, I will lodge; thy people shall be my people, and thy God my God."

Soon, if this slippery slope is not reversed, who knows, maybe someone will try to airbrush Ruth right out of the Bible.