The Shabbat Announcements are sponsored by Jill and Alejandro Knopoff in honor of their daughter, Morgana, becoming a Bat Mitzvah. 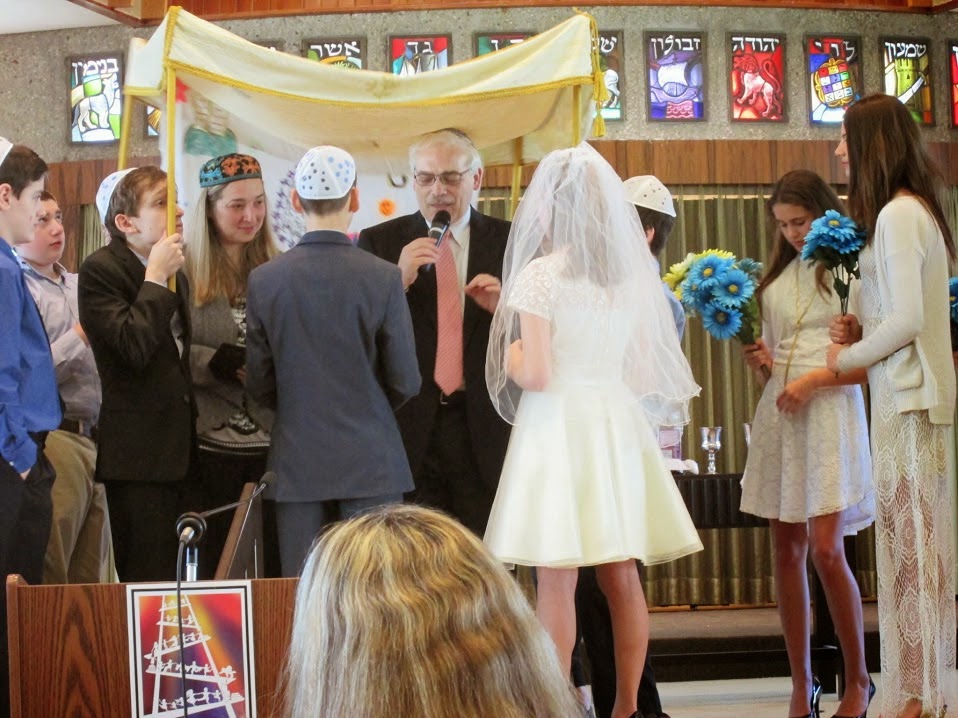 As many of you know, next weekend my family will be traveling to Washington for Dan’s college graduation (there will be no Shabbat-O-Gram next week).  While everyone has been thrilled for Dan, as they should be, (and if you know anyone in the think-tank world, Dan’s specialty is international relations, with a focus on the Middle East), the instant reaction I’ve gotten from most people is a mazal tov to me on having paid the final college tuition bill.

Since, as we all know, every event of a child’s life is all about the parent, I’ve given some thought to this sacred moment in the life of a family, the graduation of the youngest child.  As of a week from Monday, for the first time since Ethan skipped off to nursery school precisely twenty years ago at the age of two, not a single Hammerman will be matriculated at any school.   Now I have heard of this animal known as graduate school, so we may not be completely out of the woods yet.  But still, this is a real watershed moment for all of us.  And since I’ve chronicled and assessed prior rites of passage for Dan, including his bris and bar mitzvah, why stop now?

So what would be an appropriate blessing with which to mark the college graduation of a youngest child?  Should we break a plate, a custom sometimes done by parents at weddings or engagement ceremonies?  Maybe burning a mortgage would be more appropriate.

Here’s a prayer I found on Beliefnet, written by a minister.  I like it a lot and it needed to make very few edits for it to be appropriate for Jewish families. It points out the anxiety all parents feel - or should feel - at a time like this, especially notorious helicopter parents like me.

“God, another rite of passage has come and gone. The child you have given has taken another step into the world. I am thankful, proud, delighted, relieved, and yet more than a little apprehensive. It’s a familiar mix of emotions, one I’ve known all the years I’ve shared this precious child with you. Today, I know you share many of these feelings, for you are a parent of great passion and joy. You share all perhaps except the apprehension. You never fear, because you are love, and perfect love drives out fear. You are a parent who knows no fear! I need that today. I need some of your parental boldness. As my child walks out now into a new season of responsibilities and challenges, in a world of struggle, I once again choose to release him/her to you. I have had to do this many times already: the first day of kindergarten, when the driver’s license came in the mail, on that first date, at high school graduation, when we drove off that first day of college, and now, when that journey is completed and they step out into the world as we know it, full of tough, dog-eat-dog battles. All we can do it pray for your hand, which reaches to protect when ours cannot. I say in faith, ‘God, bless and keep him, make your face shine upon him and be gracious to her, and look on her with favor and grant her peace.’”


Or maybe we should simply repeat the traditional blessing done by parents at a bar mitzvah:  “Praised is God, who has relieved me of guilt for whatever becomes of this child.”

Historians trace this Baruch Shep’tarani blessing back to the biblical story of Jacob and Esau, brothers whose post-adolescent lives took dramatically different tracks. Although Rebecca and Isaac were hardly exemplary parents, the blessing validates their unavoidable helplessness in opposing Esau’s wayward ways. In instituting this prayer, the rabbis were implying that there comes a point where parents simply have to let go.

My two kids’ lives have also taken very different tracks, though, since of course it’s always about us parents, they’ve pursued some of their parents’ passions in different ways.  I can see a little of me in each of them - but both of my boys are far greater than the sum of their ancestral parts.

Most of all, they have turned out to be menschen, who love and support each other and really care about others.  No parent could ask for more and Mara and I are very proud of both of them.

And since their entire childhood took place within our little village, an extreme rarity for P.K.s, especially rabbinic ones, but an advantage that this P.K. also was lucky enough to have as a child, we’ve got to share the credit with all of you.

Which means we get to share the nachas as well (for an interesting discussion of what “nachas” means for the contemporary Jew, click here).  So, Mazal Tov to everyone on Dan’s graduation - and think of us at Sisterhood Shabbat next weekend.

And while you are at it, let me know if you would like to see Dan’s resume...

Tattoo or Not Tattoo: That is the Question

On Shabbat morning, we’ll be discussing a topic that I occasionally bring up when we reach this portion of Ahare Mot-Kedoshim and there are teens in the room:  tattoos.  You can find the relevant verse in Leviticus 19:28

The topic has been trending this week with the news that the new Apple watch has trouble functioning correctly for those with tattoos (thankfully, my tefillin work just fine).

Perhaps more relevant to the topic from the Jewish perspective is this article from Ha'aretz from a few years ago.  The article details a moving account of how the adult child of a survivor wanted to keep the legacy of his father alive by walking into a Tel Aviv tattoo parlor and asking to have an exact copy of his father’s Auschwitz number branded on his own arm. Since not we are reading Kedoshim, right on the heels of Yom Hashoah, tomorrow’s discussion is a “natural.”

And it’s a discussion I often have with teens, especially in light of the growing popularity of body art.  A survey released one year ago indicated that 40% of Americans said that someone in their household has a tattoo, doubling the result of a similar survey in 1999.

Why are permanent, indelible tattoos considered so “unkosher?” (Yes, I know that tattoos can be reversed, but it’s a painful, difficult and imperfect process).

A good, quick response can be found on Hillel’s website. Essentially there are three reasons that have been posited through the centuries: 1) that tattooing was originally a form of pagan worship; 2) that the human body is a holy vessel, a creation “in God’s image,” and who are we to desecrate a gift from God? The mutilation of the body isn’t entirely prohibited, though. Earrings are permitted, for instance, and anything that enhances or saves life, such as autopsies, organ donation and, yes, even some plastic surgery. If the Elephant Man came into my office and said he wanted “a different look,” I don’t think I’d chase him out as a vain narcissist. While he could have technically lived without it, his self image may be so low that in fact, such surgical enhancement could in fact keep him from taking his own life.

I must add, however, that the worship of the body should have its limits - and if such physical enhancement also causes a serious risk to health (e.g. tanning salons or breast implants), we’ve got to wonder if it isn’t just another form of pagan worship. Some have made the claim that circumcision is mutilation, but the prevailing Jewish view is that it is a finishing touch to the miracle of birth, symbolizing a partnership between parents and God. And in fact, in Greek times it was the painful operation to reverse circumcision that was considered the most reprehensible form of body mutilation, since it was done in order to assimilate into Hellenistic society, which was so focused on the exposed - and exalted - human body.

So it’s a complex subject, but the third rationale, he most recent. is the most relevant here. One reason I advise teens to avoid the temptation of tattooing is precisely because the Nazis did it to us. (It’s similar to the argument that I make against cremation). The Nazis did it to dehumanize human beings, to brand them as they would brand cattle, to take away their individuality and freedom of choice. Some claim that in the current context, tattoos are freely chosen and are a means of expressing that very freedom and individuality. But the very indelibility of a tattoo demonstrates the opposite. If it cannot be reversed, we forfeit the choice to not have it! And if the only permanent choice we should be making is to devote our lives to God, rather than a lesser object of devotion (read: idolatry), then that explains why circumcision can be the only indelible bodily change that is granted blanket approval.

But what of this survivor’s son, who wishes only to preserve the memory of the evil - itself a mitzvah (“zachor”) - rather than to perpetuate that evil form of dehumanization.  Is this a fitting tribute to a generation that will soon be gone? Or is it a clumsy distortion, a visual aid that may succeed in shocking people but can’t come close to duplicating the real thing?

I tend to think the latter. There are many avenues of remembrance out there. Why choose to imitate the evil rather than stamp it out? The son’s desire is well intentioned, but if it didn’t even bring comfort to the father (who lived his whole life hoping his children would never have to live in such shame), how is this act not more than an example of the very self flagellation and mutilation that the Torah prohibits.

The Torah implores us to choose life. When we leave a cemetery, we wash our hands. Why, as we leave the smokestacks of Auschwitz behind us, should mark our hands so that the stain will never come out? Auschwitz will never fade from history. It is seared into our consciousness. The pain will never completely go away. But that doesn’t mean that we have to wear it on - or inside - our sleeves.

Shabbat Shalom X2 for this week and next!