The Shabbat-O-Gram is sponsored by Karen and Jose Singer-Freeman in honor of their daughter, Elena's becoming a Bat Mitzvah.  Mazal tov!!! 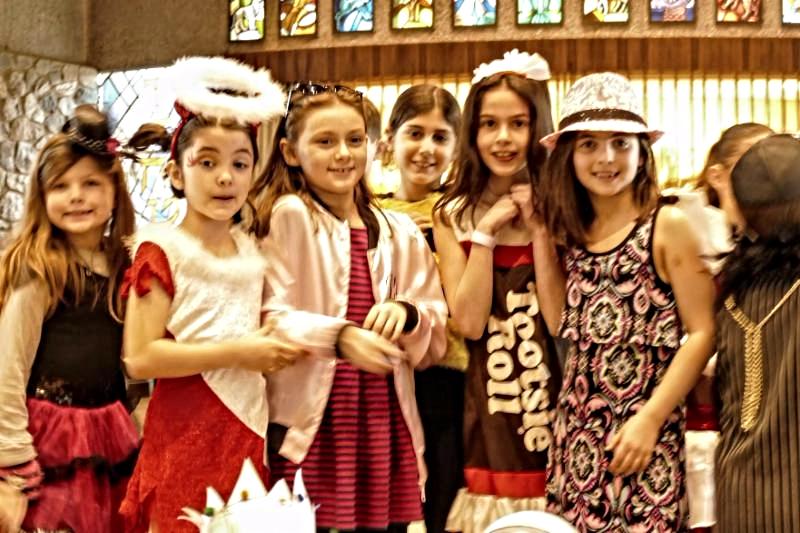 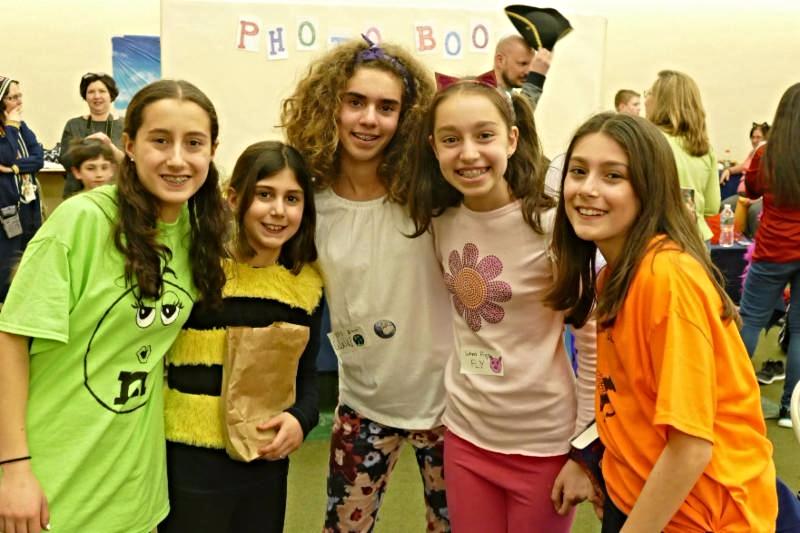 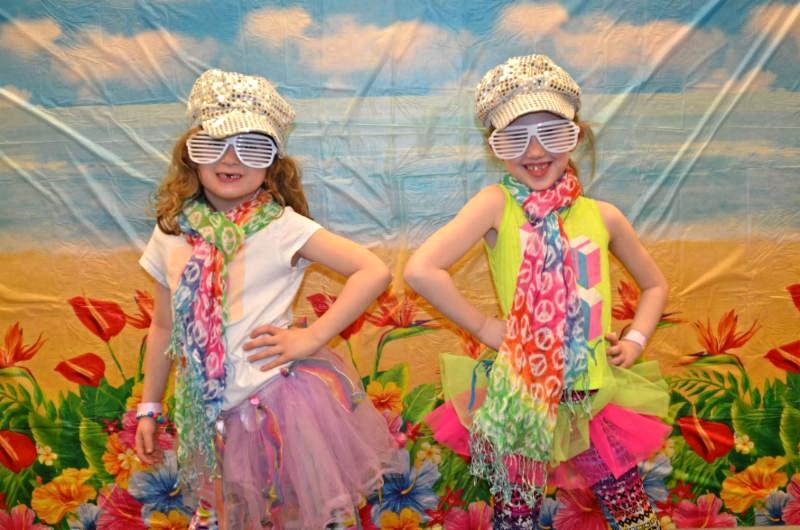 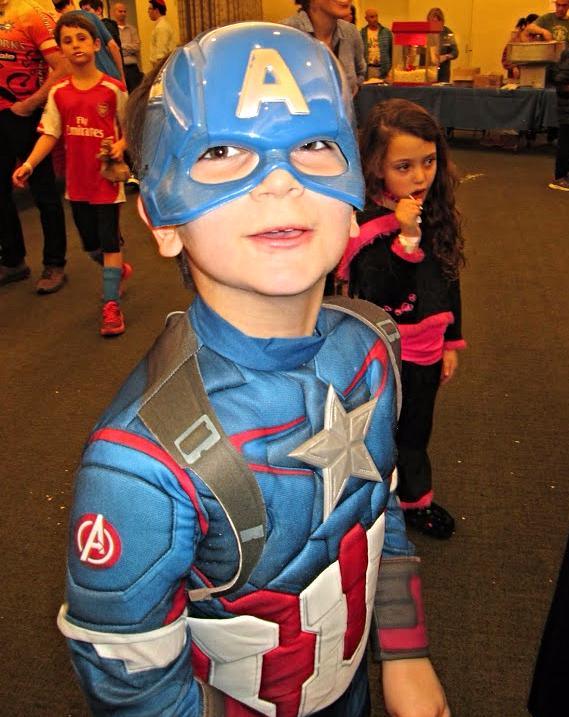 We had a merry old time on Purim night, for kids and adults!  See our Purim photo album!
Special thanks to Cantor Fishman, Lisa Udi, Steve Lander and all our adult and teen volunteers.

We pray for the victims
in Brussels, Istanbul and the Ivory Coast, following this week's terror attacks. 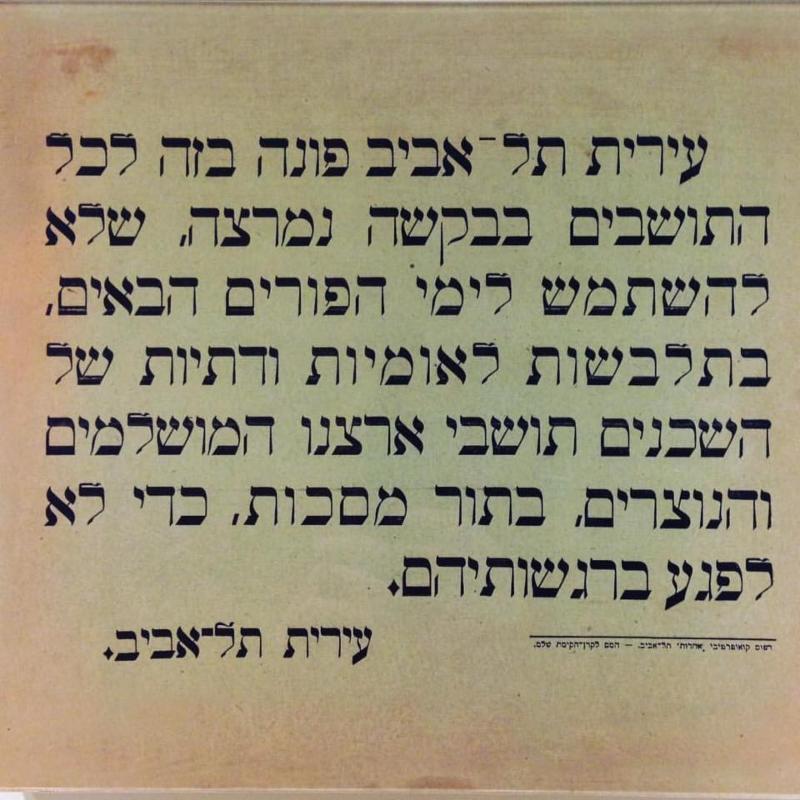 From a kinder and gentler era:  A 1930 poster from the municipality of Tel Aviv, asking Jewish residents not to wear Purim costumes copying the dress of the Muslim or Christian residents out of respect for their feelings.  Some would call that P.C.  So would I, as in "Pretty Civilized!"

Along those lines, next Thursday our interfaith community will join in a statewide effort known as "Honest Conversations with our Muslim Neighbors."
See the flyer. Area Muslims will share stories and address issues such as
- Communicating moderate Islam in the face of extremism;
- Why some girls and women wear Muslim dress, and others do not;
- What core beliefs in Qur'an are shared with other world religions;
- Cultural differences among Muslims from diverse parts of the world

People who have been asking me about these matters now have a chance to hear from those far more conversant in Islam than I am.  Hopefully this will be the beginning of a much more substantial conversation.

Praying for Peace in Jerusalem

In Jerusalem today it is both Good Friday and Shushan Purim (Purim is celebrated one day later in walled cities like the ancient Persian capital of Shushan).  I've discussed what the two holidays share, a fervent hope wins.  In Jerusalem today, that hope for peace endures, even as it appears to hang by the thinnest of threads.  Click on the video below to see that hope made manifest in the prayer "Oseh Shalom," as sung recently by the group Nava Tehila at the Old Train Station in Jerusalem, which has been reconstituted as a new mecca for eating, shopping  and gathering.  You've GOT to see this just-released video!

On Shabbat morning we will celebrate the Bat Mitzvah of Elena Singer-Freeman. Mazal tov to Elena and her family! Our theme this Shabbat, which ties into the portion of Tzav, is "Being thankful." Click here for the parsha packet.  And for a terrific preview of the topic, click on the superb educational video below, from the highly acclaimed Jewish Food for Thought series.  Watch the video, then download the study guide.

With Purim behind us (unless you are in a walled city), now is the time to download the Rabbinical Assembly Passover Guide for all your Passover hows, whys, whats, do's and don'ts.  Also, if you are confused about the question of legumes (kitniyot), eaten by Sephardic Jews but traditionally not in Ashkenazi homes, the Rabbinical Assembly has recently ruled on this topic - see the whole responsum here.  We will be discussing it at a future service as the festival approaches.

ADL Presents "Escape From a Family of Hate"

"Escape From a Family Of Hate" -Conversion via Social Media, with Grace and Megan Phelps  (at Temple Sholom in Greenwich, on Tuesday at 7 PM) is a rare behind-the-scenes look at two young women's journey from being on the front lines of the Westboro Baptist Church's hate-filled protests against Jews, the LGBT community, members of the military and others, to becoming allies against hate.


They will explain why they felt compelled to leave their church and their family and how they are now acting as allies in the fight against hate. Fresh off a profile in the New Yorker, the sisters are currently working on a book that will be turned into a major motion picture.  Click here for tickets.

Mazal tov to TBE's Leon Shapiro on the publication of his new book, "The Power of Peers: How the Company You Keep Drives Leadership, Growth and Success."  The book features stories of business leaders from a range of industries to explain how peer advisory groups can be beneficial to CEOs who suffer from a "lonely at the top" mentality. By harnessing the power of peers, CEOs and senior leaders of small to midsize organizations come together to gain fresh perspectives, solve problems, focus on opportunities and possibilities, and make decisions that accelerate the growth of their businesses

Back in my lithe teenage years, I used to Israeli dance with the best of them - that is, whenever I wasn’t nursing a sprained ankle caused by my congenital flat-footedness.

OK, I admit it; while I thought I was pretty good, I reminded people less of Rudolph Nureyev than those dancing hippopotami in “Fantasia.”  In fact, it was my stirring rendition of a gushing water sprinkler in Hora Mamtera that convinced the Israeli government to go all-in for drip irrigation.  But I loved Israeli dance nonetheless.

One of my favorite moves was the Yemenite step, brought to Israel by those immigrants of the fabled Operation Magic Carpet, which in 1949 brought 45,000 of 46,000 Yemenite Jews to a place that they had only dared to dream about before, a Jewish homeland in the Land of Israel.  Whenever I heard the dance leader shout, “Yemenite left,” I know it was time to shuffle my feet leftward in three short, zigzagging steps, preferably with my head bobbing and a no-care-in-the-world Sallah Shabbati smile. I loved that step because it reinforced the exotic diversity of my Jewish family - even as it may also have reinforced dangerous stereotypes, much as the shuffling dances of African Americans were used to reinforce negative stereotypes in the U.S.

This week, while the world was preoccupied with terrorism and all things Trump, the last of Yemen’s Jews arrived in Israel and my Jewish family became a little less exotic and a little less diverse.   According to the Jewish Agency, 200 Yemenite Jews have made aliyah since civil war begin to ravage their country, resulting in an increase in antisemitism. And in a covert operation run by the Jewish Agency with State Department assistance, the last 17 arrived in Israel just before Purim.  “Yemenite left,” indeed.  Only about 50 Jews have chosen to remain behind.

The Yemenite step was choreographed to be danced quickly on hot stones, a perfect metaphor for Jews and the Diaspora.  While Hindus, who have never faced exile from their homeland, have mastered the art of walking serenely on a bed of scalding coals, Jews, who have continent-hopped for millennia, recoil erratically in our dance steps, like Woody Allen eluding a lobster or Natan Sharansky zigzagging to freedom across the bridge.  Wherever we’ve been, we’ve developed new moves, new survival strategies to help us sidestep disaster.

Theodore Herzl saw the inherent flaws of the exilic two-step and Jews have been dancing their way back home to Israel ever since.  But now, one wonders, if all that’s left of Yemen’s Jews is just a caricature of what once was, that shaky dance step and the carefree head bob, what have we lost?

The earth faces a biodiversity crisis of unprecedented proportions, with climate change threatening one quarter or more of all land species with extinction by 2100.  Diaspora Jewish communities are also facing a rapid rate of extinction. Jewish communities across the globe are rapidly vanishing, from Ethiopia to India, from South America to parts of the American South.  Now, given the upsurge of terrorism and antisemitism, European aliyah is sure to intensify and more Jewish communities will subsequently vanish.  This is not a phenomenon to be cheered.

Doubtless there are demographic advantages for Israel to be absorbing more Jews, though no one should consider aliyah to be a panacea that can preserve Israel as a Jewish democracy.  Remember when a million Jews from the former Soviet Union were supposed to ensure demographic domination?   Didn’t happen.

Last year in Paris, Prime Minister Netanyahu’s Bark de Triumph that French Jewry should abandon their patrie and make aliyah en masse was as mistaken as it was ill-timed.  The tradeoff - a majestic, ages-old Diaspora community ends... and real estate costs in Netanya soar - is not worth it.  Israel could always use more Jews, but what the Jewish world needs is more Jewrys: more diversity, more richness, more cultural connections, more interaction with other cultures and yes, more assimilation, not less.

We need to develop more Yemenite steps to navigate the scalding stone paths of an increasingly dangerous and integrated world, so that we can teach others how to stay in step with us: how to remain hopeful amidst the hurt, how to love among the haters and how to smile, sway and keep head-bobbing no matter what.
And for that, we need a thriving Diaspora.

The Diaspora Museum in Tel Aviv has recently been redefining its mission.  Previously, the indelible message of the permanent exhibit was that the Diaspora was a failed though once glorious enterprise and that Jewish identity could survive only on Israeli soil.  According to the museum’s website, the new core exhibit, set to open in 2018, “will celebrate the multiculturalism of Jewish diversity and adopt an inclusive, pluralistic approach,” with the goal of telling “the ongoing and extraordinary story of the Jewish people.”  The key word there is “ongoing.”

For that to happen, the Diaspora can’t become a dinosaur.  This week, a Jewish community that has existed since Solomon met Sheba, is no more.  Though we are happy that our Yemenite brothers and sisters were rescued and are safe, there should be little joy at this turn of events.

Rather than celebrating the end of Jewish Yemen, we should be looking for ways to strengthen other Jewish communities, in France, in Belgium and beyond.

In the long awaited blockbuster "Batman vs. Superman," released this week, critics are saying that it's Wonder Woman, played by the Israeli actress Gal Gadot, who steals the show.  Read about her here,

Reservations are coming in for our April 5 "Sharing Passover" program. All are welcome, but we especially are looking for interfaith couples, as well as parents of interfaith couples.  Along with Scott and Rae-ann Allen, we will be assisted by two representatives of the younger generation, Ariel (Schindler) and Antony Wilshaw.  Please extend an invitation to interfaith couples you know to join us on April 5!