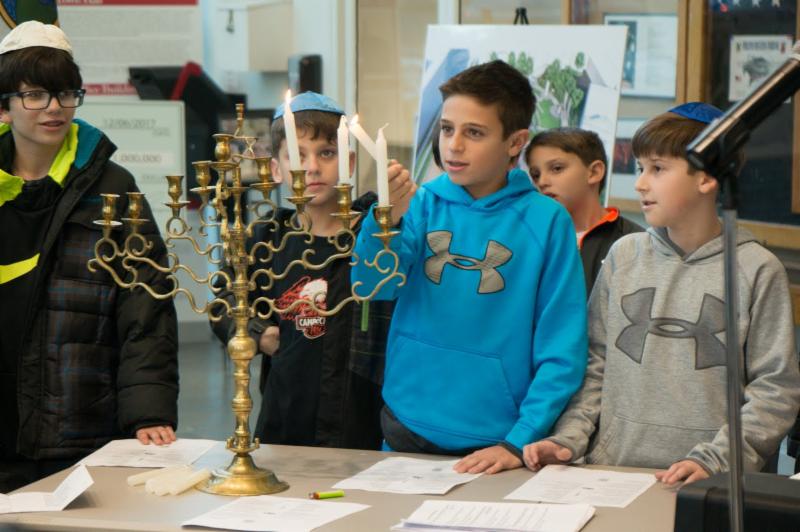 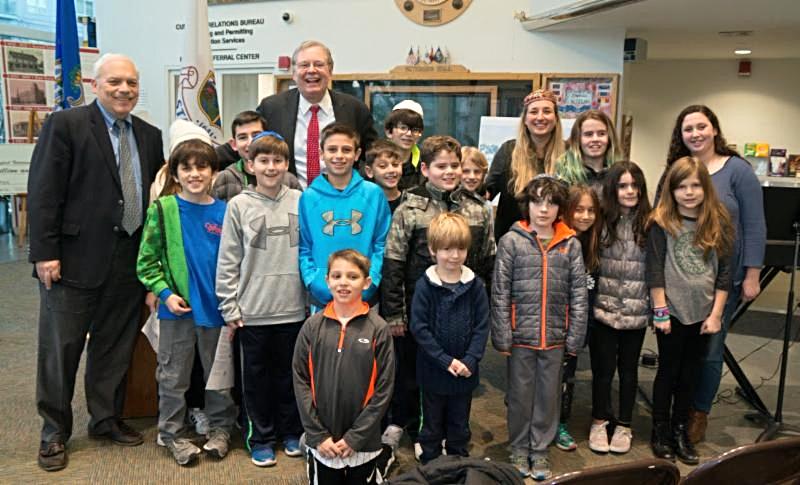 Shabbat Shalom and Happy Hanukkah
Join us on Friday night for our Disney-themed service (maybe now we should also include 21st Century Fox movies in this...).  Note the special service start time of 7 PM.  The services will be fun and fascinating for all ages, with several prayers incorporating themes and melodies from Disney films.  Between Cantor Fishman's tunes and the commentary added by our students and Lisa Gittelman Udi, this will be a really special evening.  You will learn what Jewish values can be found in "Pocahontas," "Aladdin," "Lion King," "Pinocchio," "Mary Poppins," and more.
On Shabbat morning, we'll take a close look at the history of Hanukkah gelt.
Next week, I'll be headed for Jerusalem for the Bar Mitzvah of Andrew Jaffe-Berkowitz. Mazal tov to Andrew and his family!  So this will be the last Shabbat-O-Gram for a while, but hopefully I'll have a chance to send a dispatch or two from Israel.

The Jerusalem Decision
People have been asking for my take on President Trump's decision to recognize Jerusalem as the capital of Israel.  Given that the decision was announced while I was in the midst of preparing for three funerals on consecutive days, I decided to let the matter percolate before responding.  I also had the chance to discuss it with our Israel@70 classes; this week's topic, the 1947 UN Partition, was particularly relevant to the conversation.
So now, here's my six-word take on last week's announcement:
Right decision. Questionable timing.  Wrong decider.
Now, I'll fill in the details:
Right Decision
The 1947 partition plan, which Israel not only accepted, but incorporated into its Declaration of Independence, gave international legitimacy to a Jewish state - along with and Arab state - while designating Jerusalem as an international city.  You can see from this map that no distinction was drawn between what is now "west Jerusalem" and "east Jerusalem."  The whole city was to be internationalized.

Therefore, it was understandable that, when Israel declared its independence half a year later, in May of 1948, that no country, including the US, would have recognized Jerusalem as the capital.  It wasn't yet part of Israel.  David Ben Gurion certainly wanted it to be, and the subsequent war of Independence enabled Israel to acquire the corridor from the coast to Jerusalem along with the western part of the city.
Later on, things got much more complicated, and once it was clear that Jerusalem would be Israel's capital, America had a number of opportunities to recognize it as Israel's capital while still maintaining "honest broker" status in peace negotiations.  The 1947 partition plan, while still important and irrevocable, was never accepted by the Arab states, and the internationalization of Jerusalem was never a serious subject of negotiation, either before or after 1967.
Bret Stephens detailed some excellent reasons why the decision to recognize Jerusalem as Israel's capital is a sound one in his op-ed last weekend.  I have no argument with his points.  Jerusalem is Israel's capital.  Every world leader has gone there.  Sadat visited the Knesset.  Popes and presidents have visited government offices there.  As columnist Shmuel Rosner put it last week,  "Jerusalem is Israel's Capital? Duh."
But the timing is questionable.
I wish the US had done this years ago, as part of one of the many diplomatic initiatives the US has promoted over the years.  This announcement could have served well as both a carrot and a stick to the two sides.  When the US sold AWACS to the Saudis, this carrot would have been most welcome, and given the imbalance of that deal, the Saudis would have had a hard time complaining.  During the bus bombings of the early 2000s, this carrot would also have been a needed salve to the wounds beleaguered Israeli populace and a clear message to Palestinians that terrorism has consequences. George W Bush's 2004 letter to Prime Minister Sharon, which enshrined the idea that Israel would not be expected to yield the main settlement blocs (where the vast majority of settlers live) in any final peace negotiations, was in fact a much more radical step than simply saying that Jerusalem is Israel's capital and offering the possibility that it could also be a Palestinian capital.  The US also could have stated an intent to recognize Jerusalem during the Camp David or Taba negotiations, as leverage to keep the Palestinians at the table.  They could have done it when Rabin was murdered or at other times when Israel really needed support from its closest friend.  In short there were many chances to do it where it could have had a positive impact on what Bush 43 called "The Roadmap" to peace.
So why now?
Yes, there are signs that the Sunni world, led by Saudi Arabia, has fatigued of the Palestinian - Israel conflict and could be realigning alongside Israel against Iran.  There are signs that Palestinians are weakened and have lost faith in their leaders, and yes, as of this moment, the response has not been as violent as many had feared.  But that can change in a millisecond - and the Times of Israel's analyst suggests that in Gaza things are heating up for real.  Enough rockets have been shot toward Israel over the past few days to indicate that it's more than a random attempt to let off steam.  Had Hamas succeeded in kidnapping Israeli soldiers, a plan thwarted this week on the West Bank, we would already be in the midst of a dangerous spiral leading almost certainly to war.  Meanwhile, Jewish teens in a Swedish synagogue were firebombed this week, and the New York subways too, with the perpetrators referencing the Jerusalem decision.  There is no excuse for terror, nor should such threats keep us from making bold, calculated risks for peace.  But there is also no doubt that the short-term impact of  Trump's gambit was to make the world a more dangerous place.
All of this downside and there is no upside.  There is no "roadmap" anymore (nobody even uses road maps anymore - everyone has moved on to their own version of Waze).  If this announcement had been part of a comprehensive, coordinated diplomatic strategy, we would have seen Israel and the US respond instantly in a manner that would have capitalized on the moment to reduce tensions and not increase them.
Since no follow up announcements by either the US or Israel have been made to reduce tensions, we can only assume that the timing of this decision was not diplomatic at all.  I'm not sure if the State Department has any diplomats left, much less a real diplomatic strategy.   That leaves us with some combination of three possibilities:  1) it was impulsive, 2) it was diversionary and 3) it was purely political, designed to appeal to US evangelicals and, most specifically, the huge number of evangelical voters in Alabama, 80 percent of whom voted for Roy Moore this week.  In other words, the most logical reason I can think of why this decision was announced when it was announced, just two days before President Trump was to go all-in for Moore at a rally in Florida, and just a week before a special election, was to rile up evangelical voters who see Jewish control of Jerusalem as part of their end time aspirations.
And for that, some people have died and many more could still, and the prospects for a two-state solution have only gotten dimmer.
Let's play that back.   The fate of the most sensitive square mile on earth was tossed around like a football simply to win a few more votes for Roy Moore on Tuesday.
And how'd that work out for ya?

Which brings us to the third part of my statement.
Let me put it this way.  If a someone were to stand on Mulholland Drive and flick a match into the tinderbox hills surrounding Los Angeles, what would happen to that person?  How many years would s/he spend in jail for acting so irresponsibly?
Jerusalem is arguably the most combustible diplomatic tinderbox ever known to humankind.  President Trump tossed a lit match into it.  It gave many Israelis and other Jews a terrific sugar high but little else, nor was Israel asked to respond in kind with a gesture toward the other side, as  Thomas Friedman wrote.  It was the art of no-deal.
I will not litigate here all the concerns I have about this president, save to say that almost daily we see yet another affront to core Jewish values, as demonstrated just this week in these two  alarming articles and a tweet from beneath the gutter.
A year ago, I promised after Election Night that I would remain vigilant, but I also give the benefit of the doubt and prayed for the new president's success.  Sadly, many of my fears have been borne out, which poses a dilemma for someone, like me, who wishes both to be vigilant and charitable.  Right now, vigilance must trump all else.  While I respect those who choose the celebrate the decision to recognize Jerusalem; I am simply unable to separate the decision from the decider.
I find the accolades by Jewish groups, including our own Conservative Jewish leadership, to be perilously short sighted.  Yes, supporting a just decision that should have been made decades ago is an easy choice; it's an "apple pie" issue, like standing for the national anthem.  But given the extreme nature of the dangers we face right now, I believe that those Jewish groups who have fallen in line are mistaken.  It gives me no pleasure to say this.  For them, it's more about the decision.  For me, it's all about the decider, the dangers our democracy is facing, and how I will not allow myself to be an enabler.

If any other US President had made that decision, I'd be cheering the loudest.  If Chester Arthur had recognized the Jews' right to have a capital in Jerusalem, I'd have been down with it.
I will never forget thee, O Jerusalem... but neither will I become complicit to someone that could lead Jerusalem - and the world - down a very dangerous path.

Next week I'll be in Jerusalem to once again profess my love to our eternal capital in person.  For those who aren't with me, let me wish you all a fruitful 2018 - and make your reservations now to join me in Jerusalem next summer.