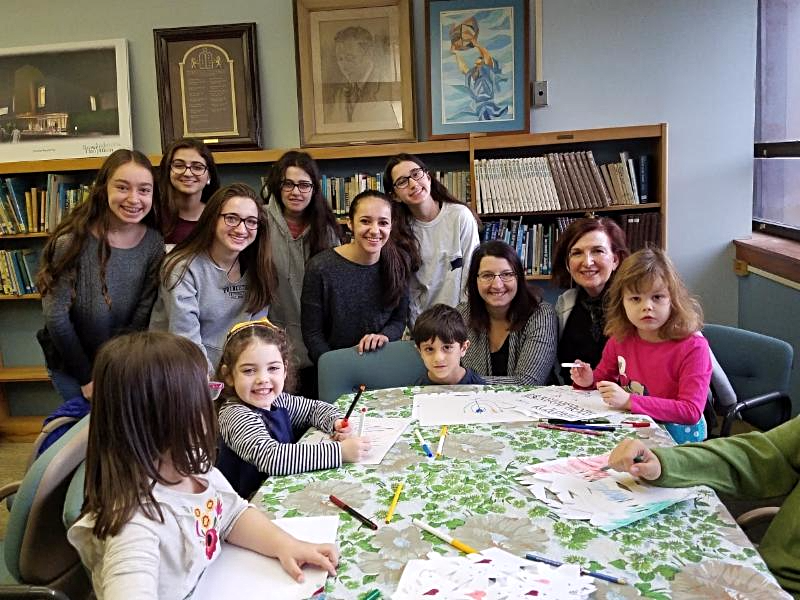 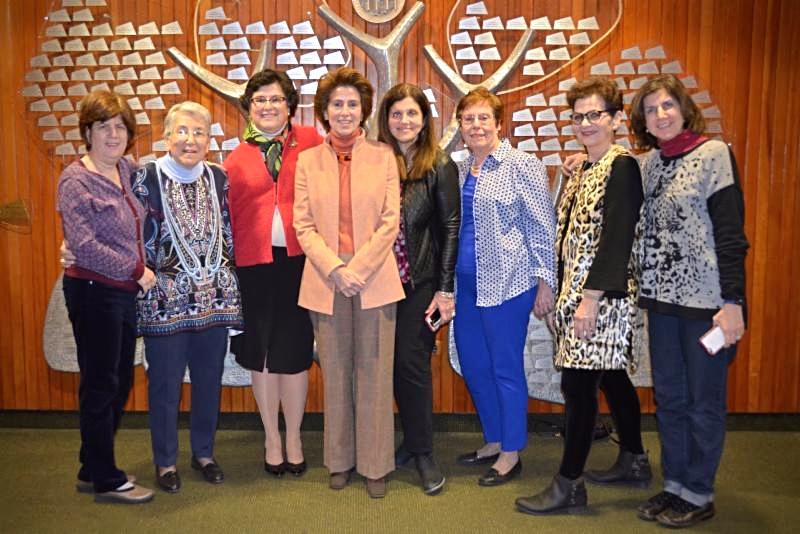 What a day last Sunday, as our Hebrew School students participated with our teens by makig cards for the BBYO Mitzvah project. Collected toys will be donated to the pediatric unit of Stamford Hospital.  And Cynthia Blumenthal wowed everyone as guest speaker at Sisterhood's paid up membership brunch.   Click here to see our winter photo album, featuring pics from both events, along with a third grade Noah's Ark skit.  Thank you to Stephanie Zelazny for superb photography!

Join us on Friday night for a "December Dialogue" with Rev Mark Lingle on the Messiah, as the first part of a "home and home" series with St Francis Episcopal Church.  I'll be speaking at St Francis on Sunday at 10 AM.  Please make sure to welcome our guests on Friday night!  We'll also be celebrating with the Brewer / Waldman family, in anticipating of Jared Waldman becoming bar mitzvah shortly in Israel.  Jared is the son of  Gina and Brian Waldman and grandson of TBE's Wil and Carol Brewer.  Gina grew up here and she really wants to celebrate his upcoming simcha with her "home" community.  It will be a delightful evening.

See my comments on Shabbat morning's Shabbat-in-the-Round below.

Also please note that the ISRAEL TRIP DEADLINE IS ONE WEEK AWAY. A good number have expressed interest but we need reservations and deposits to make our go / no decision.  To reserve  or to see the itinerary and details, go to http://www.keshetisrael.co.il/groups/6203

ALSO, DON'T FORGET TO SIGN UP FOR NEXT FRIDAY'S HANUKKAH DINNER!

Check out this great video done by the students of Weshill High School, featuring some of our teens - and prodiced by TBE's Dani Cohen!

Hanukkah: It's Complicated
Hanukkah, which begins on Tuesday evening, is complicated. Nothing is as it seems. For one thing, it is the festival the ancient rabbis wanted to get rid of. They hated the Maccabees (primarily because their descendants, the Hasmoneans, became corrupt rulers) and devoted very little space in the Talmud to discussions of this holiday. Purim gets an entire tractate, Hanukkah barely a page.  But it was too popular to get rid of.  So the rabbis tried to gerrymander it to fit their visions.
Some have asked me how we can say, in the blessing, that we are "commanded to light the Hanukkah candles," when Hanukkah is not even in the Torah and doesn't seem to have been commanded anywhere.  The rabbis got around that one by invoking a verse from Deuteronomy ascribing special authority to sages living during the Second Temple period.  It's complicated, but the idea is that the verse gave these sages authority to give a non Torah activity "mitzvah" status, to be included among the 613 commandments.  So a new commandment was shoehorned into the Torah for a holiday that's post biblical.

Even the simple dreidel game, one of Hanukkah's best known customs, is complicated. It's in fact derived from an English and Irish medieval Christmas custom.  Sorry, Virginia, it's one of those freaky ironies of Jewish history that in order to celebrate a holiday that marks our victory over cultural assimilation, we play a game that resulted from cultural assimilation.  You can read more about the origins of the dreidel and more Hanukkah exotica, here.
As we delve more deeply into Hanukkah and find other examples of cultural borrowing.  What is this season about, after all, for so many cultures, but the spiritual power of fire and night.
In a technological society, one of the great purposes of religion is to enable human beings to return to the bare essentials of life.  In our age, religion serves as a sort of paint stripper, removing layer upon layer upon layer of artificiality, reminding us who we are and where we come from, begging us to embrace simplicity and rediscover the basics.
Hanukkah is the holiday of fire and night, two of creations most necessary, and most feared, phenomena.  The festival comes at a time when the days are shortest and even the night sky is at its darkest - since it is the end of the Jewish month.  With no sun or moon to light up the sky, and December's winds blowing briskly, it is up to us to create the fire that will sustain us physically and spiritually while the days begin to grow longer and the moon larger.
On Hanukkah we light that fire, demonstrating that human beings have the capacity to create light and harness the power of fire. That's why it's possible for so joyous a celebration to occur at so dark a time of year.  The fact that Hanukkah begins on the 25th of the Jewish month of Kislev and Christmas occurs on the 25th of December is not entirely coincidental - and this year, the stars are aligned perfectly and the two dates coincide.   Both holidays are responding to the universal and ancient need to light up the night of winter - it's a need that gave rise to all the winter festivals celebrated throughout the world.  It is the bond that links the flickering Hanukkah menorah to the Christmas tree, and it is a need that predates both.
You can read here how Christmas originally was moved to the winter months in order to compete with Zoroastrian and then European pagan celebrations.  Also, at this time of year, Hindus in India, and all over the world, celebrate Diwali (or Deepawali), a festival of lights that is as big as Christmas is for Christians. And the Chinese New Year, celebrated in several weeks, is also a festival of light featuring lanterns and flames (and if you've dodged the fireworks in Chinatown on that day, you know exactly what I mean).
So cultures share.  That is a fact - one that we should celebrate.  We are all human beings, after all, with the same fears and hopes.  But we Jews also celebrate the uniqueness of the Jewish experience, with our great heroes of the battlefield and of the spirit.  And the fact that our ancestors had the faith to light the lights, even when all seemed so hopelessly dark.
--------------------------
Also, see these Hanukkah goodies from the Rabbinical Assembly:
A Prayer for Each Night
About the Liturgy of Hanukkah
Discussion Sheets
History, Laws, & Customs
Prayers & Kavannot (meditations before lighting candles)

Hanukkah is a great time to discuss freedom of religion, which has all kinds of connotations these days, but in Israel it has a special meaning for Jews, especially those Jews who are denied the right to practice their brand of Judaism.  It was wonderful to hear Rabbi Uri Regev discuss the critical issue of religious freedom in Israel, last Shabbat. Uri's presentation was passionate - stirring, in fact - as he laid out the challenges facing Israel as it strives to maintain itself as a Jewish and democratic state, a distinction that, he believes, should not be made.  Israael has some significant challenges in this area, as illustrated by this freedom of marriage world map, which puts Israel in some unenviable company.  Just two days after Regev spoke here, Ehud Barak made some of the same points in a New York Times op-ed.

At the end of his presentation, Uri spoke about a "Vision Statement" that he wrote with Rabbi Marc Angel, one of the most well-regarded Modern Orthodox thinkers in the US, today, describing the imperative for Israel to address the repair the rent in Israeli society that has been caused by the rise in the power of religious fundamentalists aided by their allies in the political world.  The statement, subtitled "Israel as a Democratic State", has already been endorsed by religious leaders in North America and Israel, representing the spectrum of Jewish belief, leaders of major national Jewish organizations, philanthropists - even celebrities like Michael Douglas Mayim Bialik. With them, over 750 people have signed the statement...including me.

Here is a link to the statement so that you can read it and, hopefully sign onto it, joining with us in expressing your commitment to Israel's future as an inclusive, welcoming, and democratic Jewish state.

A primary goal of mine has always been to release prayer from the shackles of routine and rote.  The words should fly out of the prayer book, by way of our hearts, heavenward.  There are a number of great obstacles to such Kavanah, a term that means "direction" or "intention," but really connotes aim, or focus.  Too many distractions deny us from total immersion in prayer, whether they be our own preoccupations or the simple distraction of fellow worshipers conversing.  The greatest impediments to prayer are our feeling of discomfort with the text, with the choreography and with God.
Sometimes it seems as if you need a PhD to understand the prayer book.  Sometimes the ideas found in it are objectionable.  It requires great energy to pray.  What we fail to appreciate is how prayer, when done with Kavanah, reinvigorates us, providing us with new sources of energy and focus to tackle the problems that confront us.  That's the secret behind the power of the morning minyan for those who are compelled to begin their day with it.  It's hardly an obligation; prayer is a gift.  For the early riser, it's a spiritual jog in the park.  We need it.
This Shabbat morning, we will feature the second in our series of "Shabbat-in-the -Round" services.  The idea is behind this service is to enable us to encounter prayer in a manner that is meaningful to you, so that the prayer, in a sense, becomes you.  That service is an important step for many looking for a gateway to a richer Jewish life.
We've long since passed the point where Judaism will sustain itself because of guilt.  Those who come here out of obligation alone are to be commended for their commitment, but that commitment rarely can be transmitted to the next generation.  The only way for Judaism to grow is if it enriches lives.  Those who attend services regularly have begun to discover this dark, hidden secret: prayer can be fun.  To the extent that the person who comes only rarely feels like an outsider when entering the sanctuary, it's often because that person sees lots of other people really enjoying that which he long ago had abandoned as boring and tedious -- and she can't figure out how to be a part of all that.
Here's how.  Come this Shabbat morning.  And come after that, to any of our services.
Happy Hanukkah to all.  As our congregation continues to strengthen and extend its loving embrace to all Jews and all humanity, there is little doubt that our descendants will look back on us one day and say, "Nes Gadol Haya Po," "A Great Miracle Happened Here."
Posted by Joshua Hammerman