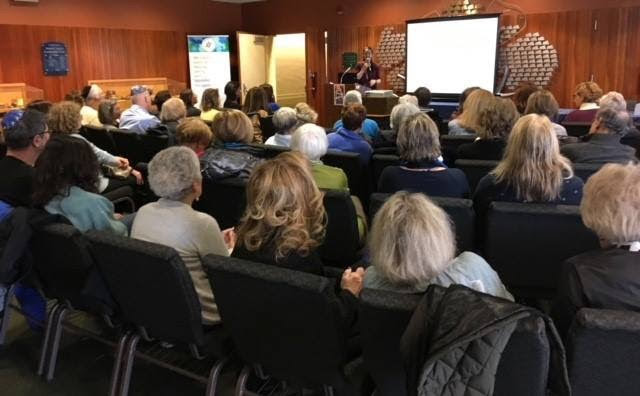 A big crowd gathered here last Sunday to hear Georgia Hunter speak about her best selling Holocaust novel , "We Were the Lucky Ones,  That astonishing lecture was followed by another stirring presentation, at our community Yom Hashoah event, by the daughter of Righteous Gentile Irene Gut Opdyke.  It's hard to recall a week when we were privileged to hear two speakers who were so inspirational.

Thank you to David Camner, who spoke last Friday night.  Here, in pdf form, are the lecture notes for his Healthcare Plan, which he share with us last week.  and speaking of research, Sally Levine recently did lots of research on where to donate medical equipment and supplies.

Welcome back to Cantor Fishman, who will be joined by Chris Coogan and myself in leading services this evening.

Next Wed afternoon and evening, we will join with the community in a very special Israel @70 celebration at the JCC. Cantor Fishman is directing the music.  Our kids are helping with the big Lego project.  I can't wait!  Join us!

The Power of Ten

Who knows Ten?  Carol Krim knows ten - the number of minyan, as today she completed her eleven months of Kaddish and provided a lovely breakfast after minyan.  Carol has supported the minyan for years, but this year has been special.  To thank everyone, Carol wrote a tribute to our morning minyan "regulars."  Only when you have experienced the embrace of fellow sufferers, day after day, morning after morning, can you understand the true power of communal prayer.

With Carol's permission, I'm sharing her tribute, in the hopes that it might encourage more people to help us out.  Start with one day a week.  Even once a month, you can feel the love in the room. Minyan attendance often goes under the radar in comparison to more high-profile volunteer opportunities at a synagogue, but there might be no more important task.

What I have learned while saying Kaddish at TBE ....
by Carol Krim
Beth usually knows what page the Torah reading is on.
Harvey gives the 'start' time and felt badly when he missed minyan once due to the snow. Today is his birthday.
Warren gets to services a lot before work and loves to daven the first line of a paragraph aloud.
Susan Schneiderman leads each passage slowly and deliberately and loves coffee.
Bert practices his Torah portion in his car and wishes everyone a happy day.
Steve D. reads Torah every Monday.
Sy and Harriet are a great team.
Mark L. sold his RV after traveling to almost every state.
Gail sings harmony every Monday.
Rob chants Rosh Hodesh Aliyah every month.
Dick F.  travels farther now that he moved downtown.
Irwin davens quietly while waiting for service to begin.
Stu loves morning minyan.
Phil always comes with a smile.
Susan Sabreen is active with Indivisible  and Jewish Historical Society.
Sol's Father lived in the Bronx.
Rabbi has a really lovely davening voice early in the morning.
Gerry is almost done his Rabbinicial studies.
Steve L. comes every Monday.
Jim B.  wears his red down vest all year round....
Barbara J. loves to hike.
Jerry R. comes on Tuesdays.
Sharon and Jeff became grandparents again.
Karen H. Has a lovely voice.
Neil S. joins in all the prayers.
Eileen does it all beautifully and efficiently and forgets nothing. Frank would be proud.
Allen came graciously when I called home.
Music to our ears is when the metal hangers jingle, meaning someone else has arrived to help make ten.

Thank you to everyone who comes regularly and thank you to all those who went out of their way to help me say Kaddish. I appreciated all you did. I also attended services in Bethesda, California, Florida, San Francisco, Philadelphia, Long Island, Orange, Mt. Kisco, NYC, Agudath and Stanford Sierra Camp in Lake Tahoe,  and appreciated every friendly face who made it a point to welcome me.

With Yom Hashoah still on our minds:

-  Interesting reading - Thane Rosenbaum's "Is there anything left to say about the Holocaust?"
-  Holocaust Awareness and Denial Levels Around the World
-  Survey reveals gaps in knowledge of Holocaust history Americans believe it can happen again.
- See the study - 7 in ten Americans say fewer people care about the Holocaust than they used to
- Holocaust timeline
The study indicated that:

Can Pigs Fly...and be Kosher Too?

You may have seen the recent news that a noted rabbi in Israel has declared that laboratory-manufactured pork is not only Kosher - but you can eat it with a glass of milk!

Kashrut, which is the prime topic of this week's portion of Shmini, is one mitzvah that has been near and dear to me - and not just because I proclaimed the era of the Kosher Oreo as a benchmark in American Jewish identity.


We'll be discussing this piggish question at services tomorrow.  Here is the discussion packet and fact sheet on Kashrut, and some links to additional "How tos" and "Whats."  With its roots in the Bible, the system of defining which foods are Kosher was developed by the rabbis of late antiquity. Its application to changing realities has been the work of subsequent generations, including our own.

So what of the "whys"? Why Kosher? Louis Jacobs writes, "Unlike the ethical and moral precepts of Judaism, the dietary laws seem to defy human reasoning. Why should it matter to religion what a man eats and, if it does matter, why are these particular items of food singled out as forbidden?" Maimonides believes it was a matter of good health.  Nachmanides sees it is beneficial to the soul rather than the body.  The Torah sees these laws through the prism of holiness.

From my perspective, the "whys" boil down to identity, spiritual discipline, ethics and social connection.  Kashrut preserves Jewish identity as a contact point for Jews across the globe and across the ages. Culture, after all, is transmitted though the stomach.  Tastes and smells are deeply embedded in our childhood memories.  Kashrut enables us to eat ethically and not indiscriminately, focusing on the sanctity of life and the pain of the animal.  It turns eating from a basic biological instinct to a sacred activity.

So join us tomorrow morning to see whether pigs can fly - right onto your dining room table!

I've gotten wind of a rumor that in several weeks there will be an anniversary celebration of some sort.  It can't have anything to do with me, because I just arrived here yesterday.

But this 30 year anniversary thing has given me reason to look back through my files, and I've discovered two things:

1) I've been running in place the last three decades, pushing harder and harder but with little to show for all that huffing and puffing. 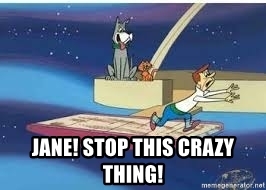 And 2) Everything has changed dramatically.

Exhibit A: The bulletin from October, 1992 (my first year as senior rabbi,) - see excerpts here.  On page 9, you can see my explanation of what a tallit is.  What I say on this page is nearly identical to what I told our 7th graders two months ago at the "World Wide Wrap."  Some things haven't changed one iota.

But the section on the right hand side entitled, "What about women? - That part is different.  Back in 1992, very few women in this congregation wore a tallit.  While it's still considered optional, far more wear them now.  But the real shocker is that back then, I embarked on a campaign to have B'not Mitzvah girls wear them.  Before this article was written, not a single one had broken the ice.  But the culture has changed dramatically.  For a girl, equality in public ritual is seen now as a right, not a privilege.  Almost every Bat Mitzvah girl now wears a tallit here.

Is TBE a more inclusive congregation now than it was 30 years ago?  Hard to say.  Have we been a force for good as social changes have come about?  Also hard to say.  But while we may not have been the ones to steer the ship, I'd like to think that at least we've been on the boat, rowing as hard as anyone, and occasionally, just occasionally, setting an example that others could follow.  We did that with LGBT rights, for sure, as I spoke about in my seminal, autobiographical Yom Kippur sermon in 2007.  Ours is a God of love.

And now, just last week, our board signed on, nearly unanimously, to the HIAS Welcome Campaign, and now a task force will be determining just what we as a congregation can do to alleviate the plight of refugees worldwide, as has always been the Jewish way.

So some things have changed dramatically over the past thirty years, and we've changed along with them.  But somethings have not - our core belief in a God of love and a culture of welcoming the Other being among them.
Posted by Joshua Hammerman