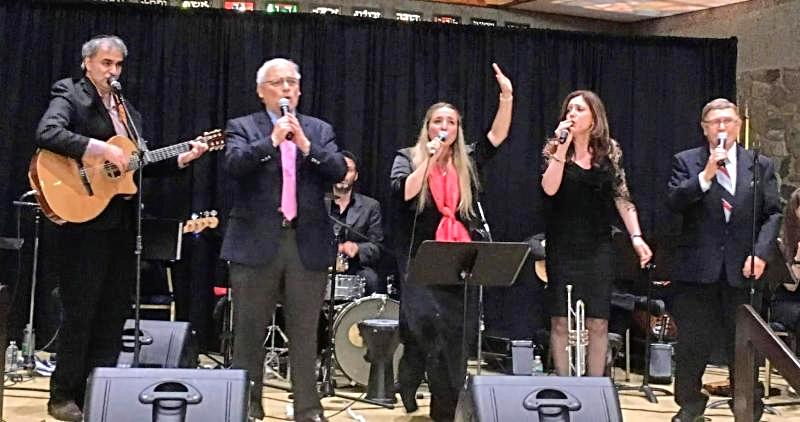 Four cantors and a rabbi at last week's concert.  Click here for the full photo album (and thank you Aviva Maller for the exquisite photography).

Screen-grab of former B'nai Mitzvah leading Ashrei on Shabbat morning.
Click here to see archived video of the Shabbat morning service,
along with the article that appeared in Saturday's Stamford Advocate.

I'm sending this O-Gram out a little early this week for two reasons;

1) To thank everyone for what was a very special weekend.
2) To crow about what we've got coming up this week.

So let's begin with last week.  Both the concert and the service were overwhelming experiences for me and for my family - and for many of you as well.  It was so important for me that this be a celebration of TBE's past and its future, not simply my own, and that is exactly what it was.  Being able to celebrate the engagement of one my cousins to a four-generation TBE family perfectly amplified the blending of the personal with the communal.

Seeing four of our cantors singing harmoniously together enabled all of the years to blend together into a coherent whole, a unified vision (despite their musical diversity - and indeed because of it).  My thanks to all of them, and in particular to Cantor Fishman, both for her artistry and vision.  It all came together perfectly.

So did Shabbat morning - it all ran seamlessly.  Devra and Lisa's words were most meaningful (and appreciated), and I know that their involvement went far beyond the d'var Torah.  I'd like to thank everyone who helped - all the Torah readers, service participants, along with the committee members, Aviva for her photos, and... 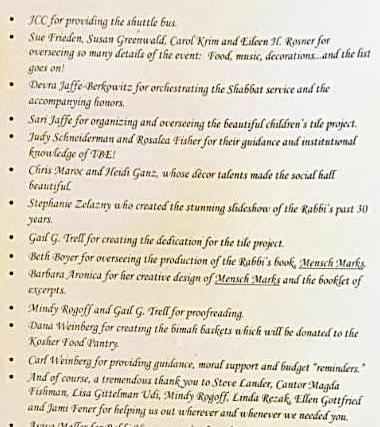 I apologize for not having the chance to thank everyone more personally, but so much to do, so little time...

2) To crow about what we've got coming up this week.

This Friday night we will be joining together for a special musical Kabbalat Shabbat at Mill River Park.   I've long been a fan of outdoor services, ever since we started doing them outside the sanctuary windows in the '90s.  The "camp-style" feel lends itself to the informality and warmth we seek, and we've experienced it at places as diverse as Treetops, Camp Eisner and Cove Island - not to mention the beach in Tel Aviv and the balcony of a hotel in Safed.

This service also presents us with a chance to take our fabulous service out into the public square - and downtown will be hopping with an arts festival this Friday.  It gives total strangers the chance to connect - or reconnect - with deep spiritual feelings that might have been abandoned years ago.

Plus, good weather is predicted.  So by all means bring friends - and also lawn chairs - and prepare for something very special.  See the flyer below.

And that's not all, because Shabbat morning is our final "Shabbat in the Round" for the season.  Join us at 9:30 for breakfast, and 9:45 for a relaxed participatory service.

This will be the final Shabbat-O-Gram for a number of weeks, as I head off for our TBE Israel Trip and then vacation after that.  As I typically do, I'll be sending back some photos and highlights from Israel.  I understand Prince William will be there when we are - the first official visit to Israel for a member of the British royal family.  I wonder if he will be staying at the King David Hotel...  Anyway, if we bump into Wills, I'll be sure to send regards.

Despite a pervasive sadness for people suffering in our world, for this final O-Gram of the season I'll keep things upbeat, by sharing some excerpts from my d'var Torah last Shabbat morning.

More than human beings, we are human becomings. "Be a mensch!" was my father's message to me before he died so tragically young. And that is what I have striven to be - to set an example, possibly to be emulated by others.

All the messages, the sermons, the classes, the columns, Shabbat-o-Grams, all can be distilled to those three words - Be a mensch. If by sharing what I've learned, I can bring just a smidgen more decency to a world that has lost its moral moorings, a modicum of generosity, honesty and human connection in a world overflowing with cruelty, loneliness and deceit, then I'll have done my job.

I've been telling people that this is OUR celebration, not simply mine. The book that we spoke of the other night - Mensch*Marks - which will be out early next year, is not really my book - it's a book that we have written together over the past 30 years. You have taught me much more than I could possibly have taught you.
I see it every day. There is nobility in normalcy, in simple goodness, especially in tumultuous, cynical times such as these, where the world seems to have lost its moral moorings. In Psychology today, a mensch was defined as a person whose characteristics include decency, wisdom, kindness, honesty, trustworthiness, respect, benevolence, compassion, and altruism. Just try to be a mensch, and you can heal the world. Hillel states in Pirke Avot, "In a place where there is no humanity, strive to be human." In a world as dehumanizing as ours has become, simply being human, a mensch, is a measure of heroism. It may be the only measure that matters.

There is a gallantry in overcoming everyday challenges; like Jewels Harrison, a young man whose bar mitzvah was a resounding statement that every human being has his hour, every life has infinite value, and everyone is equal in the eyes of God. He fulfilled our special needs.

Or the of a Mel Allen, whose life was one long, exhilarating, prayer, a call to all of us to see the sublimity in the smallest things, the pitch one inch off the corner, the stolen sign, the first seasonal shifts of the wind. And who coined the most sublime expression of wonder of all, radical amazement in three short words: "How About That."

Or the things we've experienced together, like the heartbreak of Sandy Hook, the devastation of Hurricane Sandy, which we followed up with our solar panels; or those first few days after 9/11 when I sat by my phone, terrified every time it rang. Or the lessons I learned with your help - like how not to boycott Stew Leonards or make fun of football players from Denver, how to out someone at his own funeral, how to see God's image in the faces of Ethiopian children at an Israeli absorption center near Afula or in the gleaming eyes of an older Polish woman in Krakow who happened to save a Jewish teenager during the war because she came to her door and that's just what you do.

We have learned all these lessons together - about how to be human.

All the while, I've been lucky to have an incredible wife by my side - Mara's impact on the lives of the children of all our children can never be overstated(many call her for advice years after she taught them);  two amazing children who embraced their role here but even more, have become full-fledged menschen on their own.  And of course, three menschlicht dogs - and a goldfish. The fish was a party favor. Didn't last too long.

You have welcomed us into your hearts; you got us, and we understood you too.

We've had lay leadership here that is the envy of any rabbi. I used to think it was too corporate. Now I'm the one always talking about metrics and branding. I've had incredible professional partners here: staff, educators and fellow clergy, including Rabbi Goldman, z'l, who brought me here.

And I've been lucky to be part of an extended family, many of whom are here, although my mother and mother in law unfortunately could not be.

My great grandfather, Joshua J. Kastan, a saintly and strictly observant Hasid, fell in love with a woman named Mollie; but family lore has it that when they were about to be married, Mollie refused to shave her head. One can only imagine the hubbub provoked by this breach of traditional practice. Yet Joshua was no fence sitter - he stood by her and they were married, hair and all. He continued to love her through years of barrenness (attributed by detractors to her brazenness), and resisted the advice to leave her. Finally, miraculously, they had a daughter, my grandmother, Rebecca.

Rebecca, as fiery as her mother, married Samuel Hammerman and they had seven children, one dying very young. Their home was filled with music and laughter. They scraped by on Samuel's income as a tailor. To help earn money, my father, who had a lovely tenor voice, began to sing professionally. Eventually, he and his two brothers became cantors. Their fondest childhood memories included spending Shabbat afternoon together with all the cousins, gathered in their Zeyde Joshua's home.

Rebecca and Sam had 16 grandchildren, and fully a quarter of them were named for Joshua Kastan, including me, my cousins Jan, Jules and Jeffrey.

We were named for a man for whom the highest possible value was unconditional love. Ahavat Hinam. Defiant, courageous, brazen love. In a world dominated by superstition and suspicion, he dared to be a mensch.

My great grandfather Joshua died on the 15th of Av, the Jewish Valentine's Day. A few decades later, I was born on Feb. 14. I'm still striving to finish his work.

And I know I never will. But the striving is what matters. In a world of inhumanity, we have brought out the humanity in one another.

This is what religion looks like. And this is why, despite all the Korahs of our world, it is that humanity - that menschlichkeit, that will prevail.
Shabbat Shalom
Rabbi Joshua Hammerman