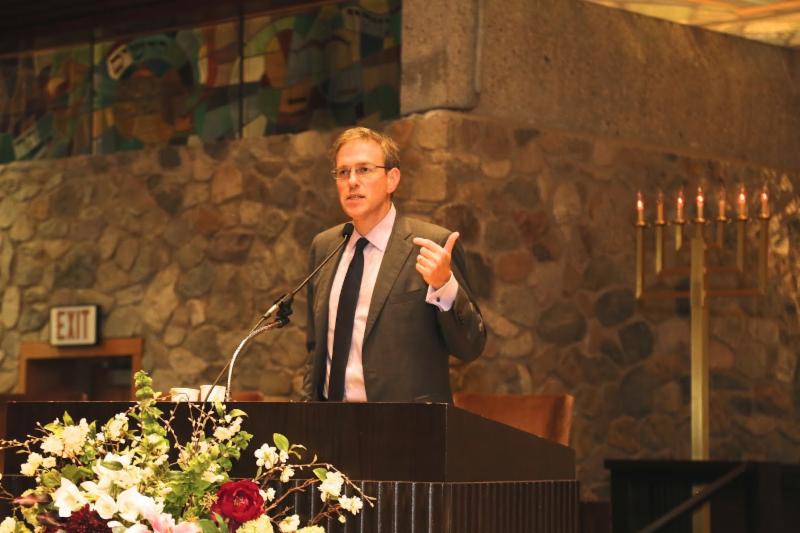 Over 400 came to hear Bret Stephens last week at the Hoffman Lecture.
See the album - photos by Aviva Maller 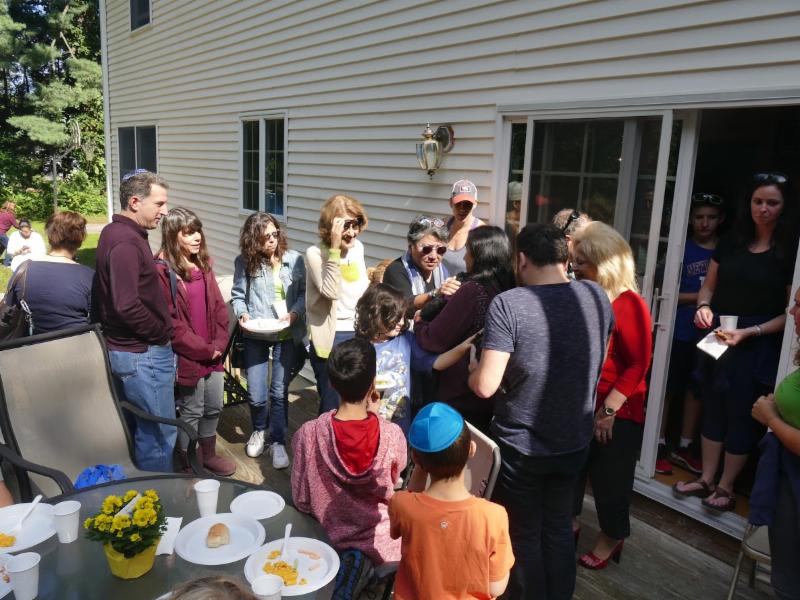 With the holidays behind us, we can now move on to important matters - like the looming Red Sox - Yankees series, their first meeting in the playoffs since the Curse-busting 2004 ALCS. Yes, the Rivalry is back. I’ve written in the past about that classic series as well as why the Red Sox are God’s chosen team. But for today, with tribalism having left the baseball stands and infected our body politic in a much more insidious manner, I’d rather lower the temperature by recalling the lesson I learned from the Voice of the Yankees and TBE member Mel Allen. You can read my eulogy for him here. At his funeral I recalled this anecdote:

Two years ago (in 1994), just hours prior to Yom Kippur, baseball officially cancelled the World Series for the first time in Mel's lifetime. Everywhere, people were in deep mourning. How could it be the fall without the Fall Classic? Where would our heroes come from? What would become of our nation without our national pastime? The baseball world, the country and the calendar were entering an autumnal abyss.

I wasn't sure what to say to Mel that evening. I wanted to comfort him in the hope that he could comfort me. So I said to him, "Such a sad day." And Mel, in his matter of fact way, which could often mask deep wisdom as plain common sense, replied: "This is not a tragedy. War, now that's tragic. Poverty and hunger, that's a tragedy. This is not a tragedy."

And I ascended this pulpit that night a whole lot wiser. Mr. Baseball, the one I had thought lived and breathed only for the game, made me understand that it was just a game, a game which lived and breathed through him, but only inasmuch as it expressed the drama, beauty and poetry of life. It wasn't the game that mattered: it was the living and breathing. It was on that night that the Voice of the Yankees enabled this Red Sox fan to understand that ultimately, we are all on the same team.

It’s something for all of us to recall.

I was so proud to see TBE Teen Menanie Roloff’s op-ed about anti-Semitism this week in the USA Today. See it here.

She writes movingly of her response to the anti-Semitic bullying she faced as a child:

Many times I ask, what if I had never met an ADL representative? What if my mother had told me not to worry? What if I stayed silent, hoping the harassment would go away and they would stop hurting me?

Instead, I was taught to stand up for myself and others. I got help, and a door was opened for me I never knew existed. My message to children all over the world is this: Have hope. Be strong, fight for what you believe, and always tell your mom and dad everything. Being bullied is not OK. It is never OK, and you don’t need to accept it or stand for it.

As bleak as your circumstances seem, it will not be dark forever if you find a community and support and make change for yourself, as I did.

Just in time for the portion of Bereisheet, which includes the two creation accounts, Wired magazine gives us the story, ”America’s Clergy are Teaming up with Scientists.” As you’ll recall, my Kol Nidre sermon dealt with the compatibility of science and religion, and we will be having a guest speaker here in early December who has founded a website dedicated to that premise, called Sinai and Synapses. The story of the creation of the universe puts that idea to its greatest test.

The American Association for the Advancement of Science has been wrestling on how to bridge this country’s religion-science divide. The Wired story states that AAAS says that seminaries are most fascinated by cosmology and neuroscience. But some schools have branched into other areas under the guidance of science advisers. For instance, divinity students at Wake Forest University in North Carolina dissected a sheep brain (thankfully that never happened at my rabbinical school). Catholic University in America seminarians discussed what finding aliens might mean for the future of their religion, while other schools hosted screenings of Ender’s Game and The Martian.

I'm a fan of the website Religious Tolerance.org.  I found there the following chart, which points out the apparent conflicts between Genesis and evolutionary theory.

Comparison of 1st creation story with the theory of evolution:

The differences, while substantial, do nothing to shake my belief that the two narratives are complementary.  Note that I said complementary, not compatible.  Yes, we can go as far as to say that days in Genesis might well have been measured in eons rather than hours.  And yes, there is a stunning symmetry in the fact that humans are the last beings created in both accounts.  And yes, the Big Bang can be said to echo the starting point of Genesis.  But the Torah account never was and never will be intended to describe scientific fact.

It's a shame that both in this country and Israel literalist forces have made this such a controversy, when, as I see it, Genesis and evolution can easily co-exist as complementary rather than conflicting stories.

Given the newest discoveries in DNA research, Darwin's theories on evolution have now been nearly universally accepted by the scientific community. Even Pope Benedict gave it his "hechsher." The evidence of our evolutionary ancestry is written all over the human genome. Intelligent Design has been discredited - notably in trials in Pennsylvania and Ohio. But that doesn't mean God is out of the picture.

There are those who are very concerned that accepting Darwin's notion that humanity is an accident of nature would be a bad thing for morality. They claim that if you teach kids that they are evolved from apes they are going to behave like murderous animals.

I guess if Darwin hadn't come around, there wouldn't have been over 250 mass shootings in the US thus far this year.

Prof Kenneth Miller, a biologist at Brown and bestselling author, disagrees with the Creationists on evolution's role on morality. The core of the Creationists' argument is that evolution is driven by mistakes. And it's true that evolution is driven by mutation. "But imagine an organism that never made these mistakes," Miller says. "We think of mistakes as being bad, but if you have no mistakes, you have no mutation, you have no evolution. What's going to happen to an organism that replicates its DNA perfectly every time? It's not going to survive. So by what standard are we calling these mistakes?"

in evolution, perfection is the road to extinction. The path to survival is the path of growth, of change, of shattered patterns.

Maybe evolution is not a mistake of nature, Miller suggests. Maybe it is, in effect, the "design" of nature, the way nature is supposed to work. Somehow, and we don't know how, something happened that drove that first amphibian to take a big gulp of air and climb ashore. Somehow, at some point, something drove that first bird to flap its wings and soar.  Somehow, at some point, a pair of chromosomes melded together - we know which ones they are - marking the evolution from ape to human. Maybe it was random, maybe it wasn't, but either way, one can easily fit a model of God into this scenario, not a God who micromanages every detail of the universe, but who created a process of flow and change that we call evolution, which reflects the will of the Creator.

One could easily make the claim that evolution is simply teshuvah writ large. Just as we make mistakes and grow from them, so does DNA. So does the universe. So does God.
I think Einstein would agree. The universe, like Judaism, has a bias for change.

Even God has evolved, at least our conception of God; it's shifted dramatically from the warrior sky God of the Bible to the Rabbis' concept of ha-Rachaman - the womb-like embodiment of love (which is also, by the way a Muslim name for God). Maimonides looked to reasoned Aristotelian thought for his God, while the Kabbalists added a sense of balance, of yin and yang, to their mystical eroticism. Arthur Green writes, "The Oneness of God, for the Kabbalists, is dynamic and flowing rather than static and unmoved." God is flowing, emanating, unfolding, and so is Creation.

God is, in fact, breath itself - the life force embodied in breath. We actually have a prayer that says just that. Nishmat Kol Chai tevarech et shimcha Adonai Eloheynu. All who breathe praise You.  To breathe is to testify to the march of life, the gift of constantly becoming, constantly growing. Even God's very name mimics the act of breathing. Yod-Hey-Vav-Hey. Pronounce it and you get the sound of breath. It's no accident. God is found in that flow of life, in the process of change, and we are created in God's image. Kol Haneshama t'halelya halleluyah says Psalm 150. The mere act of breathing is a prayer.

Columnist Charles Krauthammer (of blessed memory) wrote the following after a trial where the Kansas Board of Education tried to impose anti-evolution curricula on classrooms - and lost.

"How ridiculous to make evolution the enemy of God. What could be more elegant, more simple, more brilliant, more economical, more creative, indeed more divine than a planet with millions of life forms, distinct and yet interactive, all ultimately derived from accumulated variations in a single double-stranded molecule, pliable and fecund enough to give us mollusks and mice, Newton and Einstein? Even if it did give us the Kansas State Board of Education, too."

The God I believe in is a God of change. Our lives are governed not by stagnancy but by flow. The only constant is change, and we need to adapt, constantly adapt to it. We need to Grow with the Flow. Like nature itself, we are not perfect. We make mistakes. But perfection is the road to extinction. When we become perfect someday, we'll all have become robots. Perfection is not a goal to aim for; it is an illusion to dispel.

Evolution, therefore, is completely compatible with Jewish sensibilities and belief.  And Genesis provides us with crucial lessons on growth, change and...how we have all evolved from day one.