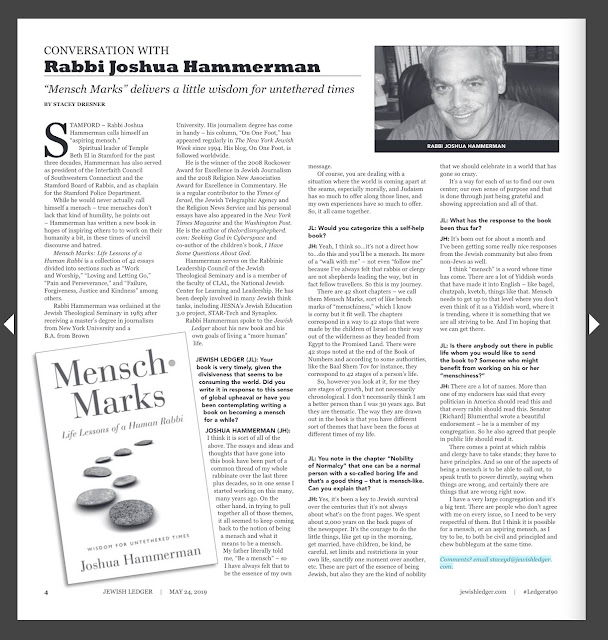 By Stacey Dresner
STAMFORD – Rabbi Joshua Hammerman calls himself an “aspiring mensch.”
Spiritual leader of Temple Beth El in Stamford for the past three decades, Hammerman has also served as president of the Interfaith Council of Southwestern Connecticut and the Stamford Board of Rabbis, and as chaplain for the Stamford Police Department.
While he would never actually call himself a mensch – true mensches don’t lack that kind of humility, he points out – Hammerman has written a new book in hopes of inspiring others to to work on their humanity a bit, in these times of uncivil discourse and hatred.
Mensch Marks: Life Lessons of a Human Rabbi is a collection of 42 essays divided into sections such as “Work and Worship,” “Loving and Letting Go,” “Pain and Perseverance,” and “Failure, Forgiveness, Justice and Kindness” among others.
Rabbi Hammerman was ordained at the Jewish Theological Seminary in 1983 after receiving a master’s degree in journalism from New York University and a B.A. from Brown University. His journalism degree has come in handy – his column, “On One Foot,” has appeared regularly in The New York Jewish Week since 1994. His blog, On One Foot, is followed worldwide.
He is the winner of the 2008 Rockower Award for Excellence in Jewish Journalism and the 2018 Religion New Association Award for Excellence in Commentary. He is a regular contributor to the Times of Israel, the Jewish Telegraphic Agency and the Religion News Service and his personal essays have also appeared in the New York Times Magazine and the Washington Post. He is the author of thelordismyshepherd.com: Seeking God in Cyberspace and co-author of the children’s book, I Have Some Questions About God.
Hammerman serves on the Rabbinic Leadership Council of the Jewish Theological Seminary and is a member of the faculty of CLAL, the National Jewish Center for Learning and Leadership. He has been deeply involved in many Jewish think tanks, including JESNA’s Jewish Education 3.0 project, STAR-Tech and Synaplex.
Rabbi Hammerman spoke to the Jewish Ledger about his new book and his own goals of living a “more human” life.

JEWISH LEDGER (JL): Your book is very timely, given the divisiveness that seems to be consuming the world. Did you write it in response to this sense of global upheaval or have you been contemplating writing a book on becoming a mensch for a while?
JOSHUA HAMMERMAN (JH): I think it is sort of all of the above. The essays and ideas and thoughts that have gone into this book have been part of a common thread of my whole rabbinate over the last three plus decades, so in one sense I started working on this many, many years ago. On the other hand, in trying to pull together all of those themes, it all seemed to keep coming back to the notion of being a mensch and what it means to be a mensch. My father literally told me, “Be a mensch” – so I have always felt that to be the essence of my own message.
Of course, you are dealing with a situation where the world is coming apart at the seams, especially morally, and Judaism has so much to offer along those lines, and my own experiences have so much to offer. So, it all came together.
JL: Would you categorize this a self-help book?
JH: Yeah, I think so…it’s not a direct how to…do this and you’ll be a mensch. Its more of a “walk with me” – not even “follow me” because I’ve always felt that rabbis or clergy are not shepherds leading the way, but in fact fellow travellers. So this is my journey.
There are 42 short chapters – we call them Mensch Marks, sort of like bench marks of “menschiness,” which I know is corny but it fit well. The chapters correspond in a way to 42 stops that were made by the children of Israel on their way out of the wilderness as they headed from Egypt to the Promised Land. There were 42 stops noted at the end of the Book of Numbers and according to some authorities, like the Baal Shem Tov for instance, they correspond to 42 stages of a person’s life.
So, however you look at it, for me they are stages of growth, but not necessarily chronological. I don’t necessarily think I am a better person than I was 30 years ago. But they are thematic. The way they are drawn out in the book is that you have different sort of themes that have been the focus at different times of my life.
JL: You note in the chapter “Nobility of Normalcy” that one can be a normal person with a so-called boring life and that’s a good thing – that is mensch-like. Can you explain that?
JH: Yes, it’s been a key to Jewish survival over the centuries that it’s not always about what’s on the front pages. We spent about 2,000 years on the back pages of the newspaper. It’s the courage to do the little things, like get up in the morning, get married, have children, be kind, be careful, set limits and restrictions in your own life, sanctify one moment over another, etc. These are part of the essence of being Jewish, but also they are the kind of nobility that we should celebrate in a world that has gone so crazy.
It’s a way for each of us to find our own center; our own sense of purpose and that is done through just being grateful and showing appreciation and all of that.
JL: What has the response to the book been thus far?
JH: It’s been out for about a month and I’ve been getting some really nice responses from the Jewish community but also from non-Jews as well.
I think “mensch” is a word whose time has come. There are a lot of Yiddish words that have made it into English – like bagel, chutzpah, kvetch, things like that. Mensch needs to get up to that level where you don’t even think of it as a Yiddish word, where it is trending, where it is something that we are all striving to be. And I’m hoping that we can get there.
JL: Is there anybody out there in public life whom you would like to send the book to? Someone who might benefit from working on his or her “menschiness?”
JH: There are a lot of names. More than one of my endorsers has said that every politician in America should read this and that every rabbi should read this. Senator [Richard] Blumenthal wrote a beautiful endorsement – he is a member of my congregation. So he also agreed that people in public life should read it.
There comes a point at which rabbis and clergy have to take stands; they have to have principles. And so one of the aspects of being a mensch is to be able to call out, to speak truth to power directly, saying when things are wrong, and certainly there are things that are wrong right now.
I have a very large congregation and it’s a big tent. There are people who don’t agree with me on every issue, so I need to be very respectful of them. But I think it is possible for a mensch, or an aspiring mensch, as I try to be, to both be civil and principled and chew bubblegum at the same time.
Posted by Joshua Hammerman