Another Glowing Review of Mensch-Marks

Review of  “MenschMarks: Life Lessons of a Human Rabbi – Wisdom for Untethered Times” by Rabbi Joshua Hammerman. It appeared in the July 12, 2019, issue of the Jewish Federation of Greater Binghamton’s The Reporter, located in Vestal, NY. You can also find the review on The Reporter’s website at www.thereportergroup.org/Article.aspx?aID=5242. 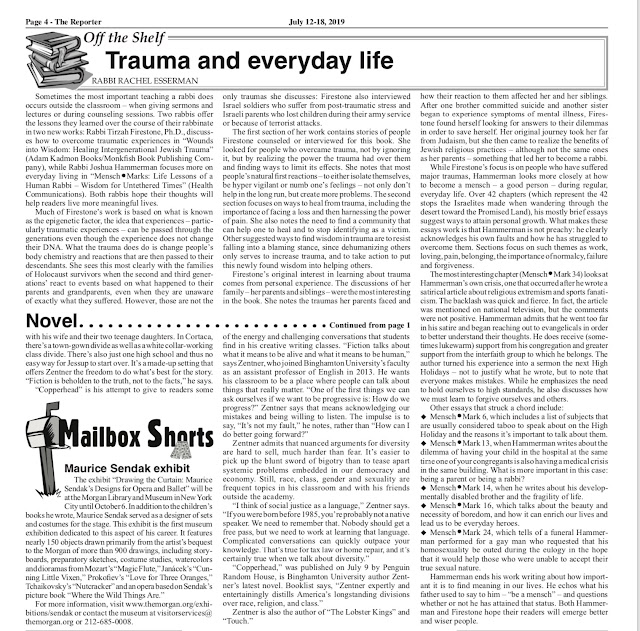 By: Rabbi Rachel Esserman
Sometimes the most important teaching a rabbi does occurs outside the classroom – when giving sermons and lectures or during counseling sessions. Two rabbis offer the lessons they learned over the course of their rabbinate in two new works: Rabbi Tirzah Firestone, Ph.D., discusses how to overcome traumatic experiences in “Wounds into Wisdom: Healing Intergenerational Jewish Trauma” (Adam Kadmon Books/Monkfish Book Publishing Company), while Rabbi Joshua Hammerman focuses more on everyday living in “MenschMarks: Life Lessons of a Human Rabbi – Wisdom for Untethered Times” (Health Communications). Both rabbis hope their thoughts will help readers live more meaningful lives.

Much of Firestone’s work is based on what is known as the epigenetic factor, the idea that experiences – particularly traumatic experiences – can be passed through the generations even though the experience does not change their DNA. What the trauma does do is change people’s body chemistry and reactions that are then passed to their descendants. She sees this most clearly with the families of Holocaust survivors when the second and third generations’ react to events based on what happened to their parents and grandparents, even when they are unaware of exactly what they suffered. However, those are not the only traumas she discusses: Firestone also interviewed Israel soldiers who suffer from post-traumatic stress and Israeli parents who lost children during their army service or because of terrorist attacks.

The first section of her work contains stories of people Firestone counseled or interviewed for this book. She looked for people who overcame trauma, not by ignoring it, but by realizing the power the trauma had over them and finding ways to limit its effects. She notes that most people’s natural first reactions – to either isolate themselves, be hyper vigilant or numb one’s feelings – not only don’t help in the long run, but create more problems. The second section focuses on ways to heal from trauma, including the importance of facing a loss and then harnessing the power of pain. She also notes the need to find a community that can help one to heal and to stop identifying as a victim. Other suggested ways to find wisdom in trauma are to resist falling into a blaming stance, since dehumanizing others only serves to increase trauma, and to take action to put this newly found wisdom into helping others.

Firestone’s original interest in learning about trauma comes from personal experience. The discussions of her family – her parents and siblings – were the most interesting in the book. She notes the traumas her parents faced and how their reaction to them affected her and her siblings. After one brother committed suicide and another sister began to experience symptoms of mental illness, Firestone found herself looking for answers to their dilemmas in order to save herself. Her original journey took her far from Judaism, but she then came to realize the benefits of Jewish religious practices – although not the same ones as her parents – something that led her to become a rabbi.

While Firestone’s focus is on people who have suffered major traumas, Hammerman looks more closely at how to become a mensch – a good person – during regular, everyday life. Over 42 chapters (which represent the 42 stops the Israelites made when wandering through the desert toward the Promised Land), his mostly brief essays suggest ways to attain personal growth. What makes these essays work is that Hammerman is not preachy: he clearly acknowledges his own faults and how he has struggled to overcome them. Sections focus on such themes as work, loving, pain, belonging, the importance of normalcy, failure and forgiveness.

The most interesting chapter (MenschMark 34) looks at Hammerman’s own crisis, one that occurred after he wrote a satirical article about religious extremism and sports fanaticism. The backlash was quick and fierce. In fact, the article was mentioned on national television, but the comments were not positive. Hammerman admits that he went too far in his satire and began reaching out to evangelicals in order to better understand their thoughts. He does receive (sometimes lukewarm) support from his congregation and greater support from the interfaith group to which he belongs. The author turned his experience into a sermon the next High Holidays – not to justify what he wrote, but to note that everyone makes mistakes. While he emphasizes the need to hold ourselves to high standards, he also discusses how we must learn to forgive ourselves and others.

Other essays that struck a chord include:

MenschMark 6, which includes a list of subjects that are usually considered taboo to speak about on the High Holiday and the reasons it’s important to talk about them.

MenschMark 13, when Hammerman writes about the dilemma of having your child in the hospital at the same time one of your congregants is also having a medical crisis in the same building. What is more important in this case: being a parent or being a rabbi?

MenschMark 14, when he writes about his developmentally disabled brother and the fragility of life.

MenschMark 16, which talks about the beauty and necessity of boredom, and how it can enrich our lives and lead us to be everyday heroes.

MenschMark 24, which tells of a funeral Hammerman performed for a gay man who requested that his homosexuality be outed during the eulogy in the hope that it would help those who were unable to accept their true sexual nature.

Hammerman ends his work writing about how important it is to find meaning in our lives. He echos what his father used to say to him – “be a mensch” – and questions whether or not he has attained that status.

Both Hammerman and Firestone hope their readers will emerge better and wiser people.