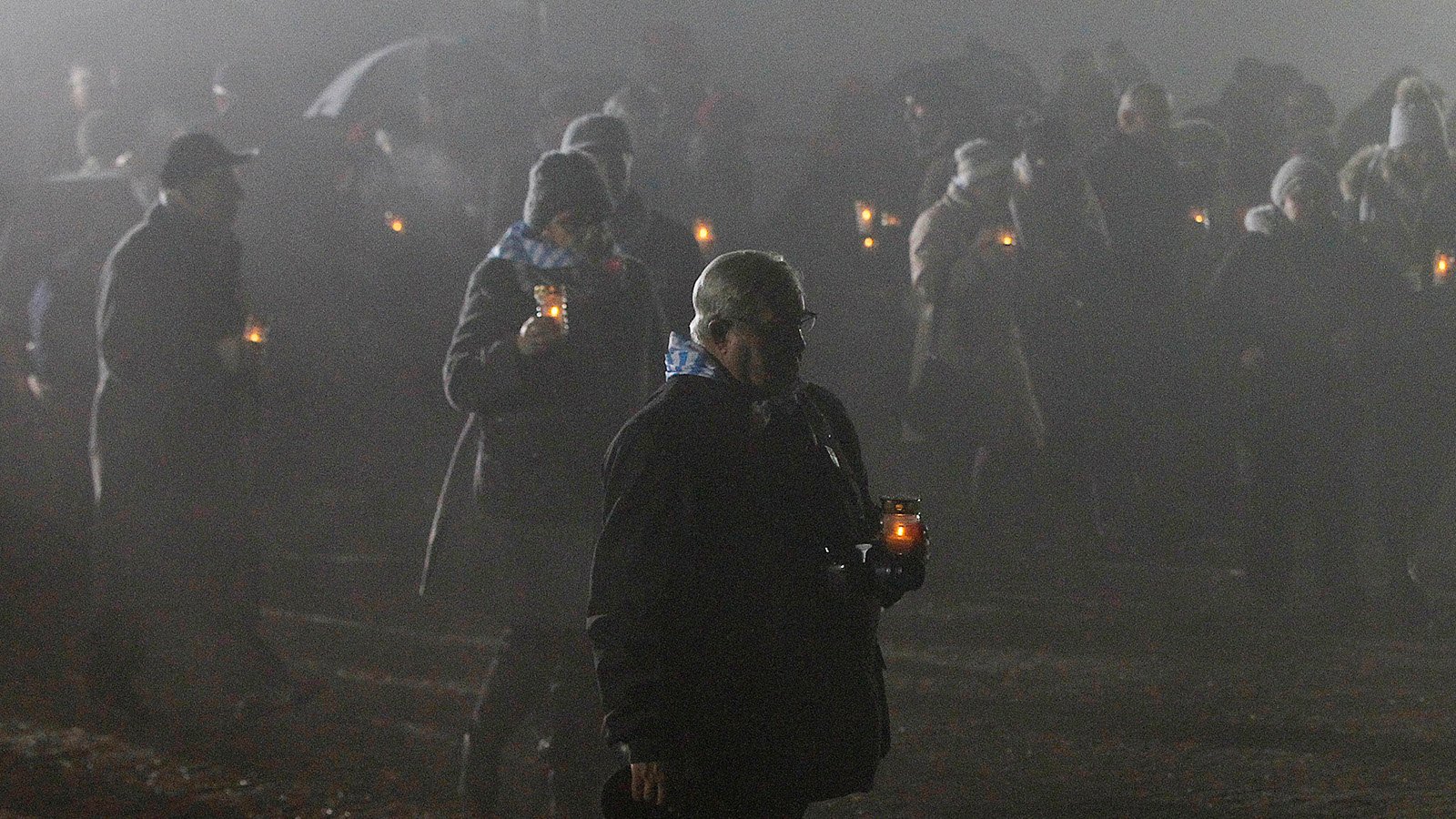 
Share
Tweet
Share
Reddit
Email
(RNS) — The 20th century Jewish theologian Abraham Joshua Heschel wrote, “There are three ways in which we respond to sorrow. On the first level, we cry; on the second level, we are silent; on the highest level, we take sorrow and turn it into song.”
These responses to tragedy mirror how Jews have responded to the Holocaust over the past seven decades, from overwhelming grief to numbed silence. Now, as we commemorate the 75th anniversary of the liberation of Auschwitz (Jan. 27), the time has come to turn the sorrow into song — in a sense, to embrace Auschwitz.
Let me be clear: There was nothing good about the Holocaust. What happened during the period of Nazi hegemony over Europe was the nadir of human history. No other event is remotely comparable. It is difficult to conceive of an atrocity so maliciously designed and meticulously carried out on so vast a scale.
I’ve spent the better part of my career as a rabbi and writer trying to reframe Judaism in positive terms. For me that means steering the conversation away from the Holocaust lest my own faith wither on the vine. This historic black hole poses questions that are unanswerable, eclipsing centuries of Jewish achievement, nurturing neurosis. It gave us an excuse to hate, and it gave our children an excuse to opt out of being Jewish altogether: Who would want to be part of such a hopeless, hapless people?
But recently I’ve discovered that the opposite is true. Judaism is being interpreted anew through the prism of this epochal event. We are hearing the first stirrings of a song. 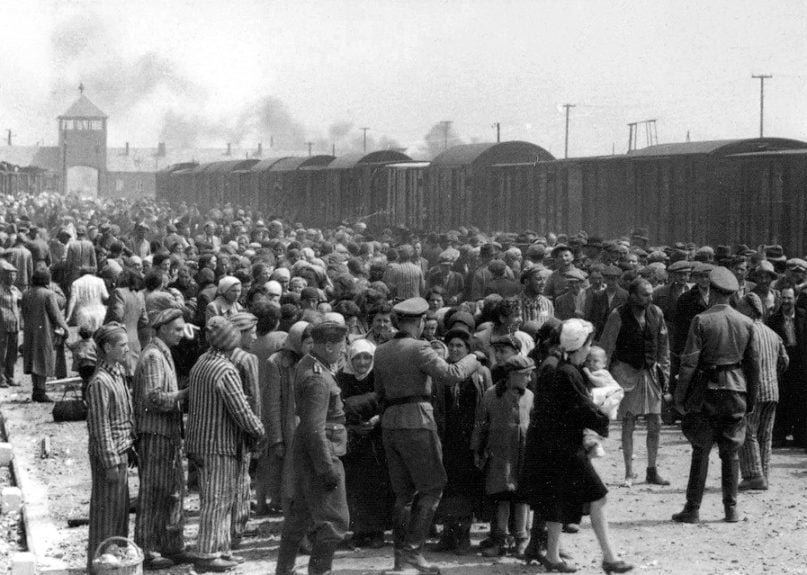 "Selection" of Hungarian Jews on the ramp at Auschwitz-II (Birkenau), Poland, during the Holocaust in May/June 1944. Jews were sent either to work or to the gas chamber. The photograph is part of the collection known as the Auschwitz Album/Creative Commons
Throughout Jewish history it has become axiomatic that approximately seven decades after an enormous disaster, new creative expressions of faith have surfaced. Just as Jews traditionally rise from mourning after seven days, so do we rise collectively from trauma after 70 years.
Seventy years after the first temple was destroyed in 586 B.C., King Cyrus restored hope to a Jewish people who had already begun adapting their religion to the new realities of residing in exile by the rivers of Babylon. Seven decades after the massacres of the First Crusade in 1096, dramatic changes began to revolutionize Jewish philosophy and law. Seventy years after the expulsion from Spain in 1492, which displaced 200,000 Jews and resulted in tens of thousands of deaths, Jewish life was replanted in Safed, Palestine, and it came to full flower with the publication of the great law code, the Shulchan Aruch, in 1565.
The year 1648 was a dark one for Eastern European Jewry, as a Cossack revolt killed upwards of 100,000 Jews. Almost exactly 70 years later, Israel Ben Eliezer, known as the Baal Shem Tov, introduced Hasidism to Polish Jews. In early Hasidic literature, the Baal Shem Tov’s followers see a direct historical link from the ordeals of 1648 to their teacher’s ministry, asserting that this charismatic leader “awakened the people Israel from their long coma and brought them renewed joy in the nearness of God.”
Seventy-some years past Auschwitz, we have a new opportunity. Here is what I mean.
First, Jews need to embrace the obligation to be surrogate witnesses as the last group of the actual witnesses departs.
Elie Wiesel said that “to listen to a witness is to become one.” What Jews were charged to do at Sinai — to be pillars of morality, a nation of priests — now takes on an added urgency. All Jews need to learn how to tell the witnesses’ stories with love and conviction and with bursting pride at their incomprehensible acts of heroism and faith.
Second, we need to recognize that the Holocaust has taken its place at the very core of what it means to be Jewish.
The 2013 Pew survey of American Jewry asked, “What does it mean to be Jewish?” providing respondents nine suggested Jewish activities and attributes from which to select those deemed “essential.” Just 19% chose “Observing Jewish law.” By far the leading answer was “Remembering the Holocaust,” at 73%.
You can’t get three-quarters of American Jews to agree on anything, not even what to put on a bagel. If there is to be a core to our self-image as Jews, it is far more likely to come from Auschwitz than from Sinai. We know as well that Israeli Jews and American Jews don’t agree on much these days, but when Israeli Jews were asked the same question, the result was nearly identical. The main gate of Auschwitz I camp in Poland, which was operated by German Nazis during World War II. Photo by Roland Fischer/Creative Commons
The Holocaust, in short, is our greatest common denominator. Any expression of Judaism to emerge from the modern era must have the Holocaust at its core, or it will not be authentic.
But just as it cannot deny the abyss, any modern expression of Judaism must also speak to the need to affirm joy, beauty, renewed life and at least the possibility of a responsive divinity, or it will not survive.
The Torah of Sinai, the backbone of rabbinic Judaism, now has a companion narrative that I call the Torah of Auschwitz, sacred teachings and practices that have begun to coalesce into a canon, enabling us to confront the darkest demons of seven decades ago. At the same time, this narrative is filled with positive and life-affirming lessons for the entire world.
Just as the evil perpetrated by the Nazis has no historical parallel, so, too, does the valor of the Holocaust era dwarf anything we have ever seen, even in the Bible. When it comes to pure courage and unfathomable love, Joshua, Miriam and David can’t hold a candle to the stories of Janusz Korczak, Mordecai Anielewicz and Hannah Szenes. The prophetic proclamations of Jeremiah and Isaiah are mirrored — and perhaps surpassed — by the immortal words of such modern-day prophets as Primo Levi, Simon Wiesenthal and Viktor Frankl.
As for Oskar Schindler and Raoul Wallenberg and over 11,000 Righteous Gentiles honored at the Yad Vashem Holocaust Memorial, the modern-day Righteous Gentile really has no parallel in the Hebrew Bible. When the Israelites were slaves in Egypt, no one offered to take them in. (Okay, Pharaoh’s daughter took in baby Moses, but that’s it.)
How can we not burst with pride at the poetry, the scraps of food shared; the secret Seders; the impossible escapes; the beautiful children of Terezin; how the victims were able to maintain their dignity and humanity in the most inhuman conditions, protecting their loved ones — even somehow falling in love?
Anne Frank, so eternally appealing is her very ordinariness, has already become a universal symbol of innocence and steadfast optimism in the face of pure evil, eclipsing ancient heroines like Ruth and Esther in our collective imagination. She has inspired multiple dramas, films and novels and drew 1.3 million visitors to her secret annex in Amsterdam in 2016 alone. The Torah of Auschwitz that is now emerging will feature her wisdom as its book of Proverbs and Elie Wiesel’s Night as its Book of Job.
The Torah of Auschwitz has already transformed religious practice and biblical interpretation. The injunction to remember (zachor) the evil perpetrated by Amalek, recorded in the Book of Deuteronomy, has metamorphosed into the post-Holocaust rallying cry, “Never again.”
It is said that every Jew, past, present and future, stood at Sinai. Every Jew also stood, metaphorically, in those gas chambers as well. It didn’t matter whether you were male or female, traditional, liberal or secular, born Jewish, converted to Judaism or married to a Jew — or even merely the grandchild of a Jew. The Holocaust has given us a common point of departure, a place where we were all present, even if we weren’t. Jewish unity, to the degree that it can be reestablished at all, is attainable only in the context of that shared experience and the affirmation that Auschwitz must never happen again.
When Jews invoke Auschwitz, the world listens — because we were there. Many hate us for that, especially if they fetishize fascism. Others admire us. But everyone listens. Let us sing.
(Rabbi Joshua Hammerman is the spiritual leader of Temple Beth-El in Stamford, Connecticut. His latest book, “Embracing Auschwitz: Forging a Vibrant, Life-Affirming Judaism that Takes the Holocaust Seriously,” will be published this spring. The views expressed in this commentary do not necessarily reflect those of Religion News Service.)
https://religionnews.com/2020/01/27/auschwitz-at-75-from-sorrow-to-song/
Posted by Joshua Hammerman

Email ThisBlogThis!Share to TwitterShare to FacebookShare to Pinterest
Labels: Holocaust and Anti-Semitism