Shabbat-O-Gram for January 10: Sanity and Sanctity: To Shame or Not to Shame; No Hate, No Fear, No Empty Seats 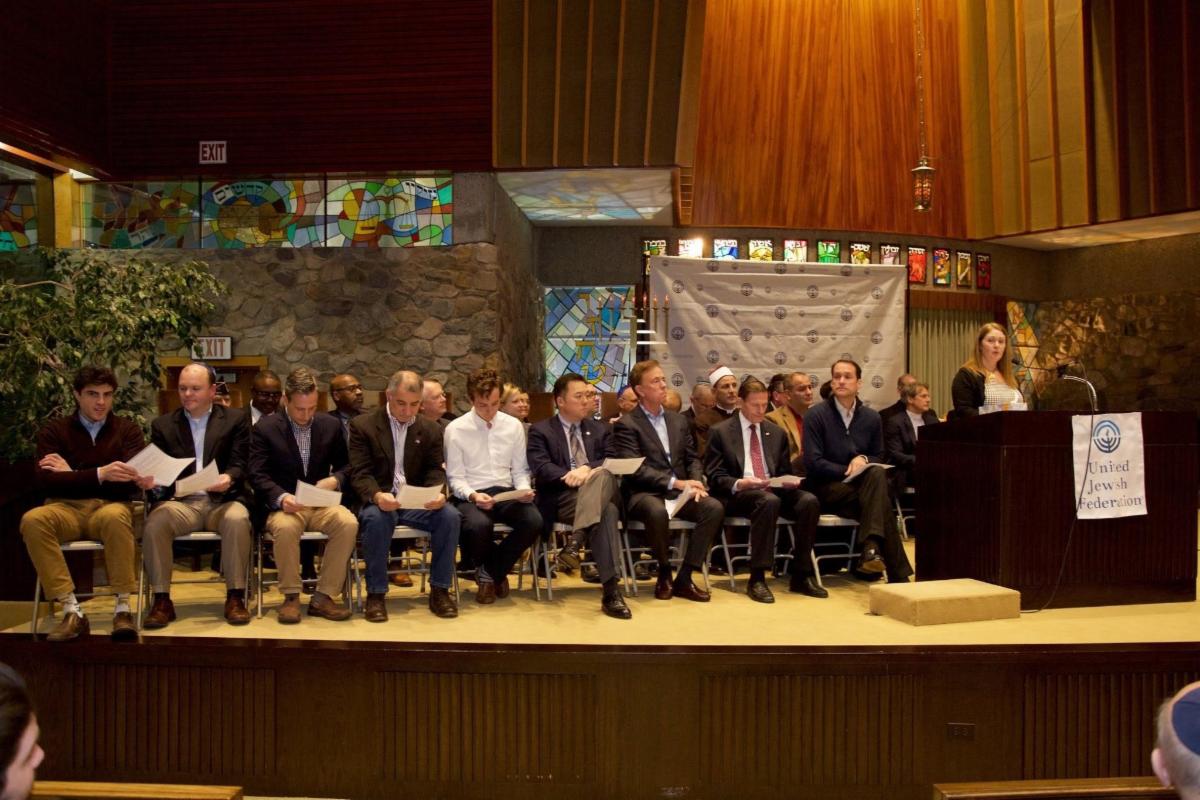 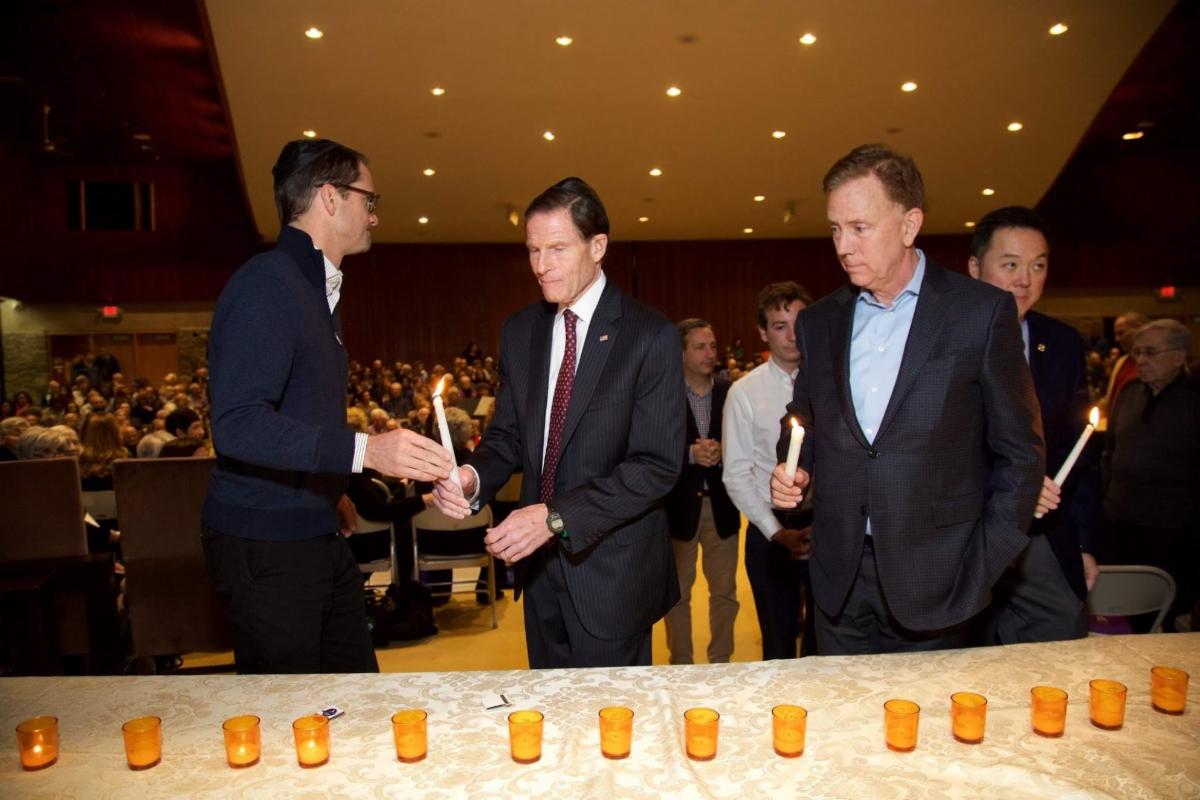 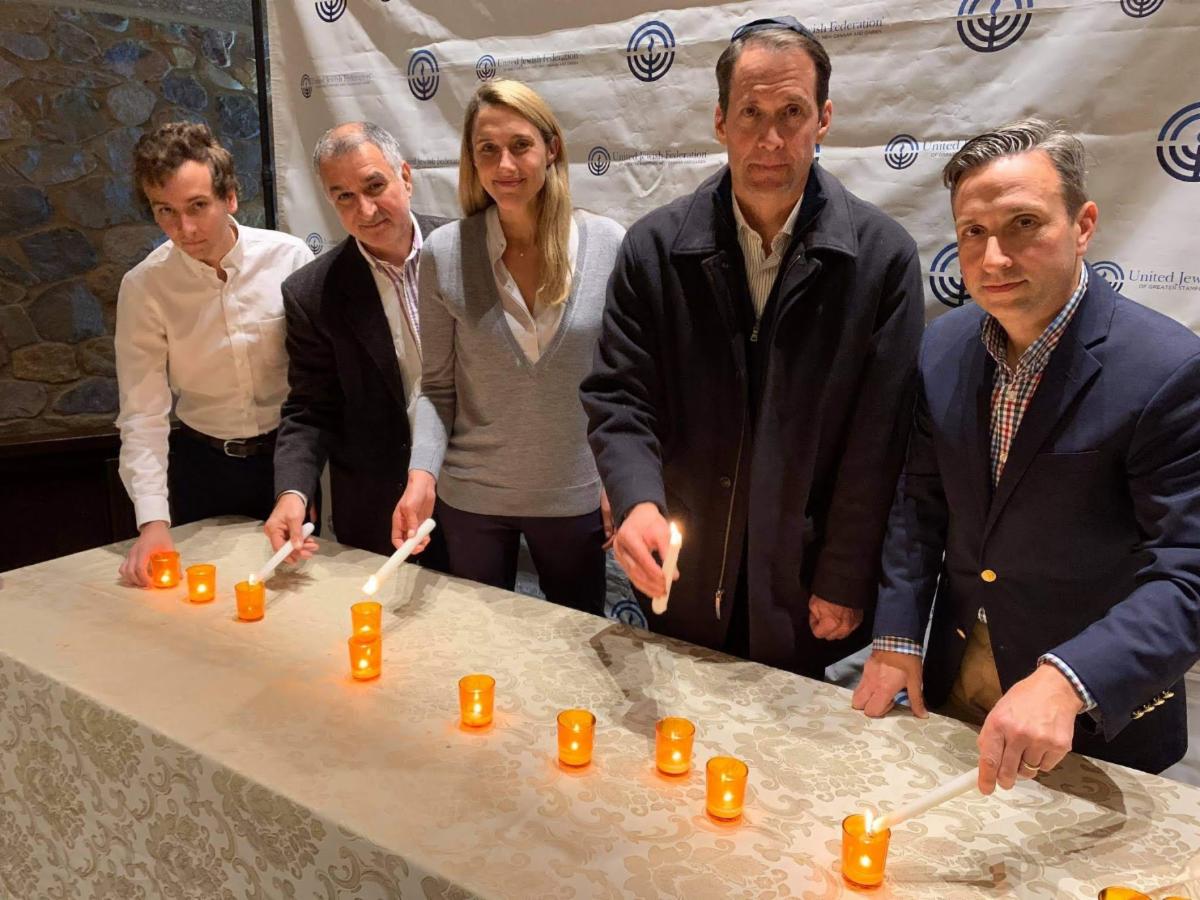 Photos by Aviva Maller from last Sunday's "No Hate No Fear" rally,
held at Temple Beth El, and convened by the United Jewish Federation,
assisted by the Interfaith Council, Board of Rabbis, AJC and other groups.
Audio and other photos from this historic event can be found here

Services on Friday night, led by myself and Katie Kaplan, will be family style at the special time of 6:30 - it will be the only Kabbalat Shabbat service we will have this week and will include the calling of Yahrzeit names. If you wish, join us for an informal bring-your-own dairy or vegan Shabbat dinner beforehand, at 5:30.  It's a great chance to meet new people and bring the warmth of a Shabbat community into our lives - and don't we need it!

On Shabbat morning, Cantor Debbie Katchko-Gray will be with us.  Lot's of action on the adult ed front.  This week's Torah portion is Vayechi.  We'll be discussing how anti-Semitism distorts our vision, and we'll see an interesting example from Torah commentaries. Preview the Parsha Packet here.  Also, see last week's parsha packet, looking back at the 2010's and calling on us to take the long view.

Join me and Rev. Shelley Donaldson of the First Presbyterian Church (the "Fish Church") for a six part interfaith conversation on the biblical books of Psalms, Proverbs, Lamentations, Job and Ecclesiastes, to be held at Edgehill Retirement Community on Palmers Hill Rd in Stamford.  The mini-series, organized by the Interfaith Council, runs on Thursday afternoons from Jan 16 - Feb 20, form 2-3 PM and is open to the public.

And our JTS "Beyond Dispute" series finally gets underway this Tuesday at 7:30. after some weather delays.  Read about it here.  We've got about 20 registrations already.

Neshama Carlebach, whom we hosted in November, wrote a stunning essay about her struggles with her father's legacy in light of the the #MeToo movement.  She writes,
"I never anticipated feeling that the allegations against my father would bring me such sorrow and purpose. I see now that the place that has brought me the greatest pain has also empowered me to offer strength to others who are also in great pain. My music has forever been changed by this hard learning. My very voice is not the same." Read the whole essay

NYT's 52 Places
The New York Times just published its 52 Places to Go in 2020 and low and behold, you can visit one of them, Krakow, with us this summer.  Check out our TBE Eastern Europe trip!  Caesarea, Israel is also on the list.

We had well over 500 people at last Sunday's community vigil (see photos above), and it was especially gratifying how many of our non-Jewish neighbors came, along with an extraordinary turnout of state, local and national politicians and law enforcement representatives.  Ariel Sobel wrote in the LA Jewish Journal that what really made the "No Hate, No Fear" event in New York monumental was that in these past three years, no one has wanted to march with the Jews.  So often, as other worthy causes gave rise to protest marches, Jewish groups have been told "thanks but no thanks."  But that changed this week.  And here as well, to see faith leaders across the board grace our bima and take time out on a Sunday night to join in the cry of outrage against anti-Semitism, that was really important.
And everyone spoke so movingly.  You can hear the audio for yourself and see what I mean. This did not sound at all like a political event.  The support was unconditional and across the board.The love was real.  So were the tears.

Thank you to Diane Sloyer and the UJF for their instrumental role in making this event come about.

TBE's Wendy Miles just completed the 7 1/2 year cycle of Talmud study called Daf Yomi (a page each day).  Here's what she has to say about the experience:

I started studying Dof Yomi at a time in my life when I felt I needed some structure. Do to my work schedule I don't attend everyday, but I do attend 4-5 times each week. I started about 14 years ago. I missed 3 years out of the 14 years do to having to say Kaddish. I enjoy the group I study with because each day a different person leads the learning, including lay people as well as rabbis from different denominations. I feel you could be an agnostic/atheist and still gain many insights from the Talmud. The most important thing that I gained from my study is to try like the great sages of the Mishnah/Gemarah (Talmud) to examine each situation from all different directions.  Even when you examine things from the top,bottom,front,back,left and right you may not necessarily come to a conclusion, and to have the confidence that it may be revealed at a later time. It is imperative to view things in all directions to even begin to make an informed decision.

Obviously, Daf Yomi is not a method of study for everyone. There isn't any subject you can think of that is not addressed in the Talmud. Though this great body of work goes back almost 2,000 years it still has relevance today , even though many of the topics are  not things we deal with nowadays . As a woman I had to accept the very different cultural in which this body of work was written . Though this is also true of all history from this time.
Like the Torah , each time you read the Talmud new ideas are revealed.
I can't wait to begin again at a celebration (Siyyum) on Sunday .

Here's what comedian Rob Kutner wrote about it for the Hazon newsletter:

As strange as it might sound, doing Daf Yomi has a lot of connections to Hazon's mission. First of all, the very idea of introducing a daily discipline, changing your lifestyle habits, is at the core of building a more sustainable world. Second, the idea of undertaking a 7 1/2 year commitment is so out of step with our modern world, and yet so necessary to taking the long view of the world that we must. As for the content, it provided me endless views into more ancient, pre-industrial worldviews that in some ways would benefit us to reconsider. It exposed me to a dizzying range of discussions as to what constitutes "Jewish values," showing that they are ultimately not set in stone (besides those, you know, tablet things) but must be grasped and shaped in each generation. And finally, studying Daf Yomi put me in connection and conversation with a wider variety of Jews than I normally traffic with.

Last week, I shared the exciting news that we can now do Daf Yomi on our own.  First, read here what the Talmud is all about.  And if you click here, you can find out how you can receive via email a daily dose of Talmud.  I've pasted below one of those daily doses, which happens to be the first one (delivered last Sunday morning).  You can find the actual page from the Talmud here.  Take a look at the text and commentary.  Sign up for the emails.  If there is interest we can facilitate group conversations as well.


Meanwhile, here is a character-based alternative for daily reflection during this pivotal and turbulent year, something I introduced last week:

Sanity and Sanctity: To Shame or Not to Shame
Middah Yomi:  Daily Dosage of Jewish Values for 2020

This week's Middah (character trait) -
Do not embarrass others (mostly)

Here are your seven doses of sanity for this week, demonstrating Judaism's focus on not embarrassing others.  Some have gone to extraordinary lengths to avoid shaming.

1) Once when their teacher had left the room for a few moments, Rabbi Moshe Feinstein's students once accidentally spilled a bottle of ink on a volume of the Talmud on the rabbi's desk.  Everyone freaked out, worried because this was the rabbi's most beloved set of books.  When Feinstein returned to the room, he saw the new blue page and said, "Doesn't this passage look wonderful in blue?"

2) The Talmud exclaims that "It is preferable for an individual to throw himself into a burning furnace rather than to publicly mortify his companion."  Public embarrassment is forbidden.

3) Pirke Avot (3:15) lists embarrassing one's neighbor as one of five acts that will prevent someone from having a share int he World to Come.

4) Maimonides concurs, saying, "One must not call another by an embarrassing name, nor relate a shameful matter in their presence, whether one be of greater or lesser stature."

5) Even in private, the 19th century sage known as the Chafetz Hayyim states that it is transgression to speak to a sinner in a harsh manner.

6) Rabbi Jonathan Raziel of Ma'aleh Adumim discusses the question of whether the listeners in synagogue should correct a Torah reader, even when this could embarrass the reader. Raziel's answer: Not embarrassing the reader takes precedence over hearing the Torah being read correctly.

7) It seems clear that had social media existed in their time, Maimonides and the Chafetz Hayyim would have stayed off of Facebook or Twitter, where public shaming is commonplace and vitriol is viral.  Or they would have helped to civilize it.  Long before Facebook existed, the rabbis recorded in the Midrash (Bereshith Rabbah 98:23), "What is spoken in Rome can kill in Damascus." Now, with that same distance traversable in a millisecond, all the more so, these words can kill.

All of that said, I think there are times when shaming is absolutely called for.  The photos of the devastating wildfires in Australia have been heartbreaking.  See this CNN report about a "kangaroo killing field," a completely destroyed habitat.  Yet, as Paul Krugman wrote in the Times today, the Australian government refuses to take responsibility.  My proposal is that we start naming natural disasters after those whose activities are putting us and our children in such peril.  We can begin with hurricanes, wildfires, floods, heatwaves and droughts. Maybe blizzards too.  There are enough deniers to go around.  Would the rabbis agree?  Well, if what's spoken in Rome can kill in Damascus, what's legislated in Canberra can kill here.  So, yes.