In this Moment: Ribeye Hammerman? Vaccine Blessings; A Venomous Pinprick; A Hand-y Yarmulka? 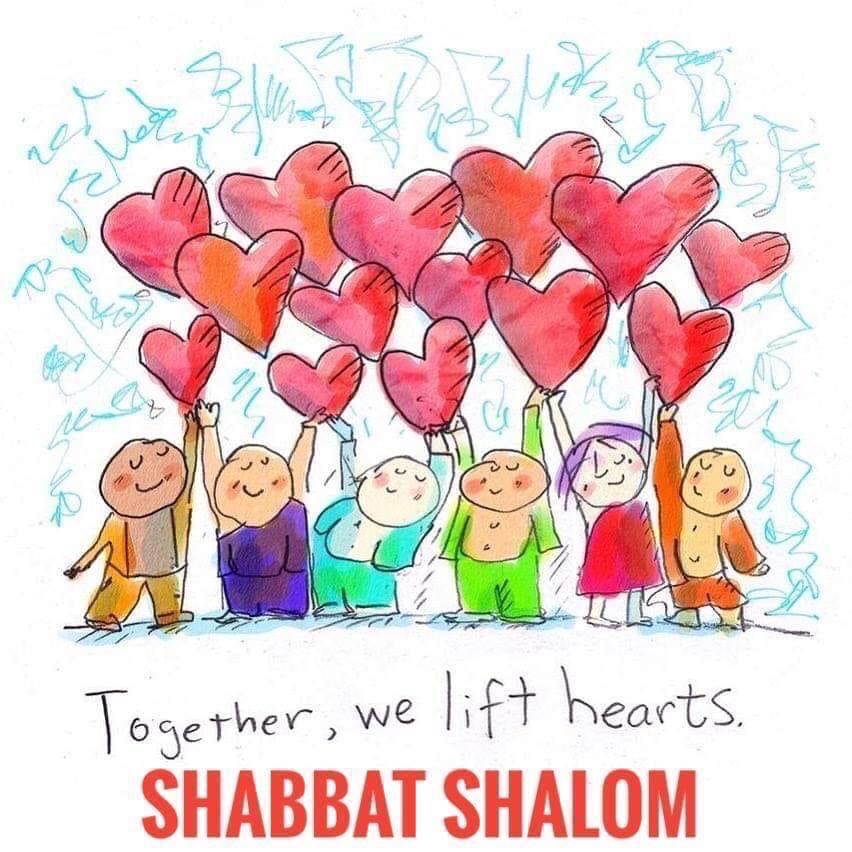 Photos of the week... 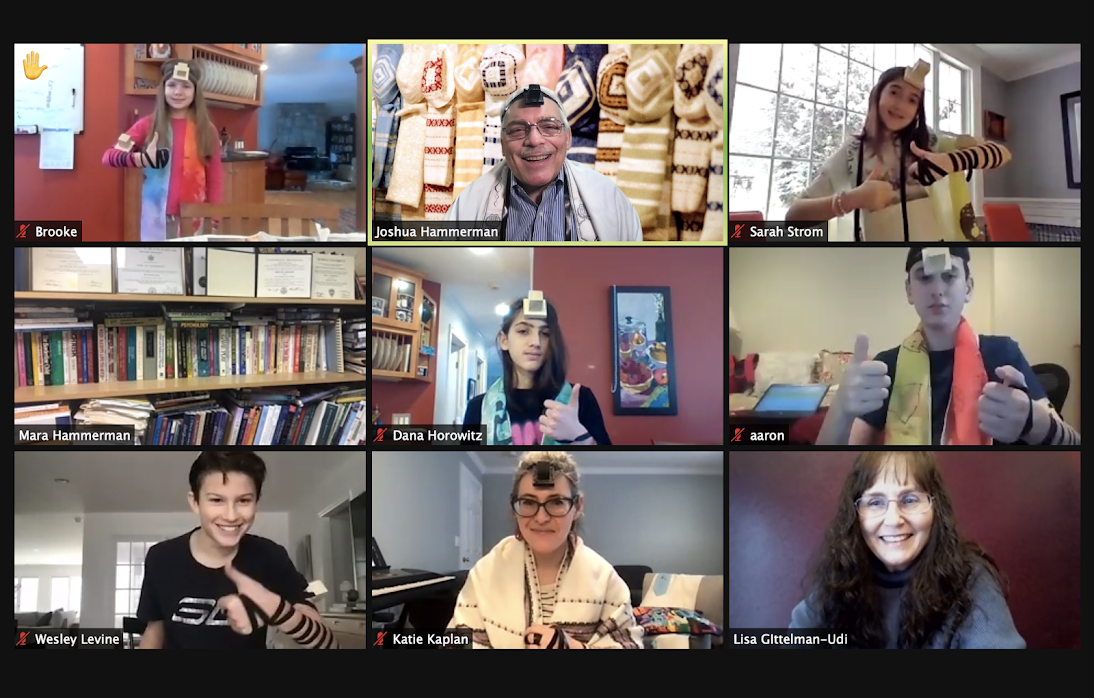 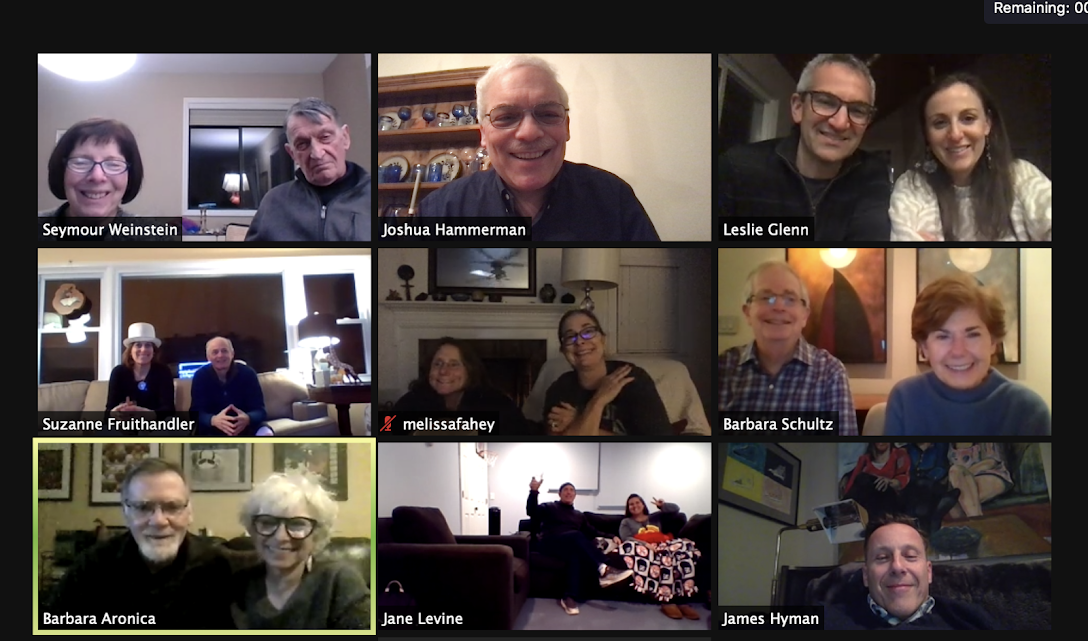 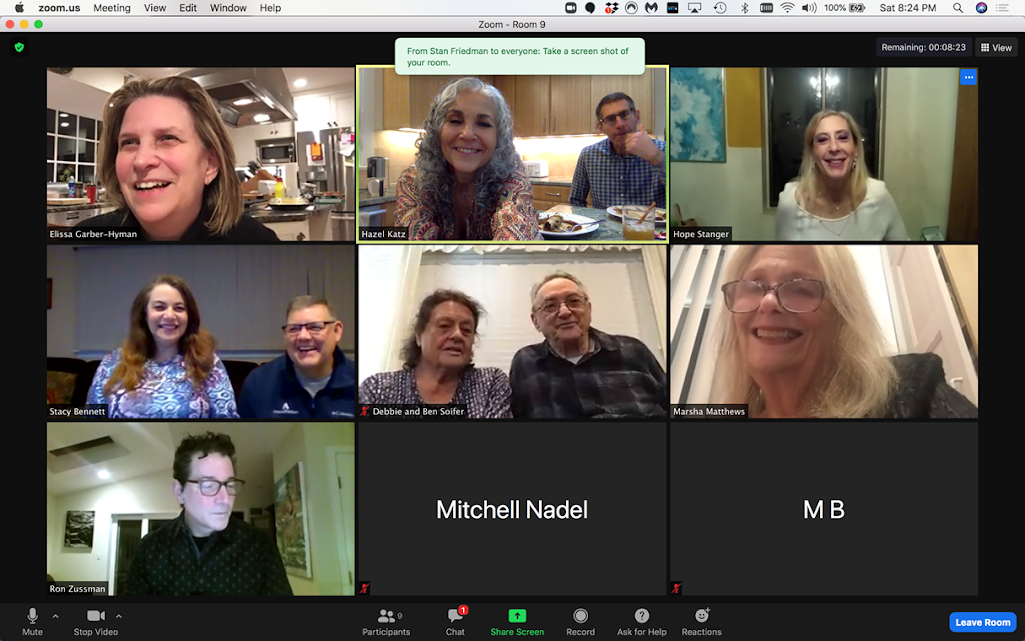 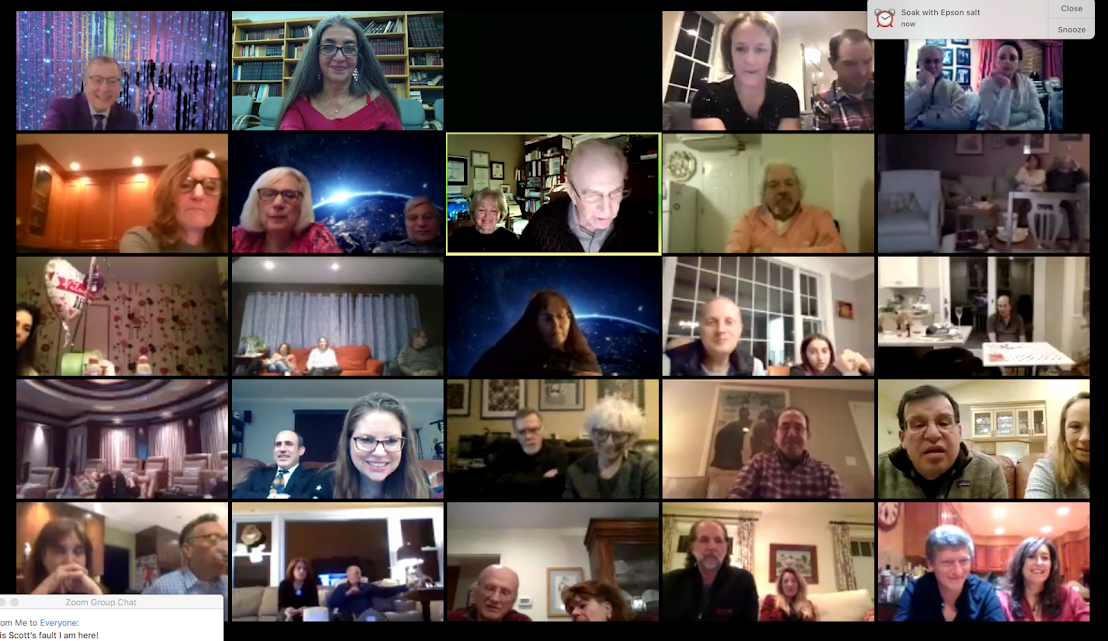 The Hebrew letter Aleph traces its ancient origins to a pictograph of an ox. Well, it looks like an Israeli company named for that letter might just be headed toward putting cattle out of business! Read more about what's at stake - er, steak - here.  For one thing, if Israel is to revolutionize the laws of Kashrut, the meat industry and animal husbandry, is my title now going to become Rib-eye Hammerman? 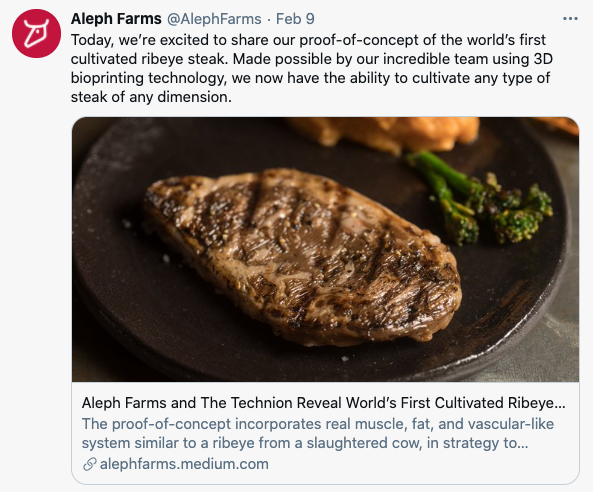 Shabbat Shalom
Evidently someone has been sending out SPAM in my name today. Just another annoyance of the Cyber Era.  We've had to become pretty savvy about such intrusions lately.  Rule of thumb.  If it looks suspicious, check the return email address.
Let me begin with a few quick announcements (and thanks to Sheila Romanowitz for sending that hopeful, uplifting and timely Shabbat art at the top of this email).
- If you know someone who is looking for work, TBE's Suzanne Fruithandler mentioned to me that Garden Homes is looking for Property Management / Customer service office support.  For more information, contact Suzanne directly, at suzanne@gardenhomesmanagement.com.
- This is Black History Month.  See flyer below for our "Shared Legacies" film and program.  In the meantime, take a look at these two backgrounders:
Why Jews Should Celebrate Black History Month (Forward) and  When Black History Month and Torah Come Together (My Jewish Learning)
- Today we enter the happiest month of the Jewish year, Adar.  The Women of the Wall celebrated at the Kotel.. by being doused by coffee.  See the video:
- A question arose this week following the presentation of the former president's  Orthodox defense lawyer David Schoen, who kept covering his head while drinking water: Can a hand be a yarmulke? I was always led to believe that a part of your body can't serve to cover the head.  But I was willing to give him an A for effort, especially given that wearing a yarmulke is more a matter of custom than law - and that I appreciated his decision not to wear one that day.  Read more about the custom of wearing a kippah here, and in particular this note, explaining that one's own hand can not be used. He may have had the tiny plastic bottle cap in his hand (which also may have been to small).  He also could have asked someone else to cover his head with his hand.  Imagine the conversation between David Schoen and, say, Chuck Schumer sitting in the front row.  "Hey Chuck, do you mind putting your hand on top of my head while I take a swig of this water?"  Halacha makes strange bedfellows!
- Many have been receiving Covid vaccinations this week (I had my second on Monday and will speak about it tonight in relation to this week's portion of Mishpatim).  Others have theirs scheduled for upcoming weeks. People have been wondering how to mark this awe-inspiring moment.  Here is a suggested blessing. Here is another  and another, and here's a nice selection, and some from the Rabbinical Assembly and here's a full halachic discussion of the matter from Orthodox sources.  This is undoubtedly the most blessed event since the birth of Moses.  But if you want to pick just one to clip and save, this one below (actually two, including the Shehechianu, which is what I said) is clean and simple - short enough so you won't hold up the line! 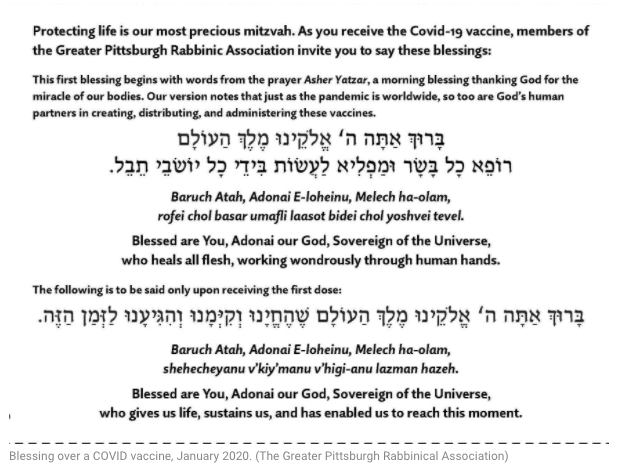 - Purim is on the evening of Feb. 25.  Here are two assignments for you to make our virtual services the best virtual Megilla reading ever!
1) SEND US YOUR VINTAGE PURIM PICS!!!  (I've also got lots). Show yourselves and your kids in their favorite all-time Purim costumes - send directly to me (rib-eye@tbe.org). I mean rabbi@tbe.org.
2) Come in virtual (or real) costumes yourselves, using Zoom filters, like the Texas cat lawyer filter video that went viral this week (and gave me the best laugh I've had in a year).
- Stamford Interfaith Refugee Resettlement (SIRS) sends along this important announcement:
At this time, SIRS is pleased to let you know that we are beginning the process of applying to Integrated Refugee and Immigrant Services (IRIS) for a third family to resettle in Stamford in 2021.  Many volunteers are needed for the various teams involved both before and/or after their arrival.
Assisting in the resettlement of refugees is rewarding and interesting, and we hope you will find this is the right time to be part of this process.
On February 17, at 6:30 PM, we will have a virtual Community meeting as we begin this new journey.
At this meeting we will also share with you what SIRS has done over these last four years; the status of refugees in the world today; and the changes this year which should bring a significant increase in refugees admitted to Connecticut through IRIS.
We invite you to attend this virtual meeting.  Please email one of us if you can attend, so we can send you the Zoom link for the February 17th meeting'.
We hope you will join in this journey.
Peace,
Jean Meyer  (jcc.meyer@hotmail.com)
Amy Ewing  (amyofct@aol.com)
Co-Chairs of Stamford Interfaith Refugee Settlement (SIRS)
Last Week's Venomous Pinprick
By now most of you are aware that our services were Zoom bombed last weekend.  The intruders were "kind" enough to wait until the end of our service to desecrate our sacred space.  The fact that the space was virtual did nothing to diminish the sense of violation that we felt, combined with anger and despair.  It was, on a smaller scale, what the whole nation experienced with the desecration of the Capitol last month, and re-experienced so vividly in the trial this week.  It is what Jews have felt whenever sacred spaces have been violated, from ancient times until today...with one big difference: We were never in any real danger.
Looking back - and we did a lot of postmortems this week - I'm proud of so many aspects of our response, including the fact that people turned up at services in large numbers every day this week, and hopefully will in even greater numbers this Shabbat.
The fact that we did not succumb to fear showed that we recognized the low level of the threat and did not overreact.
It is true that even when the threat was far greater, like after the massacre in Pittsburgh, 400 people gathered in our sanctuary the following Friday night.  In that case we overcame the fear of real danger. In this case, we were stung for a moment, then turned around and realized that this act of intended intimidation was was in fact not an existential punch to our gut, but rather a pathetic pinprick by a couple of weak, gutless juveniles (and in saying this I must apologize to the many courageous juveniles I know - and I am not necessarily referring to chronological age).
As annoying and reprehensible as this act of hate was, it was also cowardly, because the perpetrators could fall back their on online anonymity.  But we recognized their weakness.  They thought they were intimidating us, but it was clear that night and over subsequent days that they did not. We had every right to be shocked and upset, but ultimately, we saw it for the fraud that it was.  I do not minimize the impact on those who are still shaking over what happened.  I'm just reminding you that the only thing we have to fear is the shadow of fear itself, our own muscle memory fear from our tragic history.  Last weekend we traversed through the valley of the shadow of death.  Psalm 23 teaches us that we have to overcome our fear of shadows, and we can do that with faith.
We were angry - I know I was, and part of me wishes I had threatened the intruders with my newly installed "Jewish Space Laser" as a way of mocking their Q-clouded ignorance.  But as I did say last week in an instant response to their stupid, hateful intrusion, this was the act of a desperate group that has found themselves on the losing side of a long-term battle against hate. The battle is far from over; anti-Semitism and racism were emboldened by January 6 and what led to it, but while we have much reason for engagement, we have no reason to fear.
They can't hurt us. And we have our knee on racism's neck.
Compare the hateful words uttered by a couple of pathetic pranksters posted on our Zoom windows last week to what this family saw from their real window in Germany on Hanukkah, 1932. 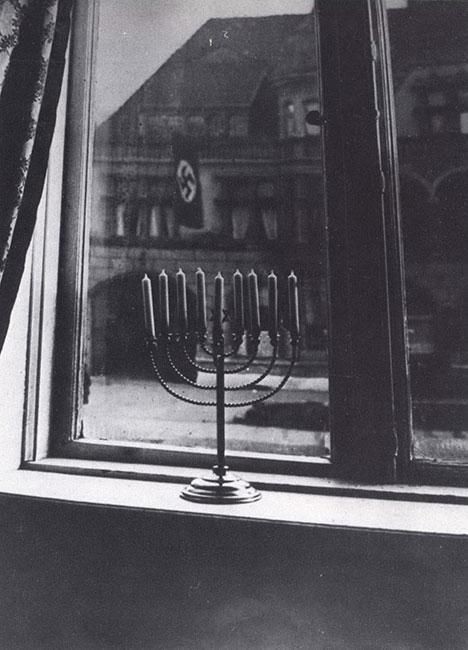 Or to this anti-Semitic flyer posted on a German train this week, blaming Jews for the plague. Gee, couldn't they at least be a little more original? We've been blamed for plagues since the Middle Ages. 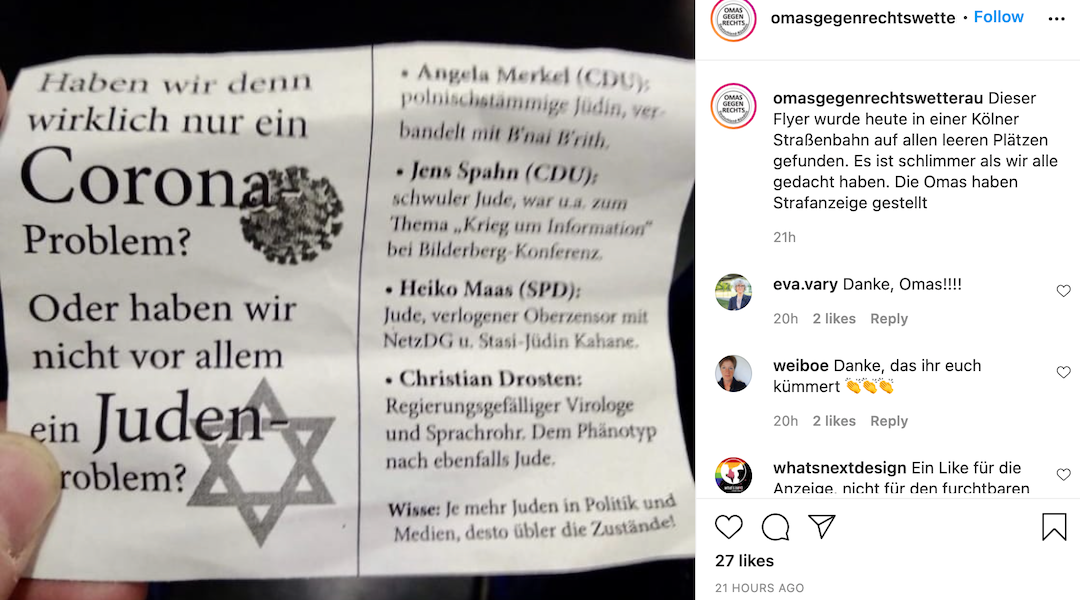 The response on that Hanukkah in 1932 was to shine the light of their menorah, right back at ya.  And they were not afraid, even though the enemy literally knew where they lived.  If they were not afraid, neither should we be.
It is noteworthy that that assertive, courageous response occurred before Hitler manipulated an election to ascend to power, burning down the Reichstag and gutting German democracy along the way.  By the mid '30s, such courageous responses to hate were few and far between.  But on my personal fascist-ometer, I reckon that we are closer to 1932 than 1935 right now, and pointing in the right direction.
We should never underestimate the pure venom in the ideology of White Supremacy that was conveyed in last week's Zoom intrusion. It has not been this empowered and enabled since the Klan marched down those same DC streets a century ago.  But let us not wear the cloak of victimhood, as if to compare our suffering to the victims of Pittsburgh, Charlottesville, Selma and yes, now we can add the Capitol that list.  What for us was an annoying reminder was for them life-threatening.  It is that ideology whose life must be ended.
Last week's attack only highlights the importance of what we are doing as a congregation. Our efforts to combat hate with love throughout the community has intensified  - our spectacular paddle raise last weekend to help alleviate food insecurity is only the latest example.  And next week, on Feb 21 (see flyer on the bottom), we are partnering with local Jewish and Black organizations to watch and discuss the film "Shared Legacies," which if you haven't seen it yet, you must - follow the instructions on the flyer to access it and then join us for the panel discussion.
This program grew out of the fruitful, prolific and intensifying partnership we've developed with the Union Baptist Church.  Having joined together in events ranging from deep discussions of the roots of racism to cooking classes, we now are completing each other's sentences.  Next month, on March 21, we will partner on an interfaith Freedom Seder.  Mark your calendars for that one!
Ultimately that's the best response to last week's futile attempt to violate our sacred virtual space.  We respond to hate with intensified love.  We seek unity where unity is possible, and we never accommodate those whose ultimate goal is the perpetuation of racism, autocracy and alternative facts.
We've put in safeguards, but future attacks are inevitable, at least as long as Big Lies are repeated by those who know better and conspiracy theories like the Jewish Space Laser are allowed to spread.  But I encourage you not to succumb to fear or despair.  If we are intruded upon again, we will eject the intruder and move on, feeling momentarily pained for our lost innocence, but much sadder for our country's.
Shabbat Shalom!
Rabbi Joshua Hammerman 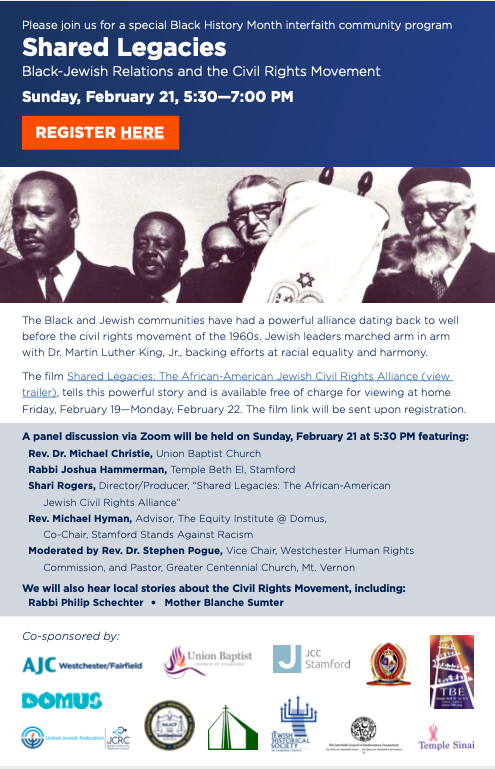