In this Moment: Super Bowl and Jewish Pirates; Jewish Exceptionalism and the Space Laser 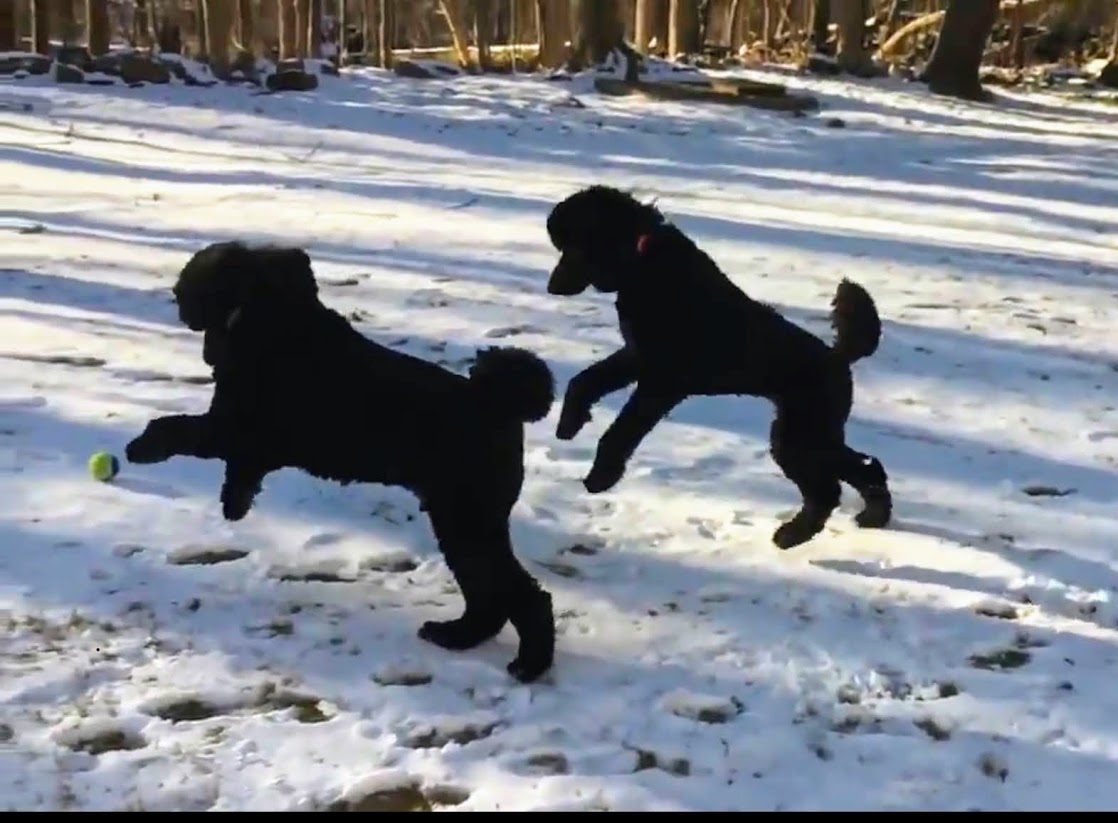 It's a fumble!
Fear itself...
I don't know about you, but this week I'm in awe of the courage of Aleksei Navalny. Read the text of his courtroom speech and excerpts from his note from jail.  He said: "This is how it works: Imprison one person to frighten millions." And then those millions become prisoners too - prisoners of their own fear.  The Hebrew word "Yireh" means both "fear" and "to see." Once our eyes are opened to the consequences of our fear, we are able to overcome it.  For Russians today, just as for Israel during the Exodus, the consequence of paralysis was, and is, imprisonment.  In America, the consequences of fear are equally perilous.
Looking for an uplifting read? Read this story about a Jew who left his inheritance to a French town that protected him during the Holocaust. (Thank you to Donna Wolff for sharing).  And check out this Holocaust Denial Report Card put out last week by the ADL, measuring how social media platforms respond to the hatred that continues to proliferate online.  I'm happy to say that the streaming platform Twitch is at the head of the class - happy because that's where my son Ethan works, which gives me an opportunity to wish him a happy 30th (yes, 30th!) birthday on Sunday. 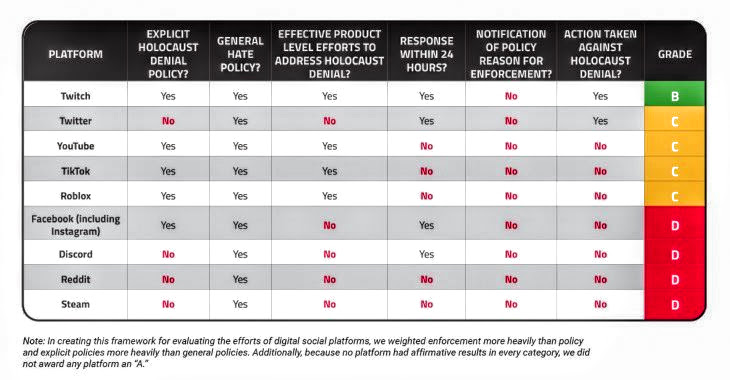 Facebook - you've got some work to do!
Here's the thing.  Hate doesn't just happen; it's allowed to happen. And when it does happen, rapid response is essential.  Twitch is both strategically proactive and effectively reactive.  Facebook is neither.
Of course, Holocaust denial is not the only crazy conspiracy out there that targets Jews.  Now we've got... 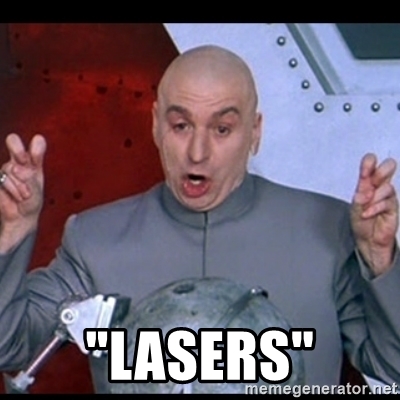 Jewish Exceptionalism and the Space Laser
Jews are good.  One might even say we're exceptional.  How good are we? According to some conspiracy theorists, at least one of whom serves in the U.S. Congress, good enough to build a space laser capable of igniting forest fires in California.
How good are we? We can act, write and direct movies with the best of them! (Win that Golden Globe, Shira Haas of "UnOrthodox!)
And we can govern. Last week's Big Kvell was that President Biden's cabinet boasted a "minyan of Jews."
How good are we?  We can do wonders to fight diseases. Israelis lead the world in Covid vaccinations per capita.
All that, plus we've got one-fifth of all Nobel laureates (you can see the whole list here).
So we've got a lot to be proud of, Jewishly speaking.
But then I heard Donniel Hartman, a renowned Jewish thinker, say that what makes Jews exceptional has nothing to do with either accomplishments or acumen.
He states:
With Abraham and Sarah, we are not merely encumbered by a family connection. We begin to be encumbered to a particular story, and past. Over the next fifty chapters in the Bible, we are taught and told our story. It is neither a beautiful story, nor one which is morally uplifting. There is no attempt to beautify the troubling stories. By leaving it untouched our tradition is teaching an essential lesson of Jewish encumberedness. The beauty of the story lies simply in the fact that it is ours.
I discussed this surprising point at this week's class on Jewish peoplehood (see the video), "Together and Apart," and I contrasted it with some of the nice things said about us by some pretty famous people.  Just pick one or two of the quotes below.  No need to get a swelled head. 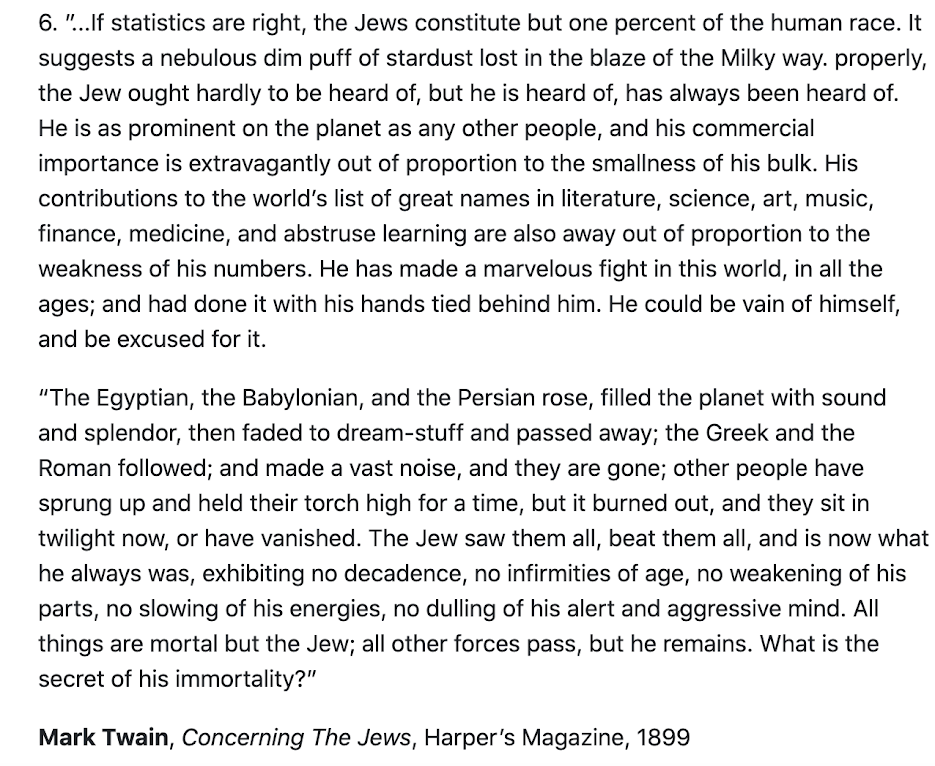 So what is it?  Is the Bible the Greatest Story Ever Told, the Best Book Ever for the Best People Ever, or is it all just hype?  Is the myth of Jewish exceptionalism in fact just more fodder for anti-Semites who fear our diabolical superpowers, when in fact we are just unassuming bunch of ex-slaves trying to do our humble best to make the world a little better?
This is no small matter at a time when the conspiracy theorists are winning the day, seizing every news cycle even as we discredit and mock them.
My personal favorite parody response to this Q-Anon garbage came from the New Yorker:

And there's this, for Trekkies: 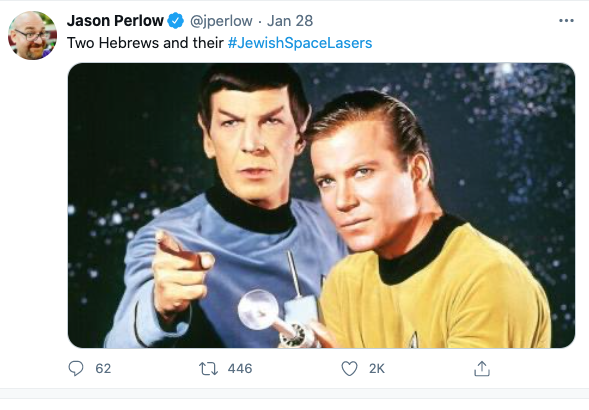 And there's much more...
But we can take little comfort in how absurd these anti-Semitic claims are.  It seems that people will believe just about anything as long as it is repeated enough times.
To quote Hannah Arendt:
"If everybody always lies to you, the consequence is not that you believe the lies, but rather that nobody believes anything any longer... And a people that no longer can believe anything cannot make up its mind. It is deprived not only of its capacity to act but also of its capacity to think and to judge. And with such a people you can then do what you please."
That's precisely the autocrat's playbook. I don't know if there is a sucker born every minute, but suckers can be mass produced with every tweet.  And that is why anti-Semitism has spread like - um - wildfire, at a time when anyone with a brain should know that Jewish financiers don't aim lasers at California forests.
So maybe we shouldn't be so dependent on Jewish exceptionalism in order to boost our self image.  Maybe it's time to stop patting ourselves on the back and understand that Jewish connection can be fostered in more authentic (and less obnoxious) ways.
When we open the Passover Haggadah, the story always begins in degradation with the darkness of slavery and the bread of affliction, and while the ending is happier, there is no "happily ever after." The Seder never brings us to the Promised Land. Jerusalem is there, on the horizon, but for "next year."  What's more, there is no Odysseus or Hercules to shepherd us over the finish line, all we've got is a little goat that daddy bought, and he stirs up a dystopian cataclysm.  Moses's role is downplayed in the Passover story.  Jewish heroism is consistently modulated in our texts, while human failings and moral complexities are emphasized.  Even stories that downplay God's role, like the Book of Esther, still feature flawed heroes. For all their courage, Esther and Mordechai come off looking like a couple of Bridgertons amidst the palace hijinks.
David, arguably our greatest hero, is also one of history's most tragic figures and callous sinners.
We have no  super powers; we are in fact models of frailty.  But if we are are superhuman in any respect, it is that we are super at being human, or at least at trying to be. We elevate the experience of human resilience to an art form.
But despite our frailties, or perhaps because of them, our stories are still special to us and they would be even if we didn't find moral sustenance in their content; just as our more personal family tales are special to us not because our parents and grandparents were the most moral people ever, but simply because they are ours.  We are connected to our ancestors and the stories they've left behind.  We are, in Hartman's words, (based on the ideas of Michael Sandel) encumbered by them.
We gain strength from that grounding, the rootedness that gives us the confidence to reach out beyond our boundaries to help others.  That encumberedness is buttressed by the responsibilities of covenant, a covenant that was sealed at Sinai (the subject of this week's Torah portion of Yitro).
So let's not get caught up in all the banter of our supposed greatness.  We can take pride in Shira Haas because she is mishpocha.  Nothing wrong with that. But not because she is an example of some innate acting talent that Jews have cultivated.  That claim is a conspiracy theory waiting to happen: "Those shape-shifting Jews."
If our goal is to be exceptional, it is to be exceptionally human, always striving to become better.  Nothing more.  Nothing less.
Shabbat Shalom!
Rabbi Joshua Hammerman
Posted by Joshua Hammerman