The Shechina Has Left the Building! 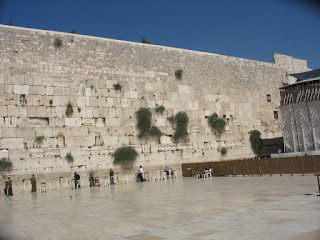 When I first visited the Kotel, as a 16 year old on a teen tour, it was the evening of Tisha B'Av. Over 100,000 Jews, people of all backgrounds, clustered in small circles to recite Lamentations. My group sat on a perch looking down at this mass of Jewish humanity. We prayed on our own but felt at one with them all.

After we finished I approached closer to the Wall and saw a white dove about halfway up, glowing in the light, perched on a nest of moss. I quivered with recognition of the Shechina, God's most manifest and loving presence, sent to that very spot to weep with Her people among the ruins. For centuries, that legend and that weeping bound motionless stones to a yearning nation.

But things have changed since the summer of '73.

The controversy over who "owns" the Western Wall continues to rage, following last week's new incident involving the harassment of women seeking to pray there. The Women of the Wall have met with increasingly hostile treatment lately, including interrogation and arrest by the police. Last week's incident was "mild" by comparison. They were "only" called Nazis by the jeering fundamentalists.

In a statement released Monday, Rabbi Shmuel Rabinowitz, rabbi of the Western Wall, condemned the women's group, saying, "As a place dear to the heart of every Jew, every movement, and every world view, the Western Wall must remain a place that unifies rather than separates the people of Israel. The different movements need to understand the complexity and sensitivity of the Western Wall, and leave it outside the borders of conflict."

I agree that the Kotel should be a place of unity for the Jewish people. That was, after all, one of the two main functions of the sanctuary built in the Wilderness, the mishkan, described in great detail over the second half of the book of Exodus. The other function was to be a symbol of God's continued presence among the Israelites. The Temple, whose design was said to be based on the Mishkan's, also fulfilled both purposes. The Kotel, as a remnant of the second Temple, and should fulfill the same two roles.

Twenty years ago, I had no problem bringing groups of congregants to the middle of the plaza, men and women together, for Friday evening services, after which we would approach the Wall as individuals to share in the euphoric cacophony of singing Yeshiva students, tourists, new immigrant, worn pilgrims and curious seekers and long-lost friends from the States. But such is not the case today.

As a location of unity, the Kotel is failing miserably, since it represents only the interests of those who maintain an ultra-Orthodox posture. As Rabbi Julie Schonfeld,Executive Vice President of the Rabbinical Assembly, writes,

"Discrimination and harassment -whether sexual, racial, or religious--are demeaning and dehumanizing. We fool ourselves if we think we can stand by while Jews in the Jewish state utilize government agencies to harass and oppress other Jews based on religious practice. The soul of the state of Israel and of the Jewish people is at stake."

In a brilliant expose, Rabbi David Golinkin documents conclusively that throughout Jewish history, the Western Wall never was intended to be a synagogue. Just as with the Mishkan and Temples before it, the Kotel was never the place for collective prayer, but rather for individual expressions of gratitude or concern. In bringing their sacrifices in ancient times, Jews left a little of themselves in that sacred spot, a place of personal selfless giving, as expressed in the Tale of the Two Brothers, a story that has informed our perceptions of that sacred space - of all sacred space - for many generations. And today, when we leave notes in the cracks in the Kotel, we are performing essentially the same act - leaving a little of ourselves, our prayers, behind.

Golinkin demonstrates that even when the lower plaza came under the control of the rabbinate in November of 1967, and in effect became a synagogue, the upper plaza explicitly did not. But now we are seeing a creeping annexation of even that upper plaza by the rabbinate. One solution proposed would be for non-Orthodox groups to pray at the area of Robinson's Arch, which is not controlled by the religious authorities and is a lovely, uncongested and equally historic spot. But that spot currently cannot accommodate the large number of groups seeking to pray there. A column in the LA Jewish Journal, "Take Back the Kotel Part II: Open Up Robinson's Arch," suggests that more funding be devoted toward relaxing the restrictions in that area.

But others say that the Arch, lovely as it is, is not the part of the Kotel that Jews have known and prayed at for centuries. And "separate but not-so-equal" does not fulfill the original vision that this be a place where all Jews can celebrate their unity, in the same place, together.

The best solution would be for Jews everywhere to pressure the Knesset to take that plaza back on behalf of the Jewish people.

Given the unlikelihood of that happening, there is one more alternative - to seek God's presence elsewhere in Israel. As I wrote several years back, while the Kotel has become a place not of harmony but of spiritless spiteful strife, the rest of Israel beckons.

In ancient times, the Kotel, the Temple's outer, retaining wall, was the place where all the people could gather, from the largest to the small, sheep and pigeons in hand, before arriving at the inner courtyards where degrees of separation set in. The Kotel scene was a festival of earthy democracy for the plain folk: the sweaty Herodian-era laborers who moved enormous slabs of rock, the late-Roman period artisan who scribbled joyous graffiti from Isaiah, the dying whispers of medieval pilgrims having reached their long-sought final destination, the teary paratroopers in '67, the final breath of my grandmother who never got there.

At the Wall, the Jewish body beat with one heart.

Now the stones have lost their heart and strangers beware.

The Shechina has left the building.

And where has She gone?

Why to the Mall, of course, where the people of Israel share a common language and meet on an equal canvas, bearing first fruits and exchanging them for a sip of coffee and a snippet of intimate conversation. Everyone is there, sharing small talk at Burger King on Ben Yehuda St. in Jerusalem or folk dancing at Ben and Jerry's on Tel Aviv's beach front.

If this all reeks of American cultural imperialism, I beg to differ. While the Western Wall has become bad Disney, the Mall has made Burger King a touchstone to the Sacred. A kosher Kentucky Fried Chicken isn't about the Americanization of Israel, it's about the Judaization of Americanism -- at long last Colonel Sanders has discovered our secret recipe for the sanctification of life.

At the Jerusalem's Malcha Mall there is equal access from every gate. Priests, Levites, women, the disabled, tourists: all are treated in like manner. A mall with honest shop owners, separate meat and dairy food courts and even a synagogue, is a mall that conveys the best of our value system to the next generation. Amidst the Hebrew Coca Cola bottles and Movie Star magazines there is a level of holiness, because they are bringing my children and their Israeli cousins together in a Jewish state speaking a Jewish language.

The Mall, democratic, serendipitous, wide-eyed, infused with Jewish values, just a little bit dirty and a whole lot Israeli; has become a place of pilgrimage and unity for the Jewish people -- just what the Temple's outer courtyard used to be. The Shechina now sits on a nest atop Burgers Bar, weeping no longer, for Her people have returned.

But alas, how lonely sit the ancient stones of the Kotel. I weep for them
Posted by Joshua Hammerman

It seems that the real story here has gone by the wayside. I live in the Jerusalem area and am acquainted with at least one member of the Women Of The Wall and from my contact(s) I have learned that the group is largely irreligious in the conventional sense but their dedication and attachment to feminism as doctrine is first and foremost. I have also seen their behavior at the Wall on one Rosh Hodesh. For anyone who actually witnesses their "worship" at the Wall it’s clear that the Women's behavior is intentionally disruptive and the negative reaction of a minority of others who go to the Wall to pray is perhaps not 100% justified but it is understandable. Those Women go to the Wall with the primary purpose to disrupt and make a scene, not because they're interested in worship, but intend to make a loud public feminist statement. No other religious venue around the world in any other religion would permit such behavior. If a group of feminists would perform that way in the Sistine Chapel they'd be ejected immediately and never permitted to enter again, and the Italian Supreme Court would not bother to hear their complaints. The Israeli Supreme Court is very left-wing and even they recognized that the Women are disruptive and so the Court gave them a place to pray at the Wall (Robinson's Arch is a part of the Western Wall) where they could worship in their own style if they really wanted to but it was far enough out of the way so they could sing to their heart's content not to disrupt. The Women Of The Wall are upset at that ruling because the Supreme Court took them at their word when they said they want to pray at the Wall and gave them a place there – but one that is out of the way and largely out of earshot of the men. If they really wanted to go to the Wall just to pray in their own way that should satisfy them. Yet the Women are still upset because the whole point of their prayer service is intended to be an in-your-face affair aimed at the orthodox establishment. The Supreme Court ruling prevents them from parading their feminist agenda in full view, and the fact that they are not pleased shows that this is the whole point of their exercise.