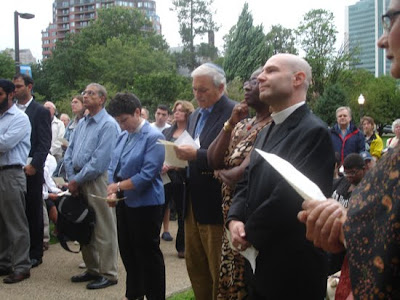 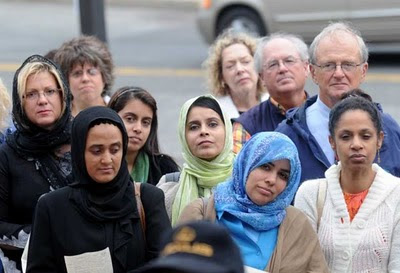 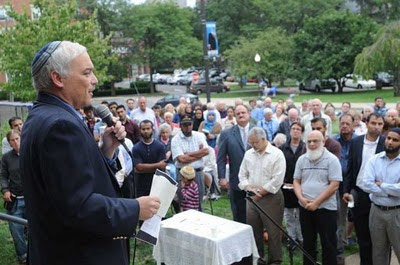 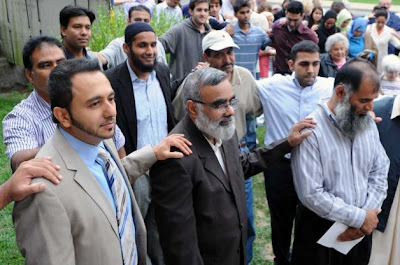 See other coverage at the Greenwich Time blog

Members of all faiths gather in support of Islam
Kate King, Staff Writer
STAMFORD -- Dozens of people from all religious backgrounds gathered outside the First Congregational Church of Stamford Tuesday night to express support for the local Muslim community.

"I don't like, as a religious person, as a person of faith, seeing a religion condemned," said the event's organizer, Rev. Kate Heichler, president of the InterFaith Council of Southwestern Connecticut. "In the America I grew up in, when someone's getting picked on you go stand with them."

Heichler planned the vigil in reaction to recent instances of "Muslim bashing," which she said are occurring on national and local levels. The controversy over "Park51," an Islamic Community Center slated for construction two blocks from ground zero, and an Aug. 6 demonstration by members of the Christian group Operation Save America outside a Bridgeport mosque were two incidents that inspired Tuesday's vigil, Heichler said.

Mongi Dhaouadi, a representative from the Council on American Islamic Relations, drove down from Hartford to attend the event. He said he had been inside the Bridgeport mosque when Operation Save America members yelled that Muslims should give up the Koran for a month. The remark, made on the first night of the holy month of Ramadan, was "very hurtful," Dhaouadi said.

"We need to use this occasion to turn things around," he said. "Let us walk away tonight with a commitment. We have so much in common. There are so many problems out there and we can face them all together."

Religious leaders from the Christian, Jewish and Islamic faiths read prayers in English, Hebrew and Arabic in front of the crowd. Naveed Khan, a representative from the Stamford Islamic Center, said that acts of hatred and bigotry risk isolating Muslims from their own communities.
"Events such as this today help bridge the gap of our misunderstood religion," Khan said. "We ask for your support in any times of darkness we may have. And we will, in turn, be in lockstep with our community."

Several elected officials attended the vigil, including state Rep. William Tong, D-Stamford, and state Rep. Gary Holder-Winfield, D-New Haven, who drove down to Stamford from New Haven for the demonstration.

Suhail Kadri, a Muslim from Norwalk, said he was "elated" with the outcome of the vigil.
Kadri said he has heard "pointed remarks against Islam," which he attributes to a lack of understanding regarding the religion.

"And that's where the most hurtful comments come from," he said. "Ignorance."
"When I came down here this evening, it meant to love isn't to just sit in New Haven and say, 'well that's a good thing they're doing in Stamford,' " he said.

"I was so upset about what I heard in the news," Stokes said. "I like that tonight there were so many different people, ages and races and that we could all come together and pray together."
Jackie Carlsen, who attended the event with her pug Olga, said she was also upset about what she has been hearing about Islam in the media.

"I'm becoming increasingly disturbed with the mood in the country," Carlsen, 53, said. "We are supposed to tolerate all religions. You can't just pick and choose."

"I was happy with the fact that so many individuals acknowledged that one of the purposes the country was founded on was freedom of religion," he said.

STAMFORD -- In the wake of recent protests against Muslim worshippers by fanatical Christians in Bridgeport, an interfaith prayer vigil drew together more than 200 religiously diverse people on Tuesday evening outside First Congregational Church to urge tolerance of all faiths.

Those protests had apparently been inspired by the proposed construction of a mosque at Ground Zero in lower Manhattan -- the site of the terrorist attacks of Sept. 11, 2001.

And while Sept. 11 was only anecdotally mentioned on Tuesday, it was clear that the Aug. 6 protest at Masjid An-Noor mosque -- in which protesters yelled "Islam is a lie" and called children leaving the mosque "murderers" -- was the impetus for the event organized by the Interfaith Council of Southwestern Connecticut."

"The way we breathe in and breathe out tells us God is our breath," Jackson said. "Thank you for your courage and boldness and love. We are all one, and we experience that oneness. Let the world hear us breathing out with one breath."

Rev. Kate Heichler, president of the Interfaith Council, said we all must defend someone -- in this case Muslims - who become the subject of bullying."I don't like to see a whole religion condemned," Heichler said. "In America, when someone gets picked on, you stand with them. As a Christian, I know we all value Jesus in different ways. We value him as Lord, and Jesus said love your enemies. We, in America, have very few enemies among our Muslim brothers and sisters. That doesn't mean we can't talk about violence and oppression, but we can do that with conversation."

For Mongi Dhaouadi, executive director of the Council on American Islamic Relations in Connecticut, the vigil was an opportunity to encourage people of all different faiths to find fertile common ground."

We need to use this occasion to turn things around and make something good happen," Dhaouadi said. "We must reach those that we never spoke to before, and sit down and talk. We have so much in common, and there are so many problems we can face together."

State Rep. William Tong, D-147, said a gathering such as Tuesday's was an example of why he decided to raise a family in Stamford."I've been thinking a lot about this situation, and it's moved off of Constitutional and property rights to a question of what's right and what's wrong," Tong said. "A lot of people who have been 'the other' -- not normal, not understood, not welcome -- know how hurtful and wrong (this type of protest) is. A protest like this doesn't represent the best of who we are."

Rabbi Joshua Hammerman of the city's Temple Beth El, read from Psalm 133, which includes the passage "How very good and pleasant it is when kindred live together in unity!"

"This community, this city, is God's house, where we support each other in times of trial and pain," Hammerman said. "We, as Jews, have seen hatred run amok. Instead of fanning the flames of hatred, let us instead fan the flames of love."

Standing on the steps of Stamford's oldest house of worship was not lost on Rev. Ron Sala, minister with the Unitarian Universalist Society of Stamford."We're at the original congregation of Stamford, founded 375 years ago, and I'm grateful that we can gather here today in one purpose," Sala said. "We worship a God of love, a God of life, a God of liberty. Today people from many different religious traditions -- many different flavors of faith -- are gathering to create a more compassionate world. We need to step from ignorance to knowledge, from fear to faith. This gathering will help us to get to know one another better as Americans and as people of faith."
Posted by Joshua Hammerman