The Shoes of Boston 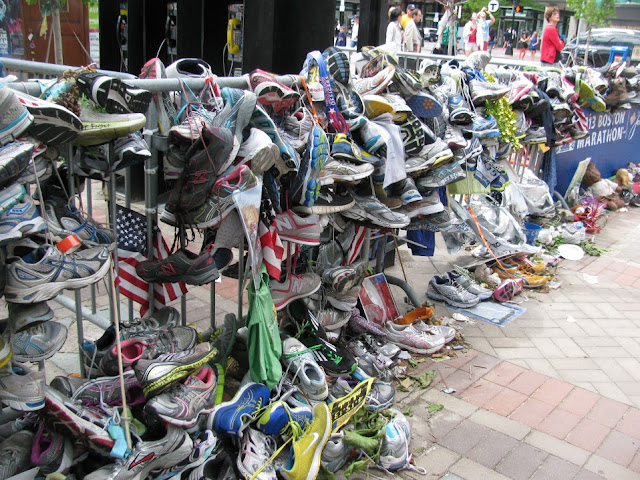 In Boston earlier this week, I decided to stop and pay respects at what has become my home town’s version of Ground Zero, the memorial to the victims of the Boston marathon bombing, at Copley Square. The personal messages and gestures are both beautiful and heartbreaking. So many children have donated teddy bears.  What must it be like for a child to bring his favorite bear and leave it at such a site? There’s some defiance in the signs, but mostly words of love and support, not just for the victims, but for the enture city.  No one talks at the memorial. People stroll, read and reflect, and then stretch out to enjoy a beautiful June day. The people of Boston have become demonstratively friendlier - really - (I know it's hard for New Yorkers to imagine). A young couple stopped in their tracks to help me squeeze into a tight parking spot. And then, when I was tucked in to the space, they simply waved and walked away.

Finally, the shoes. I know the symbolism is different here and comparisons are dangerous, but the last time I saw so many shoes piled up like this was at Majdanek. Granted, those weren't Nikes and they were the shoes of the victims, not running shoes offered up as a symbol of support. Still, it reminds me of the Yiddish poem by Moshe Shulstein that I cited when I returned from the “March of the Living.”

I saw a mountain
Higher than Mt. Blanc
And more Holy that the Mountain of Sinai
On this world this mountain stood.
such a mountain I saw—Jewish shoes in Majdanek….

Hear! Hear the march.
Hear the shuffle of shoes left behind—that which remained.
From small, from large, from each and every one.
Make ways for the rows—for the pairs—For the generations—for the years.
The shoe army—it moves and moves.

We are the shoes, we are the last witnesses.
We are shoes from grandchildren and grandfathers,
From Prague, Paris and Amsterdam,
And because we are only made of stuff and leather
And not of blood and flesh, each one of us avoided the hellfire. We shoes—that used to go strolling in the market
Or with the bride and groom to the chuppah
We shoes from simple Jews, from butchers and carpenters,
From crocheted booties of babies just beginning to walk …

Unceasingly we go. We tramp.
The hangman never had a chance to snatch us into his
Sack of loot—now we go to him.
Let everyone hear the steps which flow as tears.
The steps that measure out the judgment.

And now we have the shoes of Boston.
The shoes of simple runners,
who heard the explosions and kept running,
not away from the blasts but toward them, toward the victims.
People who have proven that the world
has indeed made strides, long, sustained strides, since the Shoah.
The steps still flow as tears.
But the shoe army now does not shuffle in despair.
It sprints in defiance.
It springs toward the light.
It leaps toward love. 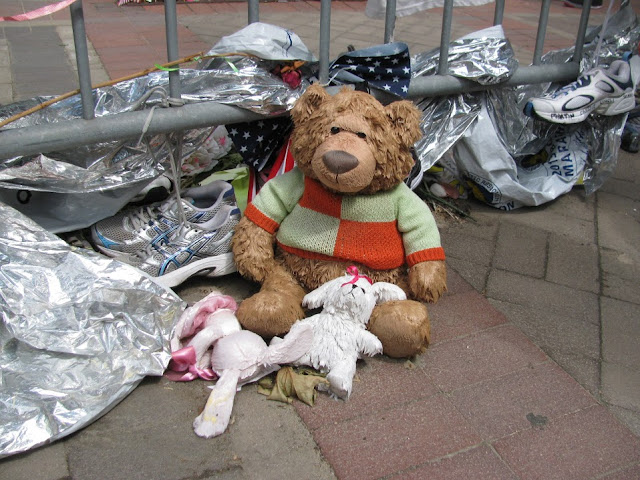 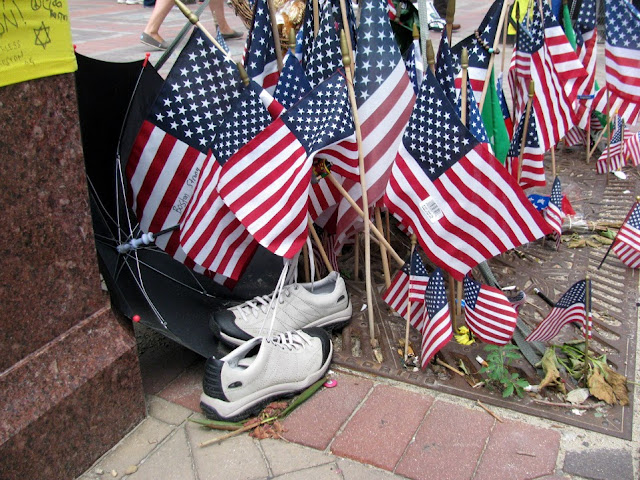 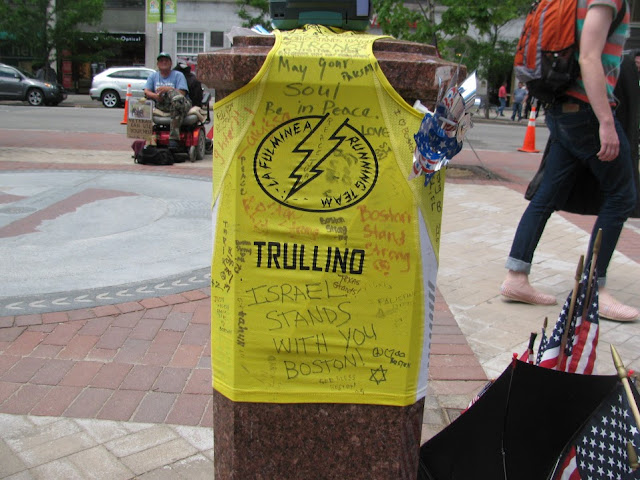 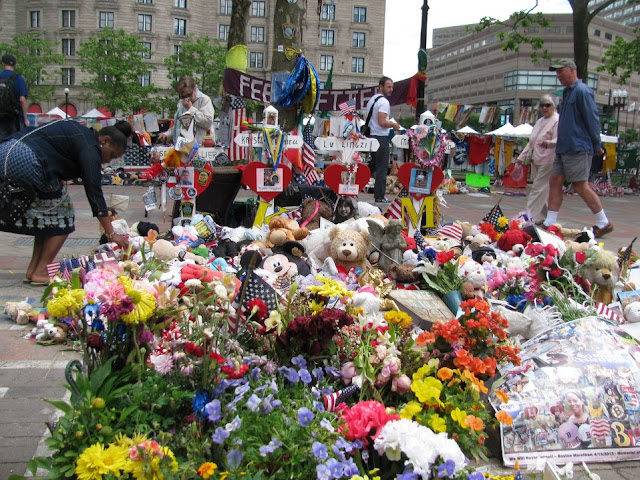 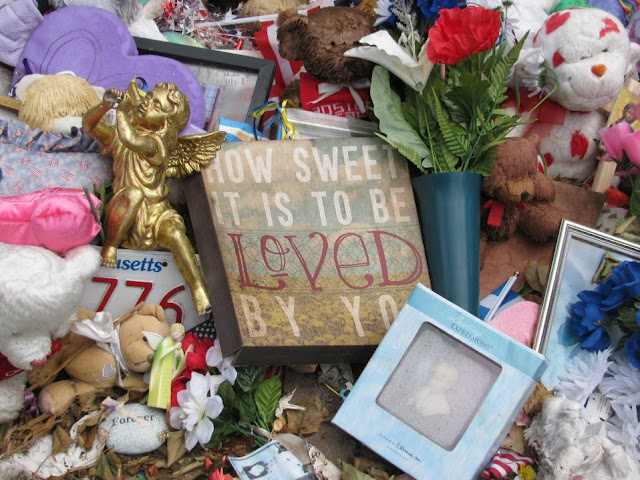 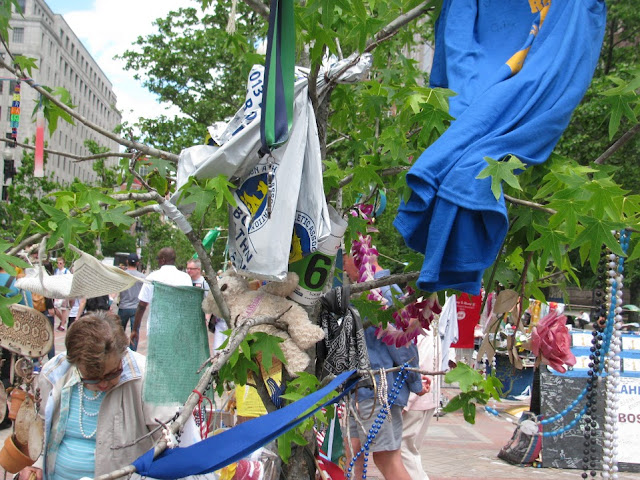 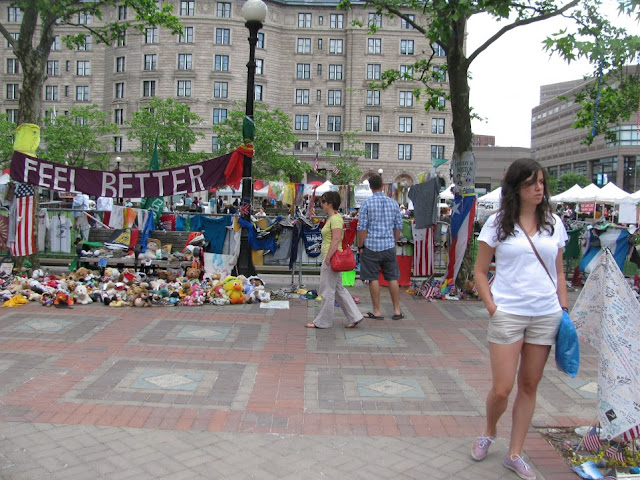 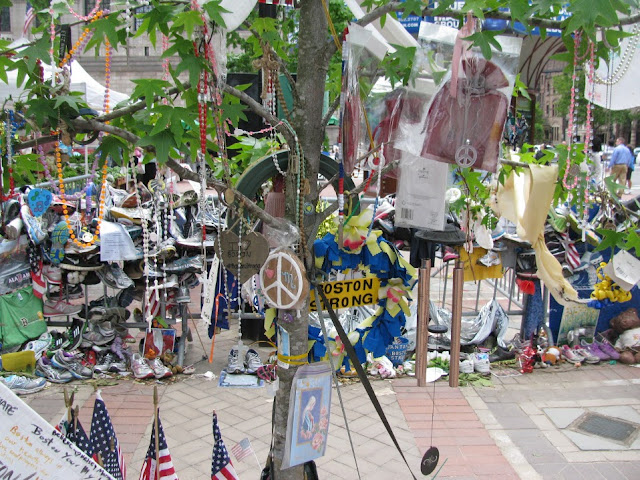 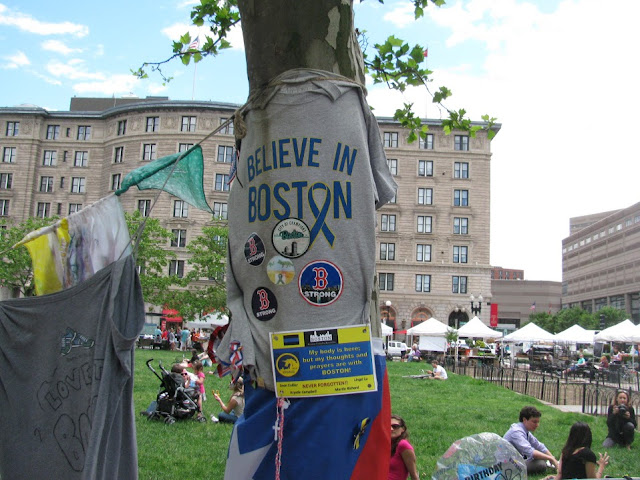 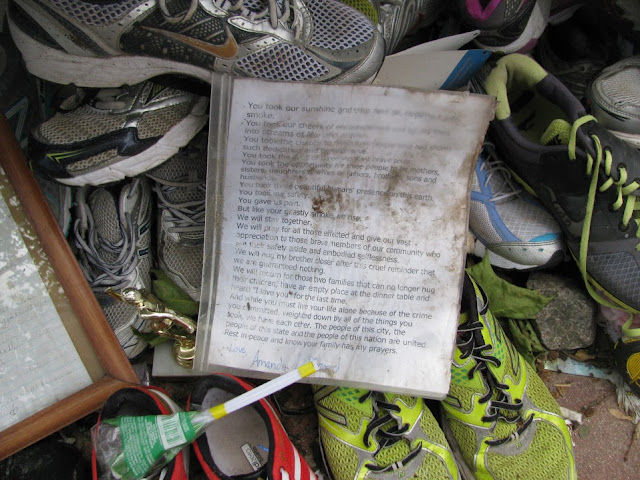 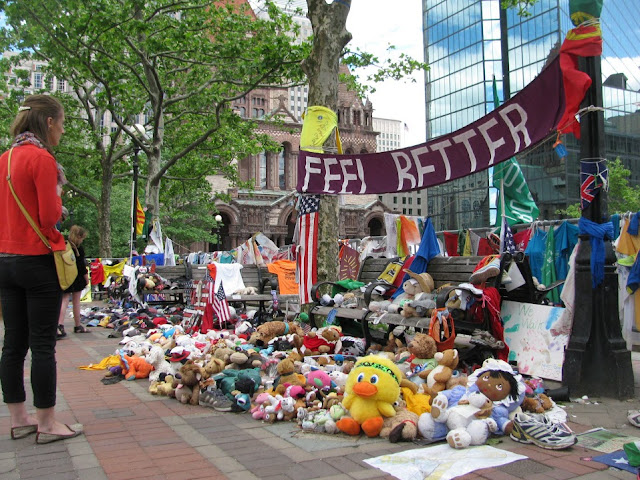 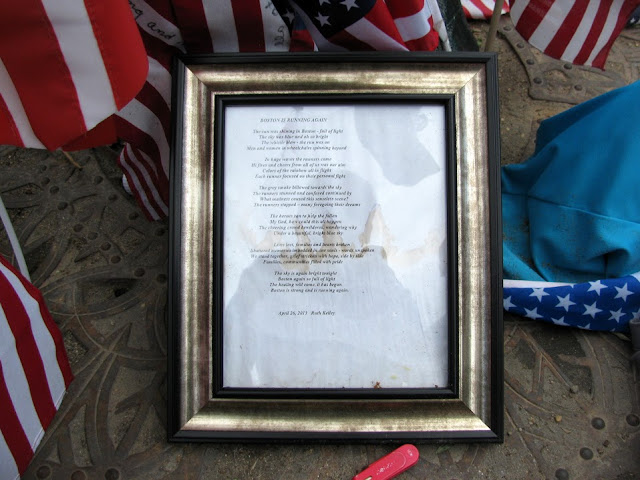 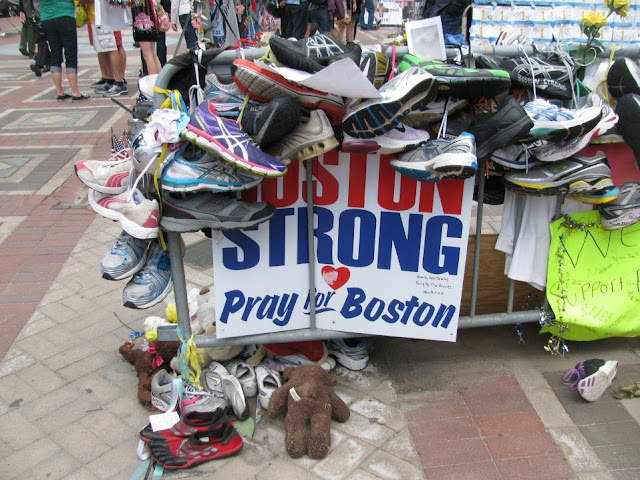 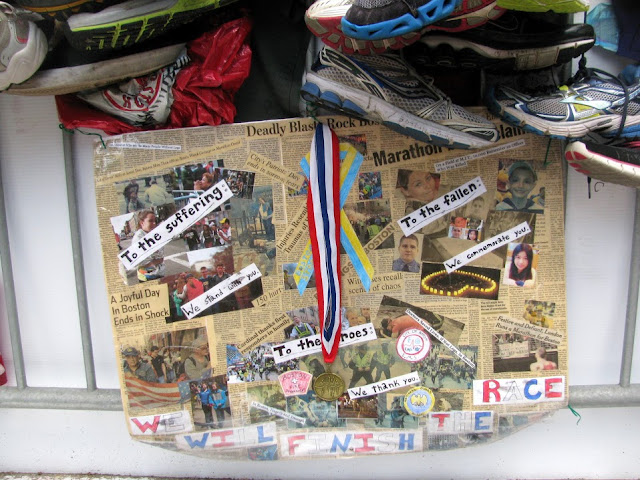 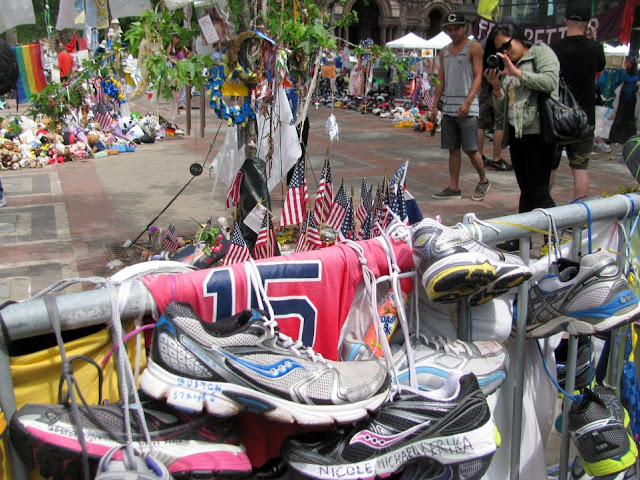 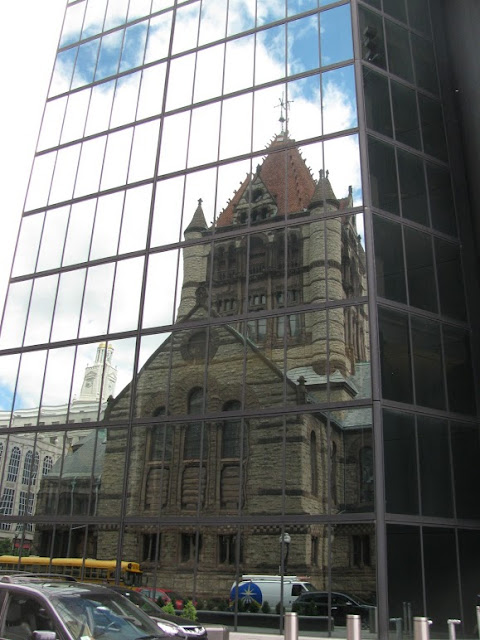 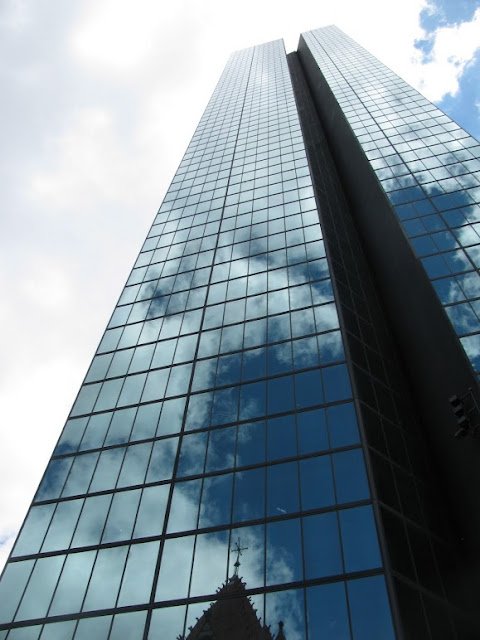 Email ThisBlogThis!Share to TwitterShare to FacebookShare to Pinterest
Labels: boston, Holocaust and Anti-Semitism