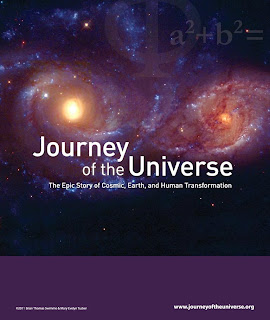 Do we have a Tu B’Shevat treat for you!  On Tuesday January 14 at 7:30, we’ll be showing the film “Journey of the Universe,” a highly acclaimed, Emmy Award winning, epic documentary exploring the human connection to Earth and the cosmos.  Afterwards, a discussion will be led by Teresa Eickel, executive director and co-founder and of the Interreligious Eco-Justice Network.  Terri has been instrumental in advising us in our solar panel project and in sharing our accomplishments with religious institutions across the state and beyond.

The Jewish Arbor Day is really Sustainability Day, the perfect time for us to celebrate TBE’s recent focus on preserving our planet.  Even with our solar panels, CSA and Mitzvah Garden, it remains for us to draw the deeper spiritual connections that motivate us in the sacred work we are doing.  “Journey of the Universe,” while focusing more on science than religion per se, is one of the most exhilarating spiritual films I’ve ever seen.

The film invites viewers to become travelers on a journey that explores the origins of the universe, the emergence of life, and the rise of humanity. Filmed on location on the Greek island of Samos, the birthplace of the mathematician, philosopher and mystic Pythagoras, “Journey of the Universe” weaves together the findings of modern science with cultural traditions of the West, China, Africa, India, and indigenous peoples to explore cosmic evolution as a process of creativity, connection, and interdependence.


What is rare about this film is that the creators have been able to tell the story from many different perspectives in a seamless and coherent way, using them to enhance our understanding, but also our appreciation of what we don’t understand. The story of what we have learned about the universe is our ultimate story, one of extraordinary achievements and wondrous potential.
Posted by Joshua Hammerman