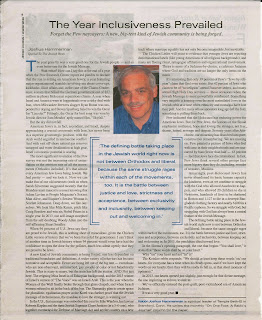 Wait, what? How can I say this at the end of a year when the Pew report led pundits to declare that the sun is setting on American Jewry; a year featuring major organizational scandals involving sex abuse cover-ups, kickbacks, illicit affairs and, in the case of the Holocaust Claims Conference, a scam that bilked the German government out of $57 million?  A year when Israel and America were at loggerheads over a risky deal with Iran, when Ryan Braun was suspended for doping and Steven Spielberg failed to win the Oscar for "Lincoln?"  Fittingly, the Oscar for best song was won by Jewish director Sam Mendes' aptly named film, "Skyfall."

But the sky did not fall.

American Jewry is in fact ascendant, and Israel, despite approaching a crucial crossroads with Iran, has never been in a superior geostrategic position, with the Arab world engulfed in internecine conflict.  And with vast untapped natural gas reserves off shore and water desalination in high gear, Israel's economic potential is soaring.

The most significant revelation of the Pew survey was not the increasing rate of assimilation or the attrition rate of all the movements (Orthodox included).  It's that almost every American Jew loves being Jewish.  We feel pretty - and we look it.  Now we can make fun our old neuroses (such as when Sarah Silverman suggested recently that Brandeis team mascot is a nose), knowing that Adam Levine is People Magazine's Sexiest Man Alive and Esquire's Sexiest Woman is Scarlett Johansson.  Deep down, we like ourselves.  We look like Mila Kunis, pitch like Craig Breslow and win six Nobel Prizes in a single year.  In 2013, the self-doubting Woody Allen morphed into the self-affirming Stuart Smalley.

When 94% of U.S. Jews say they are proud to be Jewish, this is nothing short of miraculous, given the Chicken Little version of history that we've been force fed for generations. I can't think of another time in Jewish history where 94% would even have had the confidence to open the door for the pollster, much less admit openly that they are proud to be Jews.

A new kind of Jewish community is being forged, one less dependent on traditional boundaries and definitions.  A wider variety of behaviors has become normative and acceptable. Fewer are being left out of the big tent - including those who are non-observant, intermarried, gay, people of color or not halachically Jewish.  This is scary to many, but the train has left the station.  And not just here.  The reigning Miss Israel is of Ethiopian background, and the 2013 winner of Israel's version of "The Voice" was an Israeli Arab.  This is the year when the Women of the Wall finally broke through that glass Chuppah, and when Israeli women refused to sit in the back of the bus.  The Sharansky plan to create space for pluralistic, egalitarian prayer at the Kotel was yet another example that the Jewish message of inclusiveness, the mandate to love the stranger, is winning out.

In the U.S., that message was embodied this year by Edie Windsor, her lawyer Roberta Kaplan and the three Jewish Supreme Court justices, who together overturned the Defense of Marriage Act and set the country on a new track where marriage equality has not only become imaginable, but inevitable.

The Chicken Littles will point to evidence that younger Jews are rejecting denominational labels (like young Americans of all religious backgrounds), and many are fleeing ritual, synagogue affiliation and organizational involvement.  Theirs is more of a Judaism-by-choice, a cafeteria Judaism where God and tradition are no longer the only items on the menu.

It's interesting that only 39% of Pew's "Jews by religion" claim that God even exists. But 42% of Jews who claim to be of "no religion" attend Passover Seders, and many attend High Holidays services - those occasions when the Jewish Message is most powerfully reinforced.  Something very tangible is keeping even the most assimilated Jews in the Jewish orbit at a time when ethnicity and nostalgia have lost their pull.  And for many whose ancestors long ago left the fold, something is pulling them back.

Pew indicated that the Holocaust has enduring power for American Jews.  But for Pew Jews, the lessons of the Shoah emphasize resilience, hope and loving the stranger, not fear, shame, hatred, revenge and despair.  Seventy years after Auschwitz, our mourning has dissolved into pure, constructive remembering.  We are moving on.  Pew painted a picture of a Jews who feel welcome in their neighborhoods and are unscarred by bias (fewer than half - 43% - feel that Jews face discrimination).  In fact, Pew Jews think several other groups face more bigotry than they do, including, wonder of wonders, Muslims.

Amazingly, post Holocaust Jewry has never abandoned its basic human capacity for kindness, even as we continue to struggle with the God who allowed Auschwitz to happen, and who allowed 20 children to die in Newtown, hundreds of lives to be shattered in Boston and 1127 to die in a decrepit Bangladesh clothing factory and nearly 6000 in a Pacific typhoon.  So we struggle with God, but struggling with God has always been a central feature of the Jewish Message.

The defining battle taking place in the Jewish world right now is not between Orthodox and liberal, because the same struggle rages within each of the movements too.  It is the battle between justice and love, strictness and acceptance, between exclusivity and inclusivity, between keeping out and welcoming in.   In 2013, the pendulum tilted toward love.

In the Sh'ma's opening paragraph, the one that begins "You shall love," it states that "these words shall be on your heart."

Why "on" your heart and not in it?

"We should at least keep these words "on" our hearts, for everyone has a time when his heart opens, and if we have kept the words on our hearts, then they will be ready to fall in, in that short moment of openness."

In 2013, our hearts opened just slightly, just enough for that divine message, the one imploring us to love, to sink in.

It was a very good year. 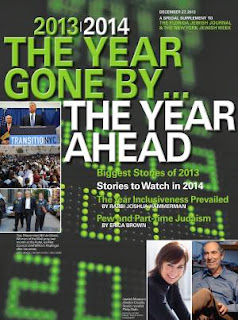