Shabbat-O-Gram - Why Shabbat Across Stamford Is so Important, Purim 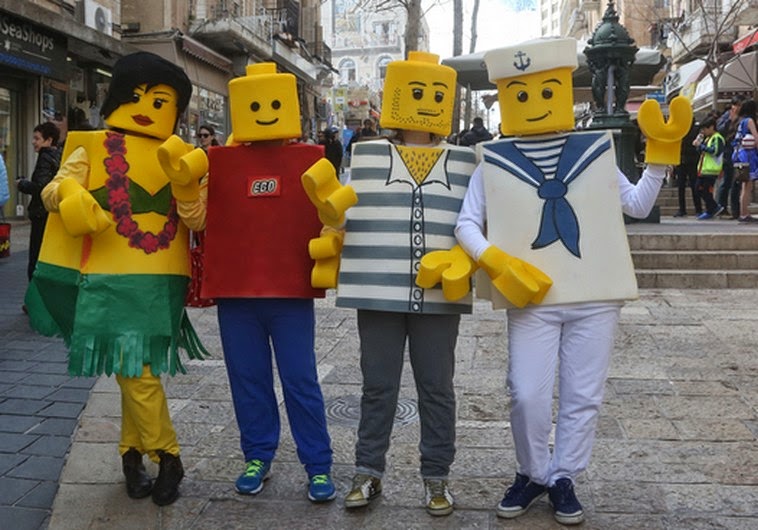 Purim in Jerusalem 2015 - The Lego Family

This week, I should also say, in memory of Leonard Nimoy of blessed memory, "Live long and prosper." I am reminded of that saying every day. Right outside my office sits an antique from early 19th century Philadelphia, a blessing chair that we use for brisses, namings and even some weddings.  The hand position is that of the ancient priestly blessing, which Nimoy used as a model for his Vulcan salute on Star Trek.  The threefold priestly blessing essentially expresses a desire that the recipient of that blessing live long and prosper.  You can read his rabbi's eulogy here and a moving tribute by Letty Cottin Pogrebin.

Happy Purim!  Last night was nothing less than a Purim miracle for us.  In between the snowstorms, one day of warm rainy weather, just enough of a break to enable at least 200 people to be here for the megilla reading and carnival.  My thanks to everyone who made it possible.  This is the link to the photo album (the album can be accessed by link only).  Special thanks to our photographer Dan Young.  More photos will be added in the near future - send yours to rabbi@tbe.org.   Meanwhile, wend your snowy Purim away by reading Purim spoof sections from The Jerusalem Post, The Forward (50 Sheitels of Gray") and The Jewish Week (Deflated Matzah Ball Scandal).  Or if you are in a more scholarly mood, see these halachic discussions on:Why do Ashkenazic Jews Eat Hamentashen on Purim? Or Just How Drunk Should a Jew Get on Purim?  Also see Purim Articles from the Hartman Institute. And click here for an article about Purim's origins.  And since the great mitzvah of Purim is to hear the entire Megilla (which we read in its entirety last night), you can do that online here.  For those who might be interested, I have some brief Purim-related reactions to the current debate over Iran on my blog.  There is excellent analysis online from a variety of perspectives.  It behooves us all to be thoroughly informed.

Post Purim, we look forward to the National Yiddish Theater - Folksbiene event on March 19, as we honor the memory of Hesh Romanowitz by celebrating the wonders of Yiddish culture. Read this interview with director Zalmen Mlotek to find out more.  Also, by now you are aware of our new LGBT group - see flyer here and tell anyone who might be interested that we need to have rsvps today so that we can inform the facility.  On a related subject, this coming Tuesday at 7:30, the last of my Hot Topics for Cold Months will cover Marriage Equality.  Gay marriage is a hot topic these days everywhere from Alabama to Israel's elections to the Supreme Court.  We'll explore how Conservative Judaism has "evolved" on this topic.  Needless to say, this class is open to everyone. And do plan to come to our Interfaith Seder on March 26.  Topic - Befriending the Stranger: Fostering Peace in a Hostile World.  Invite your Jewish and non-Jewish friends!

Also see last week's excellent B'nai Mitzvah commentaries from Emma Ostrovsky and Ben Goodman - and mazal tov to this week's B'nai Mitzvah (and their families), Sam Teich and Sarah Broder. .  We'll have a chance to greet them at our very special Kabbalat Shabbat service this Friday night featuring musical guest (and new TBE favorite) David Bravo. Mazal tov also so Jeannie Kasindorf and Craig Price, who are being honored by the JCC this weekend

Stamford's Historic "Shabbat Across the Bow" - Some Reflections

Next Friday, March 13, Jews will gather in over 500 locations for the annual happening that has come to be known as "Shabbat Across America."  But in only one community, ours, will congregations ranging across the denominational spectrum from right to left come together for this event.  True, Hillels do this kind of thing routinely, as do utopian gatherings like Limmud, and small, isolated communities where there is little choice.  But otherwise, according to the organizers, we're it and the press is taking notice. Nearly 300 people have signed up thus far, and the number is climbing.

THE DEADLINE IS TOMORROW (FRIDAY) SO GET YOUR RESERVATIONS IN NOW! CLICK HERE TO REGISTER.  WE LIKELY WILL HAVE TO CLOSE OFF REGISTRATION FOR SPACE PURPOSES.

Please note that we will NOT have a Friday night service here that night (the 13th); anyone wishing to attend the service at Rippowam that night without staying for dinner and the lecture will be able to enter without charge.  But I highly recommend registering for the whole evening.

So now, some reflections on why this is so important and how we got here.

It is nice - and unusual - to live in a community where Jews get along so well.  (Believe me - I've seen it all here and compared to other Jewish enclaves like, say, New York or the Knesset, we get along well).  I'm grateful to our Board of Rabbis, our local cantors and UJF for taking the leadership on this, and to Linda Spilka, the chair, and our newest UJF staff member Marcia Lane (who is herself a cantor) and to the hard working, visionary committee.  A very special shout out to Rabbi Elly Krimsky, formerly of Young Israel in Stamford who also works for NJOP (which has been running Shabbat Across America for over 20 years).  This was Elly's idea and we ran with it.  He continues to tell us that we are doing something that absolutely no other community is doing.

As Board of Rabbis president, I'm proud but also slightly sobered at how difficult it is these days to bring Jews together to celebrate something near and dear to us all - Shabbat.  There is still a prevailing notion, even here, that wherever two Jews dwell, there are three synagogues, one for each to belong to and one that neither would be caught dead in.  That's why Shabbat Across Stamford will be so important.

But S.A.S.has not been easy to achieve.  They say God is in the details, so allow me to share some details of our deliberations as we prepared for next Shabbat.  Nothing was left to chance.  This will give you a glimpse into the possibilities for true Jewish unity, circa 2015.

Even though we'll be eating, singing and learning together, we won't be praying together.  There will be two services, one a traditional davvening in the Carlebach style, and the other using instruments, with a more progressive and egalitarian feel.  We could have opted for a many more service options (my preference, Synaplex style), but for the first year, we decided to keep it simple.

There is no way we could have had just one service.  That ship sailed decades ago.  Few non-Orthodox Jews would want their female clergy to sit passively in the women's section.  Neither would the Orthodox want it to be egalitarian.  So in two large rooms not far apart, two large groups will be singing the exact same prayers (more or less), but separately.

We'll be located on the side of town where most of the Shabbat walkers live.  That was a no brainer.  The hotel on Summer would have been nicer, but it was booked.  We'll all light candles together to begin the experience, at the traditional candle lighting time, of course.  The food will be kosher - another no brainer.  Aside from the progressive service, there will be no instrumentation or microphones used.  No money will change hands and we'll ask people to turn off of their phones.

We found a speaker everyone could agree on - not an easy accomplishment.  Rabbi Joseph Telushkin fits the bill perfectly.  But his talk will steer toward issues of common concern, primarily personal ethics. The word "Iran" will not pass from his lips, nor will there be talk about Israel's elections, or his most recent book on the Rebbe.  We'll stick to consensus issues - and presumably loving your neighbor is a consensus issue.  (It probably isn't these days, but let's pretend).

Other decisions were not so easily made.  One would think it would be easy to eat together.  The blessings before the meal are more or less shared by all, and singing is a universally lovely thing, right?

Well, not completely.  Some feel the "Eyshet Chayil"  (Woman of Valor) passage, traditionally recited on Friday nights,is sexist and condescending.  Others think it is integral to the whole experience.  So we'll be introducing that selection, along with an array of family blessing options, and leave space for all participants to choose what to do at their tables.

Does that mean that people will need to sit only at tables with others of their ideological ilk, where they will be the most comfortable?  We won't assign seats, but we'll encourage people to spread out and make new friends.

I tell you, this 'aint easy!

The Kiddush and Ha-motzi are known to most, but the Grace after Meals is not.   Neither are the traditional table songs.  Some felt that their congregations would feel patronized and uncomfortable if too much time was spent on these less familiar aspects of their Shabbat experience.  Other voices suggested that this would be a good time to learn them.  But what they were forgetting is that many non-traditionalists still do Shabbat every week, just not as traditionally, and why should they be told that their Shabbat is somehow less authentic?

Was it always this hard to being Jews together?

And can a woman lead those songs?

When I arrived in Stamford, the female cantor of our Reform synagogue could chant a memorial prayer on Yom Hashoah in an Orthodox shul.  Not anymore.  The right has gotten righter and the left lefter.  In such a polarized environment, what can we do to please everyone?  So, in a grand compromise, female clergy will be leading various prayers and songs, as will men, but everything will be sung in unison.

And which songs will we sing?  Generic old favorites like "Oseh Shalom" and "David Melech Yisrael," songs most everyone knows, rather than the complex traditional "z'mirot" or ideologically tinged songs like "Salaam" on the left and on the right, anything remotely suggesting that the messiah is here so let's rebuild the temple now.

There is no way to please everyone, but our prime goal is to emphasize unity and mutual respect.  That goal supersedes everything else, including teaching how to "do" Shabbat.   For this experiment to succeed, everyone needs to be equally comfortable - which means, in fact, that everyone will be at least slightly uncomfortable.  We all will need to, at some point, enter that third synagogue.  While some may bristle at this idea, Shabbat Across Stamford is based on the premise that nobody's Judaism is less authentic than his or her neighbors - or at least less deserving of respect.

Is it worth it?  Ask me on the 14th.  But given the splits that have made Jewish unity a remote pipe dream, we feel it's important to remind ourselves that we remain, on some level, family.  So on the 13th, no one will be completely satisfied but over 300 of will share our dissatisfaction together, and we'll be very happy doing it!  For us, Shabbat Across America will be a Shabbat Across the Bow, a last gasp attempt to forge Jewish unity.