Joshua Hammerman
We learn in Pirke Avot, “There is no person who does not have his hour.” On a Shabbat morning in early June, a remarkable young man will ascend to the Torah to become bar mitzvah in my synagogue, on the very same pulpit where his bris took place 13 years ago. His name is Jewels Harrison.
Because of his degree of autism, Jewels’ capacity for speech is very limited, but he has found new ways to sing God’s praises. In only a short amount of time, Jewels has become an accomplished pianist. He doesn’t read music, but is able to hear and reproduce it in detail. Innovative rows of pictures and symbols helped him identify and associate songs to play.
For his mitzvah project, Jewels has been performing at small parlor recitals, raising money for programs that will benefit other kids with special needs. His playing is extraordinary for any child his age, but especially for one who has spent so much of his life with very limited ability to communicate.
To hear Jewels play is to hear the shepherd boy’s flute in the iconic chasidic tale of the Baal Shem Tov. Moved by his first exposure to the powerful Yom Kippur service though unable to read or understand the liturgy, that boy prayed in the manner that he knew best. The congregation was aghast and looked to evict the boy, until the rabbi indicated from the pulpit that those shrill sounds of the whistle were able to pierce the heavens so that the prayers of the entire congregation might ascend.
Jewels is also preparing to lead many of the prayers of the service with his voice. Through hard work and much patience, he is going to do just fine, but for the hundreds who will be attending, perfection will not be pertinent. What will matter is that we bear witness to Jewels’ resounding statement that every human being has his hour, every life has infinite value, and everyone is equal in the eyes of God.
You may have heard of the recent cancelation of a bar mitzvah for special needs children in Rehovot, Israel, because it was to be held in a Masorti (Conservative) facility. The mayor insisted that the service be held at an Orthodox synagogue. The irony here is that some traditional synagogues do not allow such children to come up to the Torah and say the blessings. There is a notion in Jewish law that those with severe disabilities are not “of sound mind” and therefore are not eligible to take on public responsibilities like being a witness, or, more to the point, representing the congregation in leading services. Despite these restrictions, even very traditional rabbis are increasingly recognizing the dangers of labeling special needs or physically disabled children with a broad brush.
In their book, “Practical Medical Halacha,” Dr. Fred Rosner and Rabbi Moses Tendler state that Jewish law urges those with special needs “to achieve their fullest potential as Jews, while exhorting society to assist them in making their religious observance possible.” In the Talmud, after all (Eruvin 54b), Rabbi Preida had a student with a severe learning disability, to the point where he needed to repeat each lesson 400 times before the student understood it. Such patience needs to be applied across the board, and to a degree, that is happening.
There is no lack of compassion for special needs children in the Orthodox world, but a general position of inclusiveness that is mandated in the Talmud; this is why the Rehovot incident is even more alarming. The mayor was willing to turn these kids into pawns to further his own political agenda.
Masorti has been running this special needs bar mitzvah program in Israel for many years. Just as Conservative Judaism has incorporated relevant contemporary data to reassess longstanding views regarding feminism and homosexuality, so did it long ago find ways to incorporate into ritual practice contemporary understandings of mental impairment and genetic disorders. As with women and gays, the purpose of implementing changes to long-held practices is to affirm the dignity of these individuals. As our sources repeat time after time, the dignity of the individual should always be paramount.
I’ve led many memorable bar/bat mitzvahs of special needs children. One of my first was for a young man with Down syndrome, who used that bar mitzvah process as a springboard to living an exemplary life in leadership and advocacy. Today, three decades later, he is often in Washington articulating his cause and lobbying for better legislation. He’s co-written a book (which became a TV movie) detailing his experiences. Had he grown up in Rehovot, God only knows if he would have had such opportunities or gained such confidence. It would have been the world’s loss.
Children with such challenges have so much to offer and often can’t stand up for themselves when mistreated. The Rehovot story is simply a disgrace, a stain on Israel and a shame for all of us. If this behavior is representative of Judaism, it almost makes me want to go back to Sinai and start all over again.
Fortunately it is not.
When I was 12, I got into the only fistfight of my life, and it was when a kid started mocking my brother, who is significantly impaired, laughingly calling him a “retard.” Nowadays there are only a few things that bring out the moral outrage in me as much as the abuse of innocent young children with disabilities.
And few things validate my decision to become a rabbi and represent the eternal message of Sinai more than seeing children like Jewels ascend to the Torah, piercing the heavens with a prayer so intense and pure that it just might save us all.
Rabbi Joshua Hammerman is spiritual leader of Temple Beth-El in Stamford, Conn. 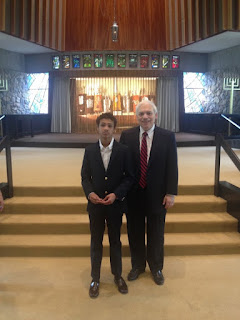 Email ThisBlogThis!Share to TwitterShare to FacebookShare to Pinterest
Labels: disabilities, Jewish Week "On One Foot" articles