The Shabbat Announcements are sponsored by Dayna and David Patashnik in honor of their son, Andrew, becoming a Bar Mitzvah. 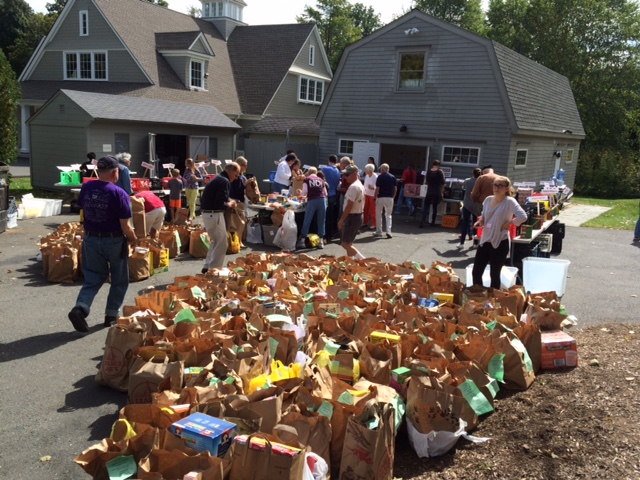 Some of the over 700 bags collected in our High Holidays food drive,
the vast majority from TBE

Mazal tov to the Patashniks on Andrew's bar mitzvah this Shabbat.  We'll also be celebrating the ufruf of Jami Shapiro and Scott Fener.  Mazal tov to them and their families!

This is a time of deep concern for the situation in Israel. Over the past week, numerous incidents have taken place, primarily stabbing and rock throwing,resulting in the deaths of Nahmia Lavi and Aaron Benneta in Jerusalem, along with Rabbi Eitam Henkin and his wife Naama, who were killed after being ambushed in their car.  This attacks are horrific and inexcusable.  There have also been reprehensible reprisal attacks, by Jews in Dimona and elsewhere.  The situation threatens to spiral out of control.  We pray that calm will be restored as soon as possible.

My son Dan, who is working with a group promoting Arab-Jewish coexistence,blogged this week about visiting Jerusalem on Simhat Torah.  He wrote:

In the end, I'm proud that I went to Jerusalem for Simchat Torah, and I'm proud of all the work I will be doing soon in Lod to promote a peaceful and stable society in Israel. Hopefully one day, through efforts such as mine designed to affect coexistence between Jews and Arabs, terrorism and violence in Israel will just be in the history books and never incorporated into the lives of innocent civilians. The principal of the Arab high school I visited today said something I found very wise. She said that children who throw stones don't have hope and know nothing but fear, and these children can only be cured through education. I truly hope that my work in Lod can help provide Arab and Jewish children the education they need to know that conflict is not the solution, and it is possible and necessary for both sides to coexist peacefully.

His organization, the Yahel Israel Service learning project, is worth reading about (and liking on Facebook).  Check out the page - you'll even see some pictures of Dan... like these:
At a time when it things seem so hopeless for reconciliation and security in Israel, our community offers a chance to do something.  Our interfaith council's proposed journey to Israel will give us a chance to learn first-hand about the challenges over there and to demonstrate to them how reconciliation happens over here.  See the proposed itinerary  and flyer and plan to join us this Tuesday evening at 7 at the Fish Church on Bedford St.  And tell your friends, especially those of other faiths.

"Go and Study"
When the sage Hillel gave his famous declaration of the essence of Judaism while standing "on one foot" the part everyone remembers is "What is hateful to you do not do to your neighbor."  But there's a second part that is usually left out.  Still on one foot, he continued, "The rest is commentary.  Now go and study."

Wed. at noon - Lunch and Learn: Untangling the Psalms

Wed.  at 7 (at Temple Sinai) Introduction to Judaism

And Thursday at 7:30 PM - we'll be studying Rabbi Joseph Telushkin's "Code of Jewish Ethics."  When Rabbi Telushkin came to our Shabbat Across Stamford last winter, a number of people asked that we have a class on this topic.  Well, your wish is my command!

Last week's Sukkah Hop and Bark Mitzvah could not have gone any better.  Scroll down to the bottom of this Shabbat-O-Gram to see the photographic evidence, featuring some of TBE's  canine congregants.  Everyone was well behaved - in fact, the dogs seemed to love the attention, especially when I blew the shofar and we had our "hakafa" around the sukkah, led by my very proud Bark Mitzvah boy.  You can see a video of it here.  Maybe it was the cantor's stirring rendition of Psalm 150 that soothed them, as we sang "All who have breath praise You, Halleluyah."  It all made me realize how  our community cannot really be complete unless we include our four legged congregants.  All week long, Crosby has been running to the backyard whenever he goes outside, looking for his friends, perhaps still sniffing them, and remembering what may have been the greatest day of his 13 (x7) year life.
Creationism and Evolution: Can They Get Along?

Last week I discussed the spirituality embedded in fossils, and our bar mitzvah,
Chase Brownstein, expounded upon his interest in paleontology.

This week, as if on cue, the Torah brings us back the Creation story and the book of Genesis.

I'm a fan of the website Religious Tolerance.org.  I found there the following chart, which points out the apparent conflicts between Genesis and evolutionary theory.

Comparison of 1st creation story with the theory of evolution:

The differences, while substantial, do nothing to shake my belief that the two narratives are complementary.  Note that I said complementary, not compatible.  Yes, we can go as far as to say that days in Genesis might well have been measured in eons rather than hours.  And yes, there is a stunning symmetry in the fact that humans are the last beings created in both accounts.  And yes, the Big Bang can be said to echo the statrting point of Genesis.  But the Torah account never was and never will be intended to describe scientific fact.

It's a shame that both in this country and Israel, reactionary and literalist forces have made this such a controversy, when, as I see it, Genesis and evolution can easily co-exist as complementary rather than conflicting stories.

Given the newest discoveries in DNA research, Darwin's theories on evolution have now been nearly universally accepted by the scientific community. Even Pope Benedict gave it his "hechsher." The evidence of our evolutionary ancestry is written all over the human genome. Intelligent Design has been discredited - notably in trials in Pennsylvania and Ohio. But that doesn't mean God is out of the picture.

There are those who are very concerned that accepting Darwin's notion that humanity is an accident of nature would be a bad thing for morality. They claim that if you teach kids that they are evolved from apes they are going to behave like murderous animals.

I guess if Darwin hadn't come around, there wouldn't have been 318 mass shootings thus far in 2015.

Prof Kenneth Miller, a biologist at Brown and bestselling author, disagrees with the Creationists on evolution's role on morality. The core of the Creationists' argument is that evolution is driven by mistakes. And it's true that evolution is driven by mutation. "But imagine an organism that never made these mistakes," Miller says. "We think of mistakes as being bad, but if you have no mistakes, you have no mutation, you have no evolution.  What's going to happen to an organism that replicates its DNA perfectly every time? It's not going to survive. So by what standard are we calling these mistakes?"

In evolution, perfection is the road to extinction. The path to survival is the path of growth, of change, of shattered patterns.

Maybe evolution is not a mistake of nature, Miller suggests. Maybe it is, in effect, the "design" of nature, the way nature is supposed to work. Somehow, and we don't know how, something happened that drove that first amphibian to take a big gulp of air and climb ashore. Somehow, at some point, something drove that first bird to flap its wings and soar.  Somehow, at some point, a pair of chromosomes melded together - we know which ones they are - marking the evolution from ape to human. Maybe it was random, maybe it wasn't, but either way, one can easily fit a model of God into this scenario, not a God who micromanages every detail of the universe, but who created a process of flow and change that we call evolution, which reflects the will of the Creator.

One could easily make the claim that evolution is simply teshuvah writ large. Just as we make mistakes and grow from them, so does DNA. So does the universe. So does God.

I think Einstein would agree. The universe, like Judaism, has a bias for change.
Even God has evolved, at least our conception of God; it's shifted dramatically from the warrior sky God of the Bible to the Rabbis' concept of ha-Rachaman - the womb-like embodiment of love (which is also, by the way a Muslim name for God). Maimonides looked to reasoned Aristotelian thought for his God, while the Kabbalists added a sense of balance, of yin and yang, to their mystical eroticism. Arthur Green writes, "The Oneness of God, for the Kabbalists, is dynamic and flowing rather than static and unmoved." God is flowing, emanating, unfolding, and so is Creation.

God is, in fact, breath itself - the life force embodied in breath. We actually have a prayer that says just that. Nishmat Kol Chai tevarech et shimcha Adonai Eloheynu. All who breathe praise You.  To breathe is to testify to the march of life, the gift of constantly becoming, constantly growing. Even God's very name mimics the act of breathing. Yod-Hey-Vav-Hey. Pronounce it and you get the sound of breath. It's no accident. God is found in that flow of life, in the process of change, and we are created in God's image. Kol Haneshama t'halelya halleluyah says Psalm 150. The mere act of breathing is a prayer.

Conservative columnist Charles Krauthammer wrote the following after a trial where the Kansas Board of Education tried to impose anti-evolution curricula on classrooms - and lost.

"How ridiculous to make evolution the enemy of God. What could be more elegant, more simple, more brilliant, more economical, more creative, indeed more divine than a planet with millions of life forms, distinct and yet interactive, all ultimately derived from accumulated variations in a single double-stranded molecule, pliable and fecund enough to give us mollusks and mice, Newton and Einstein? Even if it did give us the Kansas State Board of Education, too."

The God I believe in is a God of change. Our lives are governed not by stagnancy but by flow. The only constant is change, and we need to adapt, constantly adapt to it. We need to Grow with the Flow. Like nature itself, we are not perfect. We make mistakes. But perfection is the road to extinction. When we become perfect someday, we'll all have become robots. Perfection is not a goal to aim for; it is an illusion to dispel.

Evolution, therefore, is completely compatible with Jewish sensibilities and belief.  And Genesis provides us with crucial lessons on growth, change and...how we have all evolved from day one.

Shabbat Shalom - and now, some photos of our highly evolved "best friends." 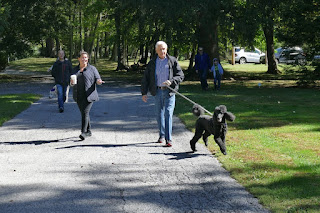 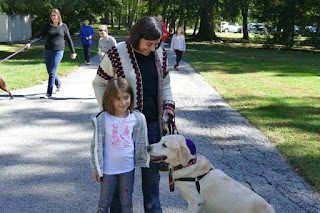 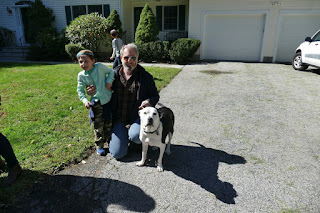 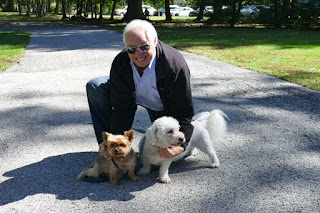 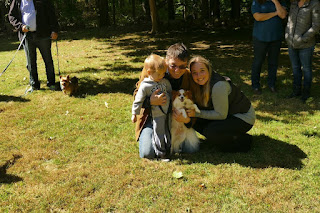 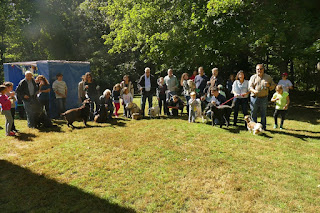 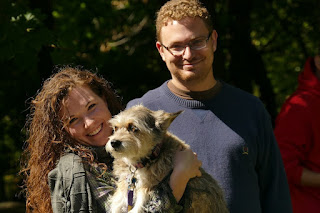 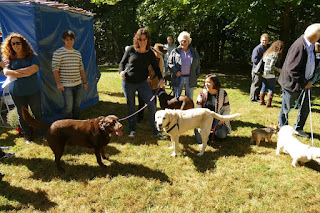 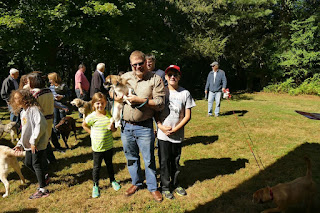 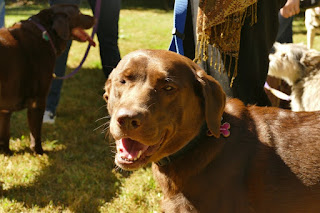 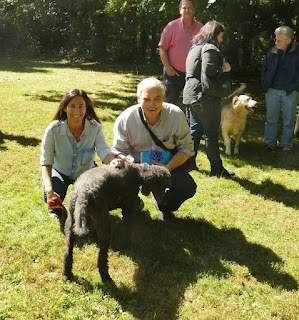 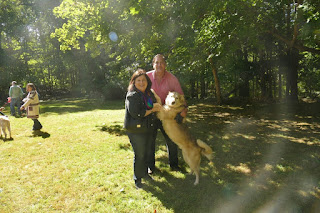 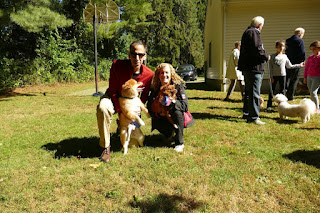 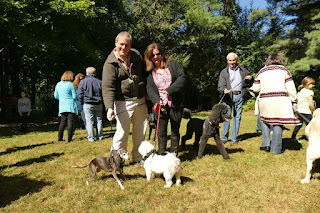 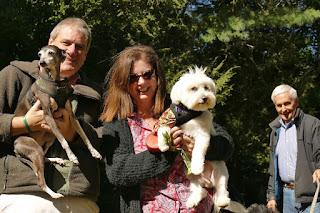 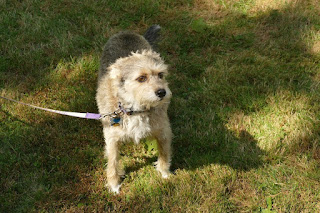 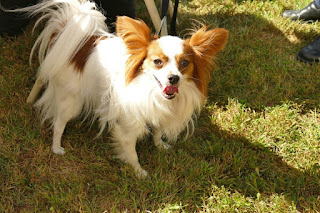 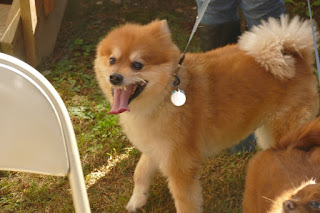