This evening we are delighted to welcome  JCC Tzahal Shalom soldiers, who will be speaking during the service.  We are grateful to our TBE host families, the Roths, Shapiros and Ebens.  And speaking of the Roths, mazal tov to Dana and Stuart Roth, who will be honored with a special leadership award at Carmel Academy's "Erev Tov" celebration.

The Jewish Heritage trip to Central Europe will now be rescheduled for early in the summer of 2017.  While we likely could have gone this summer, a significant number of people preferred next year, for a variety of reasons.  So we're working on a revised itinerary and pricing, which I hope to post soon.  The trip would be open to all ages, and I'd like especially to encourage families with teenagers to consider coming with us.  As of now, there is no community March of the Living group, as there was for a number of years, and this priceless experience (even if at a different time of year) is something that no Jewish teen should miss.  I am already looking into scholarship options to encourage families with teens to join us - including our Men's Club's new Yellow Candle program.

I am also looking into a possible congregational trip to Cuba for next winter. Please let me know if you might be interested.

Peas Process: What's the Deal About Legumes on Passover?

With Purim behind us now is the time to download the  Rabbinical Assembly Passover Guide for all your Passover hows, whys, whats, do's and don'ts.  See also my Passover "Guide for the Perplexed."  And if you are confused about the question of legumes (kitniyot), eaten by Sephardic Jews but traditionally not in Ashkenazi homes, the Rabbinical Assembly issued rulings on this topic just three months ago.  We will be discussing the Kitniyot Question as our Torah Study session at Shabbat morning services this week. 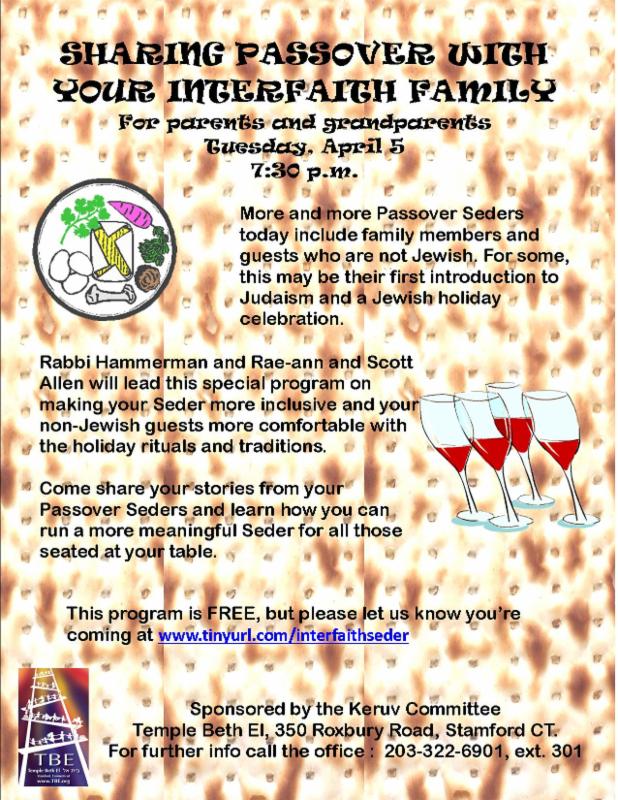 Anti-Semitism or Anti-Zionism?  The View from College Campuses

Imagine how excited I was to pick up my copy of the Jewish Forward last Shabbat afternoon, and when reading the intriguing article: 6 Jewish Students Reveal How Israel Debate Colors Campus Life; I noticed that the first of those students was none other than our own Mike Sosnick.  Mike's point is that, while there is significant antipathy toward Israel at Cornell, his campus, it doesn't come close to what he would consider anti-Semitism.  And in fact, at times he's been made to feel more uncomfortable by fellow Jews than by non Jews.

This topic has been receiving much traction lately, with the decision by University of California regents which condemned anti-Semitism, but fell short of the broad censure of anti-Zionism desired by Israel advocacy groups.

I've always felt that it is important for all our students to be prepared to discuss Israel's triumphs and challenges confidently and honestly on campus; but even more, to feel comfortable in their own Jewish skin, so that their opinions - and indeed their lives - can be shaped by a strong foundation of Jewish values.  So I'm really proud of Mike for being able to stand up proudly as a Jew wherever he has gone (and he's traveled quite far), but also to ask questions freely, even when they are hard questions.  I hope all our students know that I stand beside them on their Jewish journeys.

So now I ask our TBE collegians to join Mike in weighing in on this topic. Do you feel comfortable as a Jew on your campus, either in expressing your Jewishness overtly or in supporting Israel?  Or do you feel uncomfortable - and if so, does that discomfort stem more from external forces, such as BDS,  from professors - or from other Jews, including supporters of Israel?

Write to me at rabbi@tbe.org. 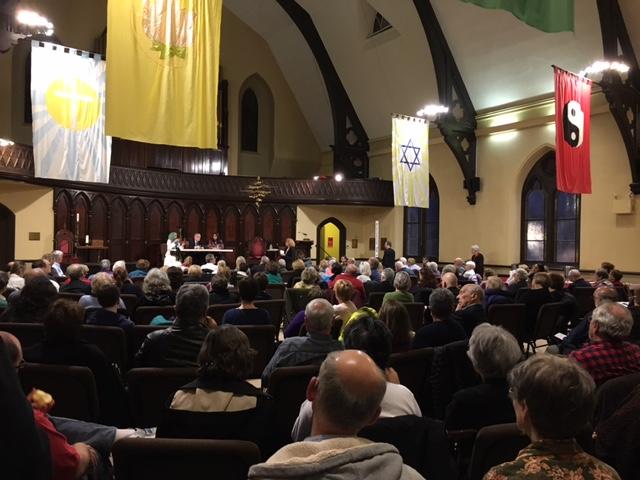 Last evening at the Unitarian Universalist Society, the community heard from three local Muslim leaders.  We were able to ask questions, including the tough questions, that many have been asking about Islam during these trying times. Perhaps even more important than the content of the responses was the SRO turnout, including many from the Jewish community.  It shows that we care and that we want to be informed.  The speakers happen to be good friends of mine - I serve with two of them on the Interfaith Council board.  They helped us to understand a few important things:

1) That the essence of Islam has been misrepresented by those who distort it for political ends, including fundamentalists, Isis and those fueling the flames of Islamophobia.

2) That moderate Muslims have been speaking out against extremism, but they have been drowned out.  The speakers cited especially the work of Duke Professor Christopher Bail in analyzing the media-aided  impact of the anti-Muslim fringe, including his recent book "Terrified." From the book's introduction: "Bail traces how the anti-Muslim narrative of the political fringe has captivated large segments of the American media, government, and general public, validating the views of extremists who argue that the United States is at war with Islam and marginalizing mainstream Muslim-Americans who are uniquely positioned to discredit such claims."

, Kareem Adeeb, one of the spokespeople, made it clear last night that the risks of speaking out are infinitely higher for moderate Muslim clergy than for others.  Adeeb himself was targeted and nearly killed three times by terrorist groups.  That makes it all the more important that leaders of other faith groups rise to defend the Muslim moderates and help them to re-frame their

faith.  It takes far more courage for Kareem to do what he does than for me to defend him.  To see the recent birth of a Reform Movement i
n Islam is a tribute not only to the courage of those initiating this step, but to the pluralistic culture of America and Canada that has allowed non-fundamentalist expressions of many faiths to thrive - including of course our own.

3) That many of the oft-cited problematic sections of the Quran have been deliberately misinterpreted by extremists and taken out of context by others.  It would have been helpful last night to have had a page of text in front of us and have the speakers address specific verses.  Still, I can relate to how an ancient sacred text can be misinterpreted over the centuries - our Bible certainly has, both by extremist Jews and by anti-Semites; and the Bible also has passages that are very problematic.  The speakers also went so far as to defend the treatment of women in traditional Muslim society.  That too needs to be fleshed out more in future dialogues.  But here again there are parallels to Judaism.  The ultra-Orthodox interpretation of Jewish law regarding women and other matters has become increasingly stringent over the past few centuries, just as Muslim society has polarized.

4) But the main point I got out of last night, and one that came through loud and clear even with a challenged sound system, as one of empathy.  For all the pain everyone is feeling with the rise of ISIS and increases in terror, the pain being felt by Muslims is at least as acute.  For not only are Muslims by far the most frequent victims of this terror (including last week's attack on children in Pakistan), but on top of it, they are facing unprecedented fury and discrimination at home, including, now, here in America.

We cannot allow Islamophobia to prevail.   As Jews, we have seen firsthand the results of unrestrained hate.  We've seen it directed against us and, regrettably, at times by us.

Let's hope that in this country cooler heads can prevail and we can work closely with the Muslim community to deepen the ties that bind us.  As one of the speakers said last night, the Muslim community is in great need, not of sanctions and suspicion, but of a hug.  And perhaps that is what last night's overflow turnout was all about.