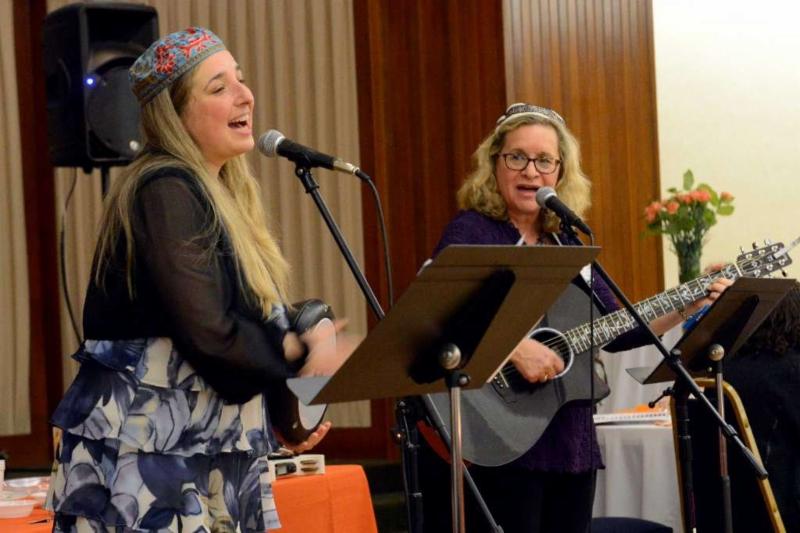 150 women (and a few male Seder Crashers) attended our fabulous Women’s Seder on Wednesday.  Click here to see the album. Thanks to Aviva Maller Photography for most of the pictures, as well as the Stamford Advocate, whose coverage can also be seen here.
SEND ME YOUR SEDER PHOTOS....
This evening at 5:30 for families, we’ve got a Chocolate Seder!  Can’t wait!  Meanwhile, send me your Seder photos, Chocolate or otherwise, to include in our TBE Seder Album.  Just as we interspersed family photos (including vintage ones) with current congregational photos for Hanukkah, we’ll do the same for Passover - and have them on display on our lobby monitor throughout the festival.  Send your pictures torabbi@tbe.org... 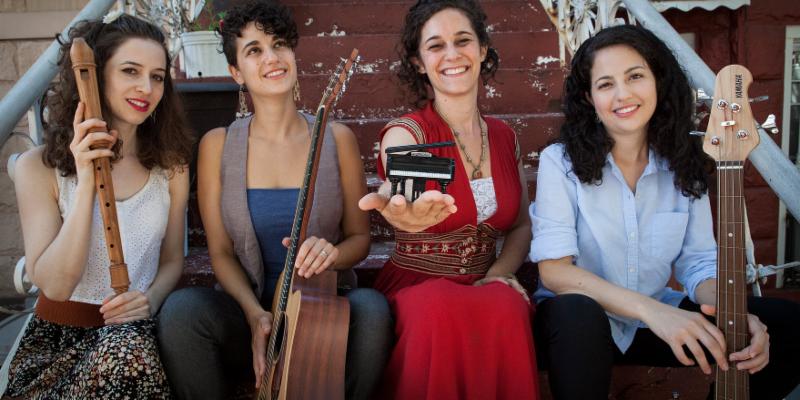 ...And join us at 7:30 tonight as we welcome musicians Ella Joy Meir on keyboard and Yonit Spiegelman on guitar; both are part of the new and up-and-coming group Banot.  They moved here after having a successful career in Israel, performing with top Israeli musicians!  Check out their website, and watch (and share) their new video.

We also are pleased to welcome Hazzan Rabinowitz here this Shabbat, following his recovery from recent surgery.  On Shabbat morning, Shabbat Ha-Gadol (the Shabbat before Passover), we have a Bat Mitzvah Encore, continuing an ongoing effort to feature teens and adults celebrating B’nai Mitzvah anniversaries by reciting their portions once again. This week we welcome back Shayna Finkel, back one year later to reprise her reading from the portion of Metzora.  Mazal tov, Shayna!
A reminder that next Friday, April 22, night there will not be a service here.  Over the past few weeks, several have asked about a congregational Seder (aside from the Women's and Chocolate varieties).  We’ve done it in years past, but in recent years interest waned and we dropped the idea.  But this is a decision that can be revisited, so let us know if you would be interested in our having one next year.  In the meantime, also let me know if you have room at your Seder for anyone who might need a place to go.
Note that we will have services on all the days of the festival, including NEXT Sat. and Sunday, the first two days of Pesach, at 9:30.  Also, this coming Friday morning after minyan, we will follow the custom of a Siyyum for the First Born, where the act of completing study from our sacred sources enables the first born to eat on what otherwise would be a fast day.  The study session will be brief - we’ll look at some of the texts involved in the Conservative Movement’s recent decision to allow the consumption of Legumes (Kitniyot) on Passover.  See the responsa and decide for yourself - here and here.
A Celebration of Women 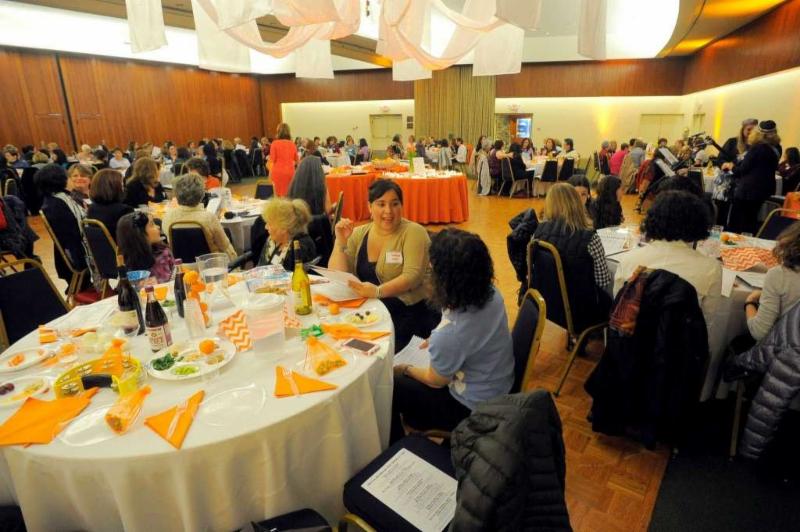 As noted above, last Wednesday night was a chance to celebrate the growing role women have played in the unfolding Jewish story.  Cantor Fishman’s unique vision was brought to stunning reality - so much so that this male Seder Crasher could not help but be overwhelmed.  Special thanks to Cantor Fishman for making it happen, as well as Cantor Debbie Katchko-Gray, as well as the hard working committee, and to Lisa Gittelman-Udi, especially for her help in the creation of the beautifully designed Haggadah.  You can download the Haggadah here for use at your Seder. 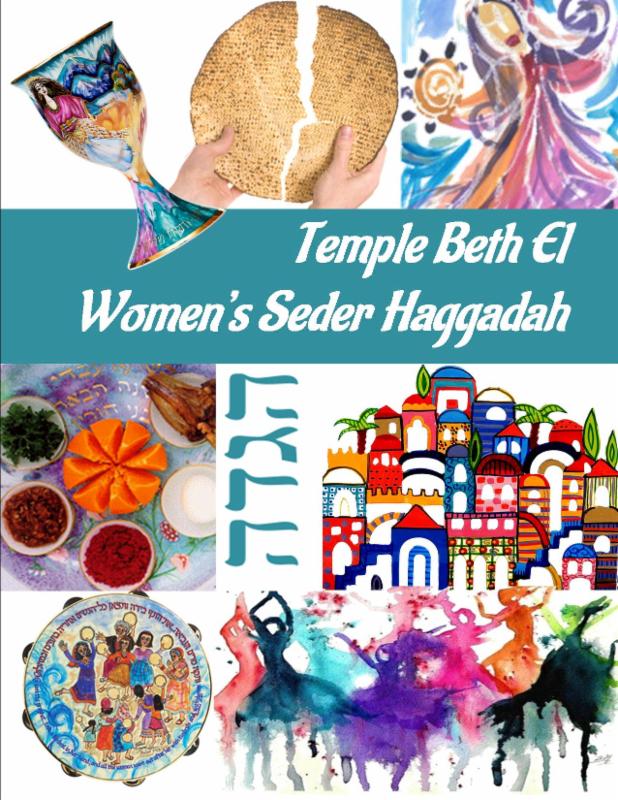 A few people have asked me when the men’s Seder will take place.  My glib answer has been that the men’s Seder’s been going on for the past 2,000 years.  That is absolutely true, but still, with our rejuvenated Men’s Club, I look forward to opportunities for men to share and learn together, just as the women did - and maybe to sing and dance together too!
But we absolutely should be celebrating the role of women.  Many old time feminists are bemoaning the fact that the younger generation doesn’t appreciate the many glass ceilings they have had to shatter in order for these youngn’s to reach a state of relative equality.  This week’s Equal Pay Day is an indication that we still have a long way to go. The feminism generation gap has been borne out especially in this year’s Democratic primaries.
For Jews, Passover, a festival so bound to tradition, is a litmus test as to how bound women still are to traditional roles.  For some - many, in fact - that might not be a problem.  But the issue is not whether women still find themselves bound to the kitchen, but whether they now feel that they have the choice not to be.
It is reassuring to see that girls in our congregation are not feeling constrained by traditional sex roles.  Last Shabbat’s bat mitzvah d’var Torah by Ava Sabloff is a perfect example of why.  Ava has so many female role models from all parts of her life, and she learns something from all of them. She also pointed out that in a year where we could elect the first female or the first Jew as President, she could put it all together to become the first female Jewish President (and one with Canadian roots, to boot).
It is striking that people seem almost lackadaisical that a woman - or someone Jewish - has a serious chance to become President.  It shows both how far we’ve come and how we’ve begun to take these enormous societal advances for granted.  Equality is something we should never take for granted; basic human rights must always be cherished.  We’ve seen that discrimination is still very much alive and well in this country.
At last Shabbat’s service, our tribute to Jewish women was played out in another way, as I asked the congregation to select their Ten Greatest Jewish Women of All Time.   They chose from this extensive list that I compiled.  If you don’t know who some of them are, that’s why God invented Google.
*** SEDER IDEA - PRINT OUT THE LIST AND VOTE FOR YOUR OWN TOP TEN.
It was interesting to see how those present narrowed the list down to ten, and then three, and finally one - our little tribute to American Idol.  Our seventh graders decided to go biblical, favoring Sarah and Miriam as two of their top three.  Anne Frank also scored highly, and Golda Meir.  A surprising addition to their pantheon was Tzipi Livni, because, as one of the students put it, “we just like the name Tzipi”.   The adults were partial to Barbara Streisand and Ruth Bader Ginsburg, with a nod to Betty Friedan.  No one took the bait of choosing from the array of Hollywood options, though I might have given a nod to Natalie Portman myself.

There are so many to choose from.  And because of the great sacrifices of those who have come before us, the future for Jewish women is as bright as the shiny kitchen floor that I just mopped.

OK... I didn't really.  But I imagined mopping it.

PASSOVER PREP
For guidance as you prepare for the holiday, check out the Rabbincal Assembly Guide andmy own "Guide for the Perplexed."
Search for and Sell Hametz
The traditional search for hametz occurs on Thursday evening, April 21.  During Hebrew School that day, we are going to engage the kids in a hametz treasure hunt around our building to make sure that we've found every crumb!  It's lots of fun.  You can download this sheet to search for hametz at home.  And to sell you hametz to me, simply fill out handy dandy form and send it back to our office.
Shabbat Shalom