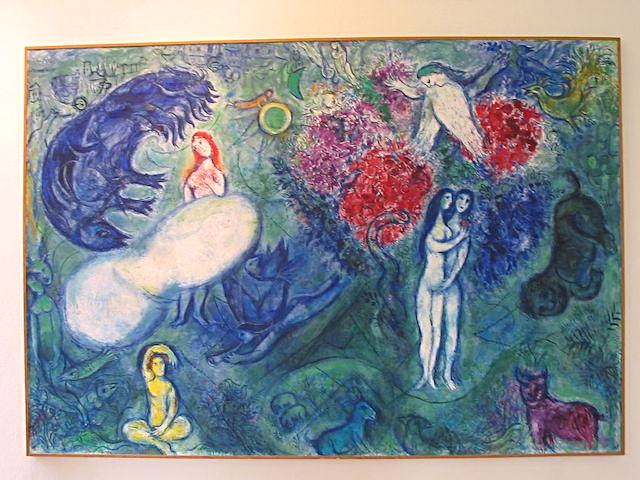 Last week I suggested that we look at this year's best movies from a Jewish lens.  In my op-ed, "Do the Jews Control Hollywood? No, but..." featured here and trending on the Times of Israel site, I proposed a new award, the Jos-cars, to determine the year's top film from that Jewish perspective.  This week, we look at "La La Land," a film whose composer is Jewish and the director is an honorary Jew.  But that's just the beginning of the Jewish connection.

I was intrigued by this study of the art of Marc Chagall and how it relates to a movie where a couple in love is portrayed literally dancing on air, floating among the stars in the Griffith Observatory.  Rabbi Jessica Brockman writes:

"La La Land" resonates as pure old fashioned Hollywood escapism, perfect for a time that many would classify as grim.  While Judaism is very much grounded in reality and the incessant need to confront evil and promote justice, there is also an innate drive for transcendence,  Shabbat is a perfect example - it's been called the Club Med of days, the antidote to civilization.  On Shabbat we float above the muck and grime of our everyday reality.

Romantic love elevates us in the same way.  We have many relationships in our lives, but suddenly, in a flash, one "takes off."  Chagall was similarly elevated during a period of tremendous upheaval and personal displacement.

Judaism celebrates those relationships and those moments, which, far from being escapist, are in fact the bedrock foundations upon which our reality is based.  After all, for Jews, the bedrockiest moment of all was/is the revelation at Mount Sinai, where, according to a midrash, (based on the verse in in Deuteronomy 4:11 stating that the people stood "under the mountain") the mountain itself floated above the heads of the Israelites.  And even God - the foundation of all reality - hovers over the as-yet unformed void at the beginning of Creation.  Before there are any words, before there is even light, there is the hovering of God, a divine dance the likes of which not even Gosling and Stone could emulate.

Our reality is in fact aspirational.  We elevate instinctively.  Some scientists  have theorized that male moths are draw to flames because flames emit the wavelengths of light given off by female moths' luminescent pheromones.  In other words, moths hover out of love.  Similarly, in the midst of the darkness, we humans have the gumption to hover toward the light.  In the midst of earthly despair, we adhere to what one might call "the audacity of hope."

So "La La Land" is not escapist in the least.  Nor is Judaism.
Posted by Joshua Hammerman